On 11 March 2018, an Airbus AS350 engine failed during a commercial sightseeing flight and autorotation was initiated. The pilot then noticed that the floor-mounted fuel cut-off had been operated by part of the tether system of one of the five passengers but there was insufficient time to restore power. On water contact, the automatic floatation system operated asymmetrically and the helicopter submerged before the occupants could evacuate. Only the pilot was able to release his harness and escape because the unapproved adapted passenger harnesses had no quick release mechanism. The Investigation found systemic inadequacy of the operator s safety management system.

On 11 March 2018, an Airbus Helicopters AS350 B2 (N350LH) being operated by Liberty Helicopters on a commercial sightseeing flight around Manhattan in day VMC and carrying five passengers made an autorotation to controlled ditching in the East River after the engine stopped. The automatic flotation system failed to inflate symmetrically and the helicopter immediately rolled over before the occupants could exit and only the pilot was subsequently able to escape. The helicopter remained underwater supported by its partially inflated flotation system until recovered and moved to a hangar the following day.

An Investigation was carried out by the NTSB. The installed image and data recorder, which should have captured imagery of the cockpit instrument and caution/warning panel, pilot inputs to the flight controls and the near-distance external environment, and which should have detected and recorded the helicopter’s position, altitude, roll, pitch, yaw, heading and the angular velocity and acceleration in all the three axes, was found to be inoperative. Its most recent recorded data were over three years old and it had evidently been inoperative since then despite an annual functional check being required in the AMM. However, useful information was available from a digital camera mounted on the ceiling of the helicopter’s passenger cabin and a smartphone belonging to one of the passengers. Smartphone videos of the accident provided by ground witnesses were used to estimate the helicopter’s touchdown point, ground track, ground speed and rate of descent rate.

It was noted that seats on the accident flight had been sold by a separate company ‘Fly NYON’ as seats on an “aerial photography flight” during which passengers would be able to take photographs while extending their feet outside of the helicopter’s removed or open doorways when permitted to do so by the pilot. This was achieved by conducting the flights with the two right side doors and the front left door removed altogether and the left sliding door locked in the open position. Passengers in the rear left and right outer and front left seats could swivel their seats 90° and the left and right inner rear seated passengers were able to leave their seats and sit on the floor at the open doors (see the illustration below).

To ensure that passengers could not fall out, each passenger was fitted with a NYONair-provided body harness/tether system attached to an anchor point in the cabin. This supplemental passenger restraint system (SPRS) was additional to and quite separate from the mandatory FAA approved lap belt and shoulder harness system. Only the latter was worn by the pilot. Each passenger also wore a headset that enabled them to hear instructions given by the pilot.

It was noted that Liberty Helicopters, an established Part 135 and Part 91 operator which was approved to operate ‘conventional’ air tours with ‘doors-on’ helicopters had been contracted to operate flights for FlyNYON since late in 2017 and the latter had supplied the harness/tether system which Liberty Helicopters had installed. However, unlike Liberty’s own doors-on tour flights, the flights for FlyNYON were explicitly operated under Part 91 as “aerial photography flights” using a longstanding exemption which allowed such flights to be operated outside the scope of the significantly greater regulatory and oversight requirements applicable to Part 135 operators as well as having the effect of excluding regulatory oversight of significant aspects of a Part 91 operation - such as the SPRS - despite the operation being clearly a “commercial revenue-passenger carrying” business.

The 33 year-old pilot involved had a total of about 3,100 flying hours experience, of which 1,430 was on type. The 30 minute ‘sunset’ accident flight was his fifth of the day during a duty period which had begun at 0930. He had been employed by Liberty Helicopters as an A350 pilot for almost two years at the time of the accident.

The flight departed from the Helo Kearny Heliport (65NJ) in New Jersey just before sunset. After initially turning south and flying in the vicinity of the Statue of Liberty with the two inboard rear passengers having removed (with the pilot's permission) their mandatory harness and moved to sit on the floor held by their PSRS, the helicopter had proceeded not above 2000 feet QNH as cleared up the East River (see the ground track illustrated below). During this time, video evidence showed that the front seat passenger had manoeuvred himself to take photographs in such a way that the loose tail of the PSRS tether attached to the back of his harness had hung down loosely near the helicopter’s floor-mounted controls. Then after returning to a more upright seated position, “his tether tail appeared taut and was extended in the direction of the floor-mounted controls”. A few seconds later, he could be seen to have “pulled on the hand grip (mounted on the helicopter’s left door frame) to adjust his seating position” and as he did so, his tether tail remained taut but appeared to “pop upward”. A couple of seconds later, as the helicopter turned towards Central Park, audio from the onboard video recorded a sudden reduction in engine noise. 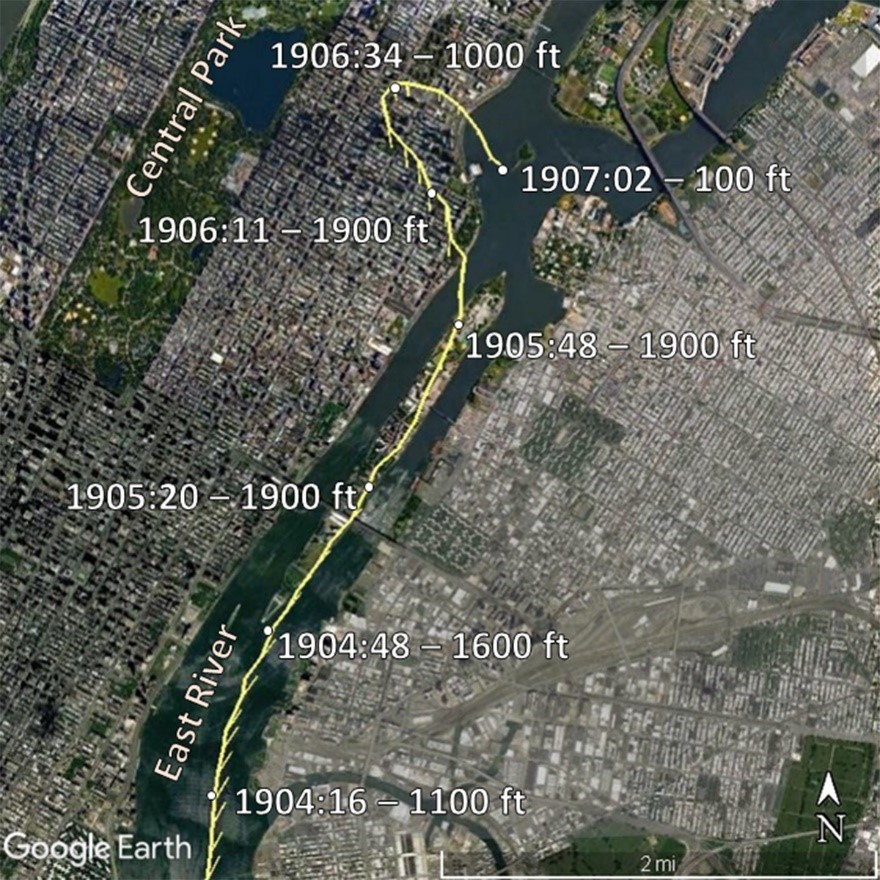 The helicopter’s ground track up the East River continued to the point of ditching. [Reproduced from the Official Report]

The pilot responded to the apparent loss of power by initiating an autorotative descent from a height of 1900 feet and, after judging that Central Park was too crowded, had commenced a right turn back towards the East River. During the descent he checked the Fuel Flow Control Lever (FFCL), one of three floor-mounted controls (see the left hand illustration below) and confirmed that it was “secure in its detent”. 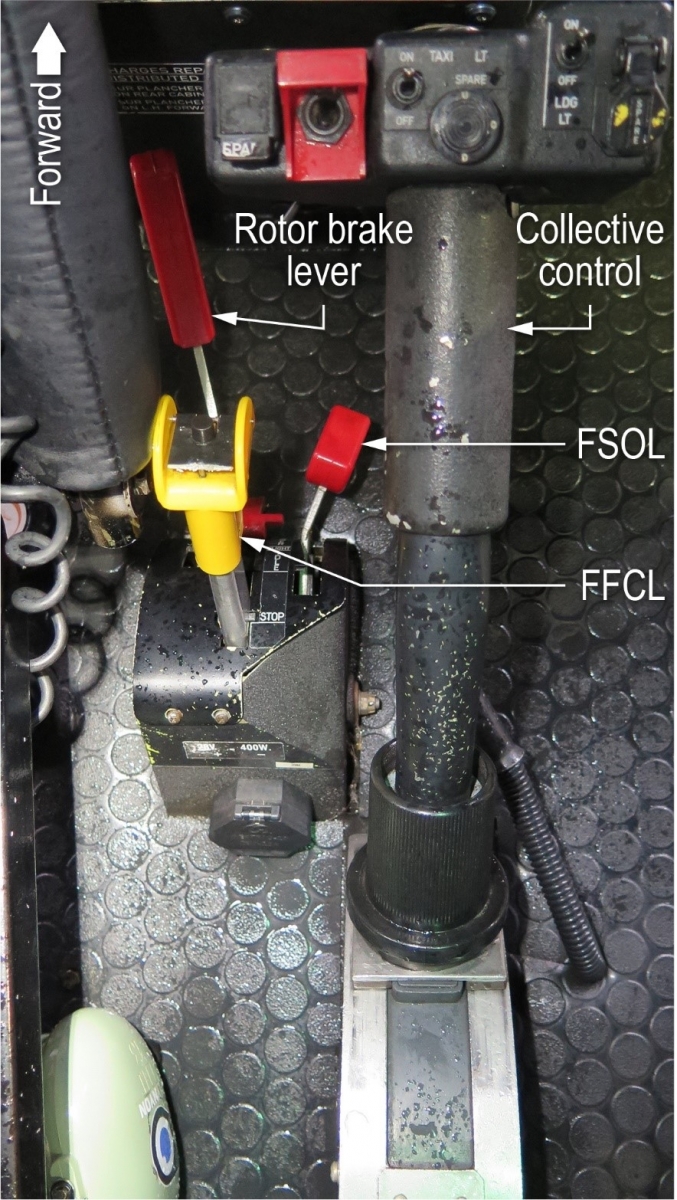 The Floor Mounted Controls. [Reproduced from the Official Report] 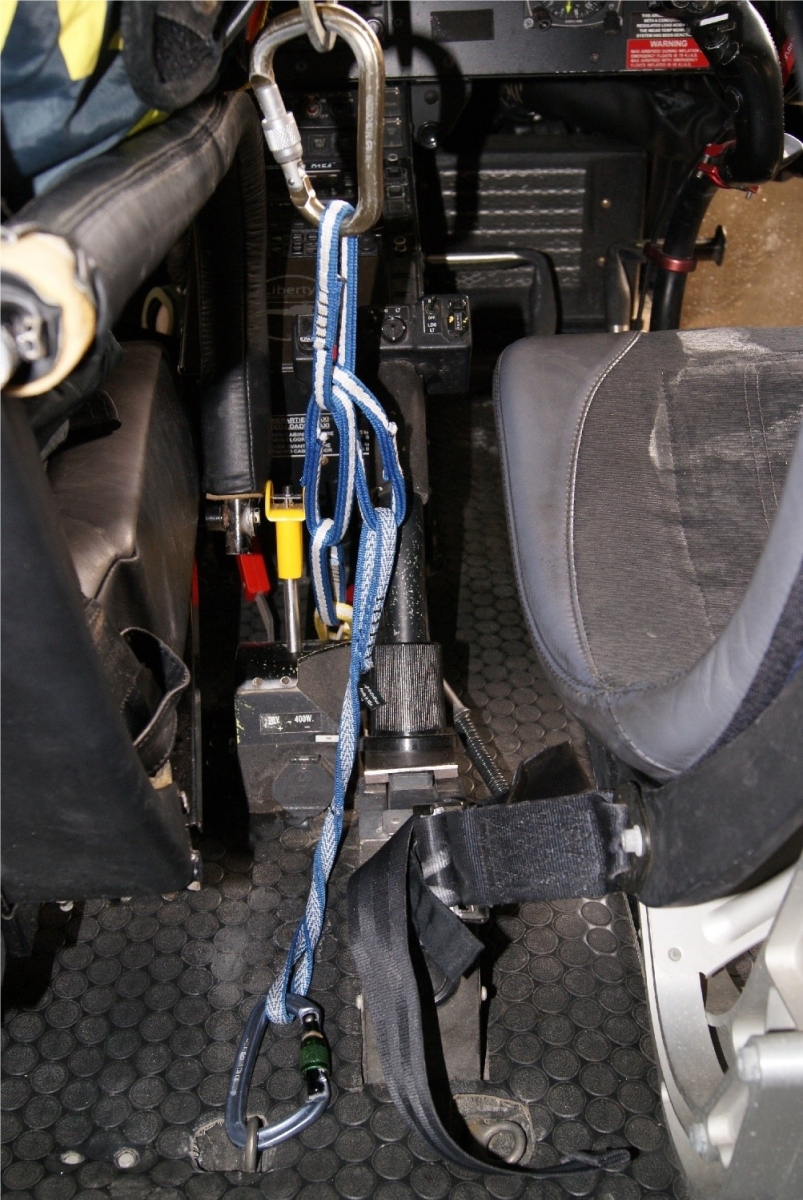 The front passenger’s tether with three excess loops hanging loose as a tail. [Reproduced from the Official Report]

Subsequently, he stated that when the helicopter was about 600 ft above the river and he was “committed to impact”, he had reached down to position the Fuel Shut Off Lever (FSOL), another floor-mounted control, to the closed position but found that it was already closed as a result of the front seat passenger’s tether tail having snagged the lever (as illustrated in the right hand illustration above) and pulled it up. He had immediately opened it and engaged the engine starter but by this time, there was insufficient time left to achieve a restart and he declared a ‘MAYDAY’ to La Guardia TWR and activated the emergency float system using the lever on the cyclic control (see the illustration below). With the helicopter about 100 feet above the water, the onboard video recorded a single ‘click’ sound followed by the noise of float deployment. The pilot stated that he had taken this ‘pop’ sound to indicate that the flotation system - three air bags at each skid - had deployed and had seen the front of both the left and right floats and had detected the extra drag their deployment had created.

Shore witnesses’ videos showed the helicopter touching down upright and in a slightly shallow flare attitude before immediately beginning to roll to the right with the rotor blades striking the water within about five seconds of touchdown and the roll continuing so that the helicopter was “completely inverted and submerged with only the floats visible” only 11 seconds after touchdown. The pilot reported that he had been fully underwater and unable to release the buckle on his own installed, FAA-approved restraint to escape. None of the five passengers surfaced and divers subsequently found that none of them had been able to release themselves from their SPRS harness/tether systems, an action which would have required them to use a cutting device in a pouch attached to their harnesses to sever the tether. 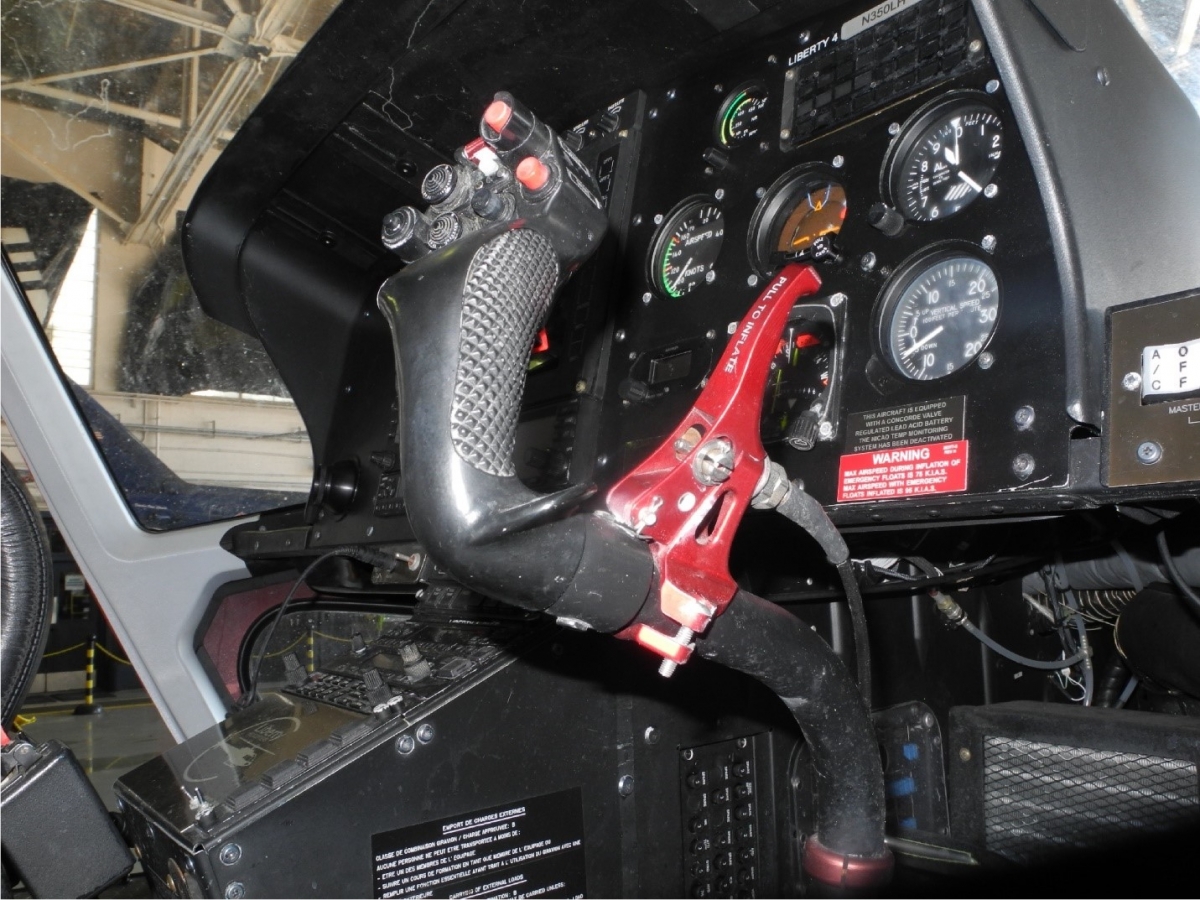 Following the accident, the wreckage was moved, still inverted, to a pier where it could be seen that three of the six floats were under-inflated and that two of these were on the right hand side (see the illustration below), which would have created the asymmetry which led to the roll on touchdown. It was noted that the AS350 B2 helicopter is not certified for ditching but the accident helicopter, which the operator used in both Part 135 and Part 91 flight operations, had been equipped with a Dart Aerospace STC-approved emergency flotation system which was designed so that the pilot could “pull the handle to fully deploy the floats using only the right hand (the hand operating the cyclic control) without letting go of the cyclic grip (similar to how a bicycle brake lever is operated without letting go of the handlebar)”. However, no description or illustration of the system or of the intended single-handed activation technique could be found and there was no specification of the lever force required to fully activate the system. 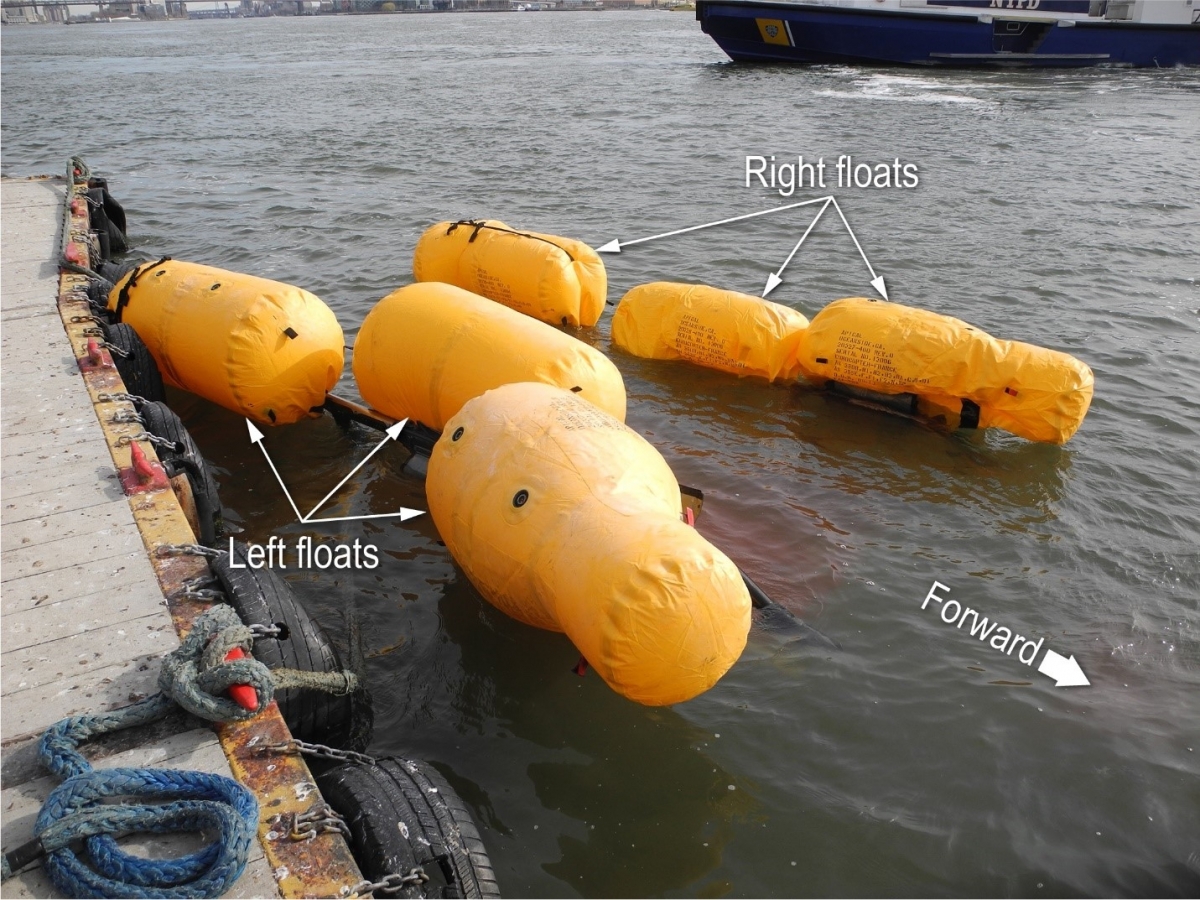 The emergency floats visible above inverted, submerged wreckage. [Reproduced from the Official Report]

The pilot stated that he had believed that the system was fully activated after the ‘pop’ he had heard but examination of the system found it to be have been fully serviceable when deployed but with only one of the two installed compressed nitrogen gas reservoirs having discharged its contents into the floats. Testing was able to demonstrate that the activation lever had not reached its full travel when the first ‘pop’ had occurred and that a second such ‘pop’ was likely to have occurred when the other gas reservoir discharged. It was concluded that the sequential rather than simultaneous operation of the two reservoir discharge valves in this case was a consequence of a slightly mis-positioned activation cable junction box where the activation cable was attached to the two individual reservoir valve release cables.

The Findings from the Investigation as formally documented included, but were not limited to, the following:

The Probable Cause of the accident was determined by the Board as “Liberty Helicopters Inc.’s use of a NYONair-provided passenger harness/tether system, which caught on and activated the floor-mounted engine fuel shutoff lever and resulted in the in-flight loss of engine power and the subsequent ditching".

Three Contributory Factors to the accident were identified as:

Two Contributory Factors to the severity of the accident were also identified:

A total of fourteen Safety Recommendations were made as follows:

The Final Report of the Board was adopted on 10 December 2019 and subsequently published.