On 26 December 2019, an Airbus Helicopters AS350 on a commercial sightseeing flight over the Hawaiian island of Kauai impacted terrain and was destroyed killing all seven occupants. The Investigation concluded that the experienced pilot had decided to continue the flight into unexpectedly encountered cloud contrary to Company Policy. Contributory factors were identified as the delayed implementation of a Hawaiian aviation weather camera programme, an absence of regulatory leadership in the development of a weather training program for Hawaiian air tour pilots and an overall lack of effective regulatory monitoring and oversight of Hawaiian air tour operators’ weather-related operating practices.

On 26 December 2019, an Airbus Helicopters AS350 B2 (N985SA) being operated by Safari Aviation on a day VFR commercial sightseeing flight for six passengers flown by a single pilot over the Hawaiian island of Kauai entered IMC north of Kekaha and was subsequently in collision with terrain. It was destroyed by the impact and subsequent fire with no survivors.

An Investigation was carried out by the NTSB. The accident helicopter was not equipped (and was not required to be) with a CVR, an FDR or an image recorder. The NTSB was informed by the operator that the accident helicopter had previously been equipped with a video camera/recording system, but that it had been removed “in preparation for the installation of an upgraded system”. The installed Garmin GNS 430 device which held navigation and terrain data which included an obstacle database was located but when the related NVM was examined, it was found that the relevant databases were several years out of date (database currency not being a requirement for VFR operations). Video recordings from a number of camera-equipped helicopters operating the same standard route were available.

The 69 year-old pilot involved had first been employed by the operator in 2007 but by the time of the accident he had become an instructor and was also the Chief Pilot and Company Check Airman. His (successful) application for the second class medical certificate current at the time of the accident reported a total of 14,000 hours flying experience of which 475 hours had been flown in the previous six months. The most recent entry in his personal log book was dated 2012, however the operator’s Assistant Chief Pilot “estimated that the accident pilot flew about 40 hours per month”. His most recent line check, which required demonstration of the ability to manoeuvre the helicopter solely by reference to instruments and to return to VMC following an inadvertent IMC encounter, was completed just over five months prior to the accident in the same helicopter.

It was noted that FAA records showed that a random drug test administered by the operator as part of its required drug and alcohol testing programme in May 2010 had detected evidence of cannabis use by the accident pilot. Thid led to his Private Pilot Licence (PPL) and Commercial Pilot Licence (CPL) certification being temporarily revoked before being regained in July 2011 after he had successfully completed a substance abuse program and related requirements. For the duration of the period without a current licence, his employment as a pilot at the operator was terminated although it was continued for other ground duties.

The accident pilot was one of two pilots covering the operator’s sightseeing flights from Lihue airport on the day of the accident. All his eight planned flights were, subject to maintaining VFR, intended to follow a standard route involving a clockwise loop around/over Kauai (see the illustration below) and take around 50 minutes. The accident flight was his eighth and final one for the day. 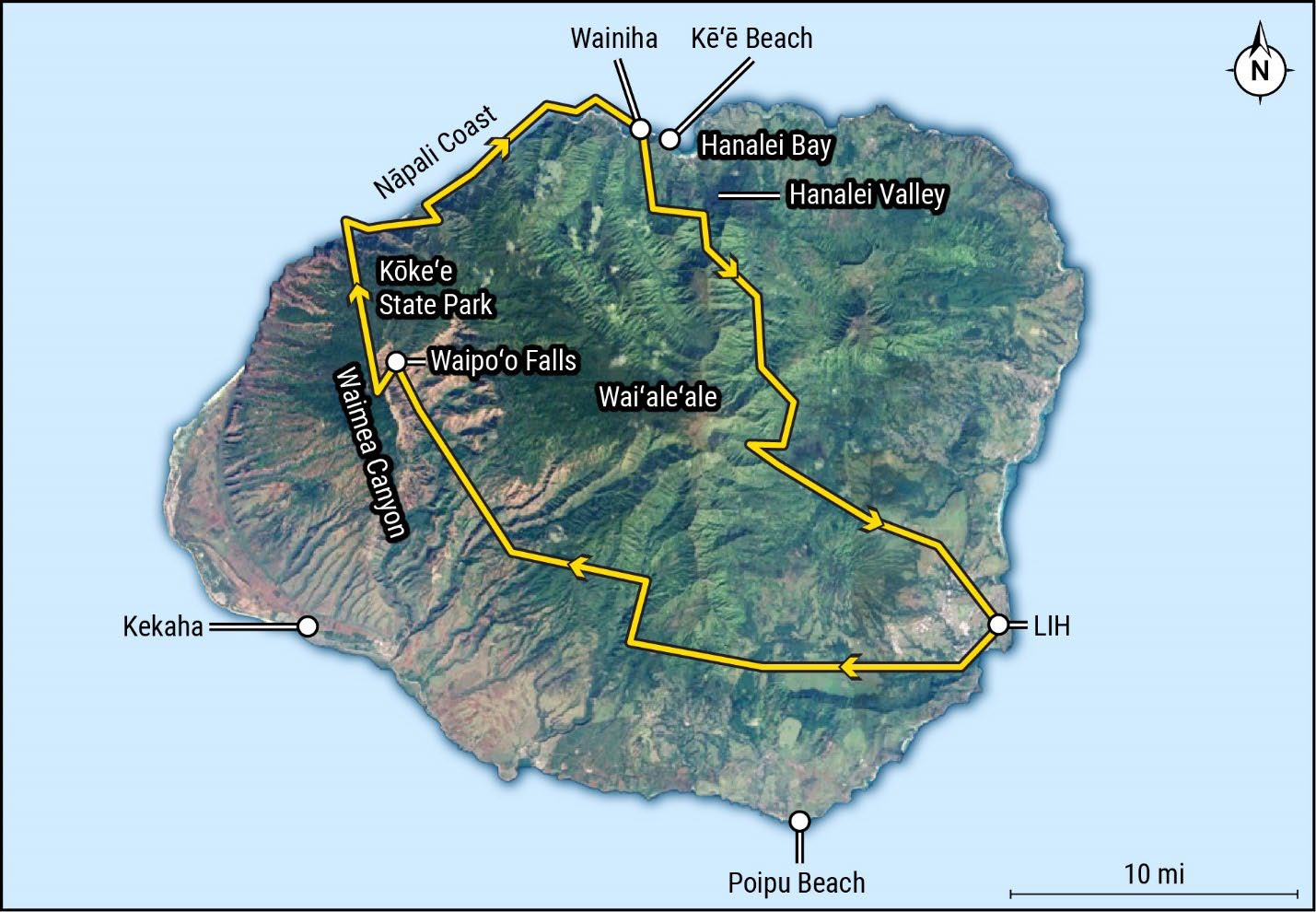 The standard sightseeing route around Kauai out of Lihue. [Reproduced from the Official Report]

Limited information was available about the flight, although the ATC radar recording showed that a return which corresponded to the likely ground track of the accident flight which tracked “south then west and northwest” before the returns ceased eight minutes later at the expected limit of the radar coverage for low-flying aircraft in that area. Nine minutes later, the flight would have been expected to have reached the north end of the Waimea Canyon (near Waipoʻo Falls) after which the normal route would have been to initially continue southwest through the canyon before exiting over its west rim between the Lua Reservoir and the Upper Microwave tower (see the illustration below) and, after flying between the two, then taking up a north northwest track to reach the Nāpali Coast. 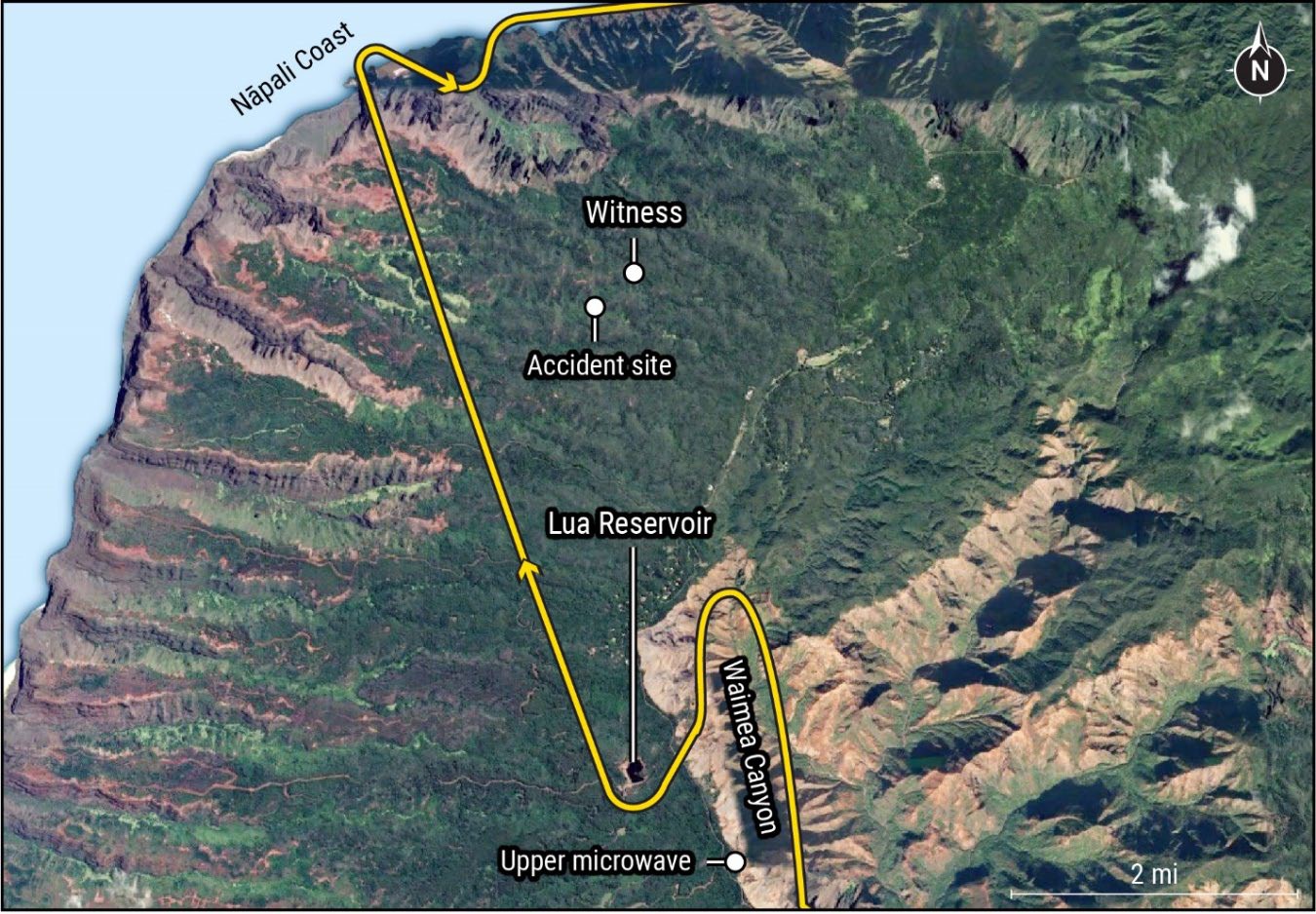 The accident location and presumed intended track. [Reproduced from the Official Report]

The pilot of another operator’s sightseeing flight estimated he was about five minutes behind the accident helicopter when he heard its pilot routinely announce his required position report at the Upper Microwave Tower over the radio. He stated that at that time, whilst he could see adverse weather at the north end of the Waimea Canyon, he had presumed that as the accident flight had continued, there must have been a way through. Initially, he decided to continue as planned to see whether he could also go that way and informed his passengers that the Canyon would be the next site. However, his helicopter was camera-equipped and video showed that his tour arrived at the north end of Waimea Canyon about 1657 and encountered visible moisture in the canyon. He reported having exited the canyon near the Upper Microwave Tower but after continuing on the usual route for about two minutes and encountering “reduced visibility and rain had decided to reverse track rather than continue towards the Nāpali Coast”.

A witness (see their position on the illustration above) who was hiking along a trail slightly to the east of the usual route which was at approximately 3,100 feet amsl “in dense fog” reported that heavy rain had been falling for about 45 minutes when he had first heard a helicopter nearby for about 30 to 50 seconds before then hearing “a strange squealing noise” after which he could no longer hear any further noise from it. He stated “that fog was so dense he could see only about 20 feet in front of him”.

Soon after the time the accident flight should have arrived back at Lihue, the accident aircraft operator’s Director of Operations (who also owned the company) was advised by company ground staff that the flight was overdue and that “company flight locating procedures began”. The other company pilot who had been flying that day had completed his flights but after he was told that the other flight was overdue, had subsequently returned to his helicopter and flown north where he reported having found “adverse weather” ahead and had concluded that the other helicopter would have landed somewhere to “wait it out”. He had then climbed to try and gain radio contact but was not successful.

The following morning, a rescue helicopter team spotted the wreckage in wooded, mountainous terrain at an elevation of about 3,000 feet amsl about half a nautical mile east of the standard tour route and about a quarter of a nautical mile to the southwest of where the trail witness had been standing when he heard the helicopter noise stop.

An inspection of the site showed that the helicopter had struck the steeply sloping north face of a 3000 foot high ridge in level flight just below its crest with damage consistent with a low-energy impact.

Detailed assessment of the on-site evidence suggested that either the helicopter was turning within the valley of which the ridge formed one side or was descending it into from an unknown initial altitude when impact occurred. It was considered that it would be plausible to explain either scenario as the result of controlled manoeuvring with inadequate visual reference or an in-flight loss of control at a low height above terrain.

It was not possible to establish exactly what had happened let alone determine the detail of exactly “why” because of the lack of information about the helicopter’s flight track or any other parameters. In particular, this made it impossible to determine whether the accident pilot had maintained controlled flight after encountering IMC or had lost control before terrain impact occurred.

Several sightseeing tour pilots following the same route that day indicated that the Kauai Island weather had been favourable for their flights for most of the day, but that low cloud and rain “began moving onshore from the northwest and affecting that side of the Island about the time that the accident flight departed”. Two pilots for another helicopter operator advised having diverted their flights away from the Waimea Canyon in order to avoid adverse weather there about 15/20 minutes before the accident appeared to have occurred.

These pilots and others familiar with the weather patterns on Kauai advised that weather conditions “can change rapidly in certain areas of the island and that pilots often cannot anticipate what the weather will be like until arriving at that location” so that tactical decision making on flight routing is often required if VFR flight cannot be continued without a deviation from the standard route.

In respect of the accident pilot’s relative risk aversion, the Investigation talked to his supervisor, his subordinates, his peers and FAA Inspectors and all considered he had been very knowledgeable about the Kauai weather, had evidenced good judgment when making weather-related decisions and had often advised other pilots to avoid taking weather-related risks. It was noted that on one occasion, he had “even asked an (FAA) Inspector to commend another pilot for having decided to land a helicopter off-site to avoid continuing a tour in deteriorating visibility”.

The Investigation found that FAA oversight of operational safety in the (substantial) multi-operator Hawaiian helicopter sightseeing industry was inadequate. It was particularly concerned at an apparent “lack of leadership and expert guidance in developing cue-based weather training” which their research had found “was effective for improving pilots’ skills for accurately assessing and avoiding hazardous in-flight weather conditions” when in VFR flight. It was also concerned at the delay in full FAA implementation of the already-agreed Hawaiian weather camera system given the support it will provide to pilots’ weather avoidance decision making. It was also considered obvious that an effective OFDM system would be of particular value in sustaining operating standards in single pilot commercial air transport operations in such a challenging VFR-constrained environment.

The Probable Cause of the accident was formally determined by the Board as “the pilot’s decision to continue flight under visual flight rules into instrument meteorological conditions, which resulted in the collision into terrain”.

Two Contributory Factors to the accident were also identified as:

A total of ten Safety Recommendations were made as follows:

Ten Other Safety Recommendations already issued as a result of other Investigations were re-iterated in the light of the findings of this one as follows: