On 19 October 2013, an ATR42 freighter departing Madang had to reject its takeoff when it was impossible to rotate and it ended up semi-submerged in a shallow creek beyond the airfield perimeter. The Investigation found that loading had been contrary to instructions and the aircraft had a centre of gravity outside the permitted range and was overweight. This was attributed to the aircraft operator s lack of adequate procedures for acceptance and loading of cargo. A lack of appreciation by all parties of the need to effectively mitigate runway overrun risk in the absence of a RESA was also highlighted.

On 19 October 2013, an ATR 42-300 freighter (P2-PXY) being operated by Air Niugini on a cargo flight from Madang to Tabubil as flight PX2900 failed to get airborne from runway 25 at Madang in normal day ground visibility. A rejected take off from high speed resulted in an overrun through the perimeter fence and into a shallow creek where the aircraft became semi submerged and the right wing caught fire. The three pilots on board escaped through the flight deck roof hatch and were uninjured but the aircraft sustained substantial damage. 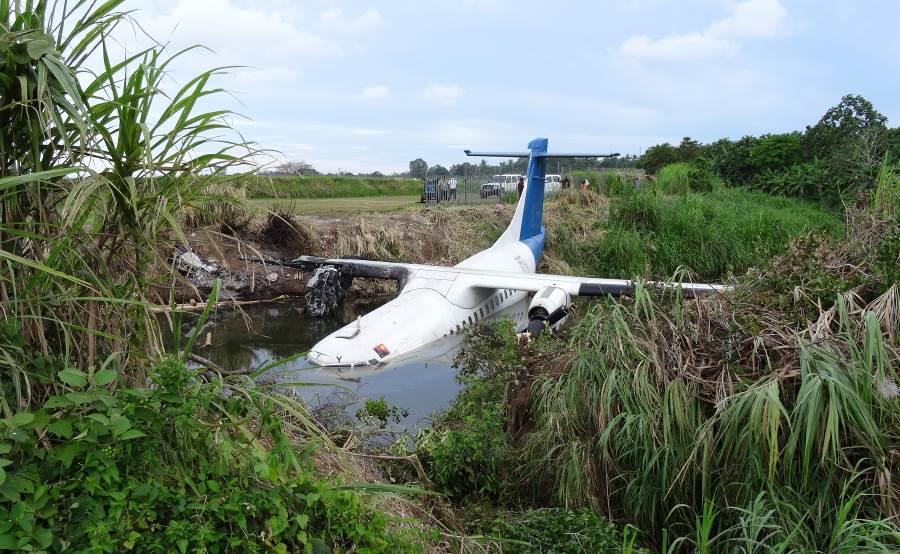 The aircraft partially submerged in the creek showing fire damage to one wing. Reproduced from the Official Report.

An Investigation was carried out by the Papua New Guinea Accident Investigation Commission (AIC). The FDR and CVR were both recovered and data from both were successfully downloaded.

It was established that the aircraft had just recently arrived from Port Moresby, after which inbound cargo had been unloaded and new cargo, consisting exclusively of cigarettes packed in large cardboard cartons and destined for both Tabubil and the eventual destination Port Moresby had been loaded. The full 1,569 metre length of runway 25 was used for takeoff and everything was normal until the aircraft commander, who was PF for the flight, attempted to rotate at Vr, which the crew had calculated to be 102 KIAS. He reported having found the controls very heavy in pitch and was unable to pull the control column back as normal. FDR data indicated that after approximately two seconds, and after the aircraft had travelled 1,090 metres including 160 metres since the Vr call had been made, action was taken to reject the takeoff with the power levers being retarded to full reverse pitch and maximum braking applied.

By the end of the runway, the aircraft speed was 35 knots and it departed the paved surface and passed over a shallow embankment at its end after which it breached the perimeter fence right wing first which caused the aircraft to yaw to the right and enter a creek just beyond it at an angle of approximately 45° to the runway centreline. The wing/fence collision broke open the fuel tank in the right wing and it caught fire and the fuselage became semi submerged upon entering the water just beyond it. The pilots escaped through the flight deck roof hatch and were uninjured. 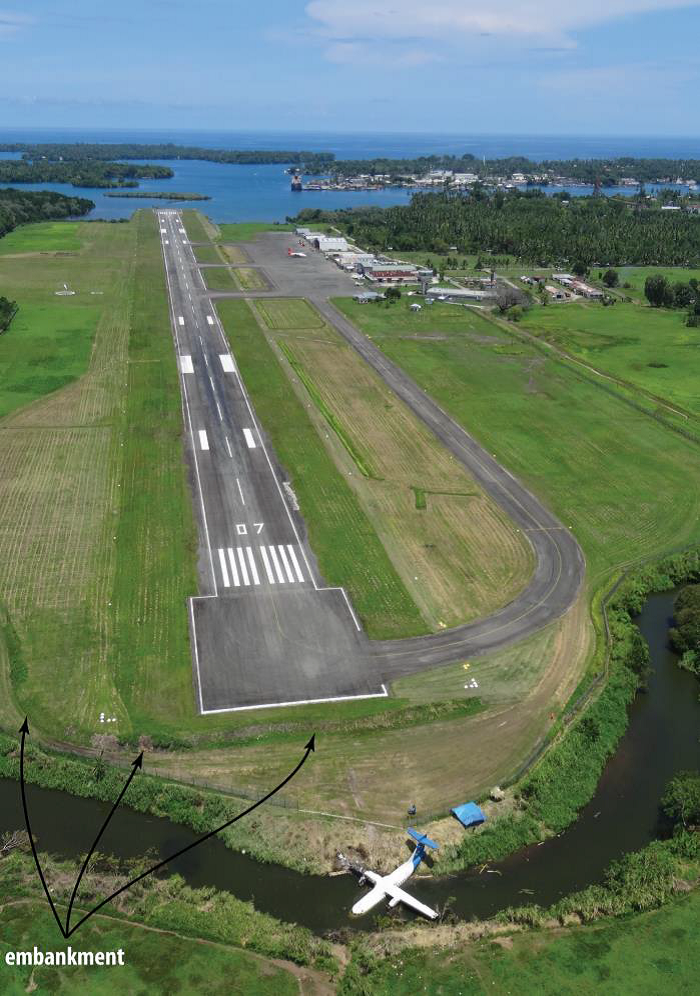 An aerial view of the aircraft in its final stopping position. Reproduced from the Official Report.

The Airport Fire and Rescue Service arrived quickly and tackled the right wing fire with foam and water. Their supply of extinguishant was exhausted before the fire was fully out but it did not spread to the inner wing. Almost immediately, local people began to enter the aircraft through the escape hatch and the rear right hand door, which was above water, and began to remove both the cargo and items from the flight deck.

In addition to the damage to the right wing and destruction of both propellers during the impact sequence, further damage was caused by the partial immersion in salt water and during the salvage operation to recover the aircraft to dry land the right engine fell off into the water. 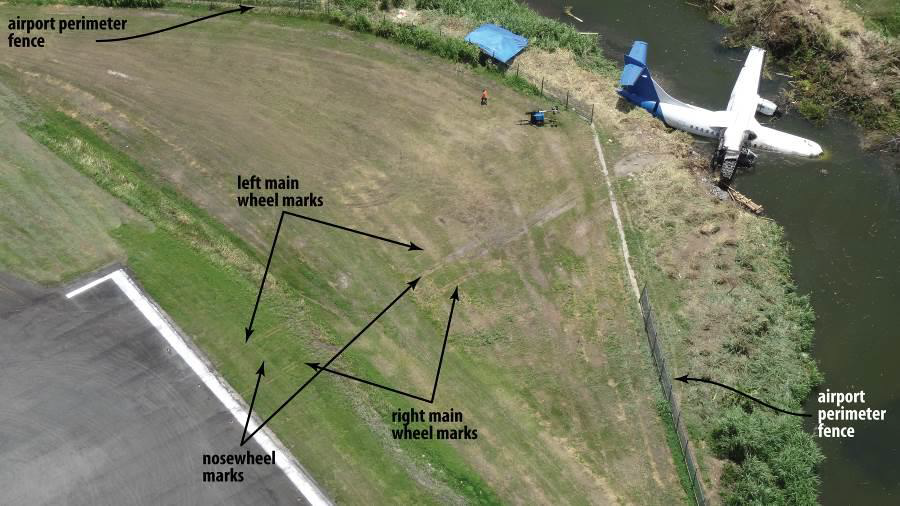 Another aerial view showing how the perimeter fence orientation affected the aircraft's ground track. Reproduced from the Official Report.

No evidence was found of any airworthiness issue or any matter related to the crew performance of the attempted takeoff that could have contributed to the accident. The focus of the Investigation therefore turned to the loading of the cargo at Madang and to issues relating to the operation of the airport and the regulatory oversight of it, the latter particularly in respect of the risks of runway use in the absence of a RESA.

It was found that all inbound cargo had been offloaded at Madang and a consignment of 400 cartons of locally-manufactured cigarettes was awaiting the aircraft at Madang for shipment to Tabubil and Port Moresby. On completion of loading, only 330 cartons had been accepted on board and 70 which could not be accommodated remained at the airport. Each carton was found to have been “of approximately similar dimensions and weights”. The Captain determined that because of limited fuel availability at Tabubil, it would be necessary to restrict the load out of Madang to 3,710 kg. The First Officer stated that he had given the Operator’s ground handling personnel the weight to be loaded in each of the six bays and provided a corresponding diagram. The cartons were then loaded on the (unchecked) assumption that each one weighed 12 kg. In fact, based on average weights for the three types of cartons loaded provided by the shipper, British American Tobacco (BAT), who had manufactured and packed the cartons, the average weight of a carton was just over 13 kg which represented a load which was 593 kg in excess of the 3,710 kg recorded on the loadsheet and 343 kg above the ‘Maximum Permitted All up Weight’.

It was not possible to examine the distribution of the cartons as loaded, because about a third of them had been removed before the Investigation had begun. However, information from one of the shipper's staff who had been closely involved in the loading was used to help work out the number of cartons which had actually been loaded in the most forward bay. This was estimated to have been the maximum allowed in the bay instead of the significantly reduced number which had been given in the loading instructions for that particular bay by the crew because of the need to keep the aircraft trim within limits. The effect of this difference was that the weight in that specific compartment was likely to have been more than three times what was shown on the loadsheet - 1,136 kg instead of the 350 kg - as well as being 136 kg above maximum load permitted in that bay under any conditions.

It was noted that the ‘Delivery Note’ provided by BAT with the cartons for shipment gave the gross and net weights for each carton as the same and the Company advised the Investigation that “it does not record a difference between gross and net weight as it relies on the freight handler to properly weigh and charge (them) for the goods entrusted to them to transport”. The Investigation concluded that “this inaccurate listing of weights likely contributed to the aircraft being overloaded”.

It was found that at the time of the accident, Air Niugini did not have sufficiently robust ground handling procedures for the loading of freight on their ATR 42/72 aircraft and in particular, “there was also no robust procedure for the flight crew to check load distribution”. The Investigation was informed that such procedures as were used were those of the European aircraft leasing company which had provided the aircraft and these were not available to the Investigation.

It was concluded that given these findings, the safety oversight of the ATR42/72 procedures and operations of Air Niugini by the PNG Aviation Safety Regulator, the Civil Aviation Safety Authority (CASA) “was inadequate”.

The Investigation estimated that having departed the end of the runway at 35 knots at its calculated deceleration rate, the accident aircraft “would have needed 278 metres to stop in the absence of frangible material in a RESA”. Considering the wider operational risk presented by runway overruns at Madang (and elsewhere in the country) because of the absence of a RESA, the Investigation noted that because Fokker F100 passenger aircraft regularly operate at Madang, the ICAO Annex 14 Aerodrome Reference Code for the airport is ‘C’. This means that the applicable ICAO Standard includes the provision of a 90 metre RESA and since the runway at Madang did not have one at either end of runway 07/25, it did not conform to this Annex 14 Standard. It was also noted that the PNG Aviation Safety Regulator, the Civil Aviation Safety Authority (CASA), had not notified ICAO of the difference in its own RESA requirements from those of Annex 14 in accordance with Member States’ obligations under Article 38.

It was found that whilst the single fire-fighting vehicle had arrived at the accident site promptly and its crew had been able to extinguish the wing fire, the available water and foam had been fully used to achieve this. It was therefore considered that there would have been no likelihood that any aircraft fire larger than this could have been dealt with. It was noted that the AIP stated that Madang was a Category 5 airport but also that Fokker F100 and Bombardier DHC8-400 aircraft regularly operated there and that such operations require at least a Category 6 airport which meant that rescue and fire-fighting services did not meet ICAO Annex 14 requirements in respect of both the available quantity of foam/fire suppressant agent and the need to have a dry chemical powder, suitable for extinguishing hydrocarbon fires, available.

It was also found that although there had been no consequences in the case of the investigated accident, the Madang Airport Emergency Plan (AEP) also did not satisfy the corresponding minimum requirements for such Plans in ICAO Annex 14. These included the capability for water rescue and for periodic exercises to confirm the effectiveness of the Plan. The Investigation also noted that the Madang AEP Manual provided to the AIC by the National Airports Corporation (NAC) “appeared to be a draft document (which had) no document number, approval or issue date, and no version reference” and could therefore not be considered to be a controlled copy.

The cause of the accident was recorded as an overloaded aircraft which resulted from Air Niugini’s lack of robust loading procedures and supervision for the ATR 42/72 aircraft and the inaccurate weights provided by the cargo consignor/client company.

Four Other Factors identified during the course of the Investigation which, whilst not causal to the accident, “should nevertheless be addressed with the aim of accident and serious incident prevention”, were as follows:

Six Safety Recommendations were made during the course of the Investigation as follows:

The responses of the recipients of these Recommendations and the AIC assessments of them as known at the time of publication of their Report of the Investigation are included in that Report.

The Final Report was completed on 14 October 2015.