On 13 December 2017, control of an ATR 42-300 was lost just after it became airborne at night from Fond-du-Lac and it was destroyed by the subsequent terrain impact. Ten occupants sustained serious injuries from which one later died and all others sustained minor injuries. The Investigation found that the accident was primarily attributable to pre-takeoff ice contamination of the airframe with an inappropriate pilot response then preventing an achievable recovery. It was found that significant airframe ice accretion had gone undetected during an inadequate pre-flight inspection and that there was a more widespread failure to recognise airframe icing risk.

On 13 December 2017, ATR 42-320 (C-GWEA) being operated by West Wind Aviation on a scheduled domestic passenger flight from Fond-du-Lac to Stony Rapids as flight WEW282 descended into trees shortly after taking off from Fond du Lac in night VMC and was destroyed by the subsequent terrain impact. Ten occupants sustained serious injuries from which one later died and the remaining fifteen occupants all sustained minor injuries. 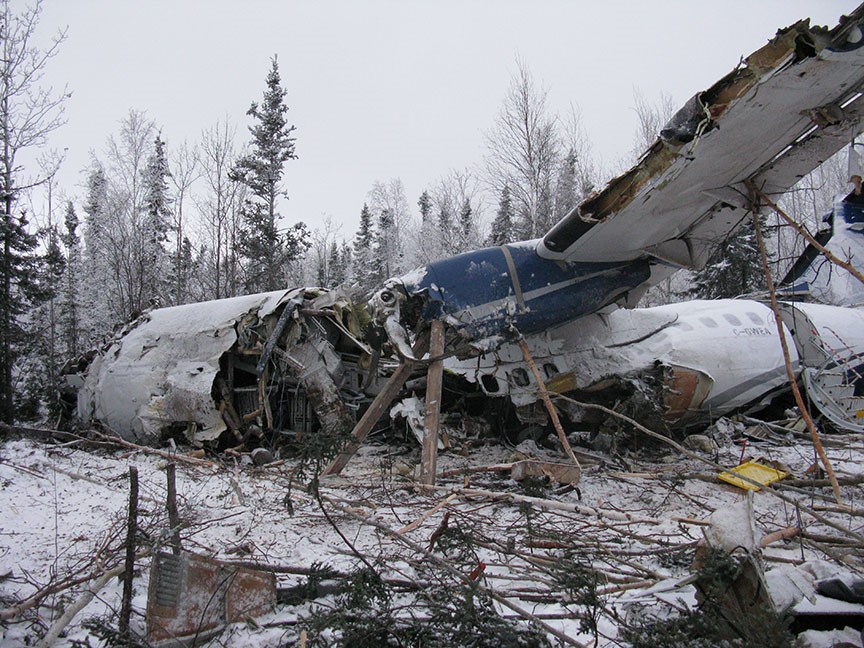 The wreckage of the front of the aircraft. [Reproduced from the Official Report]

An Investigation was carried out by the Canadian TSB. The FDR and CVR were removed from the wreckage and their data was successfully downloaded.

The aircraft Commander was acting as PF and was a Captain who had a total of 5,990 flying hours experience including 1,500 hours on type with approximately 400 of those in command. He had initially been employed by West Wind in 2010 and had been an ATR 42 First Officer between November 2015 and July 2017 at which point he was promoted to Captain on the ATR42. The Co-Pilot was also an ATR42 Captain and had a total of 15,769 hours flying experience which included 7,930 hours on type. He had initially been employed by West Wind as a BAe Jetstream 31 First Officer in 2000 before beginning to fly the ATR42 as a First Officer in 2005 before being promoted to Captain on it in May 2011. He had been rostered to act as a Co-Pilot because of the absence of an available First Officer. It was established with confidence that flight crew fatigue was not a factor relevant in the accident.

The crew duty began with an uneventful flight from Saskatoon to Prince Albert which, after a one hour turnround, was followed by a flight from there to Fond-du-Lac. During the approach there, they encountered some in-flight icing, and activated the pneumatic boot leading edge de-icing system. However, neither this nor the anti icing system were capable of preventing ice accumulation on unprotected surfaces. The crew were aware of this but were unconcerned given that no handling anomalies were apparent and on that basis appeared not to have considered that any ice remaining from the flight followed by a turnround in significantly sub zero temperatures would be severe enough to have a significant effect on aircraft performance. In fact, FDR data showed that the effect of residual ice during the final stages of the earlier approach into Fond du Lac had already been to decrease lift performance by 10% and increase drag by 28%.

The turnround at Fond-du-Lac before departure to Stony Rapids took almost an hour in sub zero air temperatures during which the right hand engine remained running at idle with its propeller brake on. With dew point and frost point temperatures very close to or the same as the air temperature, the conditions were highly conducive to ice or frost formation. These conditions, combined with what was likely to have been residual mixed ice already on the airframe and providing ice crystal nucleation sites, would have been certain to lead to additional ice or frost accumulating on the aircraft critical surfaces.

Once the passengers had boarded the aircraft, the Co-Pilot carried out an external pre-flight inspection which, in the absence of the equipment necessary to facilitate an adequate inspection, was limited to a walk round and a look at the left wing from the top of the passenger door air stairs on what was a dimly lit apron without the use of a flashlight. Although he remained unaware of the full extent of the ice and the continued accretion, on returning to the flight deck, he informed the Captain in command that he had seen more ice on the airframe than he had first expected and added that ice was also visible on the nearby overhead electricity lines. The Captain “responded in a way that indicated he was not concerned” in a short discussion that lasted only a few seconds. The Captain did not attempt to have the aircraft de-iced and was not challenged on that matter by the Co-Pilot.

However, as context, it was found during the Investigation that company departures from remote airports, such as Fond-du-Lac, with some surface contamination on the aircraft critical surfaces “had become common practice, in part due to the inadequacy of de-icing equipment or services at these locations” and the past success of this approach to risk management had resulted in an unsafe practice becoming normalised.

The aircraft taxied for a takeoff from runway 28, which although it involved a slightly longer taxi than for a departure from runway 10, was into wind despite that wind speed being light. The Co-pilot was in agreement with this decision and remarked that “with the amount of ice that was on the aircraft, he would rather have a couple of knots of headwind”. During the Before Takeoff Checks, it was decided that anti-icing set to Level 1 would be sufficient initially and when the aircraft was briefly stopped on the runway threshold, both pilots visually checked their respective-side spoilers which represented the last-chance to check for possible surface contamination before takeoff. Fond-du-Lac is an uncontrolled airport so once the Line Up Checks had been completed, an advisory broadcast was made to report that the flight was rolling for departure from Runway 28. FDR data showed that during takeoff, the combination of upper wing ice accretion which had remained on the aircraft after completion of the approach and the additional ice accreted during the turnround had resulted in decrease in lift performance of 25% and an increase in drag of 58%.

Once airborne, with a positive rate of climb called, the Captain called for gear up but as the Co-Pilot moved the gear selector, the aircraft began an uncommanded roll to the left. FDR data showed that the Captain immediately responded by applying maximum right hand aileron which was followed by the left bank quickly transitioning to a right bank. The Captain responded to this with a partial left aileron input which was followed by the aircraft quickly reverting to left bank. An attempt to correct this second roll to the left was again followed six seconds after liftoff by a full right aileron deflection. These oscillations continued, and their severity began to increase.

Two seconds later, as the aircraft was reaching a peak left bank of almost 33°, its pitch was increasing through almost 21° and the AoA through 18.4°, the stall warning was activated briefly. The Captain responded by moving  the elevator from 9.5° nose up to 14.5° nose down and shortly after this, the aircraft reached its peak height of 142 feet agl above ground at 107 KCAS. The Captain the called for maximum power and as the Co-Pilot complied, the airspeed began to increase. However within seven seconds, the stall warning sounded again accompanied by an EGPWS ‘BANK ANGLE’ Alert as the left bank increased through 40° with full right aileron applied. With the airspeed now 122 KCAS and a descent beginning, the left bank peaked at 63° and the aircraft, now 430 metres  west-northwest of the runway,  began to contact tree tops and the stall warning sounded again briefly. After just 17 seconds airborne, the aircraft collided with the ground in a 32° left bank and with approximately a 4° nose-up pitch. It then slid along uneven ground for a further nine seconds before coming to a final stop. By this time, it had rolled onto its right side, with the right wing touching the ground and the left wing tipped upwards. The crew shut down the engines and then called Company despatch by cellphone and the company emergency response plan was activated.

The annotated ground track is shown in the illustration below. Although the left wingtip was missing, the remainder of the wing did not fracture or bend and both engines were still securely attached to the wings.  However, the fuselage had been broken open by an almost complete transverse fracture just forward of the wing creating a V-shape opening. The main wing structure above the centre fuselage section had collapsed downwards and fuel leaked from it into this section whilst the main landing gear housing had been forced upwards in the same area.

Although the Investigation team did not arrive on site until 22 hours after the accident, police officers who were on site some 8 hours after the accident took photographs of the wing and vertical stabiliser leading edge which showed the presence of ice and although ground icing conditions had persisted following the crash, it was considered that these pictures “provided some indication of the contamination present on the aircraft during the occurrence flight”.

The Investigation concluded that the initial uncommanded roll to the left had been the result of asymmetric lift caused by the unevenness of the ice contamination. It was noted that the Captain had reacted as if the aircraft was an uncontaminated ATR 42 airframe with normal handling qualities and dynamic response characteristics whereas the ice contamination had led to diminished roll damping which created unexpected handling responses. It was determined that although there was sufficient roll control authority to counteract the asymmetric lift, the unexpected handling qualities and dynamic response had led to the roll disturbance developing into an increasing oscillation culminating in complete loss of control in the roll axis, an outcome which “corresponded with the known risks associated with taking off with ice contamination”. 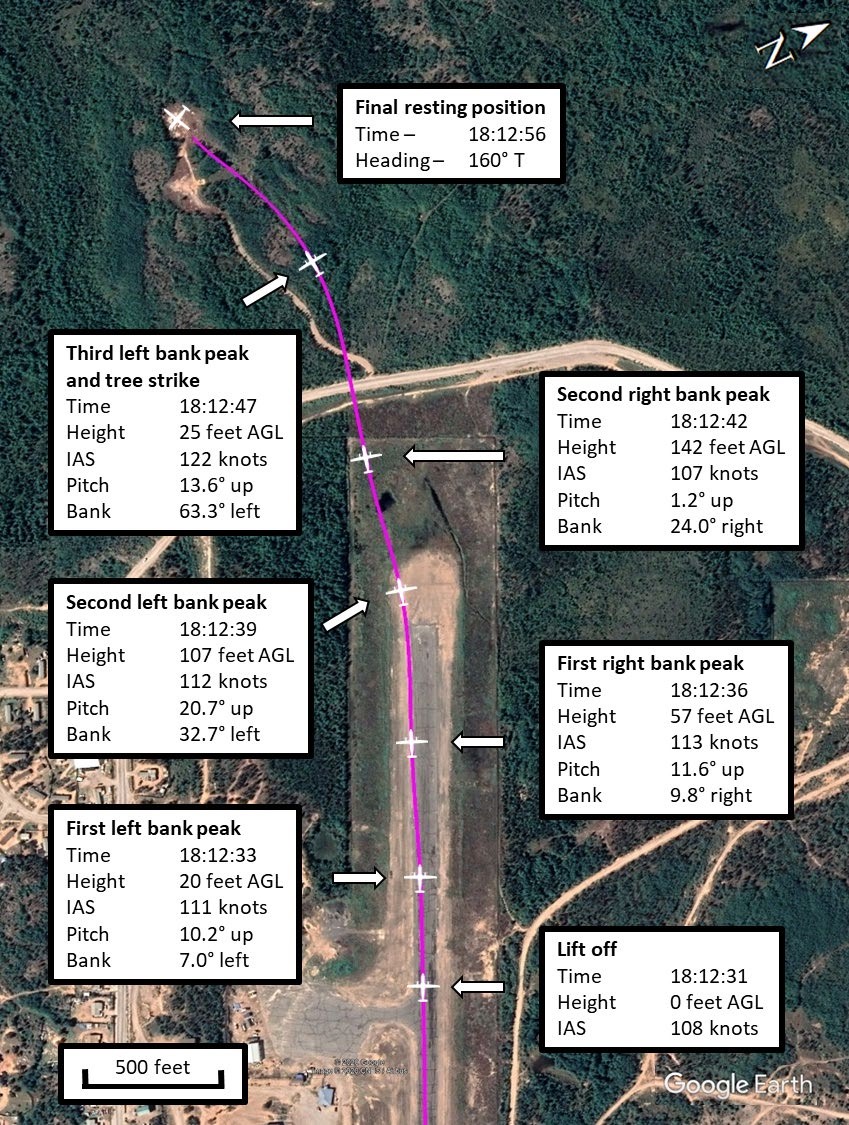 The annotated ground track of the flight from takeoff to the final stopping position. [Reproduced from the Official Report]

The following Findings were formally documented based upon the conclusion of the investigative work:

Other Findings from the Investigation in relation to Transport Canada’s responsibility for the effective oversight of air carrier operational safety were also made as follows:

In addition, the Investigation also resulted in a series of more general observations related to accident risk based on the findings made. These included, in summary, the following:

It is essential that ground icing procedures clearly define how the need for such treatment should be established by flight crews, in particular in respect of what is required to achieve this for particular aircraft types with particular reference to the effective inspection of aircraft surfaces that are not visible from the ground.

Two Safety Recommendations were made in December 2018 as a result of findings from the then still-ongoing Investigation:

Safety Action taken by West Wind Aviation as a result of the accident was noted at its completion as having included, in abbreviated summary, the following:

The Final Report of the Investigation, some 240 pages in length, was authorised for release on 2 June 2021 but not officially released until 28 October 2021. No further Safety Recommendations were made in the Report.