On 18 June 2010, an ATR 42 began a daylight take off on runway 28 at Zurich without ATC clearance at the same time as an A340 began take off from intersecting runway 16 with an ATC clearance. ATC were unaware of this until alerted to the situation by the crew of another aircraft which was waiting to take off from runway 28, after which the ATR 42 was immediately instructed to stop and did so prior to the runway intersection whilst the A340 continued departure on runway 16 .

On 18 June 2010, an Avions de Transport Régional ATR 42-320 being operated by Blue Islands Airline on a scheduled passenger service from Zurich to Jersey, Channel Islands began take off in normal ground visibility and in daylight on runway 28 at Zurich without ATC clearance at the same time as an Airbus A340-600 being operated by Thai Airways on a scheduled passenger service from Zurich to Bangkok began take off from intersecting runway 16 in accordance with ATC clearance. ATC were unaware of this until alerted to the situation by the crew of a British Airways aircraft which was waiting to take off from runway 28, after which the ATR 42 was immediately instructed to stop. It did this in time to clear the runway before the intersection with runway 16 whilst the A340 continued departure on runway 16 in accordance with the issued clearance.

A Serious Incident Investigation was carried out by the Swiss AAIB. The Flight Data Recorder (FDR) and Cockpit Voice Recorder (CVR) recorders were found to have both been overwritten and therefore of no assistance to the Investigation. However, recordings of all ATC media were preserved and provided sufficient information to conduct a full investigation.

It was established that the ATR 42 had received ATC clearance to taxi to the full length take off position on runway 28 from the south side one minute after the A340 had received ATC clearance to taxi to the take off position on runway 16. However, the ATR 42 had also been previously advised that take off clearance should not be anticipated for a further seven minutes after the line up and wait instruction. A British Airways aircraft was stationary at the runway 28 holding point on the north side of the threshold at this time. One minute after the ATR 42 had received line up clearance, the A340 on runway 16 had been given take off clearance and read it back before starting to roll. Unknown to ATC, the ATR 42 flight crew had also wrongly read back the take off clearance as being for them and begun to roll on runway 28. The British Airways crew had heard the A340 readback but had also heard the words “cleared for take off” from a distinctively different voice and when the ATR 42 began take off, had called TWR to alert them to the apparent risk of simultaneous take offs. It was noted that “the reaction of the (TWR) controller to the (this) report…..was immediate and resolved the situation”. It was found that the ATR 42 had been accelerating through 54 knots when told to stop and had reached a speed of 74 knots before beginning to decelerate. It had been able to clear the runway at a point 950 metres along the 2500 metre long runway and approximately 750 metres prior to the intersection of runway 28 with runway 16. The A340 had continued take-off on runway 16 and proceeded as planned to destination. 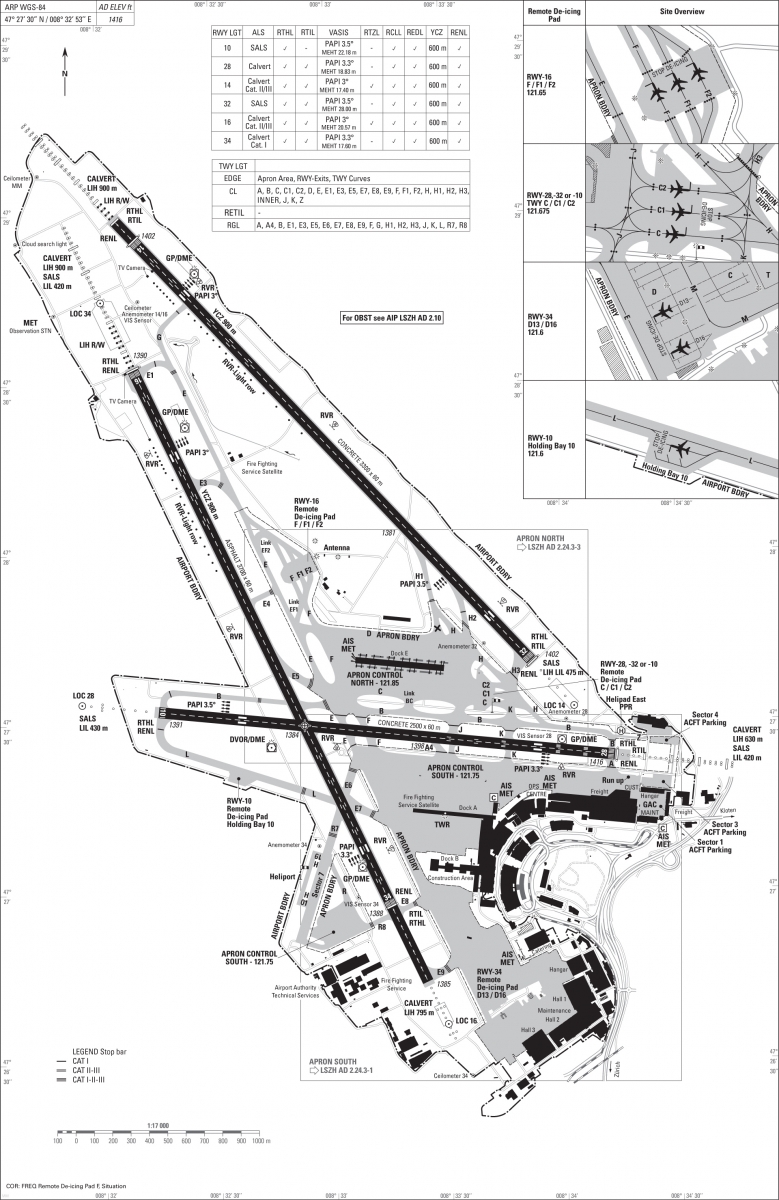 LSZH Aerodrome chart for illustration purposes ONLY. Click to enlarge

In respect of the lack of situational awareness of the ATR 42 crew, it was considered that their failure to appreciate that the take-off clearance was unlikely to be for them was “surprising, since the take-off clearance from the air traffic controller both included the radio callsign and named runway 16”. It was also noted that they had been on the TWR frequency for nearly three minutes prior to their line up clearance and had also been advised at frequency transfer “that they could expect a take-off clearance in seven minutes”. Had they been monitoring other transmissions on the TWR frequency, it was considered that they would have recognised that another aircraft had received a conditional clearance to taxi onto runway 16 and was also awaiting a take-off clearance, especially as the previous clearance to taxi onto runway 16 was subsequently repeated without condition. Finally, since the radio transmission by the ATR 42 accepting take off clearance was shorter than the parallel transmission made by the A340, it was concluded that the end of the read back from the latter would have been “clearly audible to the (ATR 42) crew after releasing (their) microphone button”.

In respect of the crucial role of the British Airways aircraft in mitigating the potentially disastrous consequences of the error made by the ATR42 crew, the Investigation commented:

“The conflict situation caused by the simultaneous take-offs on two intersecting runways was recognised by the crew of (the British Airways aircraft) and reported without delay to aerodrome control, which had not detected the impending danger. This behaviour shows that the flight crew had a very good overview of the situation. This may have been facilitated by careful monitoring of the radio traffic, the realisation that there had been a double transmission and an active intellectual engagement with the problem posed by intersecting runways.”

In respect of the absence to the TWR controller of any sign if simultaneous transmission of take off clearance acceptance, the Investigation noted that:

It was also noted that the automatic selection of ground receiver location for the feed of each aircraft transmission to TWR had significantly favoured the relatively stronger signal from the A340 over the simultaneous one from the ATR 42.

In respect of ground safety nets available to ATC, it was noted that as part of the upgrade of the Advanced Surface Movement Guidance and Control System to Stage II, a RIMCAS system had been introduced on 31 May 2010 which might been expected to have given a useful warning to the TWR of the conflict. However, it was found that a Stage 2 RIMCAS Alert had not been activated until the ATR 42 had already started to reject their take off and was moving at 61 knots and the A340 was accelerating through 71 knots. This was because this activation required that both aircraft must be, on the basis of the calculated projection, in the "critical circle". It was calculated that if the ATR 42 had not rejected its take off, then a Stage 2 RIMCAS alert would only have been triggered when the accelerating ATR 42 was “in the critical speed range for aborting take-off”.

It was noted that at the time of the incident, a building programme was under way in and around the TWR VCR which caused an obstruction to the view towards the threshold of runway 28 and caused abnormal changes in the background noise level. However, whilst a specially installed telephone hotline had been installed to report any interference caused by construction work, this had not been used in the period prior to the investigated event.

The Conclusion of the Investigation was that:

(this) serious incident is attributable to the fact that on runway 28 the crew of an aircraft initiated a take-off without a corresponding clearance; this led to a significant risk of collision with an aircraft taking off on runway 16.

It was found that the following factors contributed to the serious incident:

It was also noted that “the occurrence of the serious incident was favoured by the complex operation on two intersecting runways, which has only a small error tolerance in the event of a high volume of traffic”.

One Safety Recommendation was made as a result of this Investigation:

Safety Action noted by the Investigation to have been taken since the occurrence included:

The Final Report of the Investigation No. 2113 by the Aircraft Accident Investigation Bureau was published on 8 September 2011. The event was categorised by the Swiss AAIB as an ICAO Category ‘A’ AIRPROX (a high risk of collision).