On 7 December 2016, the crew of an ATR 42-500 lost control after airworthiness-related complications followed shutdown of the left engine whilst in the cruise and high speed terrain impact followed. The Investigation concluded that three pre-existing faults with the left engine and its propeller control mechanism had led to a loss of power which had necessitated its shutdown but that these faults had then caused much higher left side drag than would normally result from an engine shutdown and made it progressively more difficult to maintain control. Recovery from a first loss of control was followed by another without recovery.

On 7 December 2016, an ATR42-500 (AP-BHO) being operated by Pakistan International Airlines on a scheduled domestic passenger flight from Chitral to Islamabad crashed en-route in day VMC after the crew were unable to retain control when their attempt to shut down the malfunctioning left engine was complicated by unrelated faults which then prevented the normal operation of the propeller feathering mechanism. The aircraft was destroyed by impact forces and an intense post-impact fire and all 47 persons on board were killed.

An Investigation was carried out by the Pakistan Accident Investigation Board in accordance with ICAO Annex 13 principles. The DFDR and the CVR were recovered from the wreckage and the data from both were successfully downloaded.

The accident flight was the last in a sequence of six for the aircraft and its crew operating out of the former Islamabad International Airport which has since been replaced by a new-build civil airport. After no abnormalities during the first five sectors, as soon as the aircraft became airborne from Chitral, examination of the DFDR data showed degraded accuracy in the speed governing of the left engine propeller but CVR data indicated that this was not apparent to the flight crew. The flight reached its planned cruise altitude of FL135 but was observed from the recorded data to have stabilised at 186 KCAS rather than the expected 230 KCAS which the Investigation attributed to the degraded performance of the left engine.

Approximately 27 minutes after takeoff, a series of malfunctions began to affect the left hand engine and its propeller control system. Initially, fault indications for the Propeller Electronic Control (PEC) were annunciated which the pilots initially responded to it by resetting the system which was unsuccessful and then by de-powering it. The recorded propeller speed decreased slowly from the 82% cruise setting to a recorded 62% and 36 minutes after takeoff, the left engine lost power and was shut down. The recorded propeller speed, which had been reducing, then increased to a recorded 102% before reducing to “Non-Computed Data” (NCD). At this point, simulation results indicated that the blade pitch angle would have increased to a position which may have been close to the feather position before propeller speed began to record again as it increased to between 120% and 125% for 40 to 45 seconds - probably due to malfunction of its control mechanism due to oil contamination - before abruptly dropping below the NCD threshold again. At the same time, simulation results suggested that the blade pitch angle may have stabilised at a value different to that which would occur with a normally feathered propeller.

During this unusual variation of propeller speed, “drastic variations in the aircraft aerodynamic behaviour and sounds” were recorded with the AP initially maintaining directional control. When the left engine power loss occurred, the crew response of increasing power on the right engine was delayed and a 15 second commanded reduction of the power on the right engine power then subsequently occurred whilst the left propeller rpm was in the range of 120% to 125%, both of which contributed to a loss of airspeed. This loss of airspeed continued, aided by another commanded reduction in the no 2 engine power setting and as the AP disengaged, the effect of all this was the aircraft was soon flying close to a stall with the airspeed down to around 120 knots. The aircraft began to roll left and descend and the stick shaker and stick pusher were activated.

The estimated drag on the left side of the aircraft was calculated to have peaked earlier when the recorded left engine propeller speed had been briefly in the 120% to 125% range and during the subsequent transition of this propeller speed to NCD which abruptly reduced the additional component of the drag (possibly caused due to abnormal behaviour of left propeller) suddenly reduced. The advancing of power on the No 2 Engine coupled with right rudder input intended to counter the change in the asymmetric condition coincided with the last abrupt drop in recorded propeller speed and it was deduced that the aircraft stalled, became inverted and lost over 5000 feet of altitude “as a combined effect of resultant aerodynamic forces”, to end up at just over 8000 feet amsl.

The crew successfully recovered from this loss of control and it was deduced by means of a “complex series of simulations and assumptions” that the blade pitch of left engine propeller “may have settled at an angle around low pitch in flight while rotating at an estimated speed of 5%”. The available evidence indicated that as a result of this, additional high drag forces were present on the left side of the aircraft from two minutes after the left engine shutdown for the remaining 4 minutes of flight and it was clear that the behaviour of the aircraft had been markedly different from that typical of single engine operation following the in-flight shut down of an engine. It was considered that this situation would have made it impossible to maintain a level flight whilst not precluding lateral control if a controlled descent were to be initiated. At this stage it was also clear that the aircraft performance had been outside the certification performance envelope and it would therefore have been very likely to have been exceptionally difficult for the pilots to understand and hence maintain control of the aircraft. An annotated illustration of the ground track during the final 15 minutes of the flight is provided below.

The crash site was in a small valley surrounded by terrain with a general elevation of between 3,500 feet and 4000 feet amsl. Because of the speed of impact, most of the wreckage was in pieces and much of it buried in the ground. Signs of a severe post-impact fire were visible on most of the wreckage except a few parts which had been detached on impact. The entire fuselage including the flight deck had completely disintegrated and the parts all burnt beyond recognition. 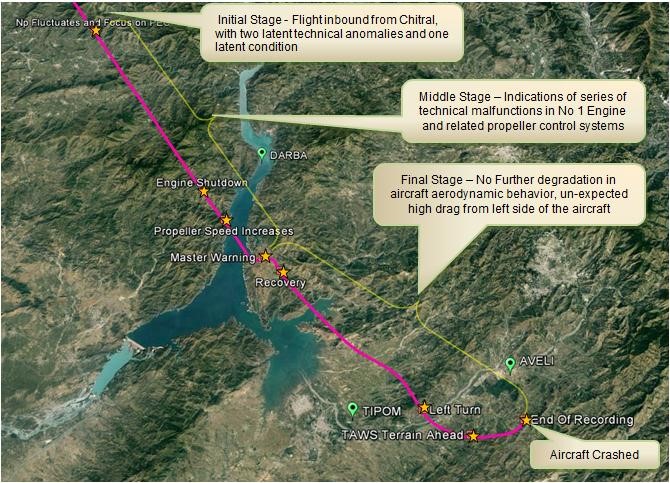 An annotated ground track of the final 15 minutes of the accident flight. [Reproduced from the Official Report]

Although the Investigation considered that the crew response to the engine malfunction and its aftermath had not been objectively optimal, it was accepted that dealing with the situation which had presented itself would have been challenging for any flight crew. It was particularly noted that the “immense psychological impact” on the flight crew of the inverted roll during the first loss of control would have in itself impaired their capacity to perform normally. Although on recovery from this upset, there had been no further technical degradation and the left propeller blade pitch angle and rotation speed had both stabilised, it was likely that the resulting aerodynamic drag on the left side of the aircraft was likely to have been around seven times greater than that which would arise during flight within the normal single engine flight envelope i.e. with the affected side propeller in the feather position.

In the light of the above, the principal focus of the Investigation was therefore on establishing how the loss of airworthiness which had presented the flight crew with circumstances which could not be addressed solely by following documented non-normal procedures had arisen.

A problem with in-service failure of first stage high pressure turbine blades installed in Pratt & Whitney Canada PW127 series engines had been apparent since 2007. Various attempts to resolve this problem were not effective and so on October 2015, the OEM introduced a completely new blade design through SB 21878 and subsequently, six months prior to the investigated accident, amended the Engine Maintenance Manual by specifying replacement criteria for both new and old design blades.

The aircraft operator’s maintenance records were found to show that the left engine had been removed from another of their ATR 42 aircraft for unscheduled maintenance just under a month before the accident because of rubber FOD stuck inside the engine low pressure impeller. The notified pre-conditions to replace the old design first stage high pressure turbine blades specified in the updated Engine Maintenance Manual were therefore met but were not replaced and the engine was then installed in the left hand position of the accident aircraft three weeks prior to the occurrence of the investigated accident. By the time the accident occurred, the left engine first stage high pressure turbine blades were 97 hours above the new recommended hard life and the failure of one of these blades then “triggered a sequence of technical malfunctions in the event flight”.

It was shown that a fractured pitot valve pin in the left propeller overspeed governor had been present since it was last accessed during a maintenance activity but absence of proper records meant that it was not possible to establish when or where this maintenance activity had taken place.

The contamination by debris which was found to be present in the left engine propeller valve module was considered most likely to have been introduced when the propeller system LRUs were not installed on the gearbox during maintenance activity. It was not possible to establish when or where this had occurred because of a lack of records.

Overall, these airworthiness findings led to the conclusion that they were indicative of “gaps in the monitoring and evaluation in the domain of airworthiness and safety oversight” by the Pakistan CAA which was considered to have been “unable to demonstrate proportionate conclusions, identify trends, and undertake proactive interventions” based on its maintenance oversight activity. It was also considered that the same airworthiness findings were also indicative of the absence in Pakistan International Airlines of an effective mechanism for safety and quality management in maintenance capable of ensuring compliance with required procedures and the meeting of expected safety standards. It was also concluded that the Pakistan International Airlines SMS “did not identify or implement appropriate corrective measures”.

The Probable Cause of the accident was, in summary, as follows:

In addition, eight Findings made during the Investigation which did not have any direct contribution to the causes of the accident were considered as being of significant importance and were formally documented as Important Observations as follows:

Two Immediate Safety Recommendations were issued during the course of the Investigation on 9 January 2019 as follows:

A further Immediate Safety Recommendation was issued during the course of the Investigation on 20 August 2019 at the request of Collins Aerospace and the NTSB as follows:

Thirteen new Safety Recommendations were issued at the conclusion of the Investigation as follows:

The 194 page Final Report of the Investigation was completed on 16 November 2020.