On 12 October 2019, an ATR 42-500 on which Captain upgrade line training was being conducted encountered mild clear air turbulence soon after descent began and despite setting flight idle power, a concurrent speed increase led to concern at a possible VMO exceedence. An abrupt and ultimately simultaneous manual increase in pitch attitude followed leading to serious injury to the unsecured cabin crew which rendered them unfit to work. The Investigation found that the upset - a change in pitch from -2.3° to +6.3°in one second - was almost entirely due to pitch input from both pilots rather than turbulence.

On 12 October 2019, an ATR 42-500 (JA01JC) being operated by Japan Air Commuter on a scheduled domestic passenger flight from Kagoshima to Tanegashima in day VMC during which line training was being conducted encountered mild turbulence as it began descent from 11,000 feet with the seat belt signs still off. During a subsequent very brief but severe pitch oscillation, the sole member of cabin crew was thrown off balance and sustained a serious injury which prevented her from continuing her duties and the flight returned to Kagoshima. The upset resulted in a vertical acceleration spike to 3.3g which exceeded the limit load factor.

The event was classified as an Accident and an Investigation was carried out by the Japan Transport Safety Board (JTSB). Relevant data was successfully downloaded from the FDR but since the aircraft had continued in service after the accident flight, corresponding data from the CVR had been overwritten.

It was the crew’s third flight of the day having earlier flown an uneventful two sectors from Kagashima to Kikai. It was noted that on the basis of the available forecasts and an absence of any contrary Preps, the flight crew had no reason to expect any significant turbulence whilst in clear air and that turbulence in cloud during climb and descent could be reasonably expected to be at the same light intensity as it had been on their first two sectors. The flight was uneventful during the climb and cruise but as they began the descent from a cruise altitude of 11,000 feet QNH just over 30 nm from their intended destination still in VMC, minor turbulence began and the PF became concerned that the 240 KIAS speed which he had intended to fly at had begun to increase towards the 250 KIAS VMO.

Having set up the descent with the AP engaged in VS mode at 1300 fpm, he therefore reduced power to flight idle but when this appeared not to be having the expected effect on pitch attitude and therefore airspeed, he used the CWS to temporarily declutch the AP and manually attempted to pitch up. Both pilots observed that this action did not have the desired effect and the Captain - without calling that he was taking control - then pulled back on his own control column as well. The rising airspeed was halted by a very brief but very significant change in pitch attitude from -2.3° to +6.3°in one second which resolved the rising speed problem but led to a momentary spike in vertical acceleration to 3.3g before it returned to the variation associated with minor turbulence with the PF fully in control.

An overspeed warning occurred during the upset but lasted only one second and FDR data showed that the corresponding momentary maximum operating speed (VMO) exceedence had been just one knot. Also, since the simultaneous pitch input on both control columns was in the same direction rather than in opposite directions, no pitch disconnect had occurred. The seat belt signs remained off throughout the upset.

With a normal flight path resumed after an upset of less than ten seconds at 10,800 feet, the Captain checked the passenger cabin video surveillance camera picture and saw that the sole member of cabin crew was being assisted to walk to her crew seat at the rear of the cabin by one of the passengers and she subsequently confirmed that she had lost her balance and been lifted off her feet whilst walking towards the rear of the cabin during the upset and then had fallen and was now unable to stand unaided. The Training Captain in command advised ATC that the flight had just encountered “severe turbulence” and requested a return to Kagoshima rather than continuing to Tanegashima and this was approved and completed without further event with a landing 25 minutes after the upset. On arrival, an ambulance was waiting to transfer the injured cabin crew to hospital where it was found that she had a broken right ankle and a damaged ligament both affecting the same joint.

Although there was a slow moving typhoon some 150nm to the east of the accident site, the meteorological synoptic chart showed that the usual steep pressure gradient around this typhoon centre had been confined to an area far from it and that neither the pressure gradient along the route flown nor any other atmospheric factor was likely to have caused a sudden upset of the severity experienced and none was forecast.

Further analysis of the FDR data by ATR was then able to distinguish the contribution made to the rapid pitch oscillation that led to the cabin crew injury by the pilots’ pitch up command and atmospheric variation at that time. Whilst a simulation based on the available data was not precise, it was reliably estimated that almost all of the maximum vertical acceleration of +3.3g (around 80%) resulted from the simultaneous aggressive rearward movement of both pilots’ control columns (marked (d) on the illustration below) as they prioritised their concern about preventing an exceedence of VMO.

The Investigation noted the fact that even a Training Captain had failed to follow mandatory procedures covering the takeover of control and the avoidance of control column pitch disconnect and that despite a history of (relatively minor) VMO exceedences, the operator “had not provided pilots with recommended operational procedures in the case of approaching or exceeding VMO”. 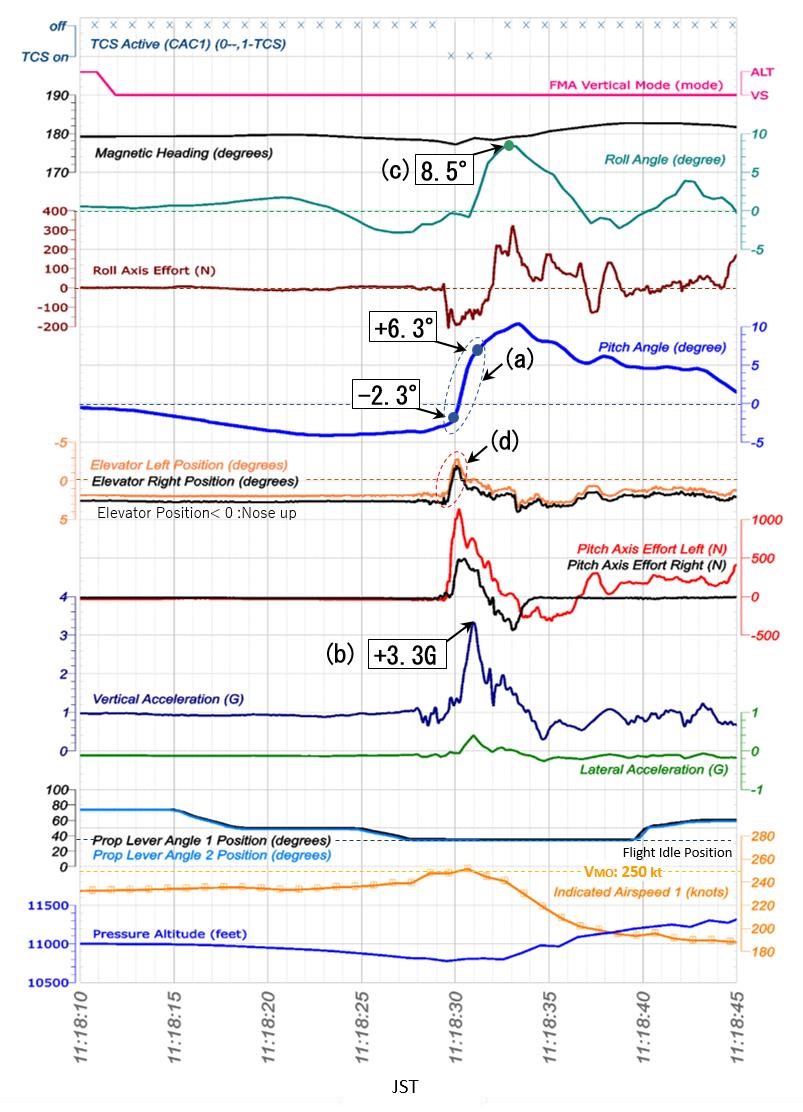 Relevant FDR data around the time of the upset. [Reproduced from the Official Report]

The Probable Cause of the accident was recorded as the aircraft being suddenly shaken which caused the cabin attendant who was walking along the aisle to fall off balance and sustain an injury (with the) upset of the aircraft being due to a sudden change in aircraft attitude because of nose-up pitch input by the flight crew to avoid exceeding the VMO together with the nose-up effects resulting from an increase in the aircraft speed following an encounter with localised changes in the wind velocity.

Safety Action taken as a result of this event by Japan Air Commuter was noted to have involved the issue of supplementary “Operating Information” to support “existing procedures” in the event that VMO is approached or exceeded. These included emphasis on the need for a timely selection of a target airspeed which provides a safety margin appropriate to the prevailing flight conditions and the importance of any unavoidable manual intervention in pitch control not exceeding the rate of 2-3° per second as recommended for takeoff rotation. In view of the dual control column input, a reminder that this is “strictly forbidden” and that any transfer of control between pilots must follow SOP was also issued.

The Final Report was adopted by the JTSB on 2 July 2021 and published in both English translation and the definitive Japanese version on 29 July 2021. No Safety Recommendations were made.