On 27 April 2020, an ATR 72-200 freighter crew attempted a night takeoff in good visibility aligned with the edge of runway 06 and did not begin rejecting it until within 20 knots of the applicable V1 despite hearing persistent regular noises which they did not recognise as edge light impacts and so completed the rejection on the same alignment. The Investigation noted both pilots’ familiarity with the airport and their regular work together and attributed their error to their low attention level and a minor distraction during the turnround after backtracking.

On 27 April 2020, an ATR 72-200 (EC-INV) being operated by Swiftair on a scheduled cargo flight from Cologne-Bonn to Sofia as WT6992 backtracked runway 06 to prepare for takeoff at night in good visibility but on turning round it was lined up with the left hand edge lights and subsequently attempted to takeoff on that alignment causing significant edge lighting damage before making a high speed rejected takeoff still aligned with the edge. The aircraft was also damaged.

An Investigation was carried out by the German Federal Bureau of Accident Investigation (BFU). The FDR and 2 hour CVR were both removed from the aircraft and their relevant data was successfully downloaded. A transcript of ATC communications was also provided.

The flight was being conducted as the first sector of a crew duty commencing in the early hours. Having taxied to the holding position for runway 06, the TWR controller cleared the flight to backtrack and line up runway 06. As the Captain taxied the aircraft on the centreline, the Before Takeoff Checklist was completed and on reaching the turn pad at the end of the runway, the aircraft began following the lit guidance line provided for the turning manoeuvre. The CVR recording confirmed that about half way round the turn, an unusual sound had occurred which the crew initially assumed was the flight deck door opening but then realised it had been the Captain’s bag falling down behind his seat. He then completed the turn but aligned the aircraft with the runway edge lights.

Despite having to await takeoff clearance whilst other aircraft were taking off from the crossing runway 32R, both pilots stated that they had been sure that the aircraft was correctly aligned with the runway centreline and when cleared began the takeoff roll. After beginning to accelerate, the crew reported that they had heard “several blows” to the aircraft and “saw objects flying off, but could not identify them”. Shortly after passing 80 knots (the calculated V1 was 109 knots) the Captain rejected the takeoff without announcing this, which was considered a significant omission. Once the aircraft speed had reduced enough for it to be possible enough to do a 180° turn and exit the runway, which was about 800 metres from its start, this was done and the runway was exited via the same taxiway which the flight had earlier used to enter the runway for backtrack. After a “short discussion”, the crew taxied the aircraft back to the apron, reportedly still unable to explain the “blows and sounds” which they had heard. 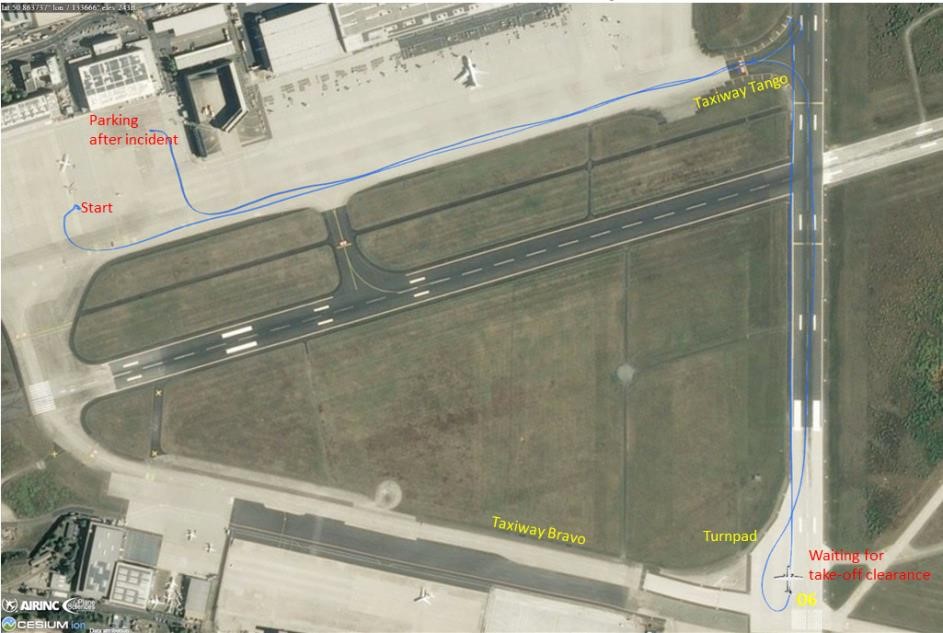 The track followed by the aircraft from the beginning of its taxi out until arriving back on the apron. [Reproduced from the Official Report]

The subsequent runway inspection found that a total of 9 edge lights had been “torn off or destroyed” and one taxiway light was also damaged. The remains of the lights and their mounts were found scattered across the runway. Consequential damage to the aircraft was found to have been caused to the area of the nose landing gear, below the fuselage close to the main landing gear and to a number of individual propeller blades on both propellers.

It was noted that the TWR controller’s workstation was oriented towards the main runway 14L/32R because this runway was the one used by 90% of the airport’s traffic. This meant that whilst it was possible to visually confirm that an aircraft was at the beginning of runway 06, to do so it was necessary to turn around and stand up. However, the distance involved and the lack of reference points mitigated against being able to judge exactly where an aircraft was in relation to the runway centreline when lined up. It was also noted that although ground radar was available, the display showed all runways and taxiways and the depiction of an aircraft on the runway was not true to scale and was often almost as wide as the runway.

Intermittent tyre tracks on the turn pad showed the pre takeoff alignment with the edge lights ahead (see the illustration below). The edge light alignment was found to correspond approximately to midway between the right hand runway edge and the left hand edge of the turn pad. It was noted that “due to the taxiway markings from runway to the turn pad, the white line of the runway edge marking on the turn pad was not a continuous line and therefore showed similarities with centreline markings”. This was considered to be of potential significance given that the misaligned line up occurred along this interrupted runway edge marking as well as being approximately equidistant from the edge of the paved surface when on the turn pad. 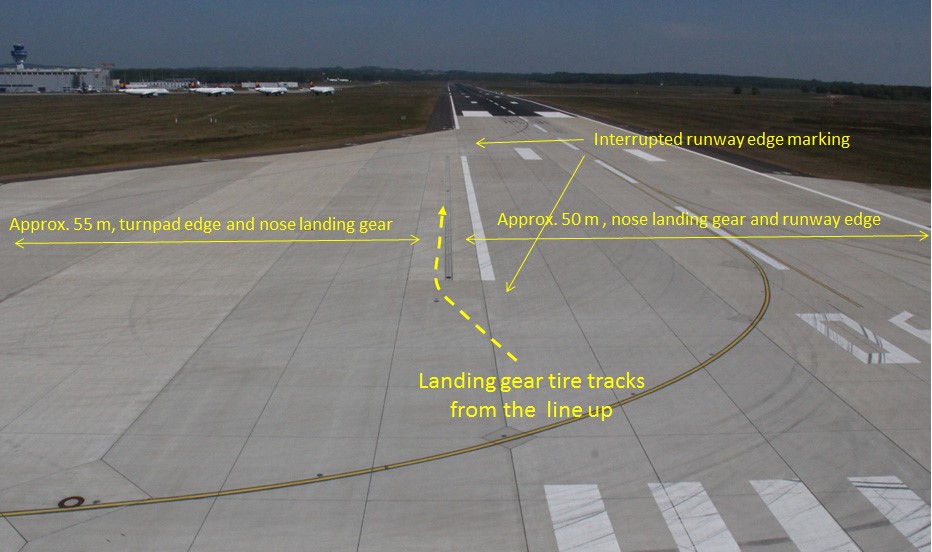 Landing gear marks left during the turnround and line up. [Reproduced from the Official Report]

It was noted that edge light takeoffs at night are not unknown, the BFU having investigated one such event, also involving an ATR72-200, at Dresden in 2002. Others, including another ATR72-200 event at Karup, Denmark in 2016 and one involving an Embraer 120 at Amsterdam in 2016 were also noted.

It was further noted that on completion of another investigation into an attempted edge light takeoff at Biggin Hill in 2014 the UK AAIB made a Safety Recommendation to ICAO to “initiate the process to develop within Annex 14 Volume 1, ‘Aerodrome Design and Operations’, a standard for runway edge lights that would allow pilots to identify them specifically, without reference to other lights or other airfield features”.

The Investigation considered that the Captain’s bag falling to the floor as he was making the necessary 180° turn after backtracking had undoubtedly been allowed by him to create a significant but unnecessary distraction at a point where he should have remain focused on his task of positioning the aircraft. There was no time pressure as it would already have been clear that an immediate takeoff clearance was unlikely. Once the error had been made, the failure to identify it suggested a degree of relaxed complacency in respect of an imminent takeoff which had no particular challenges in respect of the prevailing weather conditions (benign) or runway surface condition (dry). More generally, it was considered that as the possibility of an error such as this cannot be eliminated, the only risk management option is “error-tolerant design”. In this case, that would mean making it less easy to confuse edge and centreline lighting in the absence of other references.

The Cause of the Runway Excursion was formally documented as “the crew confusing the left runway edge marking and lighting of runway 06 at Cologne/Bonn Airport with the centre line and therefore aligning the aircraft unnoticed with the wrong runway lighting for takeoff”.

The Final Report of the Investigation was completed on 7 December 2020 and released on 22 January 2021.