On 19 August 2012, the crew of a Flybe Finland ATR 72-200 approaching Helsinki failed to respond appropriately to a fault which limited rudder travel and were then unable to maintain directional control after touchdown with a veer off the runway then following. It was concluded that as well as prioritising a continued approach over properly dealing with the annunciated caution, crew technical knowledge in respect of the fault encountered had been poor and related training inadequate. Deficiencies found in relevant aircraft manufacturer operating documentation were considered to have been a significant factor and Safety Recommendations were made accordingly.

On 19 August 2012, an ATR 72-200 (OH-ATH) being operated by Flybe Finland on a scheduled domestic passenger flight from Tampere to Helsinki under callsign FCM992T departed the right hand side of the 60 metre-wide runway 22L after a daylight touchdown in benign weather conditions. Damage to the aircraft was only minor and it subsequently regained the runway without impacting any ground installations with none of the 31 occupants sustaining any injuries. 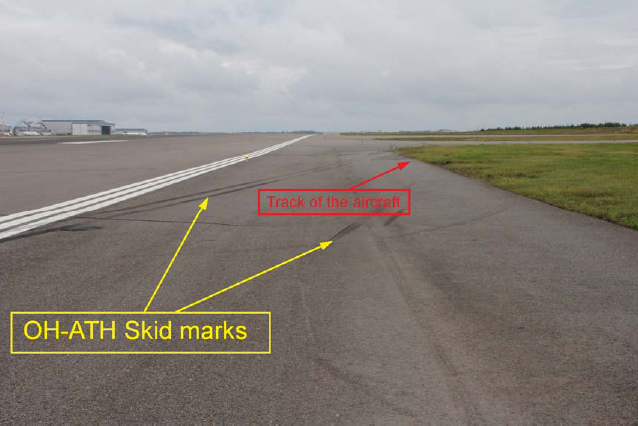 The event was investigated by the Safety Investigation Authority Finland (SIAF). Information to support the Investigation was obtained from the aircraft Flight Data Recorder (FDR) and Cockpit Voice Recorder (CVR), from ATC radar, radio and telephone recordings and interviews.

It was determined that a malfunction of the rudder Travel Limitation Unit (TLU) had prevented it changing from the restricted high speed mode to the unrestricted low speed mode as airspeed decreased below 180 knots. The failure was found to have been caused by an inoperative electrically-powered actuator. This failure had been evident to the crew when the aircraft reached approximately 6nm from the landing runway threshold. FDR and CVR data showed that an aural and visual Master Caution (the latter displayed separately to each pilot) had been accompanied by ‘FLT CNTL’ annunciation on the CAP and a corresponding amber fault annuciation on the overhead system panel as the aircraft passed 1760 feet aal. In addition to these indications, the green ‘RUD TLU LO SPD’ located next to the landing gear status lights did not illuminate as usual. These indications left no room for doubt that the rudder limiter remained in restricted mode.

However, despite the fact that continuing the approach would result in a landing less than three minutes later and the crew were not familiar with the required response to the situation, the aircraft commander, acting as PF decided to continue the approach whilst the First Officer searched in the Quick Reference Handbook (QRH) for the relevant drill and he completed the normal pre-landing checks on his own, keeping the AP engaged until the prescribed minimum height for an instrument approach.

As the aircraft approached 700 feet aal, the First Officer eventually found the correct page in the QRH (see below) and at 250 ft “the flight crew noted that the normal landing criteria required by the QRH (for the absence of the green TLU low speed annunciation) were being met and continued the approach all the way to the runway”. 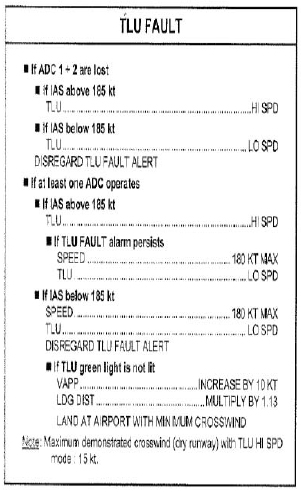 It was noted that although this was correct, the crew had failed to notice that the first relevant checklist action was to manually select the low speed TLU mode. It was also concluded that they were evidently unaware of the reasons for the restrictions which were imposed (and met) by the absence of the green TLU LO SPD annunciation - the fact that, instead of the full range of ± 28.5 degrees rudder travel, this travel would be mechanically limited to ±4 degrees.

When the Captain reduced engine power to below flight idle immediately upon the first contact with the runway, the aircraft rapidly swung 14.5° to the right because of an abnormal degree asymmetry in the way the Power Levers were moved below Flight Idle. Whilst the effect of this would normally have been correctable by rudder input, the effect of the mechanical restriction meant that this was not possible and the aircraft departed the right hand side of the runway onto the adjacent grass some 550 metres from the first ground contact.

As aircraft ground speed decreased, the Captain used the Nose Wheel Steering to return the aircraft to the paved surface, reduced Power to Ground Idle and “continued to taxi normally in accordance with ATC instructions”. In respect of the fact that there was no positive move to select Ground Idle (GI) once the aircraft had landed with Flight Idle (FI) selected (see the FDR trace below), the aircraft manufacturer was noted to have commented that “it is preferable to go from FI to GI at reasonable speed (within 2 or 3s) and not to stay too long in (an) intermediate position”. 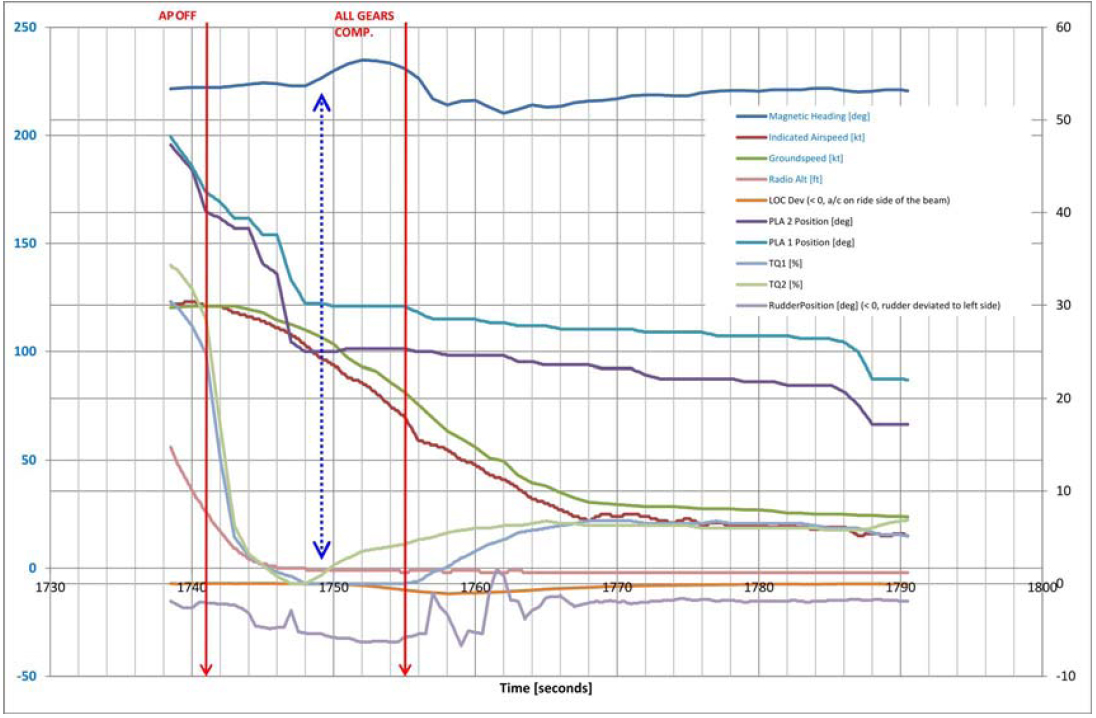 During the taxi in, the Captain noticed the TLU system panel fault annunciation for the first time and observed that the adjacent TLU manual selection switch had remained in the ‘AUTO’ position. He then “set the switch to the low speed (LO SPD) mode” but “after approximately 10 seconds the Captain noted that the system was inoperable and switched it back to AUTO” being unaware of the fact that the transition actually takes 33±5 seconds.

The Investigation also disclosed that:

It was noted that whilst the aircraft commander was experienced, the First Officer had very little pilot experience, although the majority (448 hours) had been obtained on the incident aircraft type. The potential effect of the prevalent authority gradient on crew responses was noted but not explored further.

A number of observations were made by the Investigation in respect of flight crew actions including that:

On the subject of pilot training at Flybe Finland, the Investigation considered that:

“Judging from discussions and interviews it appears that the flight crews’ system awareness is not at an acceptable level with regard to the TLU system. It is the opinion of the investigation group that Flybe’s flight crews did not possess sufficient knowledge or awareness of the TLU fault’s consequences upon the controllability of the aircraft. Moreover, flight crews have suffered from an evident lack of TLU system awareness as well as its special characteristics when the standby system is switched on.”

In respect of Probable Cause and Consequence, the Investigation found that:

Contributory Factors were identified as:

Safety Action taken by Flybe Finland during the Investigation to improve their pilot training provision in respect of the TLU system was noted.

Four Safety Recommendations were issued as a result of the Investigation as follows:

(1) that the Manufacturer of the ATR aircraft should include instructions for the manual selection of the TLU’s standby system in the FCOM and in other relevant instructions.

(2) that the Manufacturer of the ATR aircraft should include in the FCOM the length of time it takes for the TLU’s standby system to change from the HI SPD mode to the LO SPD mode.

(3) that the Manufacturer of the ATR aircraft should include in the FCOM and other relevant instructions a TLU FAULT warning [CAUTION] of limited rudder travel and of the considerably reduced directional controllability during the approach and landing when the TLU system is in the HI SPD mode.

(4) that the Manufacturer of the ATR aircraft should include in the FCOM further information on the TLU system including the limitations on the controllability of the aircraft caused by its malfunctioning.

The Final Report of the Investigation was completed on 13 October 2013, published on 1 November 2013 and subsequently made available in English translation.