On 17 July 2011, an Aer Arann ATR 72-200 made a bounced daylight landing at Shannon in gusty crosswind conditions aggravated by the known effects of a nearby large building. The nose landing gear struck the runway at 2.3g and collapsed with subsequent loss of directional control and departure from the runway. The aircraft was rendered a hull loss but there was no injury to the 25 occupants. The accident was attributed to an excessive approach speed and inadequate control of aircraft pitch during landing. Crew inexperience and incorrect power handling technique whilst landing were also found to have contributed.

On 17 July 2011, the crew of an ATR 72-200 being operated by Aer Arann on a scheduled passenger flight from Manchester to Shannon mishandled a daylight landing on 3199 metre long runway 24 at destination in normal visibility but gusty crosswind conditions and the nose landing gear collapsed. A MAYDAY was declared as directional control was lost and the aircraft gradually veered left, exiting the runway paved surface onto the grass before coming to a stop at the left edge of Taxiway Alpha. The 25 occupants were uninjured and an emergency evacuation was not necessary but the damage was such that the aircraft was declared to be beyond economic repair.

An Investigation was carried out by the Irish AAIU. DFDR and Cockpit Voice Recorder (CVR) data was successfully downloaded and ATC and useful airport CCTV recordings were also available. It was found that the final stopping position was on the left hand edge of Taxiway Alpha parallel with its centreline and some 1200 metres from the initial impact marks on the runway. During its ground track to this position, the aircraft left hand propeller was found to have struck a runway sign, demolishing it and damaging one propeller blade and a runway edge light was also destroyed.

It was found that the Captain, PF for the accident landing, had recently been promoted to command after acquiring the majority of her flying experience as a First Officer on the accident type with the operator. Having achieved just over 200 hours in command, she was clear of restrictions placed on new commanders. The First Officer had over a year’s experience on type with the operator.

It was established that immediately prior to the accident landing, another landing had been attempted on the same runway and rejected in favour of a go around following contact of the nose landing gear before the main landing gear – although on this occasion at only 1.3g. During that go around, the CVR recording included the Captain stating that it was her first go around since promotion and only her third ever during line operations. The First Officer commented that it was her first go around in the past year. The Investigation also noted that “following the go-around the CVR recording indicated that the PF had higher levels of stress”.

DFDR data indicated that both approaches had been flown at a considerably greater airspeed than recommended. The ATR72 FCOM was noted to recommend Vapp (calculated as 99 knots in this case) plus a ‘wind factor’ defined as “the highest of 1/3 of the headwind velocity” and the gust factor (the difference between the mean wind speed and the maximum gust) until a flare at 20 feet agl when power should be reduced to flight idle for touchdown at a slightly lower airspeed. Information provided by the aircraft operator was at variance with this and led to a Vapp of 114 knots compared to the FCOM method which would have produced 107 knots. However, DFDR data (see diagram below) showed that “the typical IAS flown during both approaches was 20 to 25 knots above that”. It was also noted that “although both flares correctly commenced at 20 ft RADALT, the IAS recorded on both occasions were excessive at touchdown, momentarily reaching 139 and 140 knots respectively (which) was partly due to the PF increasing torque after flaring.” 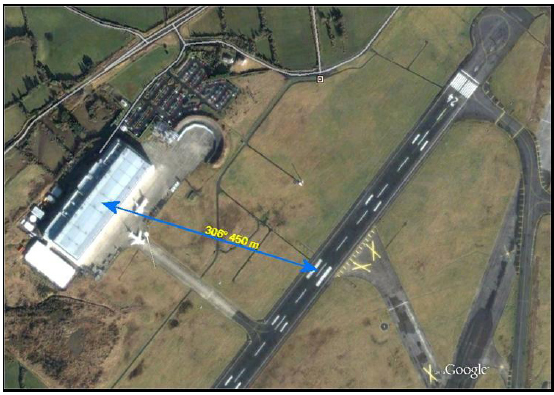 Indicated Airspeeds during both approaches (reproduced from the Official Report)

The first attempt at landing had involved two main gear bounces in quick succession followed by a pitch down input which caused the aircraft to bounce on the nose landing gear before transitioning into the subsequent go around without further event. The second landing attempt, although intentionally planned at the TDZ rather than intentionally displaced upwind, consisted of one main gear bounce followed by a similar pitch down input which forced the nose landing gear onto the runway and precipitated the collapse of the leg. Collateral damage caused failure of one of the two hydraulic systems and led to the normal engine feathering and shutdown methods being rendered ineffective, which delayed that action.

The Investigation established that the prevailing cross wind conditions did not exceed the limits established by the operator which were slightly more restrictive than those given by the aircraft manufacturer. However, the potential effect of additional turbulence generated by a large six-bay hanger situated 450 metres from the runway 24 TDZ with the prevailing wind direction (see below) was considered. It was noted that the required ATC caution about this turbulence had been given and that, like all Aer Arann flight crew, the accident aircraft pilots were aware of it. A technical assessment undertaken in 1996 following reports of turbulence resulting from the construction of this hangar was found to have concluded that there were only “slight wind velocity deficits and turbulence intensity changes along the runway close to the hangar when the approach wind is blowing almost normal to the rear face of the hangar." However, the author of the Report, when contacted by the Investigation “stated that a neutral air mass had been considered and that no allowance was made for atmospheric instability” which would typically - and had at the time of these approaches - prevailed. A study of the effect of building-generated turbulence on aircraft making an approach published by the Dutch NLR in 2010 was also consulted. However, after considering these sources against the available evidence from the investigated event, it was stated that “the Investigation notes from the DFDR readouts that the gains and losses of IAS, though significant, were of short term duration, typically over one or two seconds, and is satisfied that the longer term average airspeed changes were due to engine power changes and not wind shear”.

At the time of the accident, although the secondary runway 13/31 was still in use, the airport operator advised the Investigation that that "a maximum weight restriction of 25 tonnes for landing or take-off movements had been imposed and the runway was last used in 2001 for landing and take-off”. It was declassified as a runway on the 26 July 2012 “due to its surface condition not being in conformity with ICAO recommendations regarding longitudinal slope changes and smoothness of surface.”

In respect of the performance of the flight crew, the Investigation concluded that “the severity of the prevailing conditions was not recognised by either of the Flight Crew, either before or after the go-around” and that the objective of landing at Shannon “was not evaluated against the prevailing weather conditions and their relative experience levels”. However, it was also concluded that guidance available to the Operator’s crew on crosswind landing techniques was deficient.

In respect of managing operational safety issues before they led to accidents and incidents, the Investigation noted that although an Flight Data Monitoring programme was not a regulatory requirement, an assessment of the handling differences between the three variants of ATR-72 in the fleet, which was considered as a potential factor in landing technique during the investigation, would have been more effective with access to such data rather than relying on pilot comments on the subject.

The Investigation concluded that the Probable Cause of the accident was “excessive approach speed and inadequate control of aircraft pitch during a crosswind landing in very blustery conditions” and that Contributory Factors were:

(1) Confusing wording in the FCOM that led the crew to compute an excessive wind factor in the determination of Vapp.

(3) Inexperience of the pilot in command.

Five Safety Recommendations were made as a result of the Investigation. On 23 Aug 2011 it was recommended:

The remaining four Safety Recommendations were issued following the completion of the Investigation:

In respect of the 2011 Recommendation, the Investigation was subsequently advised that Aer Arann had addressed its content through the issue of Flight Crew Instruction FCI No. ATR 11/13 which designated Shannon as a Category ‘B’ airport with special requirements including a reduction in the normally applicable Cat 1 crosswind limits and to wet/contaminated runway limits.

It was noted that because the Aircraft Operator was considered to have satisfactorily addressed the consequences of approach and landing with an IAS well in excess of the computed Vapp, no Safety Recommendation on that subject was necessary.