On 16 March 2016, an engine fire occurred to an ATR 72-200 departing Budapest and after declaring a MAYDAY, it was landed in the reciprocal direction on the departure runway without further event. The Investigation found that the failure had been initiated by the fatigue-induced failure of a single blade in the power turbine assembly but with insufficient evidence to ascribe a cause for this. A number of almost identical instances of engine failure initiated by failure of a single turbine blade were noted. Opportunities for both ATC procedures and flight crew response to mandatory emergency procedures were also identified.

On 16 March 2016, an engine fire occurred to an ATR 72-200 departing Budapest and after declaring a MAYDAY, it was landed in the reciprocal direction on the departure runway without further event. The Investigation found that the failure had been initiated by the fatigue-induced failure of a single blade in the power turbine assembly but with insufficient evidence to ascribe a cause for this. A number of almost identical instances of engine failure initiated by failure of a single turbine blade were noted. Opportunities for both ATC procedures and flight crew response to mandatory emergency procedures were also identified.

An Investigation was carried out by the Hungarian Transportation Safety Bureau. Relevant data was recovered from both the CVR and FDR.

It was established that at about 650 feet agl after takeoff from runway 13L at Budapest and just as the landing gear was selected up, a fluctuation in the right engine torque indication occurred and an engine fire warning for that engine had activated. A ‘MAYDAY’ was declared to TWR and an engine problem advised as the circumstances. However, FDR data showed that upon the activation of the fire warning, the power lever of the failed engine was set to idle but that the rest of the (memory) items on the applicable QRH drill, which included feathering the propeller and stopping the fuel supply to the engine, did not take place for a further minute.

Although no fire or smoke was reported by the crew, the TWR controller visually observed smoke coming from the affected engine and implemented an “anticipated air traffic occurrence” alarm. The crew indicated that they intended to return to land on runway 31R and initially requested a right turn to position for a final approach which was then changed to a request for a left turn. The aircraft continued to climb and passing 2,700 feet QNH as the left turn was commenced, the crew requested to level off at 3,000 feet which was approved. The initial left turn was then continued through the runway extended centreline and finally onto final approach. The remainder of the return was without further event and the aircraft landed on runway 31R after approximately 9 minutes airborne with the emergency services standing by. The track flown by the aircraft is shown on the first illustration below.

Having confirmed that the aircraft was able to taxi in without assistance, it was transferred to GND and cleared to a stand where the remaining engine was shut down and the passengers disembarked normally. It was then possible to see that the number 2 engine power turbine and tail pipe were “badly damaged” with the fire also having caused “significant damage to the engine nacelle”. However, it could be seen that the engine failure had been fully contained within the engine nacelle. 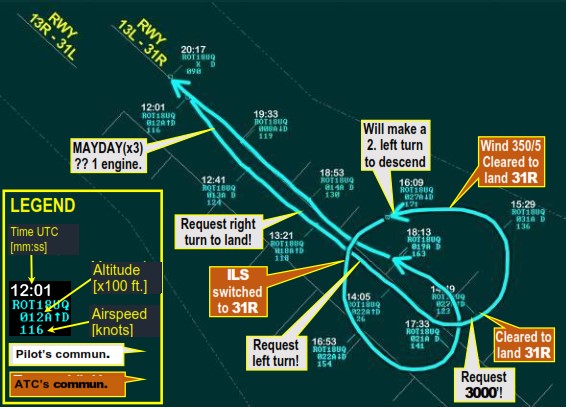 The flight path of the aircraft for the full flight from and returning to runway 31R. [Reproduced from the Official Report]

The failed engine was removed and disassembled and it appeared that the sequence of events which led to the failure may have been started by the fracture of a single blade in the first stage pressure turbine. This led to the rotor assembly becoming unbalanced and the consequential vibration was then likely to have broken the three oil pipes held in the № 6 & 7 bearing housing, which disintegrated due to the high temperature which developed and the oil spilt from them then caught fire. As a consequence of this, both the low pressure and power turbine rotor assemblies were displaced and damaged and their shafts fractured. Damage to the compressors was consequential to the severe damage to the turbine section of the engine. 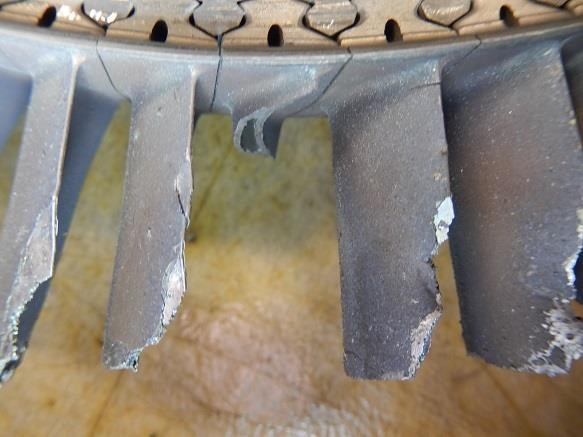 The stump of the fractured blade which started the process leading to engine failure. [Reproduced from the Official Report]

The remaining part of the fractured blade which it was confirmed on further assessment had been the cause of the rest of the failure was subjected to detailed examination at the engine manufacturer’s facility. The origin of the fatigue crack was found to have been the trailing edge of the blade and from there, it had then spread towards the leading edge as far as half of the chord length after which the remainder had fractured because of overloading. It was found that the alloy from which the blade had been made met the corresponding specification and there was no sign of any anomaly at the trailing edge of the blade. There was also no evidence of any fatigue cracking in any of the other blades on the same rotor.

It was found that the set of blades fitted to the rotor had been a mixture of new and used ones and that the one which fractured had been a new one installed between two old ones. However, the view taken by the engine manufacturer was that although such an explanation would be plausible, “it cannot be stated that the fatigue crack which led to fracture of the blade would have been due to the vibration generated by loose fastening”.

The Investigation noted that there had been a number of previous engine fire events in ATR 42 and 72 aircraft which the subsequent investigations had attributed to the failure of a turbine blade. These had included to a TAROM-operated ATR 42 departing Budapest in 2011 where the fatigue failure of the blade involved had been attributed to a latent material defect causing microshrinkage porosity and another 2011 event and one in 2013 which had been investigated by other European SIAs.

The operational response to the emergency

It was noted that the HungaroControl MATS reference to the appropriate general response to any instance of on-board fire or smoke did not include any reference to the movement of aircraft on the ground. However, it was also noted that Part 1 of ICAO Doc 9137 when discussing rescue and fire fighting activities says, when dealing with reported aircraft fire warning indications that “it is advisable to bring the aircraft to a stop and allow the rescue and fire fighting personnel to inspect the area involved, prior to parking at the apron where fire would endanger other aircraft or buildings” and that an aircraft should continue taxiing to the apron only after such an inspection has been conducted and its findings support such continued taxiing in.

The failure of the crew to complete the engine fire checklist memory items in full and without delay resulted in the failed engine continuing to rotate at high temperatures - the recorded ITT reached a maximum of 851ºC - which had the potential to considerably increase the extent of engine damage. It was also noted that the non-feathered failed engine propeller would have created drag capable of compromising the handling qualities of the aircraft.

Once the engine fire warning had occurred, the engine involved had been shut down and the aircraft was fully under control, the next action is “LAND ASAP”. However, for over three minutes after the warning, it was noted that the aircraft had “continued to climb for over 3 minutes” during which time it reached a maximum altitude of 2,565 feet. The effect of this was that when it turned back in the direction of the airport, it was too high to make an approach without first manoeuvring to lose height. This meant that the elapsed time between the appearance of the fire warning and touchdown was almost 8½ minutes which was noted as having been more than twice the time spent in the air by the ATR42-500 which had been involved in an almost identical event (referenced above) on departure from Budapest in 2011.

The Cause of the Serious Incident was formally documented as “the fracture of a blade in the 1st stage power turbine of the number 2 engine as a consequence of a fatigue crack”.

Three Factors which increased Risk were also identified as:

The Final Report was completed on 9 October 2018.