On 21 August 2010 a Golden Air Flyg ATR 72 under ATC control in Class C airspace was vectored close to three parachutists who had been dropped from a helicopter as part of an air show because of confusion between the ATC unit with responsibility for the incident airspace and the adjacent unit to which that responsibility had been delegated because it was nearest to the air show site. Additional confusion was caused by poor R/T practice by both ATC units and by different portrayal of a holding pattern on charts held by ATC and he flight crew.

On 21 August 2010, an ATR72-200 being operated by Golden Air Flyg on a scheduled domestic passenger flight from Visby to Stockholm Bromma in day Visual Meteorological Conditions (VMC) was radar vectored close to some parachutists approximately 4nm east-south-east of the airport which had just been dropped from a Visual Flight Rules (VFR) helicopter as part of an air show. The proximity was reported by a concerned ground observer.

An Investigation was carried out by the Swedish AIB. It was confirmed that Notice To Airmen and navigation warnings had been issued for the air show area and that the display programme had been advised to the two air traffic control units involved in the incident. It was noted that air show management was co-ordinating the event programme using an aircraft band radio on a discrete frequency. However, they had no means of direct contact with any air traffic control unit.

In respect of the VFR operation of the VFR helicopter, it was noted the weather conditions in the area had been broken cloud with bases estimated at 1000-1500 feet and 3000-6000 feet and a 2000-5000 feet wind velocity of 230-260°/20-25 knots. Available evidence indicated that the parachutists who passed near the ATR 72 had done so comfortably clear of cloud.

It was established that the helicopter from which seven parachutists were to be dropped had taken off from the intended drop zone at Gärdet, the site of the Stockholm Air Show approximately 4nm east south east of Bromma with initial clearance from Bromma TWR to climb to 2000 feet. This was the limit of both the Bromma CTR and the temporarily-established air show restricted zone. The controlling ATC unit for the airspace above 2000 feet, Arlanda ACC South Sector agreed that Bromma TWR should keep control of the helicopter as it continued to climb to FL070 in VMC for the drop. The helicopter was advised of the clearance and instructed to “report back when you intend to drop the parachutists”.

Arlanda had then contacted Bromma TWR to get an update on the drop plan. Bromma TWR were unable to contact the helicopter on their frequency but did then make that contact on the air show frequency using a handheld radio but when he asked for the drop to be delayed he was told that it was not possible to delay as the parachutists were already on the skids outside the helicopter.

Soon after the dropping of the parachutists had commenced without the Arlanda controller being aware, the ATR 72 was approaching the ‘NAK’ NDB and advised taking up the hold at 2500 feet with the instructed initial right turn. The Bromma TWR controller then realised that the ATR 72 was beginning to approach the helicopter and contacted Arlanda. Upon being told that it had already been given clearance to turn right over NAK beacon, he asked for the aircraft to be advised instead to continue to final approach for runway 30 at Bromma. As the aircraft had not actually begun the right turn at this point and was still on heading of 350°, the Arlanda controller gave a left turn into a radar heading of 200°. This maintained the required separation against the helicopter but not the parachutists, the final three of whom passed through the aircraft altitude of 2500 feet at a range of about 300 metres. The Airspace Class involved was ‘C’ in which 1000 feet vertical and 3nm horizontal separation was the normal separation required between IFR and VFR traffic, but a general ATC requirement covering all parachute drops required a 5nm lateral separation between any aircraft from which parachutists had been dropped and all others.

It was noted that in respect of the hold at ‘NAK’ for which the aircraft had originally been cleared was depicted differently at the Arlanda ACC and on the Jeppesen Chart provided to the ATR72 crew. Both showed a left hand hold but the ACC (and AIP charts, see diagram below) had an inbound track of 209° whereas the Jeppesen Chart (see second diagram below) showed one of 283°. 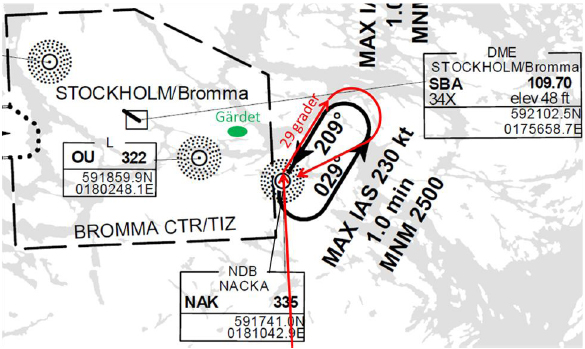 The Investigation concluded after reviewing all the evidence that the breach of prescribed separation which had occurred had arisen because “there were shortcomings in coordination and communication between Stockholm ACC South Sector and Bromma TWR on how to deal with the separation between the helicopter and (the inbound ATR 72)”. It was also found that “correct phraseology was not used in radio communications.” 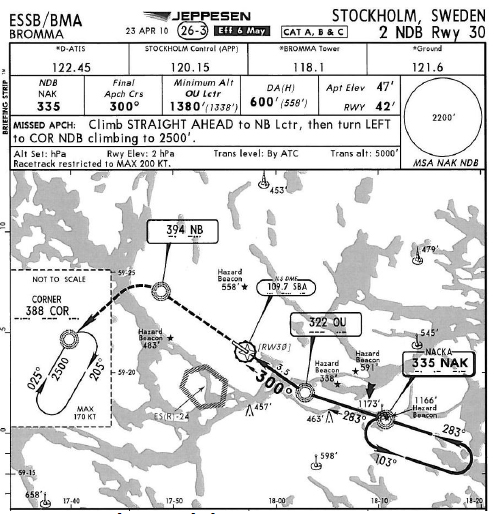 The Investigation formally concluded that the Cause of the incident was “deficiencies in planning and coordination between the air traffic control centres”.

The Final Report of the Investigation RL 2011:08e was completed on 17 August 2011 and subsequently published.