On 28 July 2018, a right engine compressor stall on an ATR72-500 bound for Port Vila followed by smoke in the passenger cabin led to a MAYDAY declaration and shutdown of the malfunctioning engine. The subsequent single engine landing at destination ended in a veer-off and collision with two unoccupied parked aircraft. The Investigation noted the disorganised manner in which abnormal/emergency and normal checklists had been actioned and found that the Before Landing Checklist had not been run which resulted in the rudder limiter being left in high speed mode making single engine directional control on the ground effectively impossible.

On 28 July 2018, an ATR72-500 (YJ-AV71) being operated by Air Vanuatu on a domestic passenger flight from Tanna to Port Vila. during which type conversion line training for the First Officer was being performed, suffered a sudden failure of the right engine that reportedly led to significant smoke appearing in the passenger cabin. A MAYDAY was declared on that account but an apparently unrelated landing accident subsequently occurred when the aircraft veered off the destination landing runway soon after touchdown and collided with two unoccupied parked aircraft. All three aircraft were damaged, but no occupants on the in-service aircraft were injured.

An Investigation was commenced by the Papua New Guinea Accident Investigation Commission (AIC) the day after the accident following delegation of the whole Investigation to the AIC by the Vanuatu CAA, who then supported it as necessary with guidance on applicable Republic of Vanuatu Civil Legislation. The aircraft 2 hour SSCVR, FDR and QAR PCMCIA card were all recovered from the aircraft and their data downloaded. It was found that the Digital Flight Data Acquisition Unit (DFDAU) feeding the FDR was programmed with an ATR Data Frame Version which did not comply with FAA requirements for transport category aircraft and also noted that the data recording system of the aircraft was not capable of recording some parameters of interest specified in the FAR including hydraulic pressure, brake pedal activation, trim commands and brake pressure.

Whilst en-route at FL160 and about 60 nm from destination, both crew and passengers reported having heard ‘loud bangs’ from the right hand side of the aircraft which the Captain had concluded were attributable to disrupted airflow in the right engine due to a compressor stall. The ITT indication for that engine was seen to rise rapidly and, on exceeding its limit, a corresponding alert was triggered. The Captain immediately took over as PF, retarded the (corresponding) power lever and instructed the First Officer to find the ‘ABNORMAL ENG PARAMETERS IN FLIGHT’ Checklist. He subsequently called the Senior Cabin Crew Member (SCCM) to acknowledge the occurrence and was told that “smoke was entering the cabin from the right side of the aircraft”. On hearing this, the Captain was recorded as exclaiming “Smoke!” and immediately making a ‘MAYDAY’ call to Villa ATC advising “we got cabin smoke” which when queried was followed by a repeat of the ‘MAYDAY’ and “engine smoke and we got an engine problem, we might have to shut it down”. He then notified that they were commencing descent.

One minute later, both pilots donned their oxygen masks and recommenced the ‘ABNORMAL ENG PARAMETERS’ Checklist. They had only completed the first item on it when the Captain interrupted the First Officer by calling the SCCM for an update on the reported cabin smoke and was told that “smoke was still entering the cabin” upon which he instructed her to don her Protective Breathing Equipment (PBE) and carry out the required cabin smoke procedures. He then made a PA asking all passengers to remain seated and await further instructions. Whilst he was doing this, an ‘ELEC SMK’ Warning was annunciated and although the previous Checklist had not been completed, he immediately instructed the First Officer to find the ‘ELECTRICAL SMOKE’ Checklist. He then requested Vila ATC to arrange for the RFFS to be on Standby for their arrival “as the smoke situation would require them to stop on the runway to evacuate passengers”.

Once the First Officer located this, he began to readout the title but progress was briefly interrupted when the Captain called the SCCM to advise that he would be making a ‘brace’ call shortly before touchdown. This Checklist was then completed. By now, the aircraft was within 5 nm of the airport and the Captain instructed the First Officer to refer back to the ‘ACW GEN 1+2 LOSS’ Checklist and continue with its ‘Before Landing’ section.

No significant weather conditions existed at Port Vila and descending through about 1,900 feet for a visual approach, the landing gear lever was selected down and the flaps selected first to 15° and then 30°. To achieve the required manual landing gear extension process, the Captain again briefly handed control to the First Officer and successfully extended the landing gear from memory before resuming control. Of note was that the normal ‘Before Landing’ Checklist was not run which resulted in the rudder Travel Limitation Unit (TLU) remaining locked in its high-speed mode where it was when the engine was shut down and not then being checked and manually operated prior to landing, which had the effect of significantly limiting rudder authority at low speeds.

A left turn onto finals for runway 29 was initiated and as the aircraft subsequently turned finals 1 nm from the threshold at a height of 330 feet, the Captain made a ‘Brace’ call on the PA. Touch down within the TDZ followed with immediate but brief selection of maximum reverse pitch which after a slight deviation left of the runway centreline was followed by a return of the power levers ground idle as the speed continued to decrease. About 200 metres further on, at a speed of 65 knots, the power levers were reselected into reverse setting and the aircraft immediately veered left and departed the side of the runway. It travelled for 320 metres over grass and across a taxiway before colliding, at a speed of about 45 knots, with two parked, unoccupied, BN-2 Islander aircraft, damaging all three aircraft and coming to an abrupt stop. As soon as the aircraft stopped, the Captain ordered an emergency evacuation which the cabin crew then conducted in an orderly and expedited manner with no consequent occupant injuries. 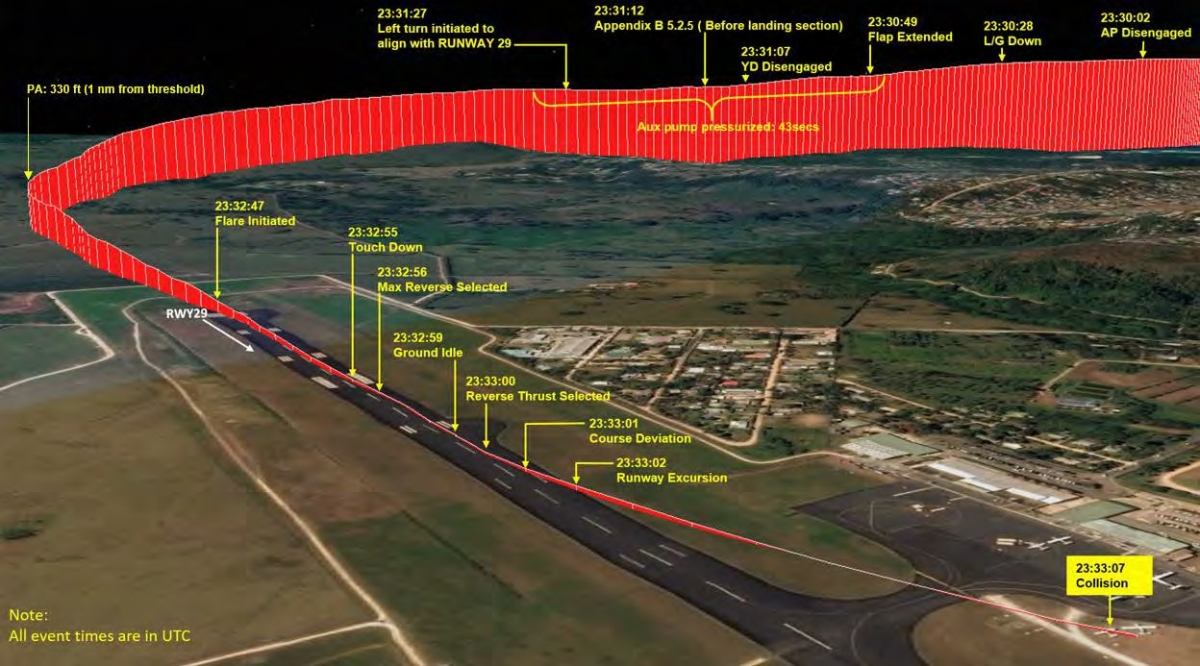 An annotated approach and landing flight path. [Reproduced from the Official Report]

Damage to the two parked aircraft (see the illustrations below) was considerable with the forward fuselage of one being completely destroyed and the vertical stabiliser and rudder being sheared off the other. The right hand side of the ATR72 sustained significant damage which included to the fuselage, engine, propeller assembly and main landing gear nacelle. 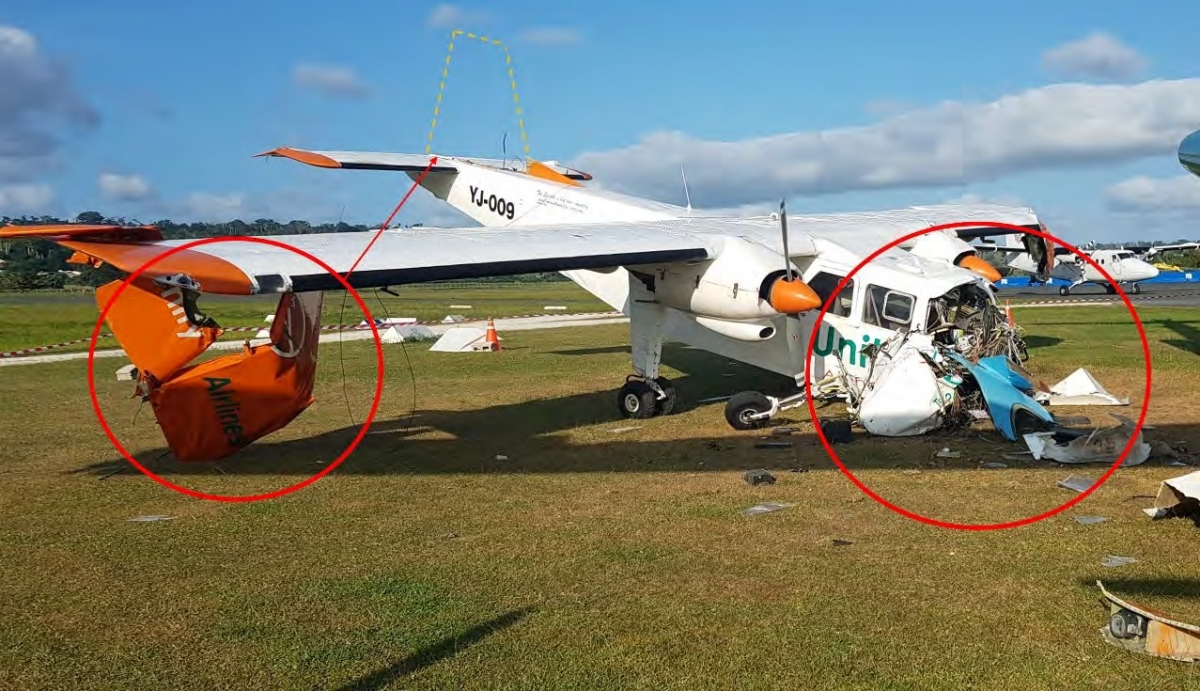 Damage to one of the parked BN2 aircraft. [Reproduced from the Official Report] 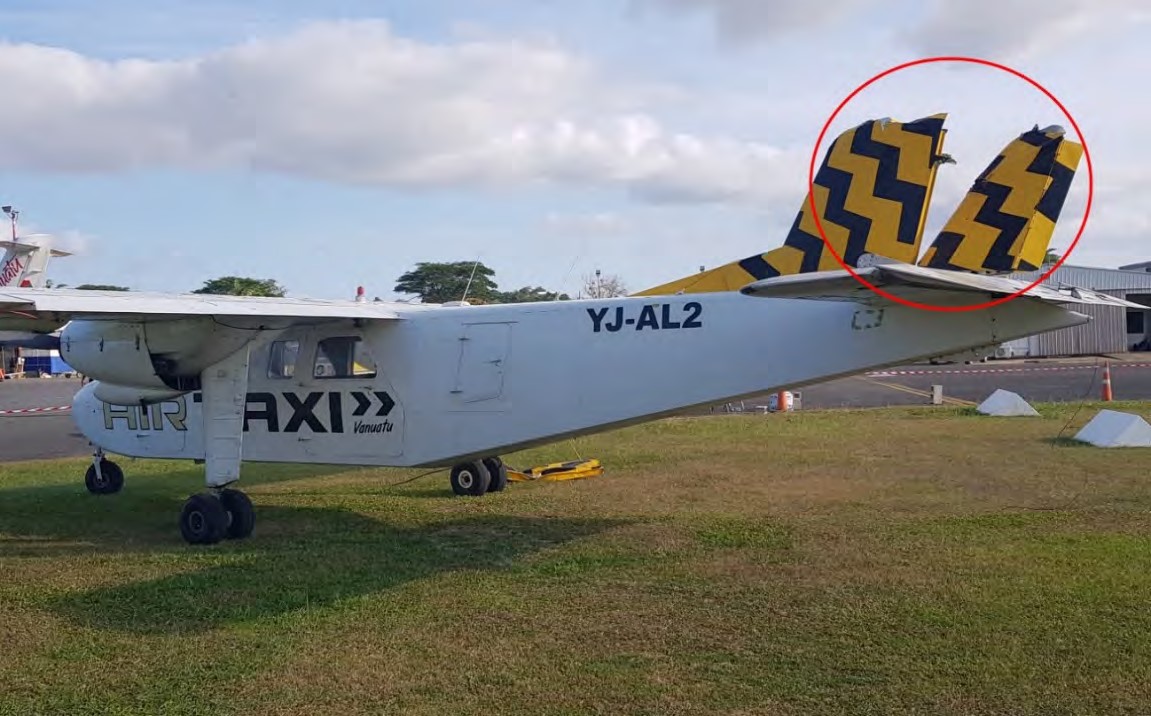 Damage to the other parked BN2 aircraft. [Reproduced from the Official Report] 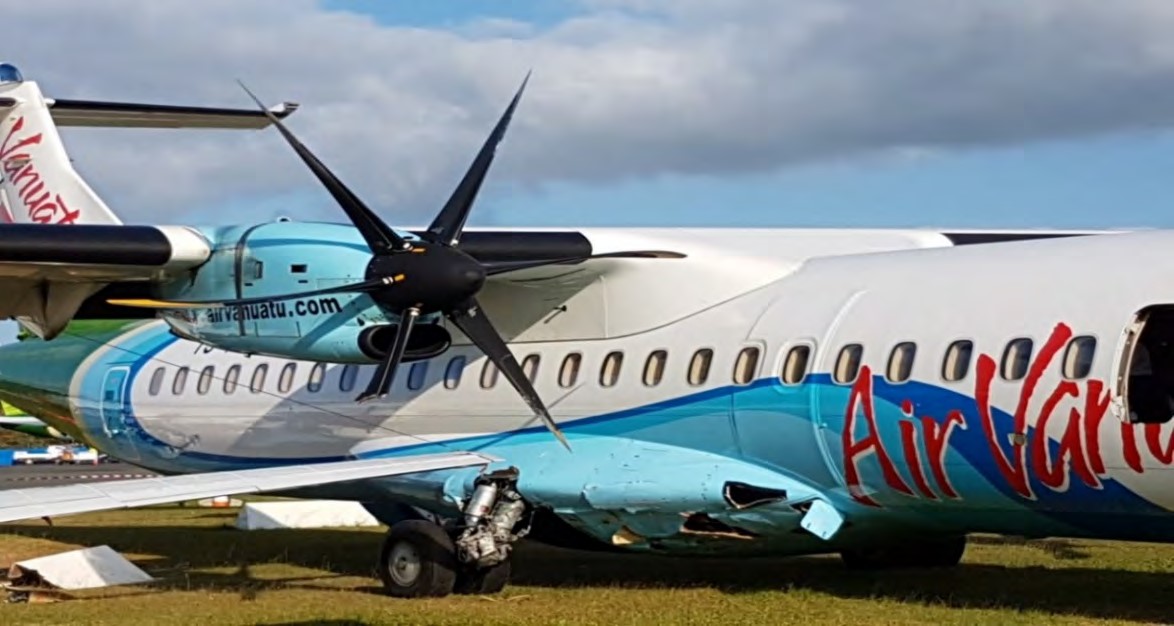 Damage to the right side of the ATR72. [Reproduced from the Official Report]

The Captain subsequently stated that he had “no directional control or brakes and could not stop the runway excursion or the subsequent collision”.

The investigation determined that despite the large difference in experience between the two pilots, neither of them had “adequate aircraft systems knowledge, particularly with regard to a smoke emergency” or “skill level” which contributed to a misdiagnosis of the smoke source and to the subsequent failure to select and action the right checklists in an orderly manner. It was noted that the Air Vanuatu SOPs included an explicit requirement to action checklists in such a way that “if a checklist is interrupted, reading must be resumed one step before the last read item” which was comprehensively ignored. However, it was ultimately of great significance that Normal Checklists were not completed once the in flight emergency had occurred since it was the failure to reset the rudder limiter manually to its low speed mode (giving +/- 27°of control instead of +/- 4°) which led directly to the loss of directional control when the Captain decided to use reverse pitch during the single engine landing on finding that, as alerted in one of the checklists which had been run in flight, normal braking (and in this case specifically differential braking) was not available.

The smoke event affecting the passenger cabin lasted almost 20 minutes but despite the Captain’s instruction to do so, the cabin crew did not don their PBE or provide wet towels to the passengers to help ease inhalation of the smoke. Once the Captain had declared a planned emergency landing, the cabin crew did not execute the required cabin preparation procedure. In general, the actions and inactions of the cabin crew during the emergency phase of the flight were not in accordance with either the applicable Cabin Crew Operations or Cabin Crew Training Manuals and specifically, they had not been aware of the smoke emergency procedure contained in them and had not been trained to execute all the actions required by this procedure.

The Investigation found that Air Vanuatu did not comply with its approved Pilot Check and Training Manual in respect of recurrent training. In particular given the incorrect use of smoke checklists during the investigated event, it was found that the Captain had not completed smoke training since May 2015. It was also found that this Manual “did not provide adequate guidance and emphasis on smoke emergencies”. Many other training areas that were reviewed were found non-compliant with the approved Air Vanuatu OM and it was concluded that “the lack of appropriate and regulated training” had contributed to the Captain’s poor tactical decision-making. The Investigation also noted that cabin crew emergency training had been inadequate.

The smoke reported in the passenger cabin was attributed to the vibration-induced fracture of the low-pressure diffuser case in the right engine in association with the number 3 bearing distress which allowed oil from the No. 3 bearing cavity into the air conditioning system.

Examination of the Rudder Travel Limitation Unit (TLU) found that rudder travel authority neutral position in the high speed mode had been incorrectly calibrated so that it was operative between -1° and +7° instead of in accordance with the AFM requirement for authority between +/-4°.

The Causes (Contributing Factors) of the accident were formally documented as follows:

The following 5 Safety Recommendations were made during the Investigation, the first four issued on 27 July 2019 and the fifth on 6 August 2019:

The Final Report of the Investigation was completed on 29 October 2019 and subsequently published. It was noted that at publication of this Final Report, neither ATR nor Air Vanuatu had informed the Papua New Guinea AIC of any Safety Action proposed or taken to address the safety concerns identified during the Investigation.