On 2 February 2013, an ATR 72-500 bounced repeatedly when making a night landing at Rome Fiumicino which, in the presence of dual control inputs causing a pitch disconnect, resulted in complete detachment of the landing gear and a veer off before stopping. The accident was attributed to uncharacteristic mishandling by the type experienced Captain in the presence of ineffective crew resource management because of an extremely steep authority gradient resulting from a very significant difference in flight time on the aircraft type (9607 hours / 14 hours). The Investigation attributed an unacceptable delay in the rescue services’ response to managerial incompetence.

On 2 February 2013, the crew of an ATR 72-500 (YR-ATS) being operated by Carpatair under contract to Alitalia on a scheduled domestic passenger flight from Pisa to Rome Fiumicino as AZ1670 lost control of their aircraft during a crosswind landing on runway16L at destination after making a stable ILS approach in night VMC. A series of four bounces resulted in failure of the landing gear and the departure of the aircraft from the runway before it came to a stop 30 metres from it facing the direction of the approach. Seven of the 50 occupants sustained minor injuries but the very significant damage to the aircraft made it an automatic hull loss. 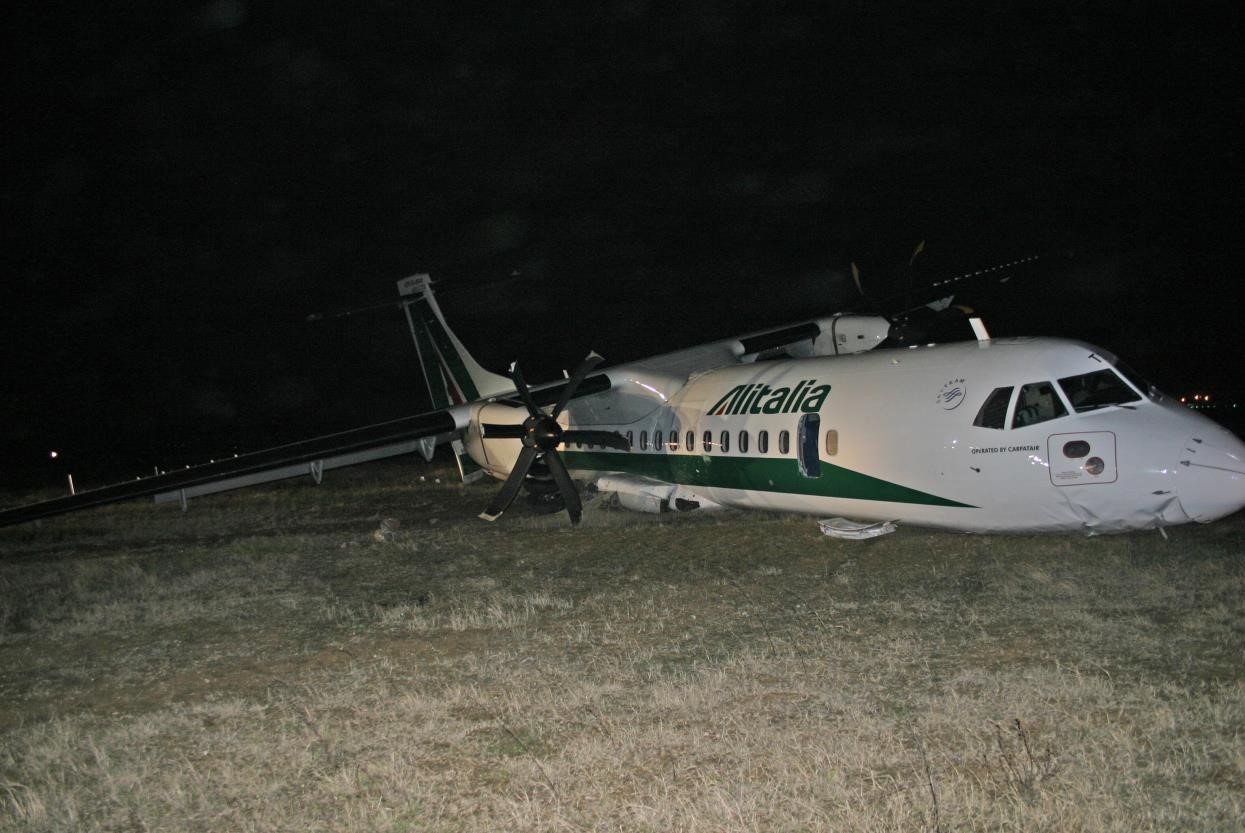 An Investigation was carried out by the Italian National Agency for the Safety of Flight (ANSV). The FDR and CVR were removed from the aircraft and their data successfully downloaded. Other relevant data including meteorological records and statements from all those involved were also available.

The 58 year-old Training Captain, who was acting as PF for the accident flight, was a Romanian national who had a total of 18,552 hours flying experience of which 9,607 hours were on type (3,351 of those hours being on the ATR72). He was also current as a TRI on the ATR42/72. He had begun flying for Carpatair on 14 December 2012 and had since flown 64 round trip flights exclusively on the Pisa-Rome Fiumicino route which the company was operating on behalf of Alitalia using an Alitalia liveried aircraft under a long term wet lease contract. He was accompanied by a 25 year old First Officer, also a Romanian national, who had a total of 624 hours flying of which 14 hours were on type. She had begun flying for Carpatair as a newly qualified ATR 72 pilot four days prior to the accident and the accident flight was the first sector of what would have been her 13th round trip on the Pisa-Rome Fiumicino route. It was noted that she was in her first job as a First Officer on a multi crew aircraft and that "she had gained much of her experience flying gliders and ultra light aircraft, experience which represented 350 hours out of her total of 624 hours” with much of the remainder accounted for by training for her CPL and Instrument Rating. The practical part of qualification for an ATR 42/72 type rating was recorded as primarily achieved through “approximately 36 hours” simulator time and therefore had required only a small amount of flight time.

CVR data confirmed that the Descent Checks were run as prescribed and thereafter, the CVR and FDR data showed that the flight had continued to proceed uneventfully and in accordance with applicable SOPs apart from the omission of a ‘Landing Briefing’. The VAPP applicable to the ELW for runway 16L at the intended flap 30 landing was found to have been 103 KIAS plus an increment of up to 15 knots to take account of wind gusts meaning a maximum of 118 KIAS. However, given the reference on the ATIS received by the crew to reports of windshear on final approach as well as a gusting crosswind, the Captain decided that he wanted to use 130 KIAS as his approach speed and having asked the First Officer if she was happy with that, he received an affirmative response. It was noted that whilst the ATIS-reported wind velocity the crew heard during their approach was 240°/22-38 knots, both these and METAR wind velocities were taken from a site close to the centre of the airport complex on the basis that this data would be ‘generally representative’ of airport conditions rather than specific to a particular runway, all of which had anemometers close to their thresholds.

Passing 1,000 feet on what was a stabilised approach throughout, the Captain then reminded the First Officer of his intention to maintain 130KIAS and again sought her confirmation that she was content with this which followed without hesitation. Soon after this exchange, landing clearance was given accompanied by a wind check of 250°/22-37 knots. (Editors Note: Wind velocity data included in the Investigation Report confirmed that this wind check was given from the airport central reference anemometer (see ‘Discussion’ below) rather than the more appropriate one close to the runway 16L TDZ) which was 2½ nm distant and recording much lower wind speeds.]  As touchdown neared, the Captain suggested that the First Officer should “follow through” on his control column inputs during the landing by resting her hands lightly on the control column.

Just over half a minute later, the aircraft touched down 560 metres beyond the runway threshold within the TDZ and close to the centreline but with the nose wheels making first contact - FDR data recorded a pitch attitude of -2.6° and an airspeed of 126 knots at this point. This contact was followed by a further bounced touchdown at approximately 740 metres beyond the threshold, again with the nose gear making first contact but this time with sufficient downward force to detach the nose landing gear leg. During this second touchdown, FDR data showed a sudden decrease of the propeller rpm and of the EGT which indicated that both engines had flamed out. The explanation for this was damage to the mechanical linkage of the power levers by the collapsing of the nose landing gear (see the diagram below).

During the interval between the first and second bounces, FDR data showed that opposing pitch inputs began to be made from both control columns, indicating that whether intentionally or not, the First Officer, having been instructed to “follow through” on her control column began making inputs opposite to the PF Captain which continued as two more bounces occurred. During the third bounce, at approximately 950 metres beyond the threshold, the left main gear collapsed and during the fourth and final bounce, at approximately 1,120 metres beyond the threshold, the right main gear collapsed. During this bounce sequence, the pitch disconnect mechanism was triggered (by design) so that the final control column inputs were made independently. 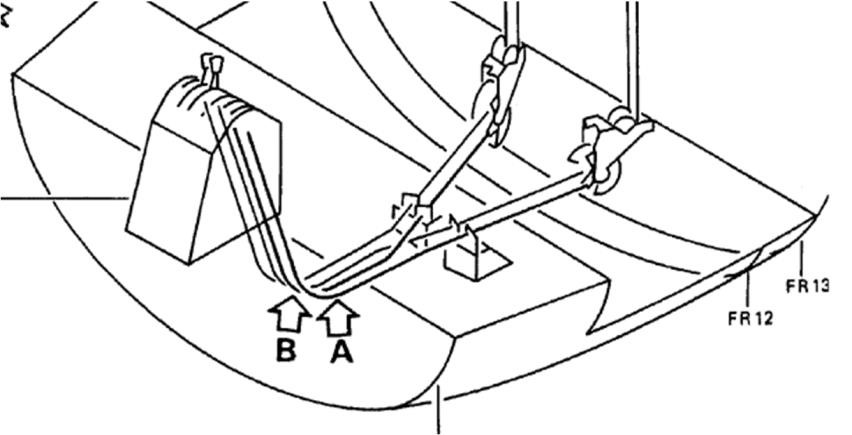 The risk to the integrity of the power (A) and propeller control (B) cables when the nose leg was forced upwards. [Reproduced from the Official Report]

After the final bounce, the collapse of all gear legs meant the fuselage was in contact with the runway and until it veered off the right hand edge of the runway after a further 400 metres, a continuous witness mark was left. This veer off appeared to have been a consequence of the right main gear collapse having been slightly more forceful so that after it occurred, the fuselage was tilted slightly to the right so that the right propeller was in contact with the ground causing friction which favoured rotation. Once on the grass in the vicinity RET ‘DE’ (see the illustration below) the turn continued as the ground speed reduced and, by the time the aircraft came to a stop, it was on a heading of 330°M, almost directly opposite to the approach direction. 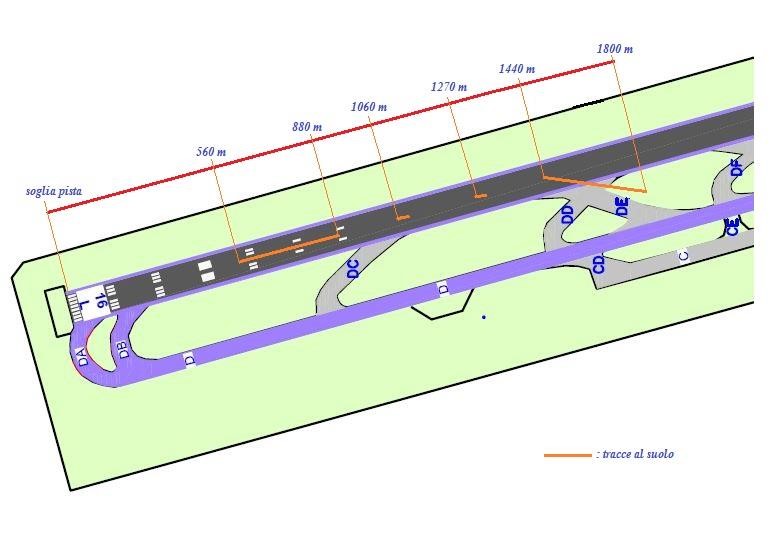 Witness marks left on the runway by the collapsed nose landing gear. [Reproduced from the Official Report]

As soon as the aircraft stopped, exactly 30 seconds after the first touchdown, the two cabin crew, with assistance from some positioning aircrew employed by another operator immediately began an evacuation and once off the aircraft, they waited for the first airport RFFS vehicles to arrive. All radio and intercom communication from the flight deck was found to have been disabled by the damage caused to the aircraft and so the First Officer was sent into the passenger cabin to assist with the evacuation. The TWR controller initially ordered aircraft on approach to runway 16L to make a go around in sequence and then, having not heard from the aircraft for almost a minute after it had come to a stop, activated the emergency alarm.

The first emergency service response - fire fighters, medical personnel and airport security staff did not arrive on the scene until 10 minutes after the activation of the emergency alarm because they were unfamiliar with airport terminology and had no idea where taxiway ‘DE’, given by ATC based on surface movement radar as the location near to where the disabled aircraft had stopped, was. This was considered surprising as the fire station was only 400 metres away on the opposite side of the runway almost directly opposite the aircraft and surface visibility was not limited. It was found that the Airport Fire Service had no idea where the aircraft was in relation to runway 16L and had simply driven up and down the runway and part of an adjacent parallel taxiway until they finally found it.

Whilst it was difficult for the Investigation to explain why what should have been a normal landing turned into an accident except in respect of detail within the 30 second sequence which began with the first bounced touchdown, analysis of the assembled evidence highlighted a number of points. Some of these are briefly summarised below in no intentionally significant order:

The recorded wind velocity on runway 16L. [Reproduced from the Official Report]

It was concluded that the Cause of the accident was “improper control of the aircraft by the Captain during the landing phase which was contrary to the relevant provisions of the Operations Manual and occurred in the absence of effective flight crew CRM”.

The Final Report was published on 4 December 2015 only in the Italian language and no official English language translation has since been forthcoming. This summary article has been prepared using an unofficial and unpublished translation which is not available but is believed to have facilitated an accurate depiction of the accident and the subsequent independent investigation of it.