On 25 September 2019, an ATR 72-600 about to depart from Canberra at night but in good visibility failed to follow its clearance to line up and take off on runway 35 and instead began its takeoff on runway 30. ATC quickly noticed the error and instructed the aircraft to stop which was accomplished from a low speed. The Investigation concluded that the 1030 metre takeoff distance available on runway 30 was significantly less than that required and attributed the crew error to attempting an unduly rushed departure for potentially personal reasons in the presence of insufficiently robust company operating procedures.

On 25 September 2019, an ATR 72-600 (VH-VPJ) being operated by Virgin Australia Airlines on a scheduled domestic passenger flight from Canberra to Sydney taxied out in normal night visibility on a clearance to line up and subsequently take off from runway 35 but instead entered and began takeoff from runway 30. ATC noticed the error and instructed the aircraft to stop which it did from a low speed with no consequences. The aircraft was subsequently repositioned for takeoff from runway 30 and departed without further event. The available distance on runway 30 was calculated to be insufficient for the aircraft to take off in. 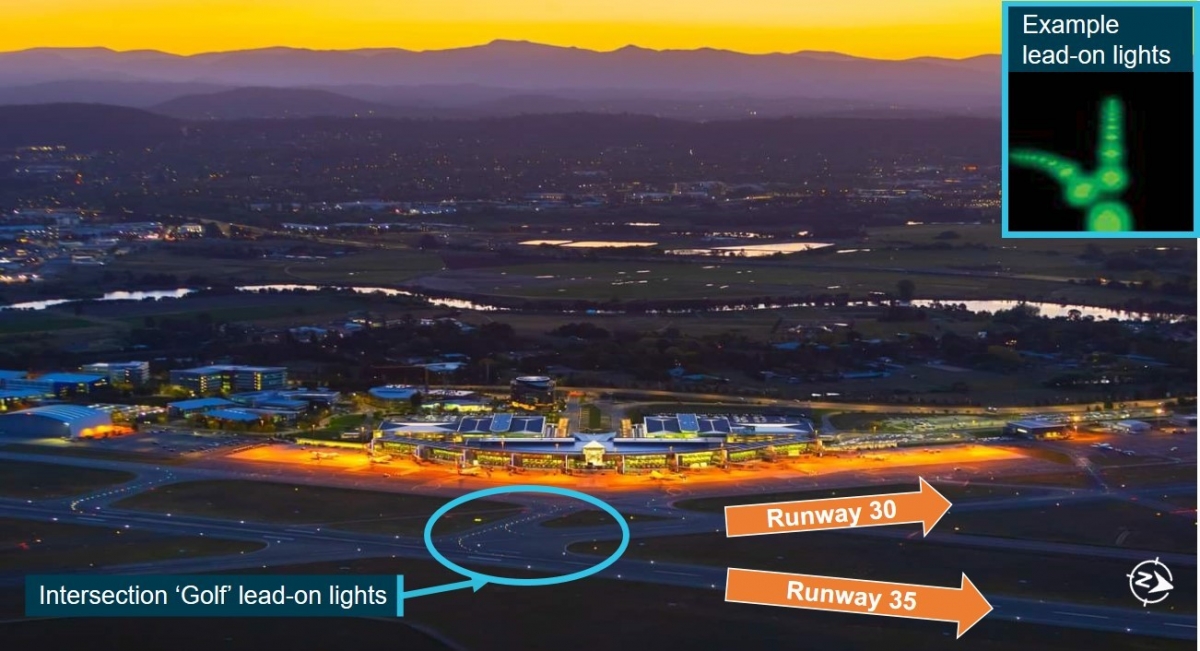 The Terminal showing its proximity to the runway intersection where the incursion occurred. [Reproduced from the Official Report]

An Investigation into the accident was carried out by the Australian Transport Safety Bureau (ATSB). Relevant aircraft flight data was available in support of the Investigation as was relevant recorded ATC data.

After pushback, the aircraft was cleared to taxi to intersection ‘G’ as explicitly requested. The taxi time was only around a minute and, as they approached the holding point which was common to both runway 35 and runway 30 (see the illustration below), the First Officer reported “ready” to TWR and the aircraft was cleared to line up on runway 35. Shortly after that, takeoff clearance was given and since neither pilot realised that they had actually lined up on runway 30, the power levers were advanced to the takeoff position and the aircraft began to move. However, at about the same time as the crew reported having realised that they were on the wrong runway, the TWR controller, although not having had originally noticed that the aircraft had lined up on the wrong runway, then saw it beginning to take off and immediately instructed it to stop, to which the First Officer responded with “stopping”. After repositioning, the aircraft subsequently took off from runway 35 without further event.

Access to both runways 35 and 30 from taxiway ‘G’ with the aircraft track shown in green. [Reproduced from the Official Report]

It was noted by the Investigation that:

No evidence was found that would indicate that either pilot was experiencing a level of fatigue known to have an adverse effect on performance. The Investigation therefore focused primarily on the consequences of the very short time between the aircraft beginning to taxi and beginning to take off, the reasons for the crew’s desire to minimise this time and the effectiveness of the operator’s relevant SOPs:

Six Contributing Factors, two of which were defined as ‘Safety Issues’, were identified as follows:

It was also formally recorded that the immediate response of air traffic control and the flight crew in rejecting the takeoff, reduced the risk of a runway overrun.

Safety Action stated by Virgin Australia Airlines to be intended as a result of this event in respect of their continuing (Boeing 737) flight operations - ATR 72 operations having since been discontinued - involves amending their Operating Policies and Procedures Manual to include reference to external cues, including runway signs and the localiser and changes to the 737 FCOM to add the following to required pre takeoff actions:

On the basis of the findings of the Investigation, the ATSB formally documented a Safety Message as follows:

The design of airport runways and taxiways vary from relatively simple to more complex layouts. This can be exacerbated by reduced visual cues, such as night-time or poor weather, which can easily increase confusion. It is important for all flight crew to familiarise themselves with these layouts, particularly any unique designs, and ensure effective flight crew co-ordination is employed to minimise the risk of a runway incursion.

Operators should ensure the design of their operating procedures minimises the risk of human error. Clearly delineating procedural steps may reduce the likelihood of flight crews’ heads down activities at critical moments throughout the flight.

The Final Report was released on 11 December 2020. No Safety Recommendations were made.