On 23 July 2015, an ATR72-600 crew suspected their aircraft was unduly tail heavy in flight. After the flight they found that all passenger baggage had been loaded in the aft hold whereas the loadsheet indicated that it was all in the forward hold. The Investigation found that the person responsible for hold loading as specified had failed do so and that this failure had not been detected by the supervising Dispatcher who had certified the loadsheet presented to the aircraft Captain. Similar loading errors, albeit all corrected prior to flight, were found by the Operator to be not uncommon.

On 23 July 2015, an ATR 72-600 (EI-FAVH) being operated by Stobart Air for an Aer Lingus Regional scheduled passenger flight from Dublin to Rennes was found after flight to have been mis-loaded to the extent that it had operated in a condition significantly outside its permitted flight envelope for all phases of flight despite the fact that the certified and accepted load and trim sheet showed the aircraft to have been within those limits.

An Investigation was carried out by the Irish AAIU. It was based on interviews and written reports from the Captain and ground crew involved in the handling of the aircraft departure from Dublin.

It was established that the aircraft had been towed to the departure stand and had arrived there approximately 15 minutes prior STD and that loading of checked bags had commenced six minutes later. The boarding of 57 passengers and loadsheet acceptance was completed quickly enough for the flight to be pushed back from the stand on schedule. The Captain, who was PF for the flight subsequently reported that the aircraft had “felt tail heavy on take-off” and that after departure, the crew had checked their copies of the Loadsheet and the Loading Instruction Report (LIR), which both indicated that all passenger baggage was in the forward hold. He also reported having briefed the First Officer that the landing would be “somewhat flat due to the tail heavy condition" although the subsequent landing at Rennes was uneventful.

Once the aircraft had been shut down on stand, it was discovered that all 32 bags weighing 421 kg had actually been loaded in the aft hold. It was noted that external access to the aft hold is from the right hand side of the aircraft via a ‘service door’ of similar dimensions to the main passenger door directly opposite on the left hand side whilst access to the forward hold is from the left hand side via a much larger upward-opening door.

It was found that overall responsibility for determining hold loading and ensuring that it was achieved lay with the Dispatcher assigned to oversee all aspects of the departure by the operator’s ground handling contractor. A “Lead Agent” also employed by the contractor was then responsible for loading the aircraft in accordance with the LIR as completed by the Dispatcher and signing it to that effect upon task completion before returning it to the Dispatcher. The Lead Agent was assisted by a Second Agent.

The Lead Agent stated that he had arrived at the stand as the aircraft was being towed onto the stand and to assist in achieving an on time departure, he had permitted the catering to be loaded (via the aft service door) before the loading of the baggage was commenced. He reported having “believed that the baggage was to be loaded in the aft hold but acknowledged that he did not check the LIR”. He also reported believing “that the Dispatcher had told him to load all bags in the aft hold (but) he could not be absolutely sure of this as he had previously handled four other flights that morning and said he could have been mistaken”.

The Dispatcher reported that the LIR for the flight had been prepared by the Contractor’s ‘Station Controller’ on his behalf because he had been delayed on a previous flight. The LIR indicated that all bags were to go in the forward hold and having checked the aircraft trim on the loadsheet based on the LIR, he had noted that it had been “well within limits”. He had arrived at the stand prior to the aircraft and reported having had “a briefing with the Lead Agent confirming the correct stand and aircraft registration (and had) handed the LIR to the Lead Agent verbally confirming all bags were to be loaded in the front”. He reported that the Lead Agent had asked if some transfer bags which were on the ground near the forward hold could be loaded and had confirmed that they could be. The Dispatcher then donned and used the ground/aircraft headset as the aircraft was being refuelled whilst the passengers were boarding and from this position he could not see the aft hold door. He subsequently received the signed LIR from the Lead Agent showing that the total number of bags actually loaded by hold location was as specified and entered the total baggage weight of 421 kg alongside the 32 bags specified for the forward hold “but did not confirm with the Lead Agent that the bags were indeed loaded in that hold nor did he visually check the holds before departure”. He subsequently commented that on completion of passenger and baggage loading, the tail strut may have been closer to the ground (10-15 cm) than normal and that when he passed the load paperwork to the Captain through the flight deck access hatch, it had seemed quite high but that at the time, “this did not give him any cause for concern”.

The weights of the loadsheet certified by the Dispatcher and accepted by the aircraft Captain were (see the illustration below) well within the permitted flight envelope but with the aircraft as actually loaded were not.

It was noted that in a period of just over two years following the investigated event, “the Operator reported 16 occurrences […] where baggage was placed in the wrong hold during loading” spread across a variety of airports with five of these occurring more than once at the same location and at one location occurring four times. In just one of these cases, a check of documentation post flight identified that an aircraft was loaded correctly but that the loading given on the loadsheet differed from that given on the LIR and in all the others, incorrect loading was identified by the Captain prior to departure and hold loading corrected.

The Findings of the Investigation included that: 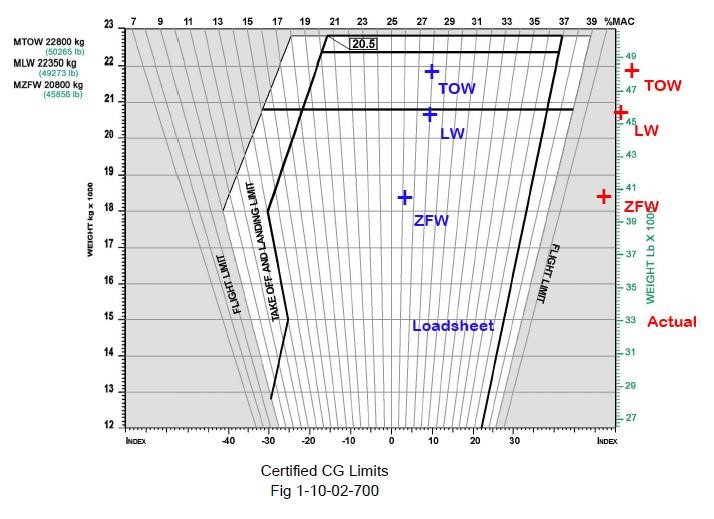 The Probable Cause of the Serious Incident was determined as “passenger baggage was loaded into an incorrect hold”.

Safety Action taken by the Aircraft Operator as a result of the event and known to the Investigation was noted to have included revisions to its procedures in respect of mandatory loadsheet checks, visual checks of holds following loading, changes to Last Minute Change (LMC) procedures and a redesign of the LIR.

The Final Report of the Investigation was published on 9 February 2018. Recognising the “on-going initiatives by the Operator to prevent similar events occurring”, no issues that would support the making of any Safety Recommendation were identified.