On 6 July 2018, an ATR 72-600 followed an unstable approach at Fez with a multiple-bounce landing including a tail strike which caused rear fuselage deformation. The aircraft then continued in operation and the damage was not discovered until first flight preparations the following day. The Investigation found that the Captain supervising a trainee First Officer as handling pilot failed to intervene appropriately during the approach and thereafter had failed to act responsibly. The context for poor performance was assessed as systemic weakness in both the way the ATR fleet was being run and in regulatory oversight of the Operator.

On 6 July 2018, an ATR 72-600 (CS-DJG) being operated by White Airways for TAP Express on a scheduled international passenger flight from Lisbon, Portugal, to Fez, Morocco, as TP1428 with First Officer line training in progress made a multiple bounce hard landing in day VMC at destination. During the landing the lower rear fuselage hit the runway and sustained deformation damage. The aircraft was then operated back to Lisbon in service whilst not airworthy due to the damage which was not noticed until the following morning prior to the intended first flight of the day, at which point it was withdrawn from service for repair. The Senior Cabin Crew Member (SCCM) sustained a minor back injury as a result of the impact of the fuselage with the runway, but the other 61 occupants were uninjured.

The Portuguese Air and Rail Accident Investigation Agency (GPIAAF) was notified of the event by the BEA Morocco, which delegated the conduct of the necessary Accident Investigation to Portugal. It was noted that the GPIAAF only became “formally aware” of the accident when it “received a brief description of the event and the actions taken by the Operator with the aircraft ferried to Cascais and subsequent contact with the manufacturer”. The FDR and CVR were both removed from the aircraft but useful data could only be downloaded from the FDR as relevant CVR data had been overwritten.

It was found that the 47 year-old Training Captain had a total of 5,734 flying hours which included 2,956 hours on type. He had held an ATPL for 4 years and had been employed by the airline as a direct entry Captain in October 2016. It was noted that at that time, he had been permitted to act as an aircraft commander after just 3 supervised flights which, along with most other elements of the Company induction process, was not in compliance with that process. It was observed that “direct commander entry, within a short time interval, does not promote the correct understanding of procedural information, operator policies and culture to commanders, who in return, cannot actively contribute to spread the message to the new co-pilots arriving at the operator”. It was the Captain’s first flight with the trainee First Officer but he was aware from her training file of her continuing difficulties in manual handling of the aircraft.

The 33 year-old trainee First Officer who had been PF for the accident flight, had a total of 269 flying hours which included 47 hours on type and, having been employed by the operator four months earlier, was in her first job as a professional pilot. She had been signed off the day prior to the accident by the Operator’s Safety Manager as able to continue training without a safety pilot after completing 26 line training sectors.

An ILS approach to the 3,200 metre-long runway 27 at Fez was being flown in relatively benign weather conditions - the ATIS gave surface wind velocity of 350°/8 knots in CAVOK (cloud and visibility OK) conditions. The approach proceeded normally until the AP was disconnected at 1300 feet aal but thereafter the achieved vertical flight path became somewhat erratic compared to the ILS GS and the PAPI and the airspeed varied both above and below the calculated VAPP. The Captain made two “Speed” calls but took no other action as the approach continued to be unstable.

As the aircraft passed DA, the aircraft was on the ILS GS and descending at 800 fpm at VAPP + 7 knots with 25% torque set. This rate of descent continued to 80 feet agl and at 50 feet agl, the flare was commenced with the torque at 3% and the pitch angle increased to 6.4°. At 20 feet agl, the PM applied back pressure to his control column whilst the First Officer continued to hold almost the same pressure on hers. Neither pilot added any power to reduce the rate of descent and a first touchdown occurred 350 metres past the threshold at a recorded +2.88g with a tail strike. A momentary bounce was followed by a second touchdown at +1.4g and after a second momentary bounce the final touchdown followed and the landing roll and taxi in continued without further event.

The Investigation’s examination of the aircraft found that readily visible damage to the rear fuselage was evident to both the tailskid assembly and the underside of the rear fuselage. This was subsequently found to have resulted in “permanent deformation of the fuselage between frames 35 and 38”. Deformation of frame 39 next to stringer 21RH, superficial damage to frame 36 between stringers 21LH and 21RH was also found as was the fact that the rivets of frame 39 had been sheared off between stringers 20RH and 21RH. Since the airport authorities at Fez were unaware of the fuselage/runway impact at the time, no precautionary runway inspection was carried out, although when it eventually was, it was reported that no evidence of such damage was found.

Once the passengers had disembarked, the Captain walked to the rear of the passenger cabin in order to carry out the required external pre flight inspection and when nearing the main exit observed a ceiling panel near to the SCCM station which had detached during the hard landing and refitted it in the presence of the cabin crew “without commenting or explaining what (had) happened during the landing”. He then completed his inspection - in his own words - “without detecting any anomalies in the aircraft”.

The Captain stated that he had subsequently attempted to access the ‘g’ loadings recorded on the airplane condition monitoring system (ACMS) during the landing but had been unable to do so. He therefore made no defect entry in the Aircraft Technical Log either at Fez (where there was no contracted engineering support) or on arrival in Lisbon on what was the final flight of the day. At no time prior to or after the flight back to Lisbon did the Captain make any attempt to contact any company flight operations or engineering personnel to report the hard landing.

The context for the Accident and its aftermath was analysed in depth and the following were some of the (summarised) issues looked at in relation to White Airways’ operation of their ATR 72-600 fleet: 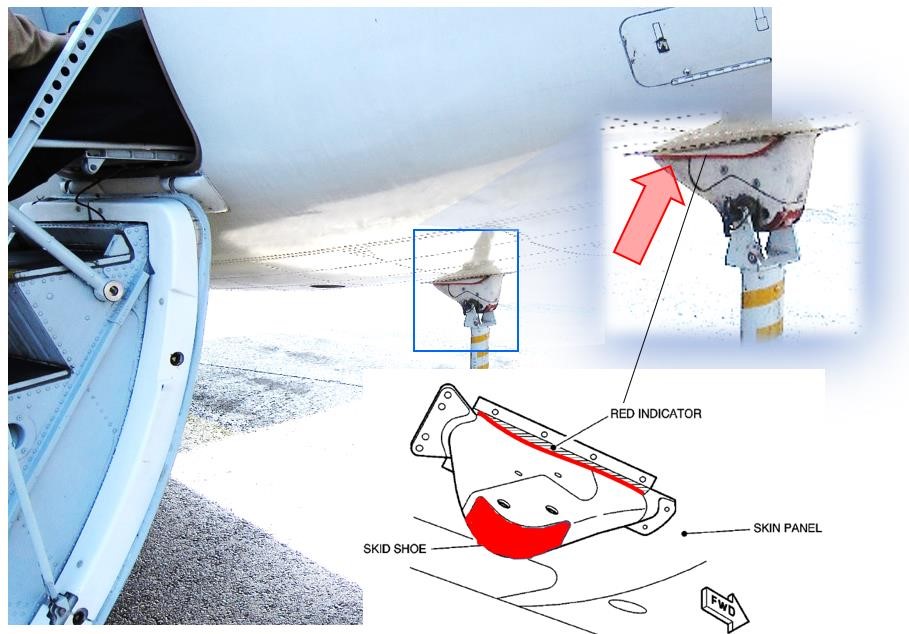 The tail skid in its normal condition. [Reproduced from the Official Report]

Formally documented Findings included, but were not limited to, the following:

The Probable Cause of the Accident was formally determined as “the flight crew performance during the landing manoeuvre, namely with poor aircraft energy management while performing an unstable approach".

Four Contributory Factors were also identified in respect of the crew performance during the landing in Fez:

Two further Contributory Factors were also identified in respect of the crew decision process to make the return flight to Lisbon:

Safety Action: It was noted that during the course of the Investigation, White Airways had taken, in conjunction with its contract provider TAP, “actions to ensure that TAP ground service providers operate in accordance with approved and distributed procedures, including the specificities of aircraft type used at each line station”.

Six Safety Recommendations were made as a result of the Investigation and are reproduced below preceded by the following statement which introduced them:

The operator management system did not prepare or protect the fast-growing operation that was experienced with the introduction of the ATR fleet operating for TAP Express. This coincided with a period in the aviation industry with the highest demand for pilots that caused high rotation and significant shortage of pilots in the operator. As business pressure increased, the organization's vulnerabilities were exposed. The lack of documented or adequate procedures for the size of the operation is the first example of an organisation with misfit growth.

The relevant operational safety aspects identified in this report regarding not only the hard landing event, but especially how the consequences have been managed, show systemic failures in the operator safety management system and in the oversight process by ANAC, as certifying authority.

Due to the wide range of safety issues addressed, there was a need to concentrate and group the respective safety recommendations on the operator and the National Aviation Authority.

The Final Report of the Investigation was published on 27 December 2019.