On 22 October 2016, an ATR 72-600 Captain failed to complete a normal night landing in relatively benign weather conditions and after the aircraft had floated beyond the touchdown zone, it bounced three times before finally settling on the runway in a substantially damaged condition. The Investigation noted that touchdown followed an unstabilised approach and that there had been little intervention by the First Officer. However, it tentatively attributed the Captain s poor performance to a combination of fatigue at the end of a repetitive six-sector day and failure of the operator to provide adequate bounced landing recognition and recovery training.

On 22 October 2016, an ATR 72-600 (CS-DJF) being operated by White Airways on wet lease to TAP and operating a scheduled TAP Express passenger flight from Porto to Lisbon TAP1971 failed to complete a normal touchdown on runway 21 at destination in night VMC and after three bounces finally stopped just after the intersection with runway 17/33 having sustained substantial damage. All 24 occupants were uninjured and with no emergency evacuation deemed necessary, passengers were eventually disembarked to buses. Minor damage was also caused to the runway surface by wheel rim and collapsed landing gear assembly contact. 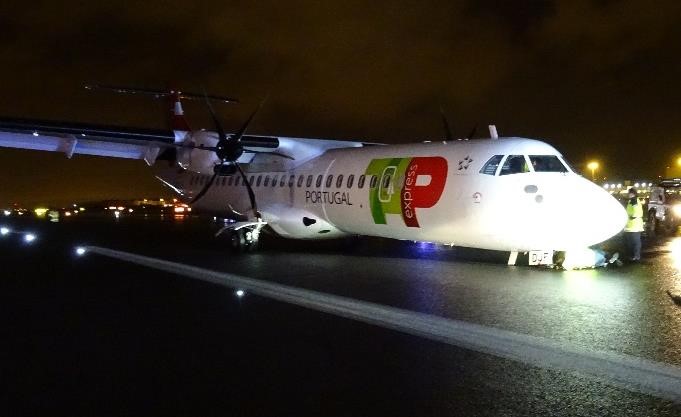 The event was notified to the Portuguese Air and Rail Accident Investigation Agency (GPIAAF) which carried out an Investigation. The FDR and CVR were both removed from the aircraft and their data successfully downloaded the following day.

It was established that the accident flight was the crew’s sixth and final sector of the duty which had consisted of three return flights from Lisbon to Porto. The cruise was made at FL 150 and Lisbon TAF current for the ETA gave the expected weather as 210/13kt, visibility 10km, scattered cloud at 800 feet and a ceiling at 1300 with the runway expected to be wet. It was noted from the CVR that during the flight, the pilots had engaged in non-operational conversation contrary to the ‘sterile flight deck’ policy contained in the company OM.

On arrival at Lisbon, the flight was cleared for an ILS Cat 1 approach to runway 21 in IMC with rain and moderate turbulence. For the ELW of 17 tonnes, the First Officer calculated a VAPP of 101 knots. Landing clearance was given with the spot wind 250/12knots. One minute later, passing 320 feet agl, the AP was disconnected and shortly thereafter a further wind check was given - 240/09 knots gusting up to 22 knots. With the aircraft still above 1000 feet agl and 15 knots above the calculated and displayed VAPP, the First Officer called ‘SPEED’ as per SOP, but there was no response. Between 1000 feet agl and 300 feet agl, the recorded airspeed varied between 106 knots and 94 knots. From 35 feet agl, the rate of descent was reduced and at 15 feet agl, the aircraft began to fly level over the runway. At 10 feet agl, power was reduced to Flight Idle at 118 KCAS and the first touchdown occurred 700 metres past the threshold of the 3,805 metre-long runway.

The aircraft bounced and a second touchdown occurred 150 metres further along the runway 3 seconds later, this time initially on the nose landing gear which partially collapsed because the axle had broken and one of the wheels had separated from it. The aircraft bounced again with the recorded airspeed still 105 knots and then after two seconds airborne touched down for a third time again on the nose landing gear first which caused the remaining wheel to separate and the nose landing gear to completely collapse. A third bounce again lasting two seconds began with a recorded speed of 98 knots and this time the aircraft settled on the runway in a “porpoise landing” 1660 metres from the threshold and 6 metres left of the centreline just after crossing the intersection with runway 17/35.

The Captain requested assistance through TWR and shut the engines down before leaving the First Officer to complete the ‘On Ground Engine Fire or Severe Mechanical Damage’ Checklist without participating as he “remained for some moments without reaction”. The Captain then determined that both passengers and crew “were safer inside the aircraft rather than ordering an evacuation using the emergency exits” although it was not established whether passengers were kept informed whilst waiting 40 minutes for a bus to arrive and take them to the terminal.

Almost an hour after the accident, a NOTAM was issued notifying the closure of both runways but eight minutes later, it was decided that runway 17/35 could be re-opened and the first aircraft to use it landed 20 minutes later just after the GPIAAF team had arrived to begin the Investigation.

Apart from the collapse of the nose landing gear, the left main landing gear assembly sustained sufficient damage to also require replacement. In addition, there was also considerable damage to the lower part of the forward fuselage and minor damage to some propeller blades and to the central fuselage fairing.

The Investigation found no evidence that the accident was attributable to anything other than the performance of the flight crew in respect of their failure to follow SOPs, in particular the requirement to discontinue an unstabilised approach. It also concluded that the operator had not provided effective bounced landing / recovery training and that the Captain’s performance may have been affected by the onset of fatigue. It was noted that the crew of the aircraft which landed ahead reported that the wind was steady in the reported direction, that there were no unusual conditions and that although the final approach was hard work, soon after crossing the runway 21 threshold, the somewhat turbulent air movement decreased significantly.

The formally-documented Findings in relation to the operation of the aircraft included the following:

In respect of the post-accident response by the airport operator, some issues needing attention were identified:

The Probable Cause of the Accident was formally documented as “the decision of the Captain to continue with a landing after not complying with the stabilised approach criteria, air speed being well above the reference VAPP”.

One Contributory Factor was also identified as “fatigue may have affected the Captain’s performance”.

The Final Report of the Investigation was completed on 14 March 2019.