On 9 July 2018, an ATR 72-600 continued a non-precision approach to Al Hoceima below the procedure MDA without obtaining visual reference and subsequently struck the sea surface twice, both times with a vertical acceleration exceeding structural limits before successfully climbing away and diverting to Nador having reported a bird strike. The Investigation attributed the accident to the Captain’s repeated violation of operating procedures which included another descent below MDA without visual reference the same day and the intentional deactivation of the EGPWS without valid cause. There was significant fuselage structure and landing gear damage but no occupant injuries.

On 9 July 2018, an ATR 72-600 (CN-COH) being operated by RAM Express, a wholly owned operating subsidiary of Royal Air Maroc (RAM), on a scheduled domestic passenger flight for the parent company from Tangier to Al Hoceima as RAM439 hit the sea surface twice in quick succession whilst on approach to destination in day IMC before successfully climbing away and, after reporting a bird strike, diverting to Nador where substantial structural and landing gear damage which rendered the aircraft unfit for flight pending major repairs was found. None of the 58 occupants were injured by the impact. 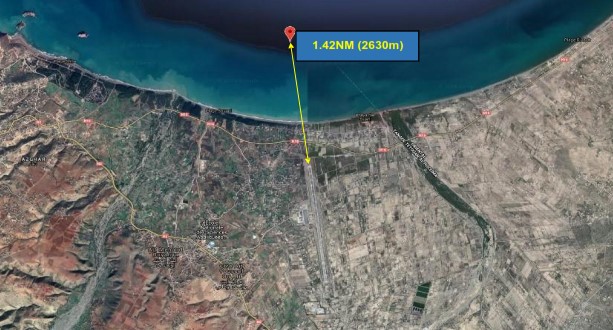 The position of sea surface impact on the approach runway extended centreline. [Reproduced from the Official Report]

An Investigation into the Accident was carried out by the Moroccan Bureau d’Enquêtes et Analyses (BEA) in accordance with ICAO Annex 13 principles. The FDR and 2 hour CVR were both removed undamaged from the aircraft and their relevant data were subsequently downloaded successfully.

The flight sequence operated by the aircraft and crew on the day of the accident was planned as Casablanca - Al Hoceima - Tangier - Al Hoceima - Casablanca. Before commencing the first of these flights, the crew agreed that the Captain would act as PF for the first leg and then revert to acting as PM for the remainder.

During the first flight, in the cruise at FL160, an EGPWS ‘TERRAIN’ annunciation was displayed and the amber “TERRAIN FAULT” light was illuminated, a system activation which indicated temporary loss of the system’s ‘enhanced’ modes and which was assessed as “probably linked to a degradation of the GPS signal”. This annunciation lasted a little over 6 minutes. The crew subsequently planned for and commenced an RNAV approach to runway 17 at Al Hoceima having noted that the reported ceiling was 800 feet aal. On reaching the procedure MDA of 1,030 feet, the Captain was “unable to see the runway” but decided to continue the descent anyway with a rate of descent of around 1000 fpm. One minute later, the EGPWS ‘TERRAIN AHEAD, PULL UP’ warning was activated with the aircraft 1760 metres from the intended landing runway threshold and just 60 feet above sea level. The Captain responded by pitching up and adding power and after reaching a recorded minimum height of 45 feet above the sea surface, the aircraft climbed to a recorded height of 108 feet and maintained this until the runway was acquired visually and landed. The second flight was then competed without further event.

Because of the relatively short flight time for the third, Tangier to Al Hoceima, sector, the approach briefing for Al Hoceima was carried out on the ground in Tangier based on a VOR/DME approach to runway 17 (see the illustration below) for which the MDA was 760 feet. The Captain was recorded explaining to the First Officer that “if the runway is not in sight at the MDA, we will descend until a height of 400 feet which will then be maintained until the runway is in view and that if the runway is still not in sight at 2 nm from the VOR, it will be necessary stop the approach and make a go around”. In addition, the Captain was recorded as accepting, after consulting the DDM (Dispatch Deviation Manual), the First Officer’s suggestion that the GPWS should be disabled so as to avoid alarms being activated during the descent and approach “because they think that those emitted by this system, during the first flight were untimely”.

The flight proceeded normally and, after a six minute cruise at FL 130 during which the (PM) Captain had further discussed the plan for the approach - which would involve establishing directly onto the FAT (final approach track) - with the First Officer and had given corresponding instructions in respect of it. Descent as cleared to FL 060 was commenced and Al Hoceima TWR contacted and the intention to make a VOR/DME approach for runway 17 agreed. The Captain then reminded the First Officer of the manoeuvres to be executed in the event of a go-around and stated that during the approach, he would “take care of the monitoring of speed and water” whilst the First Officer controlled the flight path.

Re-clearance to 3000 feet on QNH was given and the selected altitude set accordingly and the rate of descent to 1,500 fpm then to 1,300 fpm. The approach checklist was run and passing 4500 feet QNH, with the aircraft 11.5 nm from runway 17 threshold at 230 KCAS, the Captain de-activated the EGPWS and reminded the First Officer to select more flap to increase the rate of descent. 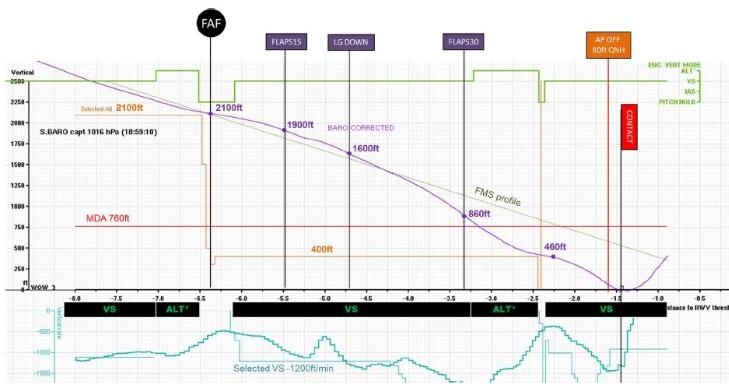 The VOR/DME 17 Approach Plate for Al Hoceima. [Reproduced from the Official Report]

As the heading was set to establish on final approach, the Captain told the First Officer to reduce speed from 220 knots and the First Officer set 170 knots. TWR then gave them the latest weather as “wind calm, visibility four thousand in mist, overcast at 600, temperature 23, dew point 23, QNH 1016" which the Captain acknowledged. With the aircraft established on the procedure radial and approaching the procedure vertical profile as the speed reduced through 188 KCAS, a selected altitude of 400 feet was set, and V/S mode engaged with a 1200 fpm rate of descent.

Passing 1800 feet QNH, the flaps were selected to 15° and the selected speed was 140 knots as the Captain confirmed “fully established” to TWR and the flight was cleared to land. On request from the First Officer, the Captain selected the landing gear down and was recorded telling the First Officer to “go, go to the limit". The selected rate of descent was progressively increased to 1800 fpm and flaps 30° selected. With 3.3 nm to go, the altitude capture mode engaged 400ft before the selected (400 feet) altitude was reached because of the commanded 1800 fpm descent. As 400 feet was approached with the indicated speed now reduced to 125 knots but the runway still not in sight, the Captain was recorded saying “we continue to 300” and the selected vertical mode was changed from the just-engaged ‘pitch hold’ back to V/S with a 1000 fpm rate of descent. The Captain said “keep on going” but passing 310 feet at 121 KCAS, the aircraft was still 2 nm from the runway.

Eight seconds later at 135 feet above the sea surface and an indicated speed of 128 knots, the First Officer said “it's not normal” and then spoke in Arabic, his native tongue, "now take it in manual" and disconnected the AP at a height of 80 feet, began to apply back pressure to his control column and increased power. However, at the same time, the Captain began an opposite input to his control column which neutralised the attempt to climb and a couple of seconds later, the aircraft hit the sea surface twice in quick succession, the first time with an impact which registered a maximum vertical acceleration during impact of 3.2 g and the second, at a -3° pitch attitude, which registered 3.9 g. After a few seconds, the Captain stopped his pitch down and the First Officer was able to increase his pitch up sufficiently to establish the aircraft in a recovery climb.

The Captain advised Al Hoceima TWR that the aircraft had made a go around and would divert to Nador. When the controller queried the reason for the go around, the Captain responded that it followed a bird strike which was not true. On arrival at Nador, a visual inspection of the aircraft found that serious structural damage had been sustained to the lower fuselage in the vicinity of the main landing gear which itself was subsequently, along with the nose landing gear, confirmed to have exceeded the maximum certified load and therefore required replacement. The Captain’s initial report to the aircraft operator maintained the bird strike story but this was subsequently corrected to advise contact with the sea surface prior to the go around.

Detail of the recorded vertical acceleration and height above the sea during the impact phase. [Reproduced from the Official Report]

In addition to the flagrant breaching of the MDA on both approaches to Al Hoceima, it was noted that the RAM Express OM was unequivocal on the requirement for all approaches in IMC to be stabilised by 1000 feet aal, on what constituted ‘stabilised’ and on the automatic requirement to go around if not stabilised.

The formally-stated Conclusions of the Investigation included, but were not limited to the following:

The Probable Cause of the Accident was formally determined as “non-compliance with operational procedures, in particular; the deliberate deactivating of the EGPWS, the continuation of an unstable approach below the applicable stabilisation gate and the continuation of the approach below the applicable minima in the absence of visual reference with only the First Officer’s reaction, even though it was late, making it possible to limit the outcome to no more than significant damage to the aircraft”.

Contributory Factors were also identified as:

Safety Action taken by RAM Express whilst the Investigation was in progress was noted as having included:

The Final Report of the Investigation was released online on 12 July 2020 and has been published only in French. This summary of it is based solely on an unofficial translation of the content of that Official Report.