On 4 February 2015, a TransAsia Airways ATR 72-600 crashed into the Keelung River in central Taipei shortly after taking off from nearby Songshan Airport after the crew mishandled a fault on one engine by shutting down the other in error. They did not realise this until recovery from loss of control due to a stall was no longer possible. The Investigation found that the initial engine fault occurred before getting airborne and should have led to a low-speed rejected take-off. Failure to follow SOPs and deficiencies in those procedures were identified as causal.

On 4 February 2015, an ATR72-600 (B-22816) being operated by TransAsia Airways on a scheduled domestic passenger flight from Taipei Songshan to Kinmen as GE235 in day VMC crashed out of control into the Keelung River in central Taipei three minutes after take-off. Having flown close to several high buildings, near to impact, it passed low over a road bridge and one wing struck a moving taxi injuring both occupants, one seriously. The aircraft was destroyed and there were 43 occupant fatalities including all 3 flight crew and one of the two cabin crew. 14 of the remaining occupants sustained serious injuries and one sustained minor injuries. Some railings and a light pole at the edge of the bridge were also damaged.

An Investigation was carried out by the Taiwan Aviation Safety Council (ASC). Both the FDR and 2 hour CVR were recovered and data from both of them were successfully downloaded. The PCMCIA Card from the QAR was also recovered undamaged and found to contain almost equivalent data to that on the FDR. Recorded ATC data were also available.

The flight was the third of four sectors for the flight crew consisting of two return flights from Songshan to Kinmen. Take-off from runway 10 was commenced with Captain 'A' as PF, Four seconds later, the PM stated that the Automatic Take-off Power Control System (ATPCS) was not armed. The PF responded that the take-off would continue which was acknowledged by the PM. After a further seven seconds, the PM advised that the ATPCS was now indicating 'armed' and the aircraft became airborne 11 seconds after that. The AP was engaged soon afterwards in LNAV and, at 115 knots, IAS modes. TWR instructed the aircraft to change to Taipei APP as it commenced a climbing right turn passing 1000 feet in accordance with the assigned SID. Then, as it passed 1200 feet, the FDR recording indicated that the left engine was operating in an uptrim condition with its bleed valve closed which "corresponded with the beginning of an ATPCS sequence" in which the right engine had been auto feathered. The Master Warning was annunciated accompanied by an "ENG 2 FLAME OUT AT TAKE OFF" message in the Engine Warning Display.

The AP was disconnected almost immediately and the PF announced that he would "pull back engine one throttle”. The PM responded with “wait a second cross check”, but the rearward power lever movement of engine one had already been commenced, although it was then stopped at 66 degree Power Lever Angle (PLA). The aircraft continued climbing with IAS and HDG modes now set and with the selected speed of 106 knots and the selected heading initially at 131° which later changed to 092°.

The PM then called “OK Engine Flame out Check”, the PF responded with “check”, the PM stated “check uptrim yes, auto feather yes” and the PF responded with “OK”. At almost the same time, the PM called out “watch the speed” which had reduced to 101 KCAS and the PF then announced that he was going to further reduce power on engine one and did so to the 49 degree PLA position. Whilst this was being done, the PM said "OK now number two engine flameout confirmed” to which the PF responded to with another “OK" but left the left engine power lever at the 49 degree PLA position.

Thirty one seconds after the "ENG 2 FLAME OUT AT TAKE OFF" annunciation, the aircraft had reached 1,630 feet, the highest altitude recorded, and the airspeed was 102 KCAS. The IAS mode then reverted into PITCH HOLD mode for a continuous period of 20 seconds. The power setting was not sufficient to support continued climb and one second later the Stall Warning was active for one second. The PF then said “terrain ahead”, the PM replied “OK lower…” and the Observer said “you are low”. The Stall Warning was activated again for four seconds, this time with the stick shakers. The PM responded with “okay push, push back”, to which the PF stated “shut”; the PM then responded “wait a second…throttle throttle” and the engine one Power Lever was moved to the fully retarded Idle position and the engine two (left engine) Power Lever was advanced to 86 degrees. The aircraft was "now in a continuous left turn with a 10 to 20 degree angle of bank and in descent through 1,526 feet at 101 KCAS”. Engine one was then shut down.

Eleven seconds after this shutdown was complete, the PM declared a MAYDAY as the aircraft began to bank to the right. The crew attempted to engage the AP again twice but failed whilst the Observer asked "how it had become like this". Immediately after two failed attempts to engage the AP, during which the Observer asked "How has it becomes like this", the PM first stated "both sides...lost" and then immediately followed this with "no engine flameout, we lost both sides". The PF began repeating "restart the engine" and, after a further 16 seconds, engine one had been restarted and had reached 30% Nh with the aircraft descending through 400 feet. The PF said “Wow pulled back the wrong side throttle” and "from that time on, the aircraft entered an aerodynamic stall from which it did not recover". An EGPWS PULL UP Warning occurred and the left bank increased suddenly to 80° and the left wing collided with the taxi on the road bridge before continuing to bank left and enter the river inverted three minutes after becoming airborne from Songshan.

The picture sequence below shows the final moments with aircraft stalled taken by a dashcam on a vehicle which was following the taxi. 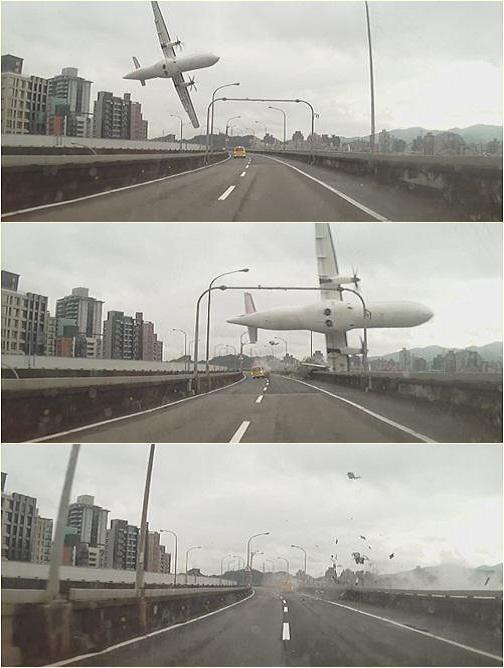 After reviewing the assembled evidence, the observations of the Investigation included the following:

The Investigation formally documented a series of 9 Findings related to Probable Causes as follows:

It further documented a series of 10 Findings Related to Risk as follows:

A total of 16 Safety Recommendations were made as a result of the Investigation as follows: