On 6 April 2016, a BAe ATP partly left the side of the runway soon after touchdown, regaining it after 155 metres before completing its landing roll. It sustained damage rendering it unfit to continue flying but this was not noticed until five further flights had been made. Investigation attributed the excursion to lack of pilot response to unexpected beta range power and the continued flying to the aircraft Captain's failure to ensure proper event recording, accurate operator notification or a post-excursion engineering inspection of the aircraft. Systemic inadequacy in safety management and culture at the operator was identified.

On 6 April 2016, a BAe ATP (SE-LLO) being operated by NextJet on a scheduled domestic passenger flight from Hemavan Tärnaby to Vilhelmina as 2N773H partly left the runway to one side in normal day visibility when reverse pitch was selected after touchdown following an ILS approach. The runway was regained and the aircraft taxied in to the gate. Resultant damage to a runway edge light was found but damage to the aircraft trailing edge flaps was not and it subsequently continued flying, during which period neither the next four flight crew pre flight external checks nor a routine engineering inspection prior to those flights detected the damage; it was only finally noticed after these flights had been completed and the aircraft immediately grounded for repairs.

The Swedish Accident Investigation Authority (SHK) was promptly notified of the occurrence by the airport but not by the aircraft operator. An Investigation was carried out into both the runway excursion and the continued operation of the aircraft when in an un-airworthy condition. Noting that the FDR and QAR recorded identical parameter data, the QAR was removed and successfully downloaded and the data relevant to the event were obtained.

It was established that a stabilised ILS approach to runway 28 at Vilhelmina (LDA 1,260 metres) had been flown. Visibility for the landing had been pre-advised as approximately 1400 metres in snow with runway friction coefficients measured as 0.43, 0.45 and 0.42 in slush to a depth of 5 mm with snow falling. The flight crew, who were familiar with the airport, used the lowest reported friction coefficient of 0.42 for their calculation of landing performance but did not make any corrections for the reported contamination of the runway. It was noted that discounting the potential effects of the reported surface contamination, the friction coefficients on their own corresponded to a braking action of 'GOOD'.

Conditions for the landing were a wind from 300° at 4 knots, a visibility of 1,400 metres in snow and temperature and dew point both 0° C. The touchdown occurred in the close vicinity of the appropriate reference speed and on the runway centre line within the Touch Down Zone (TDZ) but immediately after touchdown as the power levers were moved into the beta range to obtain reverse propeller pitch, the aircraft began to drift to the right side of the runway. Within 6 seconds and having travelled about 400 metres along the runway since touchdown, the right main gear departed the paved surface to the right and then ran on the grass, no more than 2.5 metres from and generally parallel to the runway edge, for 155 metres before the aircraft had slowed enough for it to be possible to steer it back onto the runway. It was then stopped before the end of the runway but with what margin to spare could not be established. It was found that as the right main gear departed the runway, it had hit and damaged one of the runway edge lights.

As the aircraft back-tracked during the taxi to the terminal on the north side of the runway, the Captain was able to see the wheel tracks on the grass and informed TWR that it was apparent that "they had run off the runway and also damaged a runway edge light". The edge light concerned was located close to where the right main gear departed the paved surface. On receipt of the information that an excursion had occurred, an airport vehicle was immediately despatched to inspect the scene of the excursion and the findings were duly recorded. Once the aircraft was on stand, the Captain "attempted to make contact with the company’s technician, only to find that he had left the airport" and therefore decided that the continued airworthiness of the aircraft could be confirmed by a pilot pre flight external check. This inspection did not disclose the damage which was subsequently found and so since no aircraft Technical Log entry about the excursion had been made, there was no reason why the aircraft should not continue to Stockholm Arlanda as planned and it subsequently did so. It was found that before departure, the Captain had contacted the NextJet Director of Flight Operations (DFO) by telephone to discuss his intention to continue on the next sector. He stated that this conversation "supported his decision to continue" but it appeared from the account of this conversation provided by the DFO that "he was not provided with a full account of the incident […] only told that they had been far out towards the runway edge during the landing". The DFO stated that he "therefore had not given any permission for - or felt he would have had any reason to 'approve' - the onward flight".

An annotated extract of the aerodrome chart from the AIP. [Reproduced from the Official Report]

An examination of the recorded flight data showed that when the power levers were moved into the beta range to aid deceleration during the landing roll, the resulting engine power had not been symmetrical, that on the right engine had been noticeably higher than that on the left engine. It was concluded that it was this which had "caused a yawing moment to the right which could not be corrected by the crew". The Investigation noted that the relatively narrow runway (30 metres wide) had meant that once the effect of the asymmetric power had caused the deviation to begin, FDR data showed that there had been only around 6 seconds for the crew to take corrective action before the right main gear left the runway. Corrective opposite rudder input was recorded as the deviation continued but it was clear that the effect of this had not been sufficient to compensate for the asymmetric power effect. It was in any case considered that it is "highly likely that the aircraft was subjected to aquaplaning in the initial stage of the landing roll" which would have affected the ability to achieve directional control at higher speeds.

Whilst the reason why asymmetric power occurred whilst in the beta range could not be determined - the possibility of deviations from correct engine control rigging could not be ruled out - it was not clear why the crew did not bring the power levers forward and back towards idle as soon as the unwanted yaw to the right occurred. The Investigation considered that either the crew had not noticed that the engine power was uneven or that the shortness of the runway meant that the crew believed that the braking effect of reverse propeller pitch - which was independent of the potentially slippery surface - was necessary to slow down in the distance available.

The fact that the flight crew had not taken any account of the likely effect of the slush-contaminated runway when calculating landing performance yet commented afterwards that "it was very slippery on the runway" was found to be a direct consequence of deficiencies in the applicable Standard Operating Procedures (SOPs). In particular, whilst the operator's Route Performance Manual (RPM) contained general guidance in respect of operations on slippery runways, it stated only that landing on contaminated runways "should be avoided […] whenever possible" and it did not contain "information regarding the reliability of reported friction conditions in connection with slush and temperatures around 0°C". The Investigation noted that although the RPM "had been drawn up in accordance with applicable [EASA] provisions and instructions from the AFM", it lacked any guidance for flight crew on the "the interpretation of friction coefficients when landing on runways contaminated with water or slush". The overall conclusion of the Investigation in this matter was "that there are weaknesses in the fundamental regulatory framework, the intention of which is to ensure there are adequate margins when landing". It was considered that "the regulations currently applicable result in an unreasonable amount of responsibility being placed on an aircraft commander with regard to decisions concerning whether or not a landing is to be performed on a contaminated surface" and that "a clearer regulatory framework would mean better decision-making support for crews in situations that are difficult to assess". It was additionally considered that neither the European Plan for Aviation Safety (EPAS) nor the European Action Plan for the Prevention of Runway Excursions (EAPPRE) currently include future actions which will promote an increased level of landing safety in respect of contaminated runway surfaces.

The damage eventually found to have occurred to the aircraft was to the right wing trailing edge flap and consisted of cracks in and a deformation of the flap plate. The area of damage to the underside of the plate was approximately 290 by 180 mm and there was an indentation of approximately 25 mm (see the illustration below). The upper side of the plate was found to have a corresponding 8mm bulge. The damaged flap was not repairable and had to be replaced. The Investigation was not able to examine the damaged part as it was destroyed upon removal and so although the aircraft was clearly not airworthy for the five flights conducted in a damaged condition, it was not possible to assess the level of increased risk that these flights may have entailed. 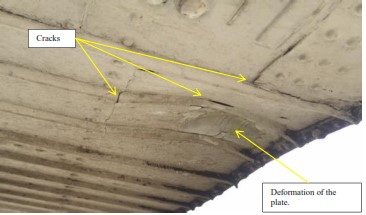 The underside of the damaged wing flap. [Reproduced from the Official Report]

Finally, the Investigation considered how the lack of an embedded safety culture at NextJet evidenced by both the runway excursion and its aftermath had been a context for what happened. As reference for this, the ICAO Safety Management Manual references to "deviations from aviation safety standards and routines" was examined, in particular noting "the operator's responsibility for the balance between production and aviation safety". It was concluded that "the operations of smaller airlines, which sometimes have limited resources, occasionally border on what would be considered a deviation" from acceptable practice. It was noted that there must be an effective 'Compliance Monitoring System' (CMS) to ensure the ongoing effectiveness of the SMS.

The Investigation concluded that the Causes of the investigated events were as follows:

Safety Action taken by NextJet as the result of the runway excursion whilst the Investigation of it was in progress were noted as having included the re-categorisation of Vilhelmina to Category 'C' (special pilot training required) and enhancements to the simulator programme in respect of slippery runway operations.

The Final Report of the Investigation was published on 5 April 2017.