On 12 December 2018, the flight crew of a Beechcraft 1900 landing at the uncontrolled airport at Trail after an into- sun offset visual approach failed to see a runway inspection vehicle coming towards them until after touchdown. Maximum reverse and braking and an increased vehicle speed to exit combined to prevent collision by 4 seconds. The Investigation found that the mandatory airport safety management system was dysfunctional with relevant driver procedures either not followed or nonexistent and noted that two other recent runway incursions had been deemed unrelated to airport operations so that no risk review was carried out.

On 12 December 2018, a Beechcraft 1900 (C-GIPC) being operated by Pacific Coastal Airlines on a scheduled domestic passenger flight from Vancouver to Trail as PCO451 had just made a daylight touchdown on the 1219 metre-long destination runway 16 when the crew saw a runway inspection vehicle coming towards them and applied maximum braking allowing the vehicle to exit four seconds before they passed the exit position.

An Investigation was carried out by the Canadian Transportation Safety Board (TSB). The aircraft was required to be fitted with a 30 minute CVR and was so equipped but since the flight crew failed to trip the recorder CB, which was an OM requirement following any event reportable to the TSB, relevant data was subsequently overwritten. No FDR was installed nor was one required to be. There was also no recording of communications on the radio frequency in use nor was this required either.

It was noted that the Captain had a total of 2,474 hours flying experience of which 1,398 hours were on type and that the First Officer had a total of 1,882 hours flying experience of which 332 hours were on type. The pickup truck which was on the runway when the aircraft touched down was being driven by an airport maintenance technician who had been employed “full time” (4 days per week) as such for just over a year prior to which he had no experience of airport operations. The part time snowplough driver had been employed at the airport for 12 years and had been one of two “airport operation specialists” for the four years leading up to the investigated event prior to which he also had no airport operations experience. Both men held valid Unrestricted Airport Vehicle Operator (U-AVOP) Permits issued by the Airport Manager and had both completed training as Aviation Radio Operators and held a corresponding certificate. The Airport Manager had been in post for 2½ years and was a part time employee who was also the designated “SMS Manager”. When appointed, it was noted that, he had “no airport experience or aviation knowledge” and that the safety regulator did not “approve or set out experience requirements for the airport manager position at Certified Airports” such as Trail.

It was noted that Trail was an uncontrolled aerodrome where a Mandatory Frequency (MF) should be established “if the traffic volume and mix of aircraft traffic at that aerodrome is such that there would be a safety benefit derived from implementing MF procedures.” The MF area at Trail was noted to be airspace within a 5 nm radius up to “4400 feet amsl or 3000 feet agl”. Only aircraft equipped with a functioning radio capable of maintaining two-way communication are permitted in an MF area and there are regulatory MF communication requirements for VFR aircraft approaching an uncontrolled aerodrome. The Investigation found that the flight crew completed the required communications during the approach and landing.

It was established that on the morning of the flight involved an airport vehicle operator had arrived at Trail Airport and found that the runway surface “was covered in thin slushy snow that had frozen overnight” and a second airport vehicle operator, who had been called in for the purpose, had arrived to assist with snow removal which began shortly afterwards with the work of a single snowplough being overseen by the driver of a pickup truck. By the time the flight from Vancouver was scheduled to depart two hours later, snow clearance was still in progress and the runway conditions, reported as “poor” prior to the commencement of clearance, had not been updated so departure was delayed. Once an updated report had been received, the flight departed Vancouver just over an hour later with an en route time of approximately an hour.

Passing 12,500 feet QNH in the descent, the flight was able to continue in VMC and when just over 20 nm from Trail, the IFR flight plan was cancelled and the flight continued under VFR. Three minutes later, the snowplough driver stopped at the runway holding position marking for Runway 16/34 (see the illustration below) and used the Mandatory Frequency (MF) to contact the flight and request its arrival time. The flight crew responded that they were about five minutes away and were advised by the snowplough driver that he intended to enter the runway in order to remove an area of slush near its intersection with the taxiway, which he then did before exiting onto the taxiway in around a minute and reporting clear to the inbound flight on the MF which was acknowledged. 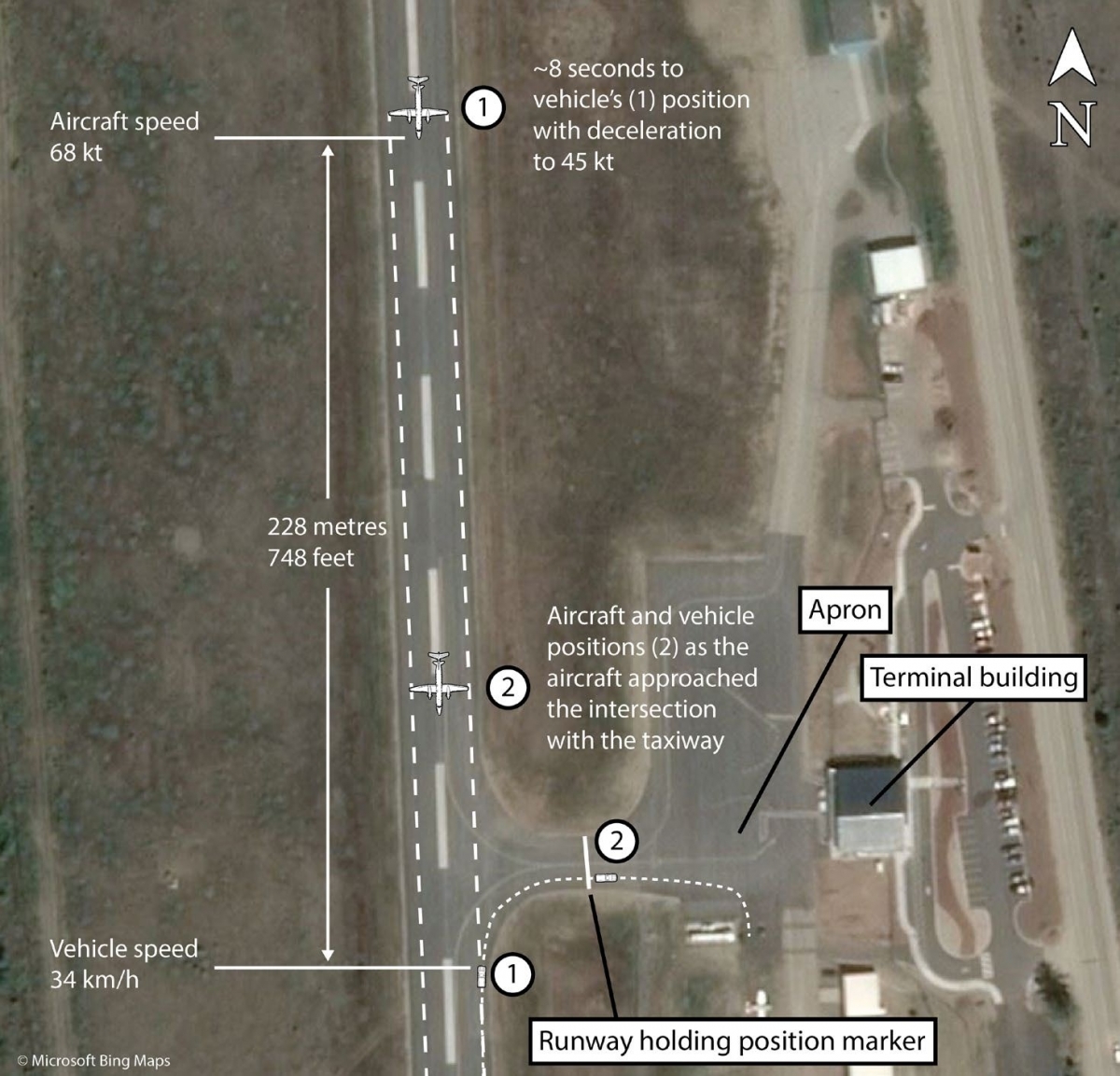 The route followed by the snow clearance vehicle convoy. [Reproduced from the Official Report]

Whilst the snowplough was on the runway in the vicinity of the intersection, the pickup truck entered the runway via the taxiway “without confirming the aircraft location or stopping at the runway holding position marking” and proceeded north. Observing this, the snowplough driver reported having made a call on the MF to inform the pickup truck driver that the aircraft was approximately three minutes away but received no reply. The inbound aircraft flight crew stated that they had not heard this transmission.

After the pickup truck driver reached the northern end of the runway, he stated that he had needed extra time at the threshold before beginning to drive south towards the runway 16 threshold “in order to inspect ridges on the runway surface and to provide an updated surface condition report” but had not broadcast his intentions.

According to the flight crew, when on 4nm final on an offset approach to runway 16 for which the runway extended centreline is only joined at 1nm from the threshold, they had made a call on the MF saying that they would be landing in 1 minute which neither driver reported hearing. Only as they were just about to touch down did the flight crew note that the snowplough was on the apron. At this time, the pickup truck was just beginning to drive south along the east side of the 1219 metre-long runway and was still doing so just over half a minute later when the aircraft touched down at a recorded 113 KCAS.

Having selected the propellers into reverse pitch to begin deceleration, the flight crew reported having “looked down the runway” and seen the pickup truck coming towards them on the 23 metre-wide runway and had immediately applied full reverse and begun maximum braking. They reported that the aircraft had begun to skid as a result of the heavy braking but that they had been able to maintain control.

On seeing the landing aircraft, the pickup truck driver reported accelerating in order to reach a taxiway and exit the runway and was just able to do so before the aircraft passed the taxiway intersection he had used 4 seconds later. The aircraft then completed its landing roll, backtracked and taxied to the apron without further event.

The Investigation found that the minimum separation between the landing aircraft and the pickup truck prior to it exiting the runway had been 228 metres and that the closing speed at the point the pickup truck was about to turn off the runway had been 63 knots - made up of the aircraft decelerating through 45 knots and the truck travelling at 18 knots.

After the pickup truck driver had parked his truck next to the apron, he reported having discovered that the volume control on his vehicle’s VHF radio had been turned down so low that transmissions made on the MF frequency would have been inaudible. The flight crew reported that their approach had been into sun and that they had both lowered their sun visors to combat solar glare from the wet runway surface.

The effectiveness of the SMS at Trail Airport, which was a regulatory requirement, was examined. It was found that although the airport’s SMS Policy Manual required that “a review of hazards is conducted […] when major changes occur at the Airport (i.e. changes to staff, equipment, air carrier frequency, aircraft type or destination)” no such review was completed prior to an increase in the number of Pacific Coastal Airlines’ flights into Trail for the 2018 winter.

It was noted that the difficulty which the flight crew had in detecting the presence of the pickup truck on the runway earlier than they did may, since the ground surrounding the runway was snow-covered, have been partially a result of the fact that although its flashing beacon and daytime running lights were on, it was painted white and, contrary to the applicable SOPs, its headlights were not on when on the runway.

It was also noted that the staff training programme for airport vehicle drivers did not cover the simultaneous presence of multiple vehicles on the manoeuvring area and that neither driver had completed all the requirements specified in the Airport Staff Training Manual.

It was found too that there had been two runway incursions at Trail in 2017 following both of which a safety investigation and risk assessment had been completed by the Airport/SMS Manager. However, a subsequent “Management Review” of 2017 was found to have “deemed both events unrelated to airport operations” so that “airport operations were not reviewed or changed” as a result. It was also noted that “the safety goals and objectives for 2018, set out in the 2017 Management Review, did not include an objective related to preventing runway incursions”.

More generally, it was observed that “the TSB is concerned that the rate of runway incursions in Canada and the associated risks of collision will remain until effective defences tailored to address identified hazards are implemented at airports and in aircraft, vehicles, and air traffic service facilities across Canada”.

Based on the evidence available, the following observations were made:

The three formally-stated Findings as to Causes and Contributing Factors were as follows:

Six formally-stated Findings as to Risk were also identified as follows:

One Other Finding was also formally identified as “the flight crew did not isolate the CVR before (relevant data were overwritten so it) was not available for review and information that could have been valuable to the Investigation was lost”.

Safety Action advised to the Investigation by the Trail Airport Operator as a result of the investigated event as noted as having included the following:

The Final Report of the Investigation was authorised for release on 5 February 2020 and it was officially released on 5 March 2020. No Safety Recommendations were made.