On 18 January 2019, two aircraft taxiing for departure at Helsinki were cleared to cross the landing runway between two landing aircraft. Landing clearance for the second was given once the crossing traffic had cleared as it passed 400 feet in expectation that the previous landing aircraft would also shortly be clear. However, the first landing aircraft was slower than expected clearing the runway and so the second was instructed to go-around but did not then do so because this instruction was lost in the radar height countdown below 50 feet and the runway was seen clear before touchdown.

On 18 January 2019, a Boeing 737-900 (TC-JYH) being operated by Turkish Airlines on an international passenger flight from Istanbul to Helsinki as THY1XE was slow to clear the landing runway at Helsinki after completing a landing in night VMC and the next landing aircraft, a Boeing 737-MAX 8 being operated by Norwegian Air International on an international passenger flight from Krakow to Helsinki as IBK351, was instructed to go around when on very short final but did not do so after the crew had confirmed that the runway was completely clear.

After a Serious Incident was notified by ATC, an Investigation was carried out by the Safety Investigation Authority of Finland (SIAF) into the circumstances which had led to the issue of the very late go around instruction and the landing which was then completed contrary to it. ATC radar and voice recordings were available and FDR and CVR data relevant to the event were provided by Norwegian Air.

The crew of the second landing aircraft filed an internal report in line with company procedures after learning about the event from ATC. Although it was not assessed to have had any bearing on the event, the TWR controller position was being operated by a trainee under the supervision of an On-the-Job-Training Instructor (OJTI) albeit, the trainee was an experienced controller undergoing validation for the Helsinki TWR position.

It was noted that separation between the two aircraft landing on the active runway 22L was approximately 4 nm, which was an equivalent to a one and a half minutes gap between them. The general traffic situation at the airport was normal for the time of the day. Once the first of these two aircraft had landed, the TWR controller cleared two aircraft which were taxiing north from the terminal area towards the active departure runway 22R - SAS 1713, a Bombardier CRJ 900 going to Stockholm and on taxiway ZD and SAS 719, an Airbus A320neo going to Copenhagen and on taxiway Y - to cross runway 22L (see the illustration below).

Once the TWR controller had verified that both departing aircraft had cleared the landing runway and that the previous landing aircraft was turning off onto exit taxiway ZJ, he cleared the second aircraft to land as it was passing approximately 400 feet. It subsequently became clear that the aircraft expected to vacate had slowed markedly during its rollout and after entering taxiway ZJ at a groundspeed of approximately 9 knots, its speed had then reduced to approximately 4-5 knots as it entered the taxiway. Having instructed this aircraft to vacate the 60 metre-wide runway and contact GND, the second landing aircraft was approaching the threshold and by the time it arrived over the threshold, the previous landing aircraft had vacated the 60 metre-wide runway and was entirely on the taxiway.

However, although the TWR controllers were monitoring the situation, the vacating aircraft’s slow speed prevented them from positively determining whether it was moving or not and having concluded that the runway was still occupied and with the next landing aircraft now between 50 feet and 30 feet agl over the threshold, the OJTI controller prompted the trainee to issue a go-around instruction to the aircraft which had previously been cleared to land. There was no response to the go-around instruction which was obscured by the fixed high volume of the automated callout system annunciating radar height at 10-foot intervals from 50 feet agl. 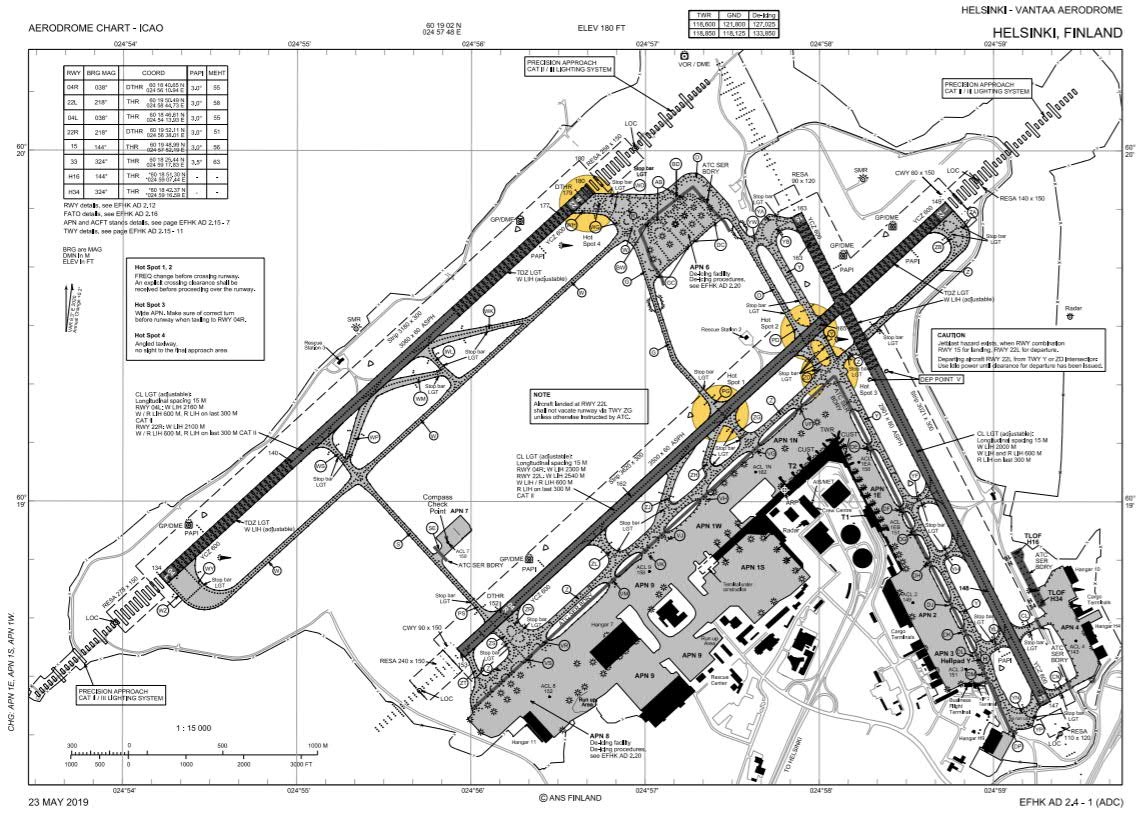 The Helsinki Aerodrome Diagram. [Reproduced from the Official Report]

On reaching the end of taxiway ZJ, the first landing aircraft turned right onto taxiway Z and was led by a ‘Follow-Me’ car to its designated parking stand. During the second aircraft’s taxi-in, the TWR controller asked the crew to establish contact on a discrete frequency and there advised them that they had been told to go around and that the event would be reported. The Captain, who had been PF for the flight involved, also subsequently called ATC on the phone and made it clear that they had not ignored the go around instruction, they had not heard it. 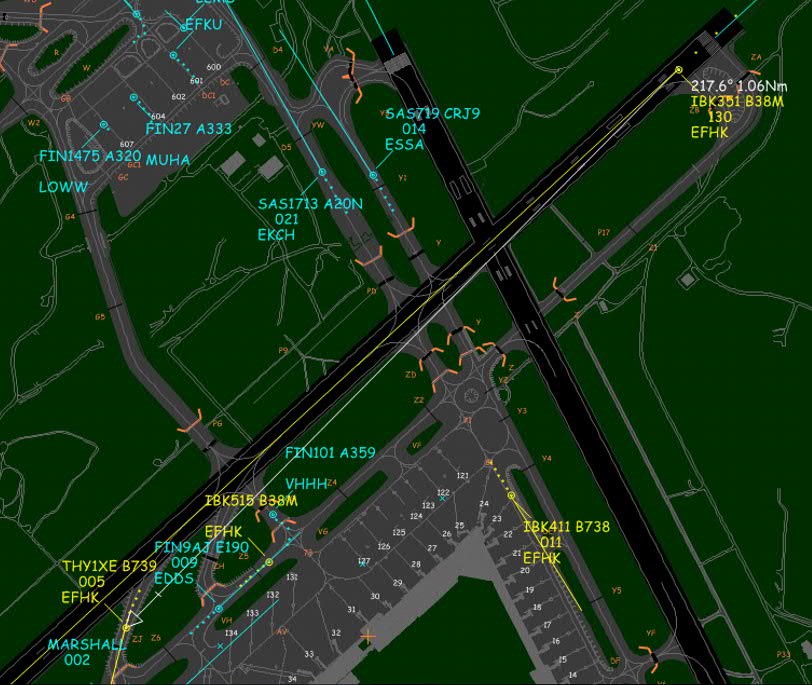 The traffic situation with the first landing aircraft just clear and the second over the runway. [Reproduced from the Official Report]

Five specific Conclusions in respect of the Investigation which “include the Causes of the investigated event which means the factors underlying it and the direct and indirect factors that had an effect on it” were documented as follows:

The Final Report was published on 19 December 2019.