On 19 June 2016, a BAe 146-300 landed long at Khark Island and overran the end of the runway at speed with the aircraft only stopping because the nose landing gear collapsed on encountering uneven ground. The Investigation attributed the accident - which caused enough structural damage for the aircraft to be declared a hull loss - entirely to the decisions and actions of the aircraft commander who failed to go around from an unstabilised approach, landed long and then did not ensure maximum deceleration was achieved. The monitoring role of the low experience First Officer was ineffective.

On 19 June 2016, a BAe 146-300 (EP-MOF) being operated by Mahan Airlines on a domestic passenger flight from Ahwaz to Khark Island as IRM 4525 landed long off a visual approach to runway 13 at destination in the early afternoon and overran the end of the runway by 54 metres. The nose gear collapsed soon after the aircraft left the paved surface causing significant structural damage to the front of the aircraft which was subsequently declared a hull loss. An emergency evacuation was performed on the orders of the Captain; none of the 89 occupants were injured but due to damage to the door separating the flight deck from the passenger cabin, the flight crew evacuated via the side windows and using the escape ropes provided for that purpose. 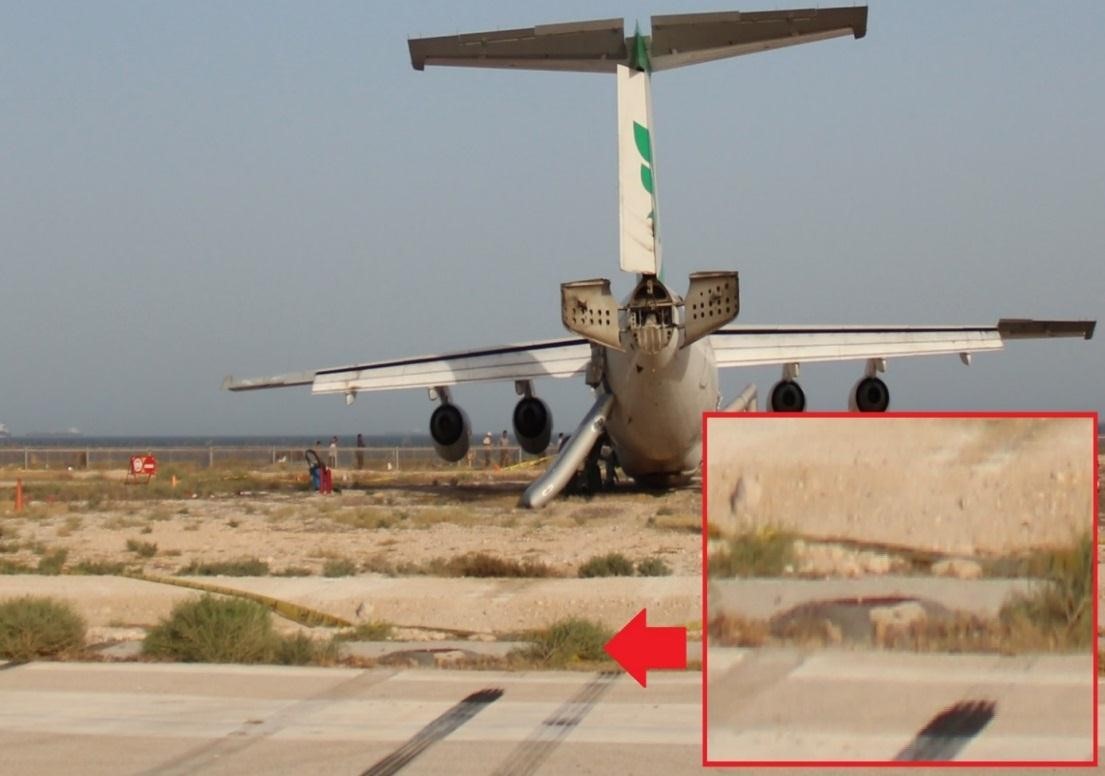 The aircraft stopped - inset is an enlargement of the point where the nose gear collapsed. [Reproduced from the Official Report]

An Investigation was carried out by the Aircraft Accident Investigation Board of the Iran Civil Aviation Organisation (CAO). The 2 hour SSCVR and the SSFDR were recovered from the aircraft and successfully downloaded.

It was noted that only Visual Approaches are permitted at Khark Island because of "some ground obstacles near the airport" but also that this was not published in the Iranian AIP. It was noted that Khark Island Airport provided only FIS using the call sign 'Khark Information' but had nevertheless transmitted "approved clear to land" to the accident aircraft whose First Officer had responded with "cleared to land".

It was established that the flight had been behind schedule and that, although the Captain had initially briefed for a downwind join followed by an approach to and landing on runway 31 because of the likely tailwind on runway 13, he had eventually decided, on receipt of the latest surface wind from the Khark Island Information Officer as being from 300° at a mean speed of 16 knots, to accept a (just within limits) tailwind approach to runway 13. The subsequent visual approach was much steeper and faster than normal as the pilot attempted to reach a normal vertical profile on final and as the aircraft passed 1,000 feet, recorded data showed that the rate of descent was almost 1,100 fpm and the airspeed was 31 knots above the applicable Vref for the 38 tonnes ELW of 119 knots. Passing 500 feet, the rate of descent was still almost 900 fpm and the airspeed was Vref plus 17 which was 7 knots above Vapp defined for the aircraft type as Vref + 10. Thereafter, the airspeed increased to Vref + 26 knots at 105 feet and had reduced only slightly as the runway threshold was crossed just below the 50 feet agl target.

Touchdown on the 2,334 metre long runway did not occur until approximately 685 metres past the threshold at a recorded speed of 121 knots and there was then a significant (7 second) delay in the deployment of the lift spoilers. Although control column position was not recorded on the FDR, it was considered that the fact that pitch attitude during the landing roll had remained negative throughout was likely to have been a result of excessive forward pressure on the column which, crucially, would have reduced the downward pressure on the main landing gear both prior to and after lift spoiler deployment. Both factors would have reduced braking effectiveness. The overrun then occurred with the aircraft speed recorded as 51 knots. It was found that there was no designated Clearway beyond the end of the runway so that there was a greater risk of gear collapse on the uneven surface - note the gulley immediately after the end of the runway in the illustration above.

The Investigation noted that the First Officer had called out "airspeed 145 knot" as the aircraft had passed 300 feet (the Captain had responded with "airbrake out") but the report did not mention any other calls alerting the Captain to excessive speed. The prevailing Standard Operating Procedures (SOPs) documented in both the FCOM and the Operations Manual included a requirement to go around if the speed is more than Vref +14 at the threshold whereas it was in excess of Vref + 20.

Examination of wind velocity measurement at Khark Island and the diurnal pattern of summer winds there indicated that although the 15 knot tailwind component limit for landing had not been exceeded relative to the wind readings passed to the aircraft, it was quite likely that the actual tailwind on final approach to and touchdown on runway 31 had been much closer to the limit than the Captain probably anticipated.

The correct function of all the main systems involved in deceleration was confirmed but signs that the anti-skid on the right hand main gear had failed were found in the marks made by the right main gear tyres on the surface of the runway near to its end and bench testing of the corresponding control box confirmed this.

In summary, analysis of the evidence showed that:

The Conclusion of the Investigation was that the Main Cause of the accident was a series of errors by the aircraft commander. These comprised his poor judgement in continuing with a landing on the short runway 13 with a tailwind instead of going around after flying an unstabilised approach, the obviously weak CRM on the flight deck and his incorrect calculation of landing speed without taking account of the tailwind component.

Five Safety Recommendations were made as follows:

The Final Report of the Investigation was issued on 20 April 2017.