On 7 September 2006, a DHL Boeing 727-200 overran the runway at Lagos by 400 metres after the First Officer was permitted to attempt a landing in challenging weather conditions on a wet runway off an unstable ILS approach. Following a long and fast touchdown at maximum landing weight, a go around was then called after prior selection of thrust reversers but was not actioned and a 400 metre overrun onto soft wet ground followed. The accident was attributed to poor tactical decision making by the aircraft commander.

On 7 September 2006, a Boeing 727-200 being operated by DHL on a scheduled cargo flight from Accra to Lagos landed long at destination on 2745 metre long runway 18L off a day Instrument Landing System (ILS) approach in reduced but not low ground visibility in rain. Deceleration was poor and the aircraft overran the end of the runway at speed onto flat but soft ground before eventually coming to a stop. There was some damage to both aircraft and ground installations but no significant impact occurred.

An Investigation was carried out by the Nigerian AIB. The Flight Data Recorder (FDR) and Cockpit Voice Recorder (CVR) were recovered and the data from both was used to support the Investigation after download and analysis performed by the National Transportation Safety Board (USA) (NTSB). It was noted that the West African operations of DHL were being run from South Africa and the accident flight crew were expatriate Europeans working via an agency. It was established that the First Officer had been acting as PF and that the aircraft was loaded with cargo and the ELW was equivalent to the MLW of 48770 kg.

It was found that the aircraft had overrun for a distance of 400 metres onto flat but soft ground and this had resulted in damage to the landing gear and left wing slats and damage to the runway 18L localiser antennae and runway end lights.

The weather in the Lagos area at the time of the approach was thundery with squall conditions in rain during which the surface wind had settled in a generally east or south east direction. Twelve minutes prior to the accident, the surface wind had been recorded as 090°/23knots gusting to 45 knots with a visibility of 600 metres, sky obscured and a TEMPO of Thunderstorm. Five minutes prior to the accident, an updated weather report was otherwise unchanged except for a surface wind of 070°/22knots gusting to 30knots in heavy rain. The Investigation considered that in potentially difficult conditions, it was inappropriate for the First Officer to have remained as PF.

CVR data showed that the approach was not conducted with prescribed use of checklists or with adequate Crew Resource Management. The required visual reference for landing was reported to have been acquired at approximately 430 feet agl but FDR data showed that neither the flight path nor airspeed had been stabilised below 1000ft. The Reference Speed (Vref) for the prevailing landing weight and the 30 flap setting used was 137 KIAS, so that Vapp fully configured should have been less than 150 KIAS. Instead, it had increased to a maximum of 186 KCAS at approximately 45 feet agl before a touch down at approximately 167KCAS.

Touchdown was estimated to have occurred approximately 1430 metres from the start of the runway - about half way along it - and been followed immediately by thrust reverser deployment. After 17 seconds of deceleration, the aircraft commander called for a go around and stowed the thrust reversers. However, the PF had responded to the call by retarding the thrust levers to idle and pushing the control column forward so the thrust reversers were re-deployed and braking applied.

It was concluded by the Investigation that: 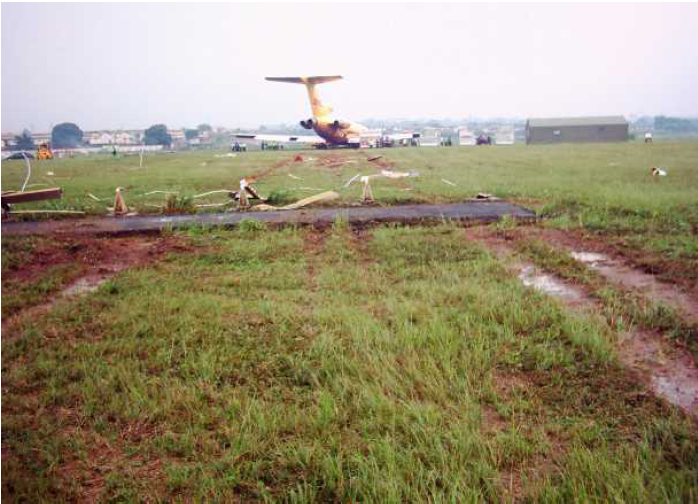 It was also concluded that two Contributory Factors had been that:

Two Safety Recommendations were made as a result of the Investigation:

Safety Action by DHL in response to these recommendations included revising its crew training to include enhanced emphasis on CRM including decision making in adverse weather conditions and, since large category aircraft were no longer used by the operating unit involved, an undertaking that if they were used in the future, load masters would travel with the aircraft.