On 28 April 1988, a Boeing 737-200, operated by Aloha Airlines experienced an explosive depressurisation and structural failure at FL 240. Approximately 5.5 metres (or 18 feet) of cabin covering and structure was detached from the aircraft during flight. As result of the depressurisation, a member of the cabin crew was fatally injured. The flight crew performed an emergency descent, landing at Kahului Airport on the Island of Maui, Hawaii.

On 28 April 1988, a Boeing 737-200, being operated by Aloha Airlines experienced sudden structural failure of the fuselage and a consequent explosive depressurisation whilst en route at FL240. Approximately 5.5 metres (or 18 feet) of cabin skin and structure was lost from the aircraft an one of the cabin crew was fatally injured. The flight crew carried out an emergency descent and made a landing at Kahului Airport on the Island of Maui, Hawaii.

This is an extract from the official accident Report AAR/89/03 by National Transportation Safety Board (NTSB):

As the airplane leveled at 24,000 feet, both pilots heard a loud “clap” or “whooshing” sound followed by a wind noise behind them. The first officer […] stated that debris, including pieces of grey insulation, was floating in the cockpit. The captain observed that the cockpit entry door was missing and that “there was blue sky where the first class ceiling had been.” [Figure 1] The captain immediately took over the controls of the airplane. He described the airplane attitude as rolling slightly left and right and that the flight controls felt “loose”.

Figure 1. Illustration of B737-200 part of fuselage that was separated during flight. Source: FAA Lessons Learned from Transport Airplane Accidents (http://lessonslearned.faa.gov/)

Because of the decompression, both pilots […] donned their oxygen masks. The captain began an emergency descent. […] Because of ambient noise, the pilots initially used hand signals to communicate. The first officer stated that she observed rate of descent of 4,100 feet per minute at some point during the emergency descent. The captain stated that he actuated the passenger oxygen switch. The passenger oxygen manual tee handle was not actuated.

The first officer said she turned the transponder to emergency code 7700 and attempted to notify Honolulu Air Route Traffic Control Center (ARTCC) that the flight was diverting to Maui. Because of the cockpit noise level, she could not hear any radio transmissions, and she was not sure if the Honolulu ARTCC heard the communication.

The controller observed the emergency transponder indication and tried to make contact with the aircraft several times without success. After the aircraft descended through 14,000 feet, the first officer contacted Maui Tower, declared an emergency situation, and stated the need for emergency equipment.

During the descent, the No. 1 engine failed and the captain attempted to restart it, without success. The captain was able to make a normal touchdown and landing rollout. He used the No. 2 engine thrust reverser and main landing gear brakes to stop the aircraft. The aircraft was evacuated on the runway.

To access the video showing the accident B737 on the runway, click here. (The video is courtesy of FAA Lessons Learned from Transport Airplane Accidents)

After the accident, a passenger stated that as she was boarding the airplane […] she observed a longitudinal fuselage crack. The crack was in the upper row of rivets along the S10L [See Figure 2] lap joint, about halfway between the cabin door and the edge of the jet bridge hood. She made no mention of the observation to the airplane ground personnel or flightcrew. 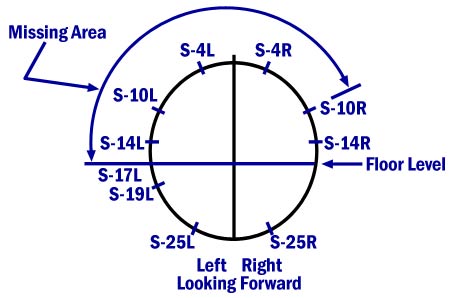 Figure 2. Front view of the fuselage, showing the sections of the fuselage and the missing area. Source: FAA Lessons Learned from Transport Airplane Accidents

According to the official accident Report, two inspectors working on separate shifts conducted inspection as required by Boeing service bulletin (SB) and related airworthiness directives (AD) after work that has been done on the aircraft fuselage skin prior the accident. An inadequate maintenance program was found to be the reason for the fuselage section separation during flight. The maintenance program failed to detect the presence of significant disbanding, corrosion, and fatigue damage. The process that was used to bond the overlapping fuselage skins together was poorly performed, and led to early disbonding.

The disbonding in turn resulted in what is known as a "knife-edge effect". This effect created a poor fatigue detail in the skin and many adjacent fastener holes started to crack.

This form of cracking is known as multiple site damage, which leads to widespread fatigue damage (WFD) in its advanced stage. By definition, WFD is a condition in which the airplane is no longer able to carry the required residual strength loads.

In the Operational Consideration section of the Report it is stated that the flightcrew actions were consistent with simulator training situations which minimise the exposure to physiological effects. The Report focuses on following three operation areas:

The National Transportation Safety Board (NTSB) determined the following Probable Cause:

[…] the probable cause of this accident was the failure of the Aloha Airlines maintenance program to detect the presence of significant disbonding and fatigue damage which ultimately led to the failure of the lap joint at S-10L and the separation of the fuselage upper lobe.

The following contributing factors to the accident are identified in the Report: