On 17 September 2017, a Boeing 737-300 requested and was approved for a visual approach to Aqaba which involved a significant tailwind component and, after approaching at excessive speed, it touched down late and overran the 3000 metre runway onto sandy ground. The Investigation found that despite EGPWS Alerts relating to both the high rate of descent and late configuration, the Captain had instructed the First Officer to continue what was clearly an unstabilised approach and when touchdown had still not occurred with around 1000 metres of runway left, the Captain took over but was unable to prevent an overrun.

On 17 September 2017, a Boeing 737-300 (JY-SOA) being operated by Solitaire Air on behalf of Royal Wings on an international charter flight from Amman to Dubai World Central via Aqaba as RWY 6888 departed the end of the Aqaba runway after a fast and late touchdown following an unstable approach in day VMC. None of the occupants were injured but the overrun led to serious left engine impact damage, right engine sand/dust ingestion, damage to the right main landing gear, superficial damage to the lower fuselage and minor damage to the passenger cabin trim. After recovery, the aircraft was withdrawn from service for repairs. Left engine impact also led to some of the runway 01 approach lights being damaged. 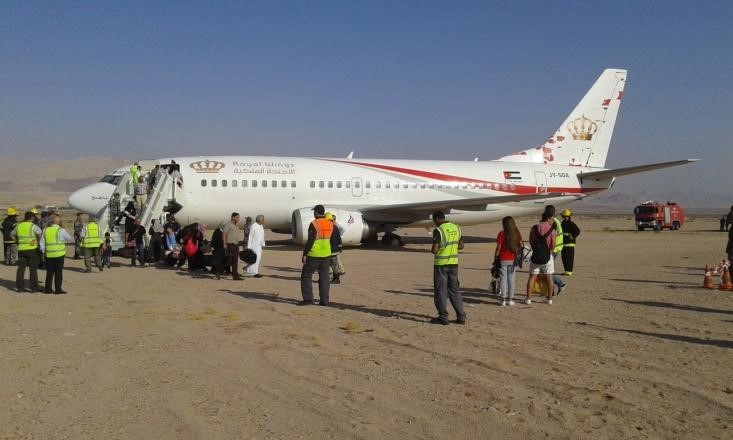 The aircraft after its 270 metre overrun at Aqaba. [Reproduced from the Official Report]

An Investigation was carried out by the Jordan Civil Aviation Regulatory Commission (CARC). Data from the DFDR and CVR were downloaded and used to inform the Investigation. It was noted that the 43 year-old Captain had a total of 7,102 flying hours, all but 102 hours on type. He had joined the airline on 1 May 2017 and had been appointed as the nominated Flight Operations Post Holder for the airline later the same month. The 29 year-old First Officer had a total of 1,662 hours, all but 213 hours on type having joined the Company three months prior to the accident in his first appointment as a professional pilot.

It was established that after a delayed departure from Amman on a two sector flight which was scheduled as an 11:30 hours flight duty period (FDP) with an applicable maximum FDP of 12 hours, the Captain was keen to make up time. En-route to Aqaba on what was going to be an approximately 35 minute flight, the Captain, who was acting as PM, contacted Aqaba ATC to request a straight in approach to runway 19 and the request was noted. Whilst awaiting a decision, the Captain briefly took over as PF so that the First Officer could set up for the anticipated 19 approach, which would be conducted using VNAV as the 19 ILS was out of service. When ATC subsequently called the flight to ask if they would be able to maintain high speed for a runway 19 landing, the Captain, now PM again, responded in the affirmative and this was approved. The crew were aware throughout that the crosswind component for a landing on runway 19 based on the received METAR was 10/12 knots and that this potentially exceeded the 10 knot AFM limitation for landing. The Captain explicitly accepted this when reminded of it by the Aqaba APP controller.

The visual approach was initially flown with the AP engaged and LVL CHG and LNAV modes selected. Engine thrust remained at Idle throughout the approach. As the aircraft descended through 2,500 feet agl approximately 1½ minutes from touchdown, it was descending at around 3,000 fpm at around 260 KCAS. Landing clearance was given at around 1500 feet agl with a spot wind of 010° at 12 knots. Half a minute later, at 1,215 feet agl, the AP and A/T were recorded as having disconnected and a few seconds later, at approximately 900 feet agl, the first EGPWS ‘SINK RATE’ Alert was annunciated. At around 850 feet agl, the VNAV ‘LVL CHG’ mode began to transition to ‘ALT ACQ’ and at 650 feet, the Flap 1 was selected. Passing 500 feet agl, with the computed airspeed 218 KCAS and the rate of descent now reduced to 1,200 fpm, Flap 2 was selected and further EGPWS ‘SINK RATE’ and ‘TOO LOW TERRAIN’ Alerts followed, the latter due to the flaps not yet being at a landing setting. At 220 feet agl, Flap 5 was selected and at approximately 135 feet agl, more EGPWS ‘SINK RATE’ and ‘TOO LOW TERRAIN’ Alerts occurred with the latter being repeated at 90 feet agl as Flap 30 was selected with the speed still at 200 KCAS and repeated again at about 60 feet agl because the flaps were still in transit to 30. On reaching 25 feet agl, the rate of descent reduced to zero and remained there with pitch attitude also zero as the aircraft floated above the runway and the excess speed bled off. Flap 30 was reached 4 seconds later.

With the aircraft still floating in an almost level attitude and the First Officer unable to put it on the runway, the Captain was recorded as calling “my control” which was immediately acknowledged and touchdown eventually occurred at 159 KCAS with just over 800 metres of the 3,000 metre-long runway remaining. Flap 40 was selected 3 seconds after touchdown along with reverse thrust, ground spoilers and maximum braking which all began to slow the aircraft down. However, it still left the end of the paved surface 14 seconds after touchdown at 50 KCAS and, after deviating slightly to the right to try and avoid further impact with the runway 01 approach lighting, finally came to a stop after further 14 seconds some 270 metres beyond the end of the runway and 60 metres to the right of its extended centreline. The thrust reversers were not stowed until the recorded speed reached 25 knots over the sandy surface. Passengers and crew were subsequently disembarked using steps and taken to the terminal.

The available CVR data indicated that the crew did not conduct the descent, approach or landing checks and showed that after each of the first three EGPWS ‘SINK RATE’ Alerts had occurred, the Captain had followed it with the successive responses “no problem”, “leave it, leave you fly” and “continue”. Although no Vref appeared to have been calculated, the aircraft ELW of 49 tonnes (the MLW was 51.7 tonnes) would imply a Vref of 135 KIAS which would have meant the eventual touchdown was made at Vref + 25.

The Investigation found that the Captain had not received all the training specified in the company Air Operations Manual after missing a ground school CRM course because he was required to fly. It was found that his attendance had nevertheless been falsely signed off by the former Accountable Manager as CRM Instructor. After the event under investigation, CARC Inspectors were reported to have found that implementation of the mandated Company SMS was minimal and “behind the required position on the implementation phased approach plan”. It was particularly noted that whilst the Company’s aircraft were fitted with QARs, “these recorders were not utilised as a source of reliable information that enabled the Solitaire Air SMS to identify operational risks such as unstabilised approaches”.

Since the Investigation was easily able to determine that the identified “Active Failures” had occurred within a context of “Latent Failures”, a detailed analysis was undertaken using the HFACS system and this identified related contributory factors in both categories. In respect of the way the Company was being run generally, it was concluded that there was considerable evidence of a complete lack of a meaningful safety culture at Solitaire Air and there had been a systemic failure of its management to correct known problems.

The formally-stated Cause of the excursion was “flight crew failure to discontinue the unstabilised approach and their persistence in continuing with the landing despite a number of EGPWS alerts”.

Twelve Safety Recommendations were made as follows:

The Final Report of the Investigation was completed on 3 December 2018 and subsequently released.