On 4 August 2014, a Boeing 737-300 making a day visual approach at Fort McMurray after receiving an ILS/DME clearance lined up on a recently-constructed parallel taxiway and its crew were only alerted to their error shortly before touchdown by the crew of a DHC8-400 which was taxiing along the same taxiway in the opposite direction. This resulted in a go around being commenced from 46 feet agl. The Investigation noted that both pilots had been looking out during the final stages of the approach and had ignored important SOPs including that for a mandatory go around from an unstable approach.

On 4 August 2014, a Boeing 737-300 (C-GICN) being operated by Canadian North on a passenger flight from Winnipeg to Fort McMurray as MPE9131 made a visual approach to a taxiway parallel to the main runway at destination after accepting an ILS approach and began a very low go around only after being prompted to do so by the crew of a Bombardier DHC8-400 being operated as Air Canada Jazz JZA391 which was taxiing in the opposite direction on the same taxiway. The recorded CPA was 230 feet vertically and 46 feet laterally.

An Investigation was carried out by the Canadian TSB. It was, however noted that "the occurrence was not accurately and promptly reported to the TSB" and that "several days elapsed before the TSB acquired sufficient data to fully understand the severity of the occurrence." Whilst the eventual download of FDR data was successful, the relevant CVR data had been overwritten making it impossible to review crew interaction during final approach. It was noted that the Captain, who was the PF for the approach, had approximately 10,000 hours total flying time including 500 hours on type and that the First Officer had approximately 3800 hours total flying time including about 600 hours on type. Both pilots were familiar with Fort McMurray and had flown there since the opening of a second (southern) parallel taxiway to provide access to the new passenger terminal some four months earlier.

It was found that, based on the report of VMC and light winds on the ATIS prior to descent, the crew had briefed for a visual approach to runway 25 with the approach aids set for the ILS. They had initially accepted radar vectors and speed control but had not checked the new ATIS notified as current which gave a visibility of 2.5 miles in haze (the latter being attributable to forest fires in the destination CTZ). The AP and A/T remained engaged as the aircraft captured the ILS LLZ still above the Instrument Landing System (ILS) GS and as the FAF was approached, the aircraft began to level at 3000 feet Altimeter Pressure Settings (equivalent to about 1800 feet aal) as a result of the crew having left 3000 feet in the selected altitude window with the altitude acquire mode armed. The A/T increased thrust to maintain speed and soon afterwards the "runway environment" was visually acquired and the Control Wheel Steering (CWS) facility used to manoeuvre the aircraft to the left to line up on what was thought to be runway 25 (but was actually the recently opened southern parallel taxiway 'J') and to increase the rate of descent.

With the aircraft at 690 feet agl and close to the applicable Reference Speed (Vref), it was cleared to land whilst descending at 1600 fpm and still 1.7 dots above the ILS GS. Ten seconds later, passing 400 feet agl and descending at about 1200 fpm, the AP and A/T were disconnected. After a further 6 seconds, with the aircraft still aligned with taxiway 'J', the EGPWS annunciated a Mode 5 'Glideslope' Alert as the aircraft descended below the glideslope. The crew asked ATC to "confirm that the runway was clear at this time" and the response was affirmative. A few seconds after this, the crew of a departing Air Canada Express Bombardier DHC 8-400 taxiing on taxiway 'J' in the opposite direction in accordance with instructions issued by the GND Controller transmitted on the TWR frequency that the approaching 737 was lined up with the taxiway. The 737 was at 85 feet agl and when the prompt led the crew to realise their error, a go around was initiated from 46 feet agl. Two seconds later, the 737 passed abeam the runway threshold with just over 850 metres to run to the position of the opposite direction DHC8. The 737 overflew the DHC8 with a 230 feet vertical separation.

The final stages of the approach are shown on the two flight path profiles below: 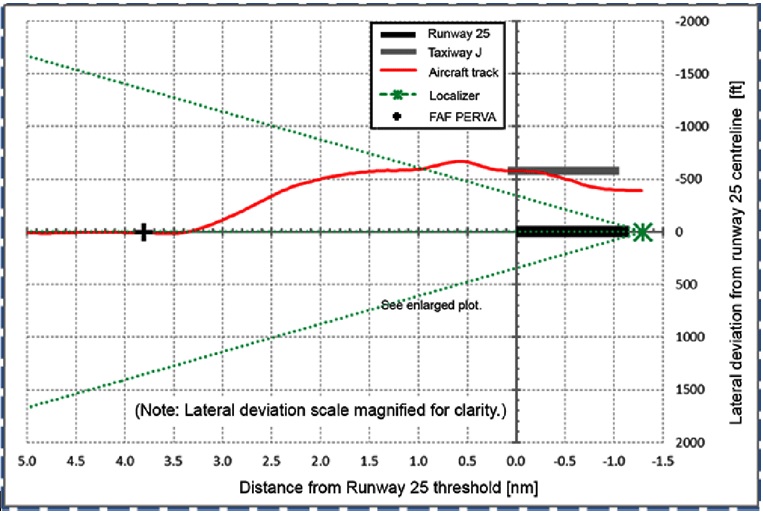 The lateral approach profile (reproduced from the Official Report) 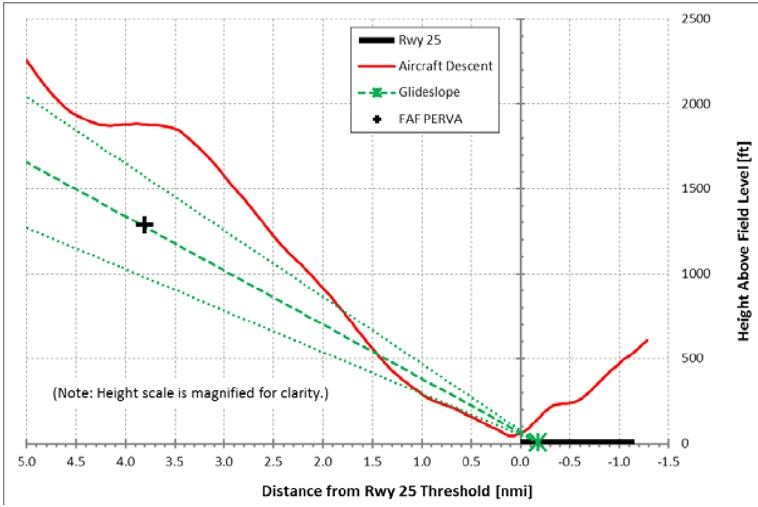 The vertical approach profile (reproduced from the Official Report)

It was noted that at the time of the occurrence, actual forward visibility would have been variable because of the prevailing haze and affected by the into-low-sun (21.4ºelevation) direction of the approach to runway 25 already commented on by a previously landed aircraft. This would have been less than the 737 pilots were anticipating and "such that a visual approach was not appropriate as per the Canadian North Standard Operating Procedures (SOPs)" - although not to an extent that earlier recognition of the line up error should have been unduly difficult. Nevertheless, on the available evidence, the actual weather conditions had not been VMC. In addition, it was observed that "an unstable approach was continued" and that the crew "did not adhere to standard procedures, which required the monitoring of all available cues during the approach and landing". This was attributed to the fact that both pilots had been looking out the window during the late stages of the approach whereas monitoring by the PM would have been expected to focus on looking inside.

It was also noted that the TWR controller had estimated the visibility as higher than that being reported by the AWOS based on their observation of a feature not depicted on the observers visibility chart. As a result, although TWR SOP required that the variable intensity approach lighting 2 should be on at level 4 intensity whenever daylight visibility was less than 4 miles, it had not been - although the PAPIs had been on. It was concluded that this had contributed to the failure to recognise their error until prompted by the DHC8 crew.

The formally stated Findings of the Investigation were as follows:

Causes and Contributing Factors A visual approach was conducted in weather conditions below visual flight rules limits, which resulted in the flight crew experiencing visual illusions and inadvertently identifying Taxiway J as Runway 25.

Safety Action taken as a result of the Investigation was noted to have included the following:

The Final Report of the Investigation was authorised for release on 23 September 2015 and officially released on 4 November 2015. No Safety Recommendations were made.