On 15 December 2015, a Boeing 737-300 crew inadvertently taxied their aircraft off the side of the taxiway into a ditch whilst en route to the gate after landing at Nashville in normal night visibility. Substantial damage was caused to the aircraft after collapse of the nose landing gear and some passengers sustained minor injuries during a subsequent cabin crew-initiated evacuation. The Investigation found that taxiing had continued when it became difficult to see the taxiway ahead in the presence of apron lighting glare after all centreline and edge lighting in that area had been inadvertently switched off by ATC.

On 15 December 2015, a Boeing 737-300 (N649SW) being operated by Southwest Airlines on a scheduled domestic passenger flight from Houston Hobby to Nashville as SWA31 left the intended taxi route onto adjacent grass during its taxi in at destination in normal ground visibility at night. The nose landing gear collapsed with consequent structural damage and there was additional minor damage to other parts of the aircraft. Nine of the 138 occupants sustained minor injuries during the subsequent evacuation. 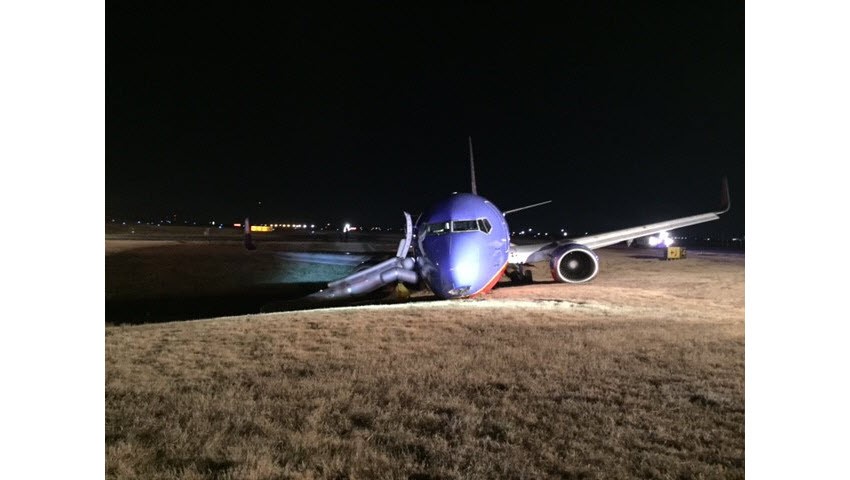 It was established that after landing normally on runway 20R and exiting it onto taxiway B2 with the Captain as PF, ATC had instructed the aircraft to taxi to its gate via taxiways B, T3, and T4 (see the illustration below). Most of the taxi in was completed uneventfully with the landing lights as well as the taxi lights being used to assist the taxi along taxiways B and T3 until the aircraft crossed runway 13/31 after which only the taxi lights remained on. The flight crew stated that as they looked for the left turn from taxiway T3 to taxiway T4, "they had difficulty locating taxiway T4 as it appeared dark and there was glare from the terminal lights ahead". The aircraft was briefly turned left onto a heading of about 065° (taxiway T4 was actually oriented at about 045°) and the crew searched for the turn to the ramp. The aircraft was then turned back to the right onto a heading of 090°, which was consistent with the heading towards their assigned gate C20 but premature and "three seconds later the airplane exited the taxiway into a grassy area with a large drainage ditch, east of the intersection of taxiways T4 and J". The nose landing gear collapsed and the aircraft stopped "angled to the right, on the left nacelle, right wing tip and nose". 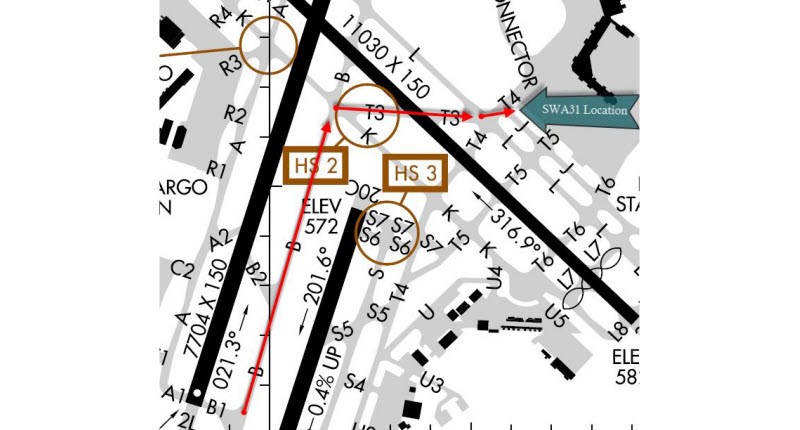 An extract from the aerodrome taxi chart annotated with the route taken and the position of the eventual excursion onto the grass. [Reproduced from the Official Report]

Soon after the aircraft stopped, the CVR recording indicated that an audible alert began sounding in the flight deck "which the flight crew indicated they could not silence" - this was subsequently identified as having been the gear unsafe alert. The Captain advised ATC that "we've cut the corner here and are off in the grass" and asked for ARFF equipment.

The Cabin Crew had experienced "a large jolt and loud bang" as the aircraft stopped and reported that all the cabin lights had gone out for "some time" before the emergency lights came on. They stated that passengers had "started getting out of their seats and were moving around the cabin" and that not knowing what was going on, two of the three cabin crew had "started using their emergency commands - heads down, stay down - to control passenger movement". After being unable to contact the flight crew on the interphone (which had lost electrical power), the front-of-aircraft cabin crew decided to initiate an emergency evacuation using door 1R only. The rear-stationed cabin crew member then "heard evacuation commands coming from the forward cabin and started yelling evacuation commands in the aft cabin". She had then switched on the emergency lights using the switch on the aft crew panel and opened first the L2 and then the R2 door. Once all passengers had evacuated, the cabin crew team checked the cabin and then evacuated themselves and ensured that the passengers were a safe distance from the aircraft.

The flight crew reported that "about a minute after the aircraft had stopped", they "noticed that the slides were deploying and passengers were evacuating". The Captain had made a PA saying "okay don't evacuate flight attendants, do not evacuate" to which the First Officer responded "oh they are already going".

It was noted that aerodrome lighting at Nashville included taxiway edge and centreline lights with all lighting controlled from two touchscreen panels located near the TWR and GND positions. The ATC Tower Standard Operating Procedures (SOPs) "did not specify who had overall responsibility for the operation of the airfield lighting" which were owned by the Airport Authority although the lighting was operated in accordance with standard FAA requirements and a letter of agreement between the TWR and the Airport Authority. ATC records indicated that "about 30 minutes prior to the accident, the taxiway lights for taxiway J & Apron 2 had been switched off". This action had "resulted in shutting off the lights for taxiways L and J, taxiways T4 and T5 to the northeast of L, the lights along the edge of the ramp parallel to J and the connector and circular area between Concourses B and C".

TWR personnel stated to the Investigation that "as a result of past complaints regarding the brightness of the green taxiway centreline lights on taxiways H, J, L, and T6" controllers routinely turned off the centreline lighting. It was found that prior to the accident, the controller in charge (CIC) had "inadvertently" turned off the taxiway J & Apron 2 lighting whilst intending to routinely switch off the centreline lights. Airport Operations staff notified the CIC that the lights were off and "he turned them back on approximately 25 minutes after the accident had occurred".

The Investigation determined that the Probable Cause of the accident was "the flight crew's early turn towards the assigned gate because taxiway lighting had been inadvertently turned off by the controller-in-charge which resulted in the airplane leaving the paved surface”.

A Contributory Factor to the accident was determined as "the operation of the screen-saver function on the lighting control panel that prevented the tower controllers from having an immediate visual reference to the status of the airfield lighting".

In regards to Safety Action, it was noted that after the accident, Nashville TWR ATC had "modified their standard operating procedure regarding responsibility for taxiway lighting and eliminated the lighting panel screensaver function".

The Final Report was adopted by the NTSB on 23 January 2017. No Safety Recommendations were made.