On 3 January 3 2004, a Boeing 737-300 being operated by Flash Airlines on a passenger charter flight from Sharm el-Sheikh Egypt to Cairo for a refuelling stop en route to Paris CDG crashed into the sea 2½ minutes after a night take off into VMC and was destroyed and all 148 occupants killed. The Investigation was unable to establish a Probable Cause but found evidence of AP status confusion and the possibility of distraction leading to insufficient attention being paid to flight path control.

On 3 January 2004, a Boeing 737-300 being operated by Flash Airlines on a passenger charter flight from Sharm el-Sheikh Egypt to Cairo for a refuelling stop en route to Paris CDG crashed into the sea 2½ minutes after a night take off into VMC and was destroyed and all 148 occupants killed.

An Investigation was carried out by the Egyptian Ministry of Civil Aviation (MCA). FDR and CVR data was successfully downloaded from the recovered recorders. It was noted that the prevailing weather conditions were benign and that both pilots were operating their first jet transport type, the Captain having accumulated less than 500 hours on type and the First Officer less than 250 hours on type. The Captain had previously had a long military flying career, acquiring most of his flying hours on the C130. The First Officer was in his first post as an airline pilot.

After departure from runway 22R, the aircraft was found to have been cleared for a climbing left turn to intercept the 306° radial from the Sharm el-Sheikh VOR to which allows departing flights to gain sufficient altitude before proceeding over higher terrain located along the flight path to Cairo. As shown in the diagram below, this left turn was achieved, but as the aircraft passed 5000 feet, a progressive right bank developed which was not corrected until after a steep descent at increasing airspeed had begun by which time it had exceeded 110°. Almost all the flight was conducted without the AP engaged and it was not clear whether both pilot had the same awareness of AP status during the flight. A very late attempt at recovery was evident but by then a high speed impact was inevitable. 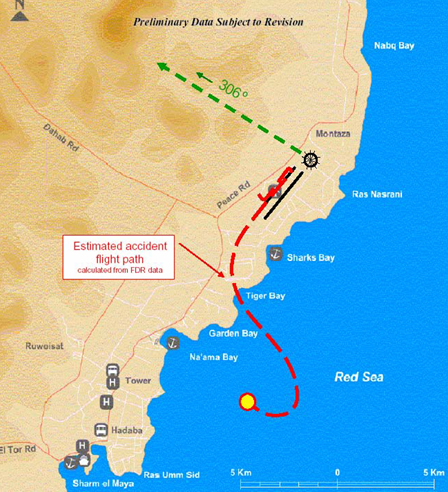 Despite considerable efforts, this Investigation was not able to determine a Probable Cause from the evidence available and the analysis thereon.

The formal Conclusion of the Investigation was as follows:

"No conclusive evidence could be found from the findings gathered through this investigation to determine a probable cause. However, based on the work done, it could be concluded that any combination of these findings could have caused or contributed to the accident. Although the crew at the last stage of this accident attempted to correctly recover, the gravity of the upset condition with regards to attitude, altitude and speed made this attempt insufficient to achieve a successful recovery."

Nine Safety Recommendations were made as a result of the Investigation:

The Final Report was published in three parts:

“The only scenario identified by the investigative team that explained the accident sequence of events and was supported by the available evidence was a scenario indicating that the Captain experienced spatial disorientation, which resulted in his making inadvertent actions that caused the accident. The remaining scenarios and possible causes were not consistent with the evidence and did not explain the sequence of events identified by the investigative team.”

To which the response of the MCA, as the body with responsibility for the conduct and findings of the Investigation was that:

“With regard to the statement that there was supporting evidence that the captain experienced spatial disorientation is inaccurate to say the least. The investigation team studied this scenario extensively, numerous conflicting evidences appeared leading to the MCA adopting the position that no conclusive evidence could be found to explain this accident.”