On 13 September 2016, a Boeing 737-300 made an unstabilised approach to Wamena and shortly after an EGPWS ‘PULL UP’ warning due to the high rate of descent, a very hard landing resulted in collapse of the main landing gear, loss of directional control and a lateral runway excursion. The Investigation found that the approach had been carried out with both the cloudbase and visibility below the operator-specified minima and noted that the Captain had ignored a delayed go around suggestion from the First Officer because he was confident he could land safely as the two aircraft ahead had done.

On 13 September 2016, a Boeing 737-300F (PK-YSY) being operated by Trigana Air on a scheduled domestic cargo flight from Sentani to Wamena as IL7321 made an unstabilised daylight approach to runway 15 at destination, continuing below the approach minima and ignoring an EGPWS ‘PULL UP’ warning triggered by a high rate of descent just before a very hard landing which resulted in detachment of the main landing gear, loss of directional control and the aircraft departing the side of the runway. All three occupants were uninjured and exited the aircraft via the main cargo door using the escape rope provided but the aircraft sustained substantial damage. 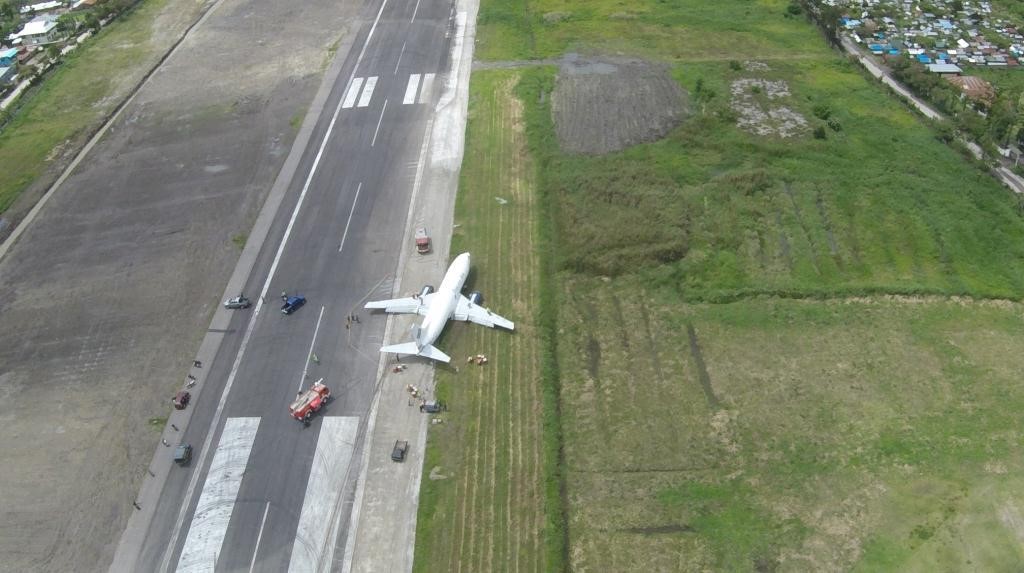 An Investigation was carried out by the Indonesian National Transportation Safety Committee (NTSC) - the Komite Nasional Keselamatan Transportasi (KNKT). The FDR was removed from the aircraft and some relevant data was subsequently downloaded. However, whilst the installed FDR was found to be capable of recording up to 32 parameters, it was only possible to retrieve 20 recorded parameters from 52 flights including the accident flight although these did include airspeed, heading, roll, pitch and yaw which, in the absence of latitude and longitude position recording, allowed the determination of the aircraft flight path. It was also noted that the aircraft was configured in a way that allowed around 300 parameters to be recorded if a suitable FDR was installed. ATC voice recordings were also available.

It was noted that during pre flight preparation carried out at around 0630 local time on 14 September, the flight crew had received weather information which indicated that low cloud had been observed close to 3 nm final for the expected landing runway 15 at Wamena, which is at 5,084 feet amsl in a mountainous area, but that the cloud base was “increasing from 200 feet agl to 1000 feet agl” with a prevailing visibility at the airport of 3 km. This contrasted with a minimum visibility of 4.8 km required to continue an approach to Wamena below 1000 feet agl beyond waypoint ‘PIKEY’ which, as per the illustration below, was located abeam of and just to the right of a hill called ‘Pikei’ situated 2.8 nm from touchdown.

The flight subsequently departed for the 40 minute sector to Wamena and climbed to a cruise altitude of 18,000 feet. As descent began, the flight was in VMC and the crew reported that they were “able to identify another Trigana flight ahead on the same route”. The Wamena TWR controller instructed the flight to report position over ‘JIWIKA’ (see the illustration below) and when it did so advised that the flight was number three for landing and should commence an orbit over point ‘X’ located on 8nm out on final approach to runway 15. 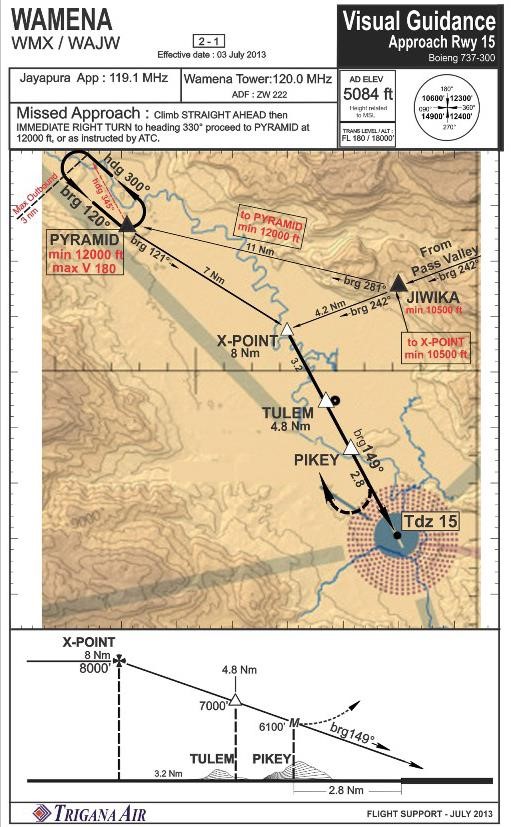 The Operator’s Visual Guidance Approach Chart for Runway 15 at Wamena. [Reproduced from the Official Report]

During the second orbit, clearance was given for the flight to commence approach on completion and report runway in sight. Soon after beginning the approach, which from the FDR was conducted throughout at about 135 KCAS, the Captain was recorded pointing out to the First Officer that the FMC (Flight Management Computer) message ‘using reserve fuel’ had appeared. Flap 40 was then selected and the Landing Checklist was completed. The Captain then levelled at approximately 1000 feet aal and when the First Officer said that they were too high, the Captain responded that “it was better to be too high than too low” and disconnected the AP. After almost half a minute level and shortly before the 1000 feet agl auto callout occurred, the Pikei was still not visible but the Captain stated that he had visual contact with a known building and descent was resumed until the 500 feet aal auto callout occurred, at which point with the runway still not in sight, the aircraft was again levelled. Level flight was again continued for a little over 20 seconds during which time the pilot of another aircraft was recorded transmitting that “only the bottom part of the Pikei was visible”. After the First Officer had confirmed that the runway was in sight “one mile away” and they were aligned with the centreline, the Captain commenced a steep final descent. Within a few seconds, the First Officer had responded by advising the Captain to go around and then when he did not do so warned that they were too near the runway for their height.

As the descent continued at up to 3,200 fpm, an EGPWS Warning ‘SINK RATE PULL UP’ was annunciated as the First Officer called “runway in sight” to TWR and two seconds later, a 3.25g touchdown occurred on the left main gear at 125 metres past the threshold of the 2175 metre-long 30 metre-wide runway quickly followed by the right main gear. This impact caused the left main gear leg to detach and the right main gear to collapse so that the left engine and lower fuselage contacted the runway surface. The aircraft then veered to the right, departed the runway and stopped approximately 1,890 meters from the threshold.

In addition to the collapsed main landing gear, the nose landing gear and both inner flaps were broken, the left engine cowling was detached, the leading edge and the lower skin of the right horizontal stabiliser were respectively dented and perforated, the aft lower fuselage was abraded and the left wing to fuselage fairing torn.

The Wamena METAR issued at the time of the touchdown gave the visibility as 3000 metres in mist with BKN cloud at 100 feet agl, the latter being a drop in the cloudbase from 400 feet since the METAR issued half an hour earlier. No prior relevant lack of airworthiness was found in respect of the aircraft and according to the accepted load and trim sheet, it was operating within the allowable weight and balance envelope. It was also noted that although Wamena was equipped with an NDB, no officially published instrument approaches were available and that the VASI was inoperative at the time of the accident.

It was observed that the excessive rate of descent after a period of level flight at 500 feet agl was up to four times the rate which would normally have been required at the applicable approach speed (which was maintained) and had involved a pitch down of up to 11°. This was a direct consequence of the Captain’s decision to begin descent when so far above the indicative approach profile and so close to the runway and almost certainly not visual until around 400 feet agl. This decision also followed the prior breaching of the minimum descent altitude unless visual with the runway and continuation of the approach despite the First Officer’s go around call. The rate of descent at touchdown as a result of flare action was still 2,300 fpm, almost four times the CS25 certification requirement that the landing gear must be able to support a 600 fpm rate of descent at that moment. There was also no evidence of any attempt to react as mandated to the EGPWS ‘PULL UP’ Warning. In addition to all of this, it was also clear that no landing clearance had been issued.

The Investigation formally identified the Contributory Factor in respect of the occurrence as “having noted that the previous aircraft had landed safely, the Captain was confident that a safe landing could be made and (therefore) disregarded several conditions (which) required a go around”.