On 20 December 2011, the experienced Captain of a Sriwijaya Air Boeing 737-300 flew an unstabilised non-precision approach to a touchdown at Yogyakarta at excessive speed whilst accompanied by a very inexperienced First Officer. The aircraft overran the end of the 2200 metre-long wet runway by 75 metres . During the approach, the Captain 'noticed' several GPWS PULL UP Warnings but no action was taken. The Investigation attributed the accident entirely to the actions of the flight crew and found that there had been no alert calls from the First Officer in respect of the way the approach was flown.

On 20 December 2011, a Boeing 737-300 (PK-CKM) being operated by Indonesian carrier Sriwijaya Air on a scheduled domestic passenger flight from Jakarta to Yogyakarta as SJ230 diverted to Surabaya because of poor weather and subsequently, after refuelling, flew from Surabaya to Yogyakarta. Since the Instrument Landing System (ILS) was promulgated out of service by Notice To Airmen, a non-precision approach was flown in daylight to a visual transition. However, this was followed by a bounced touchdown at excessive speed on the wet runway and the aircraft ran off the end at a significant speed before coming to a stop over 80 metres beyond the paved surface. The landing gear partially collapsed and an emergency evacuation was carried out during which 6 of the 137 occupants sustained minor injuries. Some runway lighting and signage was damaged by aircraft impact. 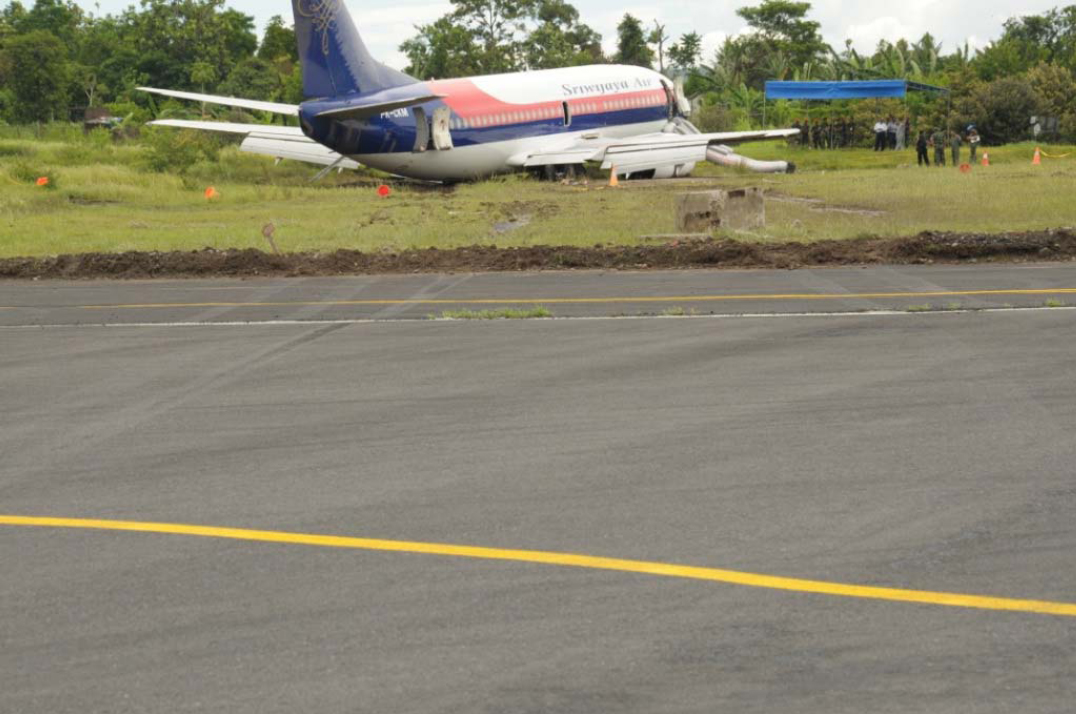 An Investigation was carried out by the Indonesian KNKT (NTSC). The SSFDR and SSCVR were both recovered from the accident site and the data used in the Investigation.

It was established that because the ILS for the runway in use at Yogyakarta was out of service, a VHF Omnidirectional Radio Range (VOR)/Distance Measuring Equipment (DME) approach was flown - with the Captain as PF. According to the AIPs chart for this procedure referred to by the Investigation (the one for Cat A/B aircraft), the applicable OCH was 380 feet and the minimum visibility was 1600 metres. The weather report issued shortly before the accident gave cloud as BKN/1400 feet and the visibility for runway 09 as 2000 metres.

There was no evidence on the CVR that an approach briefing or the reading of any Checklists had occurred, although there was some discussion in relation to aspects of the VOR/DME procedure.

The transition to a visual final approach was reported to ATC at about 1200 feet and the AP and A/T both disconnected. The aircraft was transferred to TWR and landing clearance was given. Below 1000 feet, the track was "relatively constant" but the initial sighting of the Visual Approach Slope Indicator Systems showed that the aircraft was high. Corrective action led to a persistently high rate of descent peaking at over 2000 fpm whilst engine thrust remained at flight idle until below 200 feet. Below 600 feet, 3 EGPWS 'Sink Rate' Alerts were annunciated, two of which were followed by PULL UP Warnings. None of these led to any appropriate response except co-incidentally.

Touchdown, initially followed by a bounce, occurred at a recorded speed of 156 KCAS, 18 knots above the reference speed corresponding to the ELW of 52 tonnes. Final configuration for landing - flaps reaching 40° from 30° - did not occur until after touchdown due to their selection at greater than the applicable limiting speed resulting in load relief at any airspeed greater than 158 KCAS. After landing, thrust reversers appeared to be briefly deployed but then N1 was at Idle until the end of the runway approached when they appeared to have been deployed again. Maximum (auto) brake pressure and the armed ground spoilers were automatically activated immediately after touchdown.

As the end of the runway approached and it became clear that the aircraft would not stop on the paved surface, the Captain intentionally steered it to the left. The final stopping position (see below) placed the tail of the aircraft 75 metres from the end of the runway and 54 metres to the left of the extended runway centreline. The nose and right main landing gear collapsed and the subsequent emergency evacuation was via the slides at the two forward doors. The two rear doors were not opened because it was considered by the cabin crew stationed there that (both) door sills were "too close to the ground". A passenger on a stretcher was evacuated with the assistance of the ground rescue services.

It was noted that the Captain had logged more than 100 flying hours in every one of the six months prior to the accident which it was considered "may have led to pilot fatigue".

It was also noted that after the earlier diversion to Surabaya, one of the passengers had expressed his disappointment at the decision to divert there and thus delay arrival at Yogyakarta directly to the Captain and that circumstantial evidence indicated that this may have influenced his subsequent conduct of the flight.

The Investigation considered that the evidence from the CVR, in particular the absence of comment or intervention by the First Officer in respect of the unstabilised approach were indicative of poor Crew Resource Management.

The Conclusion of the Investigation was that the accident had occurred as a consequence of a combination of fixation and complacency which led to the decision to continue the unstabilised approach to a landing contrary to Operator SOPs in respect of both Stabilised Approach criteria and response to Terrain Avoidance and Warning System (TAWS) Warnings.

Safety Recommendations were made as a result of the Investigation as follows:

The Final Report was published in 2013 and the following year was made available in English language translation.