On 28 September 2016, a Boeing 737-400 and a Cessna 172 both on IFR Flight Plans came into close proximity when about to turn final on the same non-precision approach at Girona from different initial joining routes. The Investigation found that two ACC sector controllers had issued conflicting approach clearances after losing situational awareness following a routine sector split due to an area ATC flow configuration change. The detection of the consequences of their error had then been hindered by a temporary area low level radar outage but helped by timely visual acquisition by both aircraft and a TCAS RA.

On 28 September 2016, a Boeing 737-400 (SP-ENA) being operated by Enter Air on an international non revenue positioning flight from Warsaw to Girona as ENT 1237 and a Cessna 172 (EC-JOB) being operated by Barcelona Flight School for instructional purposes out of Sabadell were both making procedural VOR/DME approaches to runway 02 at Girona under IFR but in day VMC. Both pilots had the other aircraft in sight as they neared final approach from opposite directions and when a TCAS RA was annunciated on board the 737 and it became visually obvious that continuing with their respective tracks would be hazardous, the Cessna initiated a 360° turn to clear the anticipated track of the 737 and any risk of collision was averted.

An Investigation was carried out by the Spanish Commission for the Investigation of Accidents and Incidents (CIAIAC). The QAR from the 737 was downloaded by the Operator and relevant data provided to the Investigation. Available recorded ATC data were also obtained. The prevailing weather conditions included clear skies and good visibility and it was considered that the weather had no bearing on any aspect of the conflict.

It was established that almost 25 minutes prior to the occurrence of the investigated loss of separation, a fault had led to an unexpected loss of ACC radar returns from all aircraft below 3,200 feet and a complete loss of radar at Girona TWR. Since the Barcelona ACC handled IFR approaches to Girona before transferring them to Girona TWR for landing, this complicated the traffic situation for Girona arrivals. Six minutes later, and shortly after one aircraft had been cleared by Barcelona to make a runway 02 approach to Girona from the hold at the CLE VOR to the south of the airport, the Barcelona TMA configuration was changed from that used to accommodate westerly runway use at Barcelona to that used to accommodate easterly runway use there. Due to the resulting variation in sector traffic loading, this involved dividing one sector into two, which occurred 3-4 minutes later. One of the two new sectors (D1E) was taken over by the two controllers who had been running the original larger sector and the other, TGR, was taken over by two new controllers. 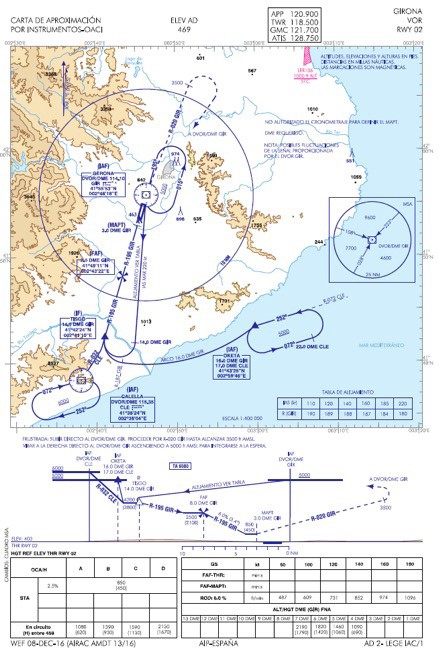 The Runway 02 VOR/DME Procedure at Girona showing the TISGO IAF where the two alternative routings onto Final Approach meet and where minimum separation occurred. [Reproduced from the Official Report]

The 737 inbound from the east to Girona was transferred to sector TGR and instructed to continue descent whilst the TGR controller co-ordinated its 16DME arc join for the runway 02 VOR/DME approach with Girona TWR. The TGR sector controller stated that the 737 would be number 2 to the aircraft which had just left the CLE hold to make the same approach. On hearing this, the Girona TWR Controller asked "if EC-JOB (the 172 which he was expecting) would be next" but "got no reply". To ensure separation from the traffic already cleared for the approach, the TGR sector controller instructed the inbound 737 to take up the hold at OKETA near to the approach end of the DME arc being flown. It subsequently received a clearance to join and complete the approach from OKETA and is transferred to TWR.

Meanwhile, with the 737 having just confirmed to Girona TWR that it was still on the final part of the arc west of OKETA, the sector D1E controller transferred the Cessna 172 to TWR without informing sector TGR. The Girona TWR Controller had no co-ordination from any ACC sector but was told that the 172 was descending to 4,200 feet "as cleared". At this time the radar recording showed that it had 3 nm to run to the runway 02 IAF 'TISGO' from the south, the same position which the 737 was also approaching from the east. Thirty seconds after beginning the check in with TWR, separation was lost between the 737 and the 172 close to TISGO. The ACC radar recording showed that the closest point of approach was 0.4nm laterally and 200 feet vertically with the 737 level at 3,740 feet. A 16 second (unspecified) TCAS RA was generated on board the 737 but with both aircraft in visual contact with each other, the 172 resolved the situation by beginning a 360° turn to the left and subsequently followed the 737 down the approach.

It was found that the conflicting clearances to commence a 02 VOR/DME approach had been given by the sector controllers concerned less than a minute apart. It was noted that just as the two aircraft were at their closest, the low level radar which had failed 24 minutes earlier had restarted, showing the Girona TWR controller that the two aircraft he was working were almost exactly co-located.

The Investigation found that the outage of the low level radar and associated communications had been initiated by the opening of a thermo-magnetic circuit breaker at Girona Airport and when the associated reserve batteries were depleted, a total loss of power had occurred. It was noted that "although an (visual only) alarm was triggered when the breaker opened, the airport’s technicians were offsite when it happened" and thus unable to restore the network before the batteries ran out.

The Main Cause of the event was identified as "the loss of situation awareness of the controllers in Barcelona ACC Sectors D1E and TGR".

Safety Action agreed as a result of the various effects of the voice and radar data communications failure which had materially contributed to the conflict was noted as having been the "replacement of the differential breaker with one that resets automatically and the installation of an aural alarm".

Two Safety Recommendations were made on 15 November 2016 as a result of the Investigation whilst it was in progress as follows:

The Final Report of the Investigation was approved on 28 June 2017. No further Safety Recommendations were made in it.