On 16 June 2021, a Boeing 737-400 was taxiing for departure at night after push back from stand when the ground crew who completed the push back arrived back at their base in the tug and realised that the tow bar they had used was not attached to it. The aircraft was prevented from taking off and it was then found that it had taxied over the unseen towbar and sustained damage to both nose gear tyres such that replacement was necessary. The Investigation concluded neither ground crew had checked that the area immediately ahead of the aircraft was clear.

On 16 June 2021, a Boeing 737-400 (EC-MIE) being operated by Swiftair for Leipzig-based European Air Transport on a non-scheduled international cargo flight from East Midlands to Vitoria Spain as BCS48M was about to takeoff in normal night visibility when ATC advised that they had been informed that the towbar used for pushback had been left on the stand and that the aircraft should be externally inspected. When it was, both nose landing gear tyres were found to have sustained enough damage to require replacement before flight.

A Serious Incident Investigation was carried out by the UK AAIB. The 54 year old Captain of the flight involved had a total of 11,750 hours flying experience of which 9,570 hours were on type.

The pushback from stand 99 on the West Apron was conducted by a ground crew consisting of a tug driver and a headset operator and was uneventful. On completion, a chock was placed in front of the nose wheels to prevent the aircraft from moving whilst the towbar was disconnected. At this point, the aircraft Captain advised the headset operator that he could disconnect his headset and he would await a ‘visual clearance’ signal and sight of the nosewheel steering bypass pin from the right hand side of the aircraft.

Upon clearance from the headset operator, the tug driver reversed the tug slightly to allow him to disconnect the towbar from the tug which he then did and then removed the nosewheel steering bypass pin and disconnected his headset. Meanwhile, the tug driver turned the tug around and got out to re-connect the towbar to the rear of the tug. He placed the towbar on top of the rear attachment on the tug but before he secured it to the tug with a drop-in pin, he reported seeing the headset operator walking away from the aircraft with the chock still in front of the nosewheel (this was confirmed on CCTV, see the first illustration below). He then left the towbar on top of the attachment and retrieved the chock and placed it in the basket on the tug before driving clear to collect the headset operator without attaching the towbar to the tug so that it remained immediately in front of the aircraft. Thereafter, the headset operator signalled the visual clearance and once he had entered the vehicle, the tug was driven away in the direction of the towbar parking area before the aircraft had started to taxi.

As the aircraft began to move forward with the Captain as PF, the First Officer reported having detected something similar to a momentary application of the toe brakes but on asking if the Captain had checked the brakes in this way, he replied that he had not. The abandoned tow bar had not been visible under the aircraft nose prior to the aircraft moving.

When the tug arrived at the towbar parking area, the headset operator got out of the tug to disconnect the towbar to find it was not there and, having informed the tug driver, the latter immediately drove back to stand 99 without the headset operator. After entering the manoeuvring area without first obtaining ATC permission, he found that the towbar had sustained damage indicating the departing aircraft had taxied over it. He immediately informed ATC and his supervisor and the latter informed airport operations. By this time, the aircraft had reached the runway 27 holding point. After the crew had been informed of the situation by ATC and advised that the aircraft would have to be externally inspected, clearance was given to taxi to the East Apron where, on arrival, it was shut down and towed to a stand. Two damaged tyres were found and replaced and the otherwise undamaged aircraft subsequently departed after a delay of almost four hours. 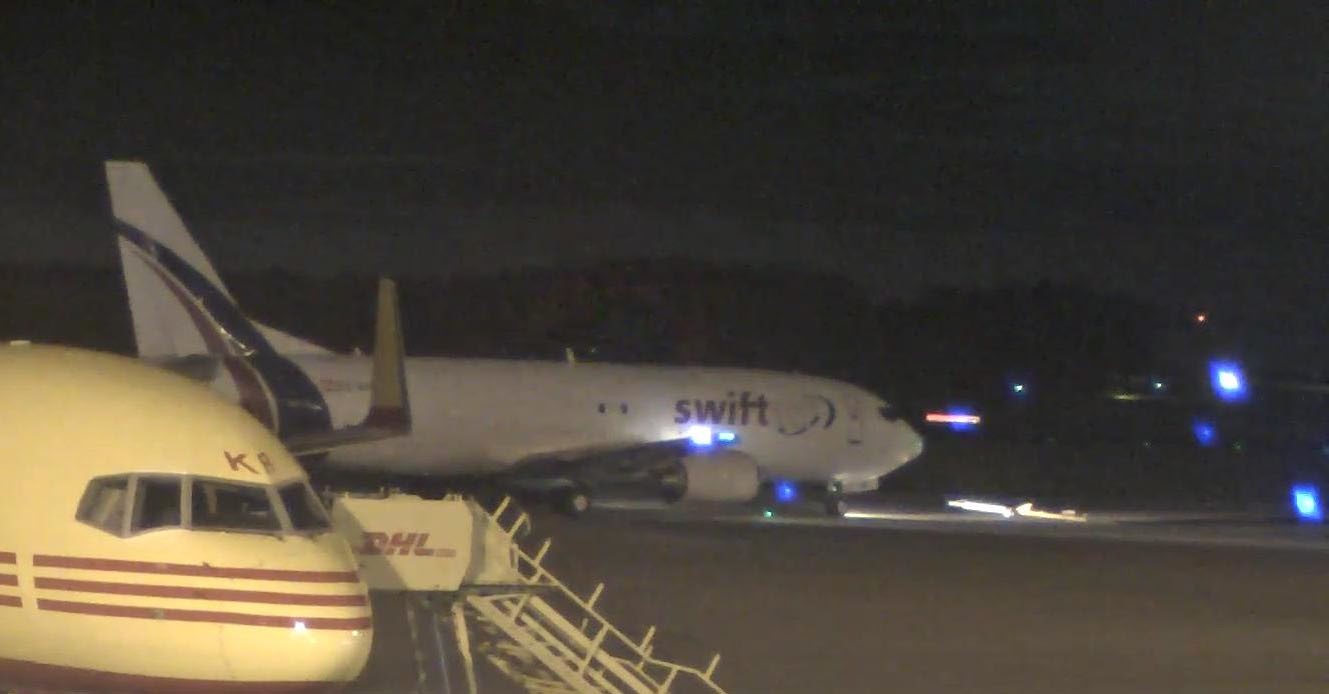 The towbar visible in front of the aircraft just before it began to taxi. [Reproduced from the Official Report] 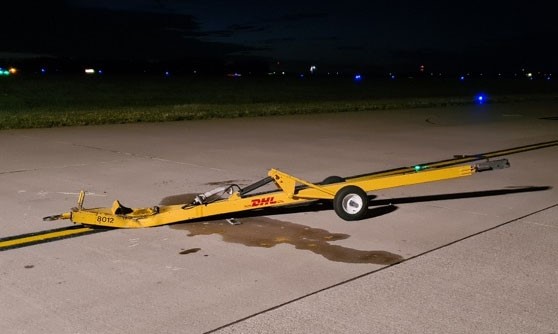 The damaged towbar on the taxi centreline. [Reproduced from the Official Report]

The two ground crew involved, who were both qualified to act as either headset operators or tug drivers, subsequently provided statements which included, but were not limited to, the following remarks:

Safety Action taken during the Investigation by the ground handling service provider was recorded as including the addition of explicit procedural directives to those involved in a pushback as follows:

The Final Report of the Investigation was published on 13 January 2022. No Safety Recommendations were made.