On 10 December 2016, a Boeing 737-400 main gear leg collapsed on landing after an approach at excessive speed was followed by a prolonged float prior to touchdown on the high-altitude Kabul runway. The Investigation found that the collapse had followed a severe but very brief wheel shimmy episode in the presence of a number of factors conducive to this risk which the aircraft operator s pilots had not been trained to avoid. It was also found that although the aircraft operator regularly undertook wet lease contract flying, their pilot training policy did not include any route or aerodrome competency training.

On 10 December 2016, a Boeing 737-400 (JY-JAQ) being operated by Jordan Aviation under contract to Safi Airways on their scheduled domestic passenger flight from Herat to Kabul as SFW502 had just touched down on runway 29 at destination after making an ILS approach in day VMC when the right main landing gear collapsed. The aircraft slid along the 3511 metre-long runway and stopped 326 metres from the end of it. An emergency evacuation followed as the AFS contained a fire risk at the damaged right engine which had supported the aircraft after the gear collapse. Although the aircraft sustained substantial damage, none of the 173 occupants of the aircraft were injured. The runway surface was damaged. 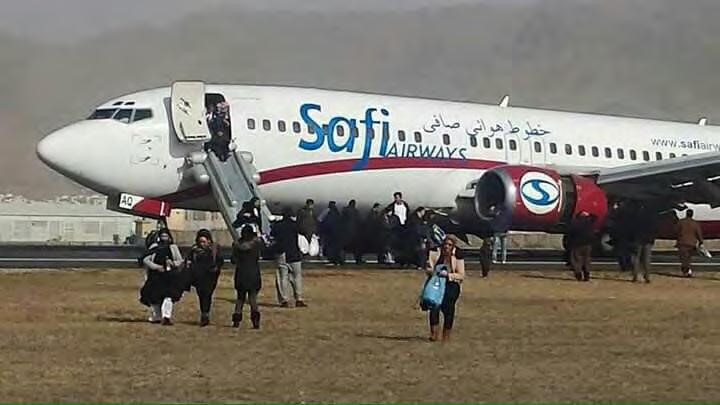 The aircraft with the evacuation in progress. [Reproduced from the Official Report]

An Investigation was carried out by the Civil Aviation Regulatory Commission of the State of the Operator, Jordan. The SSFDR and SSCVR were both removed from the aircraft and sent to the UAE GCAA AIS for download and relevant data were recovered from both.

It was established that as the one hour flight from Herat neared Kabul, in VMC, the aircraft had been radar vectored onto an ILS approach to runway 29 and that the applicable Vref was 142 KIAS for an ELW (Expected Landing Weight) of 53,902 kg. The actual landing weight was subsequently calculated as having been 362 kg less than the MLW (Maximum Landing Weight) of 56,200 kg. It was noted that this had been a consequence of the considerable quantity of additional fuel above that required which had been carried on the sector. The Captain stated this had been on account of Kabul’s general history of “drastic weather changes” rather than as a specific response to the TAF available prior to departure from Herat. It was noted that the ILS GS on this approach was set at 3.5°, slightly higher than standard. The METAR timed shortly before the accident occurred included a mean surface wind velocity of 150°/09 knots, equivalent to a crosswind component of 6 knots from the left. CVR data showed that the final spot wind from ATC prior to touchdown was 190°/15 knots. However, FDR data showed that during the approach, there had been an average 7 knot tailwind component and an approximate 15 knot left crosswind component.

With the benefit of FDR data analysis and flight crew statements, it was established that the aircraft had been configured for a flap 30 landing and the AP had been disconnected at 780 feet aal with the A/T remaining engaged for landing. It was estimated from available FDR data that the airspeed on final approach had been maintained at approximately 162 KIAS - around Vref + 20. The rate of descent between 159 feet agl and 115 feet agl was just above 1000 fpm which was sufficient to trigger a 2 second EGPWS ‘SINK RATE’ Alert to which the Captain responded with “continue”.

The into wind left crab angle was nearly all removed at touchdown after a right rudder pedal input and touchdown occurred at approximately Vref+16 (158 KIAS) and at a ground speed of 178 knots. The runway threshold was crossed at 40 feet agl but main gear touchdown did not occur until 1067 metres along the runway and the recorded rate of descent at touchdown was only 58 fpm. The speedbrakes then deployed almost immediately and, one second later, thrust lever movement towards reverse idle began. Three seconds after main gear touchdown, the right main gear collapsed and detached and the right engine settled on the runway surface. The centreline of the 50 metre-wide runway was essentially maintained as the aircraft slid supported by the right engine and the remaining landing gear legs and it eventually stopped 44 seconds later at an estimated 3185 metres beyond the landing threshold of the 3511 metre long runway.

The Captain declared an emergency to the ATC and a PA was made to evacuate the aircraft using the left side exits which was accomplished with no injuries reported. A right engine fire warning was annunciated and the crew responded by completing the corresponding QRH procedure including discharge of both fire extinguisher shots. The airport RFFS arrived and, having observed smoke coming from right side, immediately began spraying foam onto and around the damaged right engine.

Inspection of the runway after the accident found “oscillating tyre markings typical of wheel shimmy prior to the point where the right main gear collapsed” and inspection of the detached gear leg found that its torsion link and shimmy damper were both broken.

The Investigation determined that the approach had been unstable assessed against the applicable 737 FCTM criteria on the basis that the tailwind approach required Vref +5 rather than Vref + 10 and because the actual approach speed was 15-18 knots higher than Vref + 10 anyway. It was noted that the EGPWS Alert received was not indicative of an unstable approach since it could be expected on an approach to a high altitude (5877 feet amsl) airport with the prevailing steeper than normal (3.5°) glideslope due to the higher TAS and consequently higher groundspeed. However, the excessive airspeed and the resultant groundspeed of 180 knots would have required an average of 1064 fpm. The content of the FCTM on flare technique was also reviewed. It was found to include a number of best practices which were directly relevant to the circumstances of this event in particular - “do not prolong the flare in an attempt to achieve a perfectly smooth touchdown - a smooth touchdown is not the criterion for a safe landing”. In the landing under investigation, although the aircraft crossed the threshold close to the target height, it then remained airborne just above the runway until well past the TDZ. Both pilots subsequently stated that their intention was “to bleed the energy of the aircraft before touchdown to avoid a hard landing” and stated that this technique is always used at high altitude airports such as Kabul (ARP 5877 feet amsl) to avoid high energy touchdown subject to the available landing distance.

Of most significance, however, was that the characteristics of the accident landing were found to be consistent with previous landing gear shimmy events. The aircraft touched down at a high ground speed and with a very low rate of descent and it took between 1 and 1½ seconds for the transition from ‘air’ to ‘ground’ to be recorded. This meant that the struts were extended for longer than usual and as a result, the torsion links of the shimmy damper remained in an extended, vertical position. In this condition, the damper has less mechanical advantage for longer periods of time. Despite the presence of shimmy damper hardware, which is designed to reduce the torsional vibration energy generated during landing, aircraft may still be vulnerable to main landing gear shimmy if very soft touchdowns are made.

The Investigation noted a Boeing review of this risk published in 2013 which discusses wheel shimmy events including the occasional severe events that cause landing gear collapse. This source states the best way to prevent shimmy damper failures is “proper maintenance of the landing gear components” whilst also noting that “the risk of landing gear shimmy events is greater at high altitude airports”. A 2015 Boeing 737 Flight Operations Technical Bulletin (FOTB) was also noted to have stated that vertical speeds of less than 60 fpm at touchdown may induce main gear shimmy”.

However, the Investigation considered that, given the prevalence of similar shimmy-induced gear failures on Boeing 737-400s, “there is clearly a design fault with the gear in combination as installed on this 737 variant”. It was also noted that the Boeing FCOM did not state that pilots need to beware of shimmy conditions at high speed and with soft landings and that this can cause a failure of the gear. The Boeing explanation of this omission was that they “do not provide limitations to pilots on this because maintenance, tyre wear, runway conditions, landing speed and firmness of landing can all, to varying degrees, contribute [to an enhanced shimmy risk]”. Additionally, it was stated by Boeing that they “do not, as a normal course of action, provide consequences” in the FCOM.

In respect of the possible operational or airworthiness reasons why shimmy dampers on 737 Classic variants might be ineffective, Boeing advised that detailed studies had identified a number of possibilities which, in an approximate order of likelihood, were as follows:

In respect of these risk points, the Investigation noted that according to the available maintenance records for the aircraft, all airworthiness requirements had been correctly dealt with at the time of the accident.

In respect of the aircraft operator, it was noted that their wet lease operations such as the one which was being fulfilled by the accident aircraft can involve operations at “strange airfields” but that Jordan Aviation pilot training “does not account for Route and Airfield competency”.

The formally-stated Probable Cause of the accident was that “the (main landing gear) struts were extended for a (relatively) long period of time (and) as a result, the torsion link of the shimmy damper remained in an extended vertical position, in which position the damper had less mechanical advantage for a longer period of time (than usual) despite the presence of shimmy damper hardware which is designed to reduce the torsional vibration energy generated during landing”.

One Safety Recommendation was made:

The Final Report of the Investigation was completed in April 2017 and subsequently published.