On 3 November 2015, a Boeing 737-400 continued an unstabilised day approach to Lahore. When only the First Officer could see the runway at MDA, he took over from the Captain but the Captain took it back when subsequently sighting it. Finally, the First Officer took over again and landed after recognising that the aircraft was inappropriately positioned. Both main gear assemblies collapsed as the aircraft veered off the runway. The Investigation attributed the first collapse to the likely effect of excessive shimmy damper play and the second collapse to the effects of the first aggravated by leaving the runway.

On 3 November 2015, a Boeing 737-400 (AP-BJO) being operated by Shaheen Air International on a scheduled domestic passenger flight from Karachi to Lahore as NL-142 landed off an unstabilised non-precision approach at Lahore in day IMC and both main landing gear assemblies collapsed as it departed the side of the runway. An emergency evacuation followed and none of the 121 occupants were injured during the excursion or the subsequent evacuation but the aircraft sustained extensive damage. 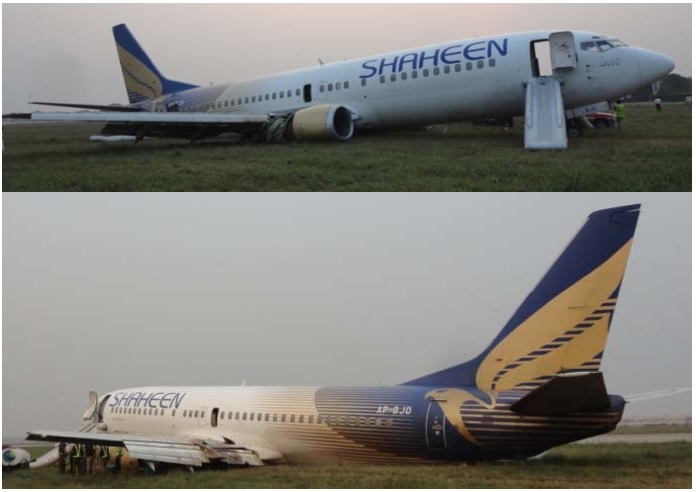 An Investigation was carried out by the Pakistan Safety Investigation Board (SIB). The FDR and CVR were recovered from the aircraft and their data successfully downloaded. It was noted that the 59 year-old Captain, who had been PF for the accident flight, had accumulated 19,302 hours total flying experience of which the 4,859 hours on type had included 3719 hours in command. The 34 year-old First Officer had 2,076 hours total flying experience of which 410 hours were on type.

It was established that both pilots had reported late for duty prior to the departure from Karachi, the rostered report time being 90 minutes prior to the scheduled flight departure time (STD). The First Officer arrived ahead of the Captain and obtained operational briefing and the weather for Lahore which showed that it was below the minimum RVR for the available approaches at that time although with an improvement forecast. The Captain arrived 45 minutes before the STD. A NOTAM obtained by the First Officer stated that the main runway at Lahore (36R) was not available due to work to upgrade the ILS and instead a VOR/DME approach was available on runway 36L. It was found that this information was not accorded the appropriate degree of pre-flight attention by the crew.

After takeoff, the flight climbed to its planned cruising altitude of FL 330. Before the top of descent, the latest destination weather was obtained and included a visibility of 1,200 metres, which was below the minimum of 1,600 metres required for the available VOR/DME approach by a Category ‘C’ aeroplane. In the expectation that the weather would improve, the approach brief was conducted for that approach and on transfer to Lahore ACC, the Captain instructed the First Officer to request initial positioning to a 10 mile final for closed runway 36R, apparently because he was planning to follow the ILS procedure for runway 36R and then break off after becoming visual with the runway to land on runway 36L - a non-standard procedure. Lahore ACC declined this request and confirmed that the visibility was still below that required for the available VOR/DME approach.

On checking in with Lahore APP, the controller noted that the aircraft was to the right of track and queried this. The CVR record disclosed that prior to the First Officer’s reply, the Captain had “quickly asked him to tell ATC that they were following the RNAV procedure for runway 36L”. The controller acknowledged this and instructed them to make a corresponding position report whilst continuing descent as cleared to FL 070. The Controller made no mention of her previous clearance for a VOR/DME approach to runway 36L. Thereafter, the prescribed RNAV procedure was followed but remained between 2,000 and 2,500 feet above the procedure vertical profile. To increase the rate of descent, Flaps-1, 2 and 5 were selected “in quick succession” but the speed brakes were not used. The APP controller asked if they intended to continue the approach or would discontinue it due to being high and the Captain “immediately prompted the First Officer to respond that they would continue” and the First Officer replied “affirmative, we can make it”. The First Officer proposed using the speedbrakes to regain the correct vertical profile and the CVR recorded his response in an exhausted voice which it was considered was an “indication that he was unable to cope with the difficult situation”.

As the aircraft reached an approach procedure waypoint located 9.7 nm from the runway 36L threshold, it was at 5,400ft with 180 KCAS and the radar controller, observing this, cautioned that they should have been at 3,000 feet and advised them to continue at their discretion, confirmed the missed approach procedure as climb in runway heading and instructed them to contact TWR. Immediately after this, the Captain disengaged the AP and increased the rate of descent to between 2,000 and 3,500 fpm which increased the speed beyond that for the now-deployed Flap 30. It was concluded that by this time “the approach had become unstabilised and warranted a go around”. The First Officer reset the Flight Directors in anticipation of a go round but the approach was continued. As the aircraft passed 4.6 nm from the runway threshold, it was at 1,200 feet agl with 170 KCAS but still without runway visual reference. It was found that, contrary to their request for and approval of an RNAV approach, the Captain was actually making a VOR/DME approach for which the required minimum visibility was not available. A landing clearance was given by TWR and acknowledged. Passing 460 feet agl, the runway was not in sight and the speed was 14 knots above Vref. The VOR/DME procedure MDA was 1,100 feet QNH, equivalent to an MDH of 388 feet. Then, just before the auto callout of “Minimums”, the First Officer sighted the runway towards the right of track, took over the controls and asked the Captain to inform ATC that runway was in sight. FDR data recorded that the aircraft temporarily levelled off in the vicinity of the MDA for approximately 7 seconds as a turn to the right was made. Descent with the First Officer as PF then continued with an erratic rate of descent until the Captain sighted the runway at approximately 150 feet aal and took over control from the First Officer but failed to properly align the aircraft with the runway centreline and as the auto callout of 100 feet occurred, the First Officer “forcibly took over the controls in order to land the aircraft” with the Captain reportedly unaware that he was still holding his control column despite repeated calls from the First Officer to desist.

The throttles were retarded to idle and touchdown occurred 1,400 feet past the threshold on the left half of the runway initially on the right main gear only with both pilots still holding the controls whilst the First Officer made the landing. After an earlier increase in thrust whilst the aircraft had briefly levelled after the First Officer had seen the runway and initially taken control, the recorded touchdown airspeed was 174 knots, 40 knots above the Vref. The speed brakes had been armed and were automatically deployed after which there was a bounce and left main gear touched hard followed by shimmy and the whole left main gear assembly braking off from the airframe. The thrust reversers were deployed and wheel braking commenced but due to the high drag generated by the rubbing of the left engine cowling on the runway surface, the right main gear also collapsed due to overload as the aircraft departed the runway onto soft ground. As this happened, the fuselage was left resting on both engines and nose gear which remained intact and continued to skid on the soft surface for approximately 2,450 metres before finally coming to a stop located 2,530 metres from the threshold and 60 metres from the centreline of the 46 metre-wide runway.

Once the aircraft had stopped, the Captain did not ask the First Officer to run the engine shutdown and passenger evacuation Checklists and this was done by the First Officer. Although the aircraft fuselage remained intact, it was damaged on the right side of the tail section where, fortuitously, the seats were not occupied. In addition to the detachment of both main landing gear assemblies, the wing structure adjacent to the main landing gear attachment points was extensively damaged as were both engines as a direct consequence of landing gear assembly detachment.

Blood samples were taken from both pilots after the accident and the results of those given by the Captain showed a blood alcohol level of 83 mg/dl compared to a threshold for impairment of the central nervous system of 50 mg/dl. It was concluded that this may have contributed to “judgmental errors as evident” and that the measured blood lactate level of 70 mg /dl could be interpreted as indicative of “fatigue due to increased stress” since the normal level is 4.5 - 23 mg/dl. There were no abnormal findings in the medical investigation report on the First Officer.

EDITOR’S NOTE: At the time of this accident there were no prescribed limits for pilot blood alcohol level in Pakistan and no further reference was made to this finding by the Investigation.

No firm evidence was found that any prior lack of airworthiness had directly contributed to the excursion and the high speed landing itself was found to have created a loading on the left main gear assembly of “approximately its design limit level” with the right main gear then collapsing due to overload stresses resulting from the left main gear collapse as it too departed the runway. However, in the case of the left main gear, it was suspected that its collapse may have been the consequence of more than the specified limits of play in the linkages of shimmy damper mechanism which would have induced torsional vibrations in the assembly. These would have hastened the failure of the shimmy damper altogether and the resultant “torsional excitation” in the gear assembly due to free pivoting of the wheels along the vertical axis would then have caused its complete collapse. Although not proved to be contributory, the Operator’s Maintenance Schedule in respect of shimmy damper and linkages during ‘C’ Checks was found not to include requirements for enhanced frequency checks in the light of recommendations contained in an applicable Boeing Service Letter.

The Investigation formally recorded the Cause of the accident as follows:

Fifteen Safety Recommendations were made as follows:

The Final Report was published on 27 September 2017.