On 2 October 2008, a Boeing 737-400 being used for flight crew command upgrade line training unintentionally landed off a non precision approach at Palembang in daylight on a taxiway parallel to the landing runway. Neither pilot realised their error until the aircraft was already on the ground when they saw a barrier ahead and were able to brake hard to stop only 700 metres from touchdown. It was found that the taxiway involved had served as a temporary runway five years earlier and that previously obliterated markings from that use had become visible.

On 2 October 2008 a Boeing 737-400 being operated by Garuda on a domestic scheduled passenger flight from Jakarta Soekarno-Hatta to Palembang with line training taking place made a landing at destination on the taxiway parallel to runway 29 for which landing clearance had been given. Once on the ground, the aircraft was able to decelerate before reaching a barrier sighted ahead during the landing roll. None of the 55 occupants were injured and were able to disembark the aircraft via steps.

An Investigation was carried out by the NTSC. The DFDR was successfully downloaded but the CB to disable the 30 minute Cockpit Voice Recorder (CVR) was not tripped after the occurrence and so the relevant data had been overwritten.

It was found that the flight had been operated as a line training flight with a First Officer undergoing upgrade training for command occupying the left hand seat as PF and the Training Captain acting as aircraft commander occupying the right hand seat. It was noted that prior to beginning training on the Boeing 737 fleet some 3½ months earlier, the First Officer had spent 18 years as a First Officer on the Operator’s Boeing 747 fleet and that the incident landing was his eighth at Palembang since beginning 737 training.

Although the airport had been in sight prior to the issue of a landing clearance for 2500 metre-long runway 29 about two minutes prior to touchdown, the approach was continued manually with the First Officer remaining ‘head down’ so as to improve his instrument scan during a non precision approach. He was therefore relying on the supervising PM to maintain external awareness. At a late stage, ATC saw that the aircraft was not on the correct approach track path and closer to the taxiway extended centreline than the runway extended centreline but had not instructed a go around as in accordance with prevailing ATC procedure, such an instruction may only be given if “the runway is unsafe to land”. The latter condition was defined as when “there is any other aircraft, vehicle or any other hazard in the runway”.

After touchdown some 500 metres along the parallel taxiway, both pilots then realised their error and also saw a barrier ahead indicating that some part of the taxiway was closed. The aircraft commander immediately applied manual braking and the aircraft stopped approximately half way along the taxiway after a landing roll of about 700 metres.

It was noted that five years previously, the taxiway on which the landing took place had been temporarily used as a runway whilst the adjacent runway was undergoing maintenance. Although the runway markings from that time had initially been obliterated, by the time of the investigated event, some of them had become clearly visible again, as seen on the photograph below taken during the Investigation. 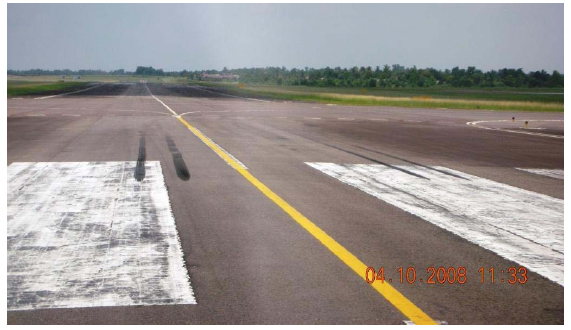 However, the second photograph included in the Official Report shows that the perspective from short finals differs radically between the runway and the taxiway. 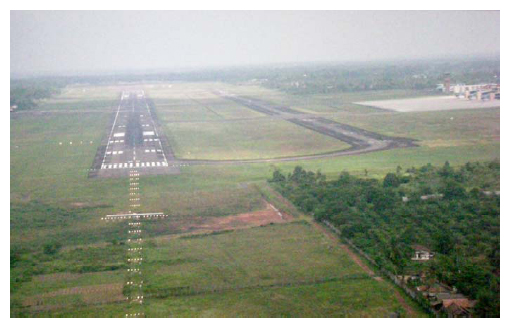 It was also noted that the approach to runway 29 had been made in Visual Meteorological Conditions (VMC) using the VOR/DME procedure based on a transmitter located 4nm beyond the beginning of the runway. This had been necessary because the runway 29 ILS had out of service for the preceding five months due to relocation of the equipment.

It was noted that there had previously been a number of reports that the promulgated VOR track to the runway (291º), two degrees different to the runway alignment of 293º, resulted in a track which, if followed below MDA, would bring an aircraft to a position approximately 200 metres to the right of the runway centreline at its landing threshold. Such a position would be closer to the taxiway on which the aircraft landed than the runway. However, the published procedure had been subject to calibration 2½ months into the temporary regular use period and found acceptable.

The Investigation found that the Causes of the Serious Incident were:

Safety Action taken or intended by the Palembang Airport Operator Authority as a result of the Incident was noted as follows:

The Final Report of the Investigation was on 5 November 2011. As a consequence of advice of the Safety Action noted above, no Safety Recommendations were deemed necessary.