On 7 September 2010, a Turkish operated Boeing 737-400 flew a non precision approach at Lyon Saint-Exupéry in IMC significantly below the procedure vertical profile throughout and only made a go around when instructed to do so by ATC following an MSAW activation. The minimum recorded radio height was 250 feet at 1.4nm from the runway threshold.

On 7 September 2010, a Boeing 737-400 being operated by Turkish carrier Tailwind Airlines on behalf of Tunis Air on a scheduled passenger flight from Tunis to Lyon was instructed to make of go around by ATC when an Minimum Safe Altitude Warning (MSAW) Alert was generated because of the proximity of the aircraft to terrain whilst it was making a LOC/DME approach to runway 36R in day Instrument Meteorological Conditions (IMC). The go around and subsequent approach and landing were uneventful.

An Investigation was begun by the French Bureau d'Enquêtes et d'Analyses (BEA) upon being informed, late, of the occurrence. It transpired that following the event, ANSP staff had complied an incident report which did not include the aircraft registration marking and then sent this to the BEA the next day as the means of notification. The Investigation noted that “this delay prevented the BEA from removing the flight recorders and obtaining the testimony of the crew, who left with the aircraft later (the same day)”. However after some difficulty in establishing the identify of the aircraft operator, assistance from the Tunisian authorities, from which country the aircraft had been on short term lease to the Turkish airline involved, was obtained, in particular QAR data which included the event was supplied. It was noted that “the Turkish authorities did not respond to the request from the BEA investigators to arrange meetings with the crew and executives of the airline (involved).”

Prevailing weather conditions taken from the Meteorological Terminal Air Report (METAR)S before and after the time of event included a surface visibility of 5000 metres and lowest cloud at 500-600 feet aal. The applicable MDA for the approach flown was 1250 feet QNH, equivalent to 429 feet aal. The Investigation recorded pilot details which showed that the Swedish First Officer was inexperienced both overall and on type and also less than half the age of the 64 year - and highly experienced - Turkish Captain. Although there was no conclusive evidence as to the pilot designated as PF for the approach, the Investigation noted that it was the Captain who had made all radio transmissions to ATC, which might be taken to indicated that the First Officer had been PF.

Examination of the various sources of evidence available showed that, after failing to follow the closing radar heading given (but not acknowledged) towards the cleared LOC-only final approach track, the aircraft, level at 3000 feet in accordance with normal ATC practice, had overshot this track before returning and establishing from the opposite side. Thereafter, the final approach track (and also the subsequent go around track) had been flown accurately but descent from 3000 feet QNH had commenced shortly before the aircraft had reached lateral position for the FAF defined at range 10nm / 4000 feet QNH. Altitude had then remained continuously below the procedure vertical profile, following a smaller descent angle but still frequently taking the aircraft below the promulgated minimum safe altitude.

QAR data showed that the approach had been flown with the AP engaged in CMD mode until three seconds before the controller advised the MSAW alert to the crew and that the A/T had been engaged in MCP speed mode until the crew responded to the ATC instruction to go around by calling and initiating one. The minimum height of 250 feet agl was recorded 19 seconds after this go around call.

The Investigation found that the closing radar heading for the LOC had not been set and that the LOC mode had not been armed. It was also noted that during the subsequent descent, “the monitoring of the approach path using the published distance / altitude correlation table, a technique mentioned in the operator’s procedures in addition to the use of the green arc, was clearly not applied”.

It was noted that neither the controller phrase advising the crew of the MSAW Alert nor the immediately-following instruction to go around because of it, were in accord with applicable regulations and procedures but that the latter in particular was common practice at Lyon.

The Investigation found that it was routine practice at Lyon to vector inbound aircraft to join final approach at 3000 feet QNH whether for an ILS or a LOC/DME approach. Although the AIP Chart available to ATC showed a FAP (for ILS approaches) at 3000 feet QNH/6.9 DME, the Jeppesen chart used by the crew (shown below) showed only a FAF at 4000 feet QNH/10 DNE. Although it was not possible to establish the form in which the procedure flown would have been stored in the incident aircraft FMC, checks on an aircraft with a similar fit indicated that it was likely that only the Jeppesen-charted 4000 feet QNH FAF would have been shown. The Investigation noted that in the case of any non precision approach, “one would expect the pilot to initiate the descent at the precise value specified”, the implication (not validated because of lack of crew interview and Cockpit Voice Recorder (CVR) recording) being that this circumstance might go some way to explaining the initiation of a premature descent. 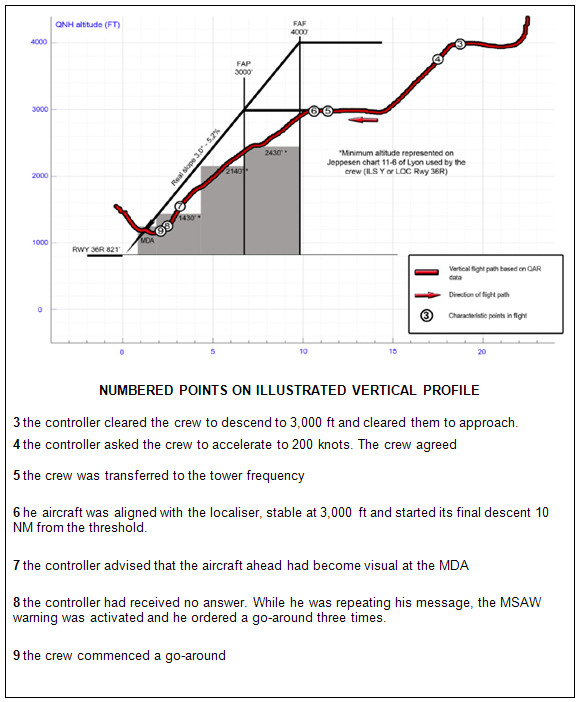 The mis-flown vertical profile compared to the IAP profile - note that this diagram shows the 3000 ft FAP which appears as a boxed ‘note’ on the AIP chart but was not on the corresponding Jeppesen Chart [reproduced from the Official Report, see Annex at the end of this summary article for the description of each event at the numbered points] The situation in respect of charting of the FAF and FAP at some other French airports was examined and varying situations were found. In the similar case of Nice, however, the Investigation was advised that any LOC approach would always descend from the charted FAF, with only the height of the ILS FAP being subject to variation by ATC. 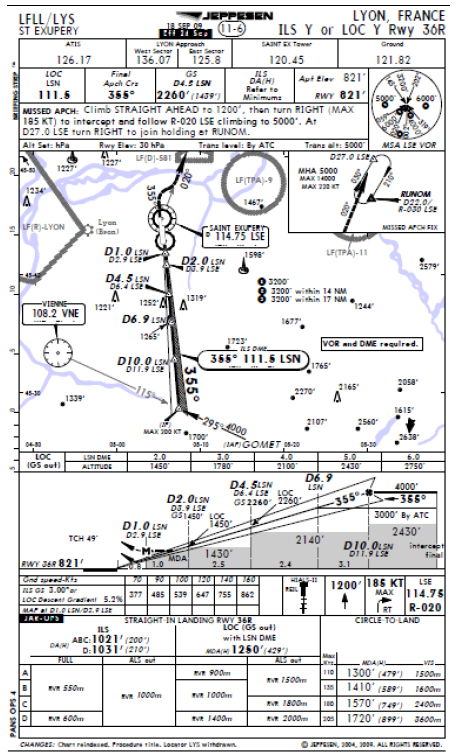 The Investigation noted that the MSAW system which alerted ATC to the below-profile position of the aircraft as it approached terrain was designed to function as follows:

“The principle of this system is to calculate an extrapolated position approximately 35 seconds from the radar track. This position is then compared with a digital model of the terrain and a database of obstacles. If the extrapolated position is located at a height below a certain threshold in relation to the ground or to obstacles, respectively 300 ft or 600 ft for one and the other of the two extrapolation hypotheses, a warning is generated. It is then displayed on all the radar screens in the IFR room and in the control tower cab, except if it is located in the exclusion zones that are intended to avoid false warnings. All the labels of the track flash red and white alternately. An aural “Low altitude alert” warning is also issued.”

The Investigation concluded that the Causes of the Serious Incident were:

And that Contributory Factors were:

Since the Investigation found the routine altitude for level flight on a closing radar heading to final approach for both precision and non-precision approaches was based on a FAP at 3000 feet and that ”ANSP procedures did not require that crews be informed of the exact identification of the final approach procedure in use prior to their approach”, four Safety Recommendations were made as a result of the Investigation as follows:

The Final Report was published in French in January 2013 and in English translation on 22 April 2013.