Runway Side Excursion During Attempted Take-off in Strong and Gusty Crosswind Conditions.

On 20 December 2008 a Boeing 737-500 being operated by Continental Airlines on a scheduled passenger flight from Denver to Houston departed the left side of runway 34R during a normal visibility night take-off roll in gusty crosswind conditions and then travelled across moderately rough but essentially level terrain before coming to stop still upright but with the fuselage broken into two pieces. A post crash fire followed. Six of the 115 occupants were seriously injured and a further 41 sustained minor injuries. 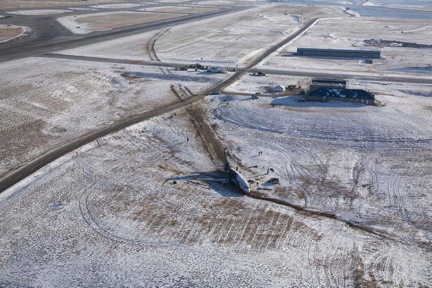 An Investigation was carried out by the National Transportation Safety Board (USA) (NTSB). It was established that the aircraft had left the runway at a speed of approximately 110 knots and that the total distance then travelled before stopping had been approximately 730 m, crossing both a taxiway and an airport service road and including a short airborne excursion following impact with uneven terrain. The cabin evacuation was found to have been promptly accomplished by the cabin crew with assistance from positioning operator flight crew. There were no announcements from the flight deck in connection with the evacuation. A fire developed on the right side of the aircraft but all occupants had been successfully evacuated before it breached the cabin.

It was established that there was no evidence of any defects in or failures of the engines, structures or systems of the aircraft, including the nosewheel steering system.

Huge amounts of recorded data on wind velocity across the airport at the time of the accident were available to the investigation, including that from 32 Low Level Wind Shear sensors from which information was also able to be displayed in the TWR.

It was confirmed that mountain wave conditions, which were widely known to commonly prevail at Denver, were extant at the time of the accident and had created strong westerly surface winds with very localised and intermittent gusts as high as 45 knots across the runway during the take-off roll. However, performance calculations made during the investigation indicated that the aircraft rudder was capable of producing enough aerodynamic force to offset the weather-vaning tendency created by even the strongest winds encountered during the accident take-off roll.

ATC were found to have cleared the aircraft for take off with a spot wind of 270° / 27 knots, which was equivalent to a cross wind component of 27 knots compared to the AFM limit of 33 knots. This was in keeping with prevailing ATC procedures which did not require the controller to provide additional information about variations in wind velocity. Use of the accident runway by other aircraft had not been followed by any adverse comment related to the gusting crosswinds which prevailed.

The conclusions of the investigation included the following:

The Investigation concluded that the Probable Cause of the event was: “The Captain's cessation of right rudder input, which was needed to maintain directional control of the airplane, about 4 seconds before the excursion, when the airplane encountered a strong and gusty crosswind that exceeded the Captain's training and experience.” It was considered that the following factors had contributed to the occurrence:

Accidents and serious incidents which include Runway Excursion (Directional Control) as an outcome:

On 30 August 2018, a Boeing 747-400F making a crosswind landing at Hong Kong which was well within limits veered and rolled abnormally immediately after touchdown and runway impact damaged the two right side engines. The Investigation found that the flight was an experienced Captain’s line check handling sector and concluded that a succession of inappropriate control inputs made at and immediately after touchdown which caused the damage may have been a consequence of the Check Captain’s indication just before touchdown that he was expecting a landing using an alternative technique to the one he was familiar with.

On 23 October 2020, an Airbus A320 taking off from Brisbane became difficult to keep on the centreline as speed increased and takeoff was rejected from a low speed. It remained on the runway and messages indicating a malfunctioning right engine were then seen. The Investigation found that one engine had surged as thrust was applied due to damage caused by a screwdriver tip inadvertently left in the engine during routine maintenance and that the pilot flying had used the rudder when attempting to maintain directional control during the reject despite its known ineffectiveness for this purpose at low speeds.

On 31 December 2019, an Airbus A330-300 flew a night ILS approach to land on the 60 metre wide runway at Port Harcourt in undemanding weather conditions but became unstabilised just before touchdown when the handling pilot made unnecessary and opposite aileron and rudder inputs for which no explanation was found. Because of this, a late touchdown on the right hand edge of the runway was followed by the right main gear leaving the runway and travelling along the hard shoulder parallel to it for just over 1000 metres before regaining it which caused runway lighting and minor aircraft damage.

On 9 February 2020, a Boeing 737-800 rejected its takeoff from East Midlands from a speed above V1 after encountering windshear in limiting weather conditions and was brought to a stop with 600 metres of runway remaining. The Investigation found that the Captain had assigned the takeoff to his First Officer but had taken control after deciding that a rejected takeoff was appropriate even though unequivocal QRH guidance that high speed rejected takeoffs should not be made due to windshear existed. Boeing analysis found that successful outcomes during takeoff windshear events have historically been more likely when takeoff is continued.

On 19 August 2012, the crew of a Flybe Finland ATR 72-200 approaching Helsinki failed to respond appropriately to a fault which limited rudder travel and were then unable to maintain directional control after touchdown with a veer off the runway then following. It was concluded that as well as prioritising a continued approach over properly dealing with the annunciated caution, crew technical knowledge in respect of the fault encountered had been poor and related training inadequate. Deficiencies found in relevant aircraft manufacturer operating documentation were considered to have been a significant factor and Safety Recommendations were made accordingly.

On 29 August 2009, an Air Algérie Boeing B737-800 departed the side of the runway during take off but then regained the paved surface after sustaining damage from obstructions, completed the take off without further event and continued to destination. Damage to one of the engines, to tyres and to two lights was discovered at the destination. ATC remained unaware of the excursion until the Operator asked its representative at Lyon to ask the airport to carry out a runway inspection.

On 16 November 2012, an Air Contractors Airbus A300 departed the left the side of the landing runway at Bratislava after an abnormal response to directional control inputs. Investigation found that incorrect and undetected re-assembly of the nose gear torque links had led to the excursion and that absence of clear instructions in maintenance manuals, since rectified, had facilitated this. It was also considered that the absence of any regulation requiring equipment in the vicinity of the runway to be designed to minimise potential damage to aircraft departing the paved surface had contributed to the damage caused by the accident.

On 17 July 2007, the commander of a TAM Airlines Airbus A320 being operated with one thrust reverser locked out was unable to stop the aircraft leaving the landing runway at Congonhas at speed and it hit buildings and was destroyed by the impact and fire which followed killing all on board and others on the ground. The investigation attributed the accident to pilot failure to realise that the thrust lever of the engine with the locked out reverser was above idle, which by design then prevented both the deployment of ground spoilers and the activation of the pre-selected autobrake.

On 21 September 2012, an Aurela Boeing 737-300 lost directional control and left the paved surface when attempting to turn off the landing runway at Birmingham expeditiously to avoid the following aircraft having to go around. The Investigation noted that the range of the approaching aircraft - still 2.5nm as the incident aircraft began to clear the runway - had not been communicated and concluded that the speed of the aircraft had been inappropriate for the prevailing wet surface conditions as well as unnecessary to prevent a go around by the following aircraft.

On 23 June 2006, an AMC Airlines MD83 significantly overran the landing runway at Juba after a late touchdown followed by unexpected and un-commanded asymmetry in ground spoiler deployment and thrust reverser control caused by an unappreciated loss at some point en-route of all fluid from one of the two hydraulic systems. The Investigation concluded that the abnormal hydraulic system status should have been detectable prior to attempting a landing but also that one of the consequences of hydraulic system design should be modified.

On 16 July 2012, the left main landing gear of a Blue Islands ATR 42-300 collapsed during landing at Jersey. The aircraft stopped quickly on the runway as the left wing and propeller made ground contact. Although the crew saw no imminent danger once the aircraft had stopped, the passengers thought otherwise and perceived the need for an emergency evacuation which the sole cabin crew facilitated. The Investigation found that the fatigue failure of a side brace had initiated the gear collapse and that the origin of this was a casting discontinuity in a billet of aluminium produced to specification.

On 17 October 2011, the pilot of a Merpati DHC6 attempting to land at Dabra on a scheduled passenger flight lost control of the aircraft when several bounces were followed by the aircraft leaving the runway and hitting some banana trees before re entering the runway whereupon a ground loop was made near the end of the runway to prevent an overrun onto unfavourable terrain. The aircraft was damaged but none of the occupants were injured. The mis-managed landing was attributed to an unstabilised approach.

On 29 August 2011, an Airbus A320 which had up to that point made a stabilised auto ILS approach at destination deviated from the runway centreline below 200 feet aal but continued to a night touchdown which occurred on the edge of the 3400 metre runway and was followed by exit from the side onto soft ground before eventually coming to a stop adjacent to the runway about a third of the way along it. The subsequent investigation attributed the event to poor crew performance in reduced visibility

On 8 January 2010, an Air Berlin Boeing 737-800 attempted to commence a rolling take off at Nuremburg on a runway pre-advised as having only medium braking action. Whilst attempting to position the aircraft on the runway centreline, directional control was lost and the aircraft exited the paved surface onto soft ground at low speed before the flight crew were able to stop it. The event was attributed to the inappropriately high taxi speed onto the runway and subsequent attempt to conduct a rolling take off. Relevant Company standard operating procedures were found to be deficient.

On 16 January 2010, an Iran Air Airbus A300-600 veered off the left side of the runway after a left engine failure at low speed whilst taking off at Stockholm. The directional control difficulty was attributed partly to the lack of differential braking but also disclosed wider issues about directional control following sudden asymmetry at low speeds. The Investigation concluded that deficiencies in the type certification process had contributed to the loss of directional control. It was concluded that the engine malfunction was due to the initiation of an engine stall by damage caused by debris from a deficient repair.