On 9 January 2021, contact was lost with a Boeing 737-500 as it approached 11,000 feet less than five minutes after departing Jakarta in daylight. It was subsequently found to have entered a rapid descent whilst in unexceptional weather conditions and been destroyed by sea surface impact which killed all 62 occupants. The Investigation is ongoing but is currently focusing on finding an explanation for the apparently uncommanded but progressive asymmetric thrust reduction which culminated in a wing drop and a consequent loss of control. An initial recommendation has been made requiring effective Upset Prevention and Recovery Training.

On 9 January 2021, a Boeing 737-500 (PK-CLC) being operated by Indonesian carrier Sriwijaya Air on a scheduled domestic passenger flight from Jakarta Soekarno-Hatta to Pontianak as SJ182 made a daylight departure from Jakarta but ceased responding to ATC calls as it approached 11,000 feet soon after takeoff and subsequently descended rapidly and impacted the sea north northwest of Jakarta at high speed which resulted in the destruction of the aircraft. None of the 62 occupants survived.

An Investigation into the Accident has been commenced by the Indonesian Komite Nasional Keselamatan Transportasi (KNKT) otherwise known as the National Transportation Safety Committee (NTSC). The FDR crash-survivable memory unit (CSMU) has been recovered and useful data downloaded. The damaged CVR case has been located but it was found that it did not contain its CSMU and the underwater search for it is continuing. All relevant recorded ATC data was also available.

It has been established that the flight took off from runway 25R at Jakarta on an ABASA 2D SID and, after changing frequency to the Terminal East frequency soon after getting airborne was re-cleared to continue climb to FL290. Recorded flight data showed that the AP was engaged as the aircraft passed 1,980 feet QNH and the climb continued normally until, at 8,150 feet QNH, the left engine thrust lever began to retard relative to the right one, a difference that was reflected in the recorded N1s. A few seconds later, the flight requested a slight left turn onto a heading of 075° for weather avoidance which was approved. This approval was immediately followed by an instruction to stop climb at 11,000 feet QNH to avoid conflict with another aircraft also going to Pontianak and departing from runway 25L at Jakarta which was read back correctly. With the aircraft at about 10,600 feet, the FDR then began a left turn but it continued beyond the approved 075° as the left engine thrust lever continued to decrease whilst the right one remained at the originally set climb position.

Seven seconds after this, the flight was re-cleared to FL 130 which was again correctly read back. A few seconds after this exchange, the last radio transmission received from the flight, FDR data showed the aircraft had reached 10,900 feet, its highest recorded altitude and had begun to descend. The AP disengaged at this point and with the aircraft on a heading of 016° and an approximate 4.5° nose up pitch, it rolled left to more than 45°. As it did so, the left thrust lever position continued decreasing whilst the right one remained at climb. After a further five seconds, FDR data recorded disconnection of the A/T with the pitch angle now in excess of 10° nose down. The FDR recording stopped approximately 20 seconds later and after a further 15 seconds, the radar target of the aircraft disappeared from the controller’s radar display.

The last radar position was recorded and the controller reported this and the non response of the flight to calls made during the observed descent to their supervisor who told the operations manager. About 15 minutes after the aircraft disappeared from the radar display and after further unsuccessful attempts to make contact with the flight including on 121.5 MHz, the ATC operations manager reported the situation to the State SAR. Only 45 minutes later did ATC declare INCERFA for the flight with DETRESFA not declared for a further hour after that. The wreckage of the aircraft was subsequently found on the seabed at a depth of approximately 16 metres, about 80 metres southeast of the aircraft’s last known position. It was spread over an area of about 80 by 110 metres.

An examination of the weather conditions in the area where it appeared control had been lost was carried out and it was found that there had been “no significant development of cloud” along the aircraft flight path. 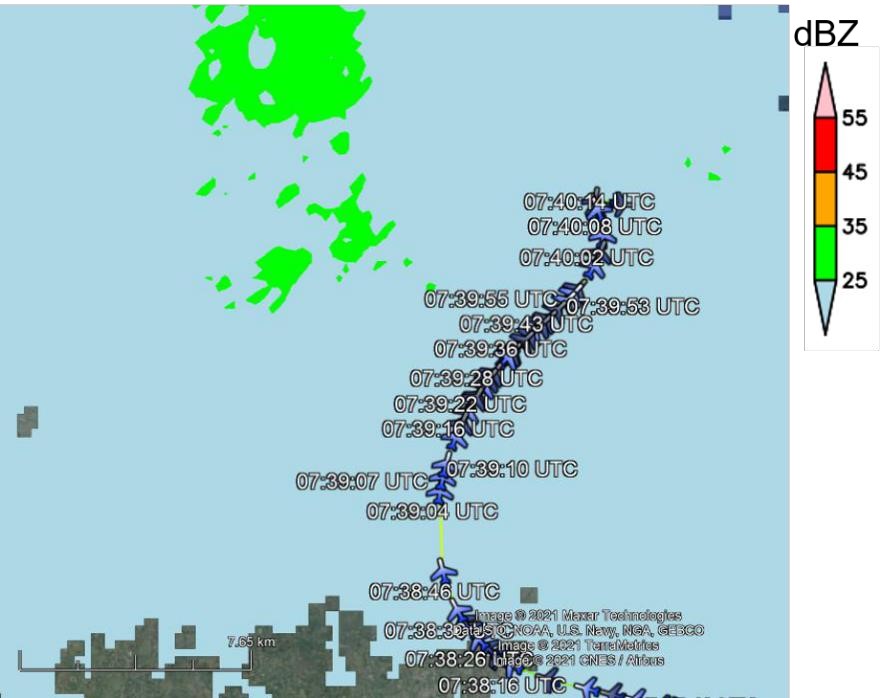 It was noted that Sriwijaya Air was exclusively a Boeing 737 operator with a fleet consisting of two 737-900ERs, thirteen 737-800s and six 737-500s including the accident aircraft. It was found that the Company OM (D) included a requirement for Upset Recovery Training to be included as part of the mandatory pilot training programme every two years. The Company FCTM (Flight Crew Training Manual) was found to refer pilots to the corresponding ICAO publications “for detailed information on the AUPRTA”.

The failure to follow the applicable emergency response procedures once the aircraft was no longer in contact was also noted.

Safety Action taken in response to the accident and communicated to the KNKT prior to finalisation of the Preliminary Report (see below) was noted to have included but not been limited to the following:

On the basis of the Findings so far and taking into account the known Safety Action summarised above, two Safety Recommendations have been issued as follows:

It was noted that the continuing Investigation will focus on but not be limited to the following:

A Preliminary Report of progress in the Investigation was released on 10 February 2021.