On 3rd December 1999, a Boeing 737-500 being operated by Maersk Air on a scheduled passenger flight from Birmingham to Copenhagen made a successful diversion to Billund in conditions of poor weather across the whole of the destination area after a go around at the intended destination but but landed with less than Final Reserve Fuel.

On 3rd December 1999, a Boeing 737-500 being operated by Maersk Air on a scheduled passenger flight from Birmingham to Copenhagen made a successful diversion to Billund after two approaches and an earlier unsucessful one at the intended destination but landed with less than Final Reserve Fuel having declared an emergency on that account. Windshear warnings during the second aproach were ignored because of the low fuel status.

The following extracts are taken from the official report of the Investigation carried out by the Danish AAIB:

"The flight was scheduled from Birmingham (EGBB) to Copenhagen (EKCH) with a scheduled time of departure at 1600 hrs, and a scheduled time of arrival at 1800 hrs. When the flight arrived at Copenhagen TMA, the crew were informed that they should expect a delay of approximately 10 minutes before they could start arrival from point ‘LUGAS’. The crew received an expected approach time of 1732 hrs. The aircraft entered the holding pattern at reporting point ‘LUGAS’ at 1722 hrs. A new expected approach time (1743 hrs) was issued at 1734 hrs. The flight was cleared for the Standard Terminal Arrival Route, STAR, at 1737 hrs and the approach was initiated to runway 22 left. The flight was on approach at 3000 feet at 1804 hrs. During the approach the weather got worse with wind gusts up to 70 kts. On short final the crew made a go-around at 1808 hrs. As the wind information for the destination alternate aerodrome, Malmo was missing the crew decided to divert to Billund (EKBI). During the approach to Billund runway 27 the weather got worse and on the final approach the crew received a ‘cockpit wind shear warning’. Consequently, the crew made a go-around at 1853 hrs. The crew advised Billund ATC that they had to declare an emergency, as the expected remaining fuel during the following approach would be less than the Final Reserve Fuel. On the second approach to Billund the crew had to disregard wind shear warnings. The aircraft landed without any further incidents at 1911 hrs."

The report concluded that:

"The flight was planned within the operational limitations and extra fuel was uplifted. During the flight, unforecasted and deteriorating weather conditions developed with wind gusts above 90 kts in some areas leading to the closing of airports and the destruction of ground installations. The information concerning closed airports and unavailable ground installations was not passed on to the crew immediately, but was given after the go-around was performed and when a diversion was imminent. The late information to the crew about the availability of airports, reduced the ability to reach alternate airports until only one airport was possible to reach. During the second approach and when landing at the only airport available, the crew had to disregard wind-shear warnings, such as fluctuating airspeed and severe turbulence due to a limited amount of remaining fuel. Significant information regarding destroyed ground installations and closed airports is considered information concerning flight safety, even for flights that are in transit. Aircraft within the Copenhagen FIR do not have any formalised means to obtain this kind of information without delay, except for the cases where the crew ask ATC a specific question, or in case ATC is aware of the intentions of the crew."

and noted the following factors: 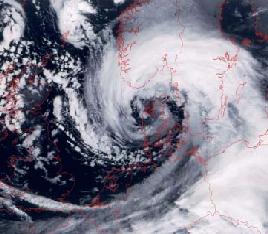