This is an extract from the bulletin on the serious incident (Bulletin: 6/2008) published by the Aircraft Accident Investigation Branch (AAIB), UK:

[After landing at London Heathrow (LHR), and] during the turnround, the pilots carried out a ‘fast realignment’ procedure for the two Inertial Reference Systems (IRSs)*, which required a ground position to be entered. This was done by the co-pilot on the Flight Management Computer (FMC) Control Display Unit (CDU) using the commercial chart Stand 114 position as the reference. However, although the value of the co-ordinates entered was correct, the longitude was entered as East instead of West. The longitude co-ordinate was thus entered […] 33.5 nm to the east of the actual aircraft position.

[…] The co‑pilot was the handling pilot. Immediately after takeoff, at 1009 hrs, the pilots noticed that there was almost no information on their EHSIs and EADIs; they described the displays as ‘blank’ [See Figure 1]. 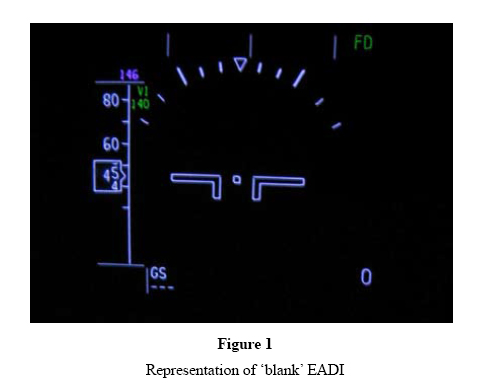 Approximately 40 seconds after takeoff, the aircraft entered cloud at around 1,500 ft aal and the co-pilot had no option but to fly using the standby attitude indicator and standby compass for attitude and heading reference; the airspeed and altitude indications were unaffected. The autopilots were not available but autothrottle remained available and in use.

As the aircraft climbed through an altitude of 3,000 ft, the commander contacted London Terminal Control North East (TCNE) Departures […] and advised that the aircraft had a ‘navigation problem’.

The controller now advised [the crew] that he would give radar vectors until visual contact with the runway was established. He issued ‘start and stop’ turn instructions and a further descent clearance. […] the commander reported “RUNWAY IS THE GROUND IN SIGHT” and was cleared for a visual approach to Runway, 09L. However, the controller noticed that the aircraft continued to track to the south of the airfield and asked the commander to confirm that they were approaching Runway 09L. The commander replied it was not in sight and, a moment later, that he was now visual for Runway 09L. […] the controller issued a landing clearance for Runway 09L. In the meantime, the ATC Ground Supervisor became concerned that the aircraft appeared as though it might be landing on Runway 09R, and asked for the traffic to be cleared from the runway. […] the aircraft landed on Runway 09L and taxied to a parking stand.

In Difficulties experienced by the pilots section, the Bulletin states:

The pilots appeared confused by what had occurred and had to fly the aircraft in IMC using only the standby instruments for heading and attitude reference. Pilots of modern EFIS equipped aircraft do not routinely fly their aircraft using a basic instrument presentation and without a map display. When suddenly presented with such a situation, pilots will need time to adapt their instrument scan and a higher level of crew co-ordination to enable them to conduct a safe instrument approach.

The commander also had some difficulty with comprehending and communicating with ATC. At the time, his workload was high and he was under stress, both factors which would have contributed to his problem.

When the co-pilot realised that the normal heading and attitude references were not available, he quickly reverted to using the standby instruments. The commander decided that the co-pilot should continue to fly the aircraft to allow himself extra capacity to manage the failure. After takeoff, with the aircraft in a climbing attitude and about to enter cloud, visual references would have been limited. The standby attitude instrument is small and located on the left side of the flight deck, making it difficult to use from the co-pilot’s side. The heading reference was obtained from the standby compass, an instrument which is relatively easy to read in straight and level flight but difficult in turns. To turn onto a specific heading it is generally necessary to use a timed turn technique. Furthermore, because the compass card is vertically mounted, the direction of turn is often misinterpreted. This was demonstrated when, for the first few heading instructions from ATC, the aircraft turned in the opposite direction. In contrast, the normal instruments were available for altitude and speed, and instructions relating to these were complied with throughout.

During the flight the pilots continued to have difficulty in complying with heading instructions and were not able to fly the aircraft to intercept the ILS course to Runway 09L. To attempt an intercept with the navigation system in this degraded configuration, without direct heading reference, would require a high level of crew co-ordination. In fact, because of the non‑compliance with the heading instructions, the aircraft crossed the ILS course at 90°, which would have made the task of intercepting it almost impossible. The pilots had little idea of their position and, after a few minutes, they were entirely dependent on ATC for their navigation. ILS DME range information was available but the pilots were offered no information from ATC, other than track miles to run, about their geographical location. It would have helped their situational awareness if their location relative to the airport and updated weather information had been given to them.

[…] The departure controller at LHR already had a high workload at the time this incident started and the declared ‘navigation problem’ was more severe than he anticipated. He stated afterwards that, if the pilot had said there was an ‘instrument problem’, then his own response might have been different. Furthermore, the aircraft did not declare a MAYDAY, even when asked specifically if there were any other problems.

[…] While the aircraft was being vectored, it was getting nearer to the airport and was descending, under ATC instructions, without following any recognised procedure. This was an undesirable situation and was only resolved because visual contact was established by the pilots. The situation arose because ATC did not initially understand the nature of the aircraft’s problem; this was compounded by the difficulty of obtaining information from the pilots because of their limited command of English. The commander did not declare a MAYDAY, so the aircraft was not treated as an ‘emergency’ aircraft. However, it should have been possible for ATC to have recognised earlier that the aircraft was not able to comply with instructions, even if the pilots appeared to think otherwise, and to have treated it as though a MAYDAY had been declared.

A fairly simple error in the pre-flight procedure of entering the aircraft’s position into the IRS went undetected and led to a serious incident. Better cross-checking procedures, either when initially entering data or by conducting a check of the entered route against that displayed on the map, would have prevented the situation from developing.

This incident demonstrates how reliant pilots may become upon the FMS, and how essential it is to ensure that the system is provided with accurate data.

Because these actions have already been initiated by the organisations concerned, no Safety recommendations are made.

Notes of the SKYbrary editor:

*The IRSs provide attitude, heading, acceleration, vertical speed, ground speed, track, present position and wind data to the aircraft systems. For the incident aircraft, the IRSs are the only source of attitude and heading information, with the exception of the standby instruments.