On 5 April 2019, a Boeing 737-500 crew declared an emergency shortly after departing Madrid Barajas after problems maintaining normal lateral, vertical or airspeed control of their aircraft in IMC. After two failed attempts at ILS approaches in unexceptional weather conditions, the flight was successfully landed at a nearby military airbase. The Investigation found that a malfunction which probably prevented use of the Captain’s autopilot found before departure was not documented until after the flight but could not find a technical explanation for inability to control the aircraft manually given that dispatch without either autopilot working is permitted.

On 5 April 2019, a Boeing 737-500 (LY-KLJ) being operated by Klasjet on an international passenger charter flight from Madrid to Kaunas, Lithuania as KLJ125 had made a daylight takeoff from Madrid when, having entered IMC, it requested an immediate return, declaring an emergency for reasons which crew lack of language competence prevented being communicated. ATC observed the aircraft’s extremely erratic flightpath on radar and twice attempted to vector it onto a stable ILS approach but both were discontinued and it was then successfully diverted by ATC to a nearby military airbase.

After becoming aware of the event four days after it had occurred, the Spanish Commission for the Investigation of Accidents and Incidents (CIAIAC), after initial inquiries, opened an Investigation. Both the CVR and FDR were removed from the aircraft and downloaded but although the FDR data was of value, it was found that the event flight had not been recorded on the CVR for reasons that could not be determined.

A fault with the Captain’s airspeed cursor for which a warning flag was displayed on the corresponding EADI was found during the crew pre-flight checks. The MEL was checked and it was confirmed that dispatch with this fault was allowable and that raising an ADD would permit rectification to be deferred for up to three days. The Captain therefore decided to proceed with the planned flight but no defect entry was made which meant that dispatch under an ADD concession was not possible.

A flap 5 takeoff from runway 14L with instructions to fly a RBO1U SID was subsequently made. It was not established with certainty which pilot was acting as PF but it was noted that it may well have been the First Officer since the flight departed having been set up for use of the First Officer’s AP and FD. It was also noted that if the Captain, given his training status on type, had considered that the left side EADI air speed cursor fault/flag (of which he was aware but had not recorded) may have been caused by an FCC (Flight Control Computer) fault on his side, he may have decided it would be a good idea not to use his AP during the flight and in any event, no attempts to engage the Captain’s ‘A’ AP (or FD, which is independent of the same side AP) were recorded at any time during the flight. However, at about 1,600 feet, an attempt to engage the First Officer’s ‘B’ AP in COMMAND mode lasting 8 seconds was recorded although thereafter there were no further such attempts.

FDR data showed that very soon in the climb - around about the time the aircraft was likely to have entered cloud and would have begun to encounter relatively minor turbulence, above 2000 feet aal - the flight path became erratic in pitch with correspondingly erratic altitude and speed variations, especially so during turns. Soon after this instability began, ATC received a declaration of emergency and a request to return. However, the nature of the problem was not stated and it quickly became apparent that although both pilots held level 4 English Language endorsements, their spoken language skills were not sufficient for non-routine communications.

The flight was transferred to APP and, after the controller had broken off two other aircraft from an ILS approach to runway 18R, the flight was cleared to join the 18R LOC. The 737 did not reduce its speed properly and crossed through the LOC of both 18R and 18L at 250 knots as it passed behind a third aircraft. In an attempt to assist, the controller then issued a closing heading for the 18L LOC instead but the aircraft did not establish on this LOC either and was observed to commence a go around.

The APP controller asked if the crew had problems with speed control but the response was a request for radar vectors to position for another ILS approach. The controller noted that because of its position and intention, the aircraft would need to climb to maintain MSA which on the projected track would soon change from 4,400 feet to 6,700 feet. The aircraft then turned onto a heading of 220º at a speed of 220 KCAS and took up a closing heading for the 18L LOC behind the second of two aircraft on the 18R LOC, intercepting it at a range of 11 nm at 4,300 feet. With 8 nm to run, the speed had reduced from 170 KCAS to 150 KCAS but the crew were understood not to be visual with the runway when it was transferred to TWR as it approached 4 nm.

At a distance of 2½ nm, the aircraft was observed on radar to change from the 18L LOC to the 18R LOC and soon afterwards it "became apparent that it had gone around again”. It was decided that, for the safety of other traffic, the emergency aircraft would be diverted by air traffic control to the Getafe Air Base. It subsequently landed there on the 2,477 metre-long runway 23 some twenty minutes later without any further problems except continuing poor English language communication skills when talking to ATC.

After shutdown, the Captain made a series of defect entries in the Aircraft Technical Log - the airspeed cursor flag which had not been entered before the flight, both APs inoperative and indicated failure of both the speed trim (stabiliser) and mach trim (elevator). It was noted that both of these trim systems require at least one of the two Flight Control Computers (FCC) to be operative and so were likely to have been secondary failures.

From further entries in the aircraft Technical Log, it was found that these recorded defects were addressed as follows:

The aircraft was then ferried from Getafe to Vilnius and, on 24 April 2019, a comprehensive troubleshooting was performed that involved checking the entire cabling installation in the area of FCC “A”. BITE was also used to run a test of the whole Digital Flight Control System (DFCS) and in particular the sensor values. This test showed that the hydraulic pressure switch for actuator “A” on the elevator was in the wrong position and both the actuator and the pressure switch were replaced. The elevator hydraulic pressure switch on the AP was also checked and the system tested, with no fault found. Following all these actions, the AP ‘A’ ADD was cleared. However, a subsequent flight test was affected by a transitory interruption to power for the left EADI and when it was restored, the AP, FD and A/T disconnected and the yaw damper remained off. Further troubleshooting was followed by replacement of the left Symbol Generator (SG) and a series of relays as per AMM guidance. After this, the AC generation system test was run and no fault was detected and following replacement of both IRUs as per Boeing’s recommendation, a further check flight was carried out with no faults found.

It was evident from this that the defect rectification work had confirmed the existence of a significant fault with the Captain’s automatic flight control system but also that despite the defect entry stating that the First Officer’s AP had also been inoperative, it was found to be functioning normally after the investigated flight and no other faults found which would have affected normal flight control by automatic or manual means from the right seat position. Notwithstanding this, the Investigation also concluded that “the problems maintaining the basic flight parameters due to the absence of automatic control systems indicates that neither the decision making nor the cooperation between the crew were adequate”. It was also reiterated that even if both APs had been inoperative, the fact that it should be possible to fly the aircraft normally in any flight weather conditions without use of an autopilot was confirmed by the absence of any restriction on despatch with both APs inoperative except for CAT II approaches or use of any autoland capability. 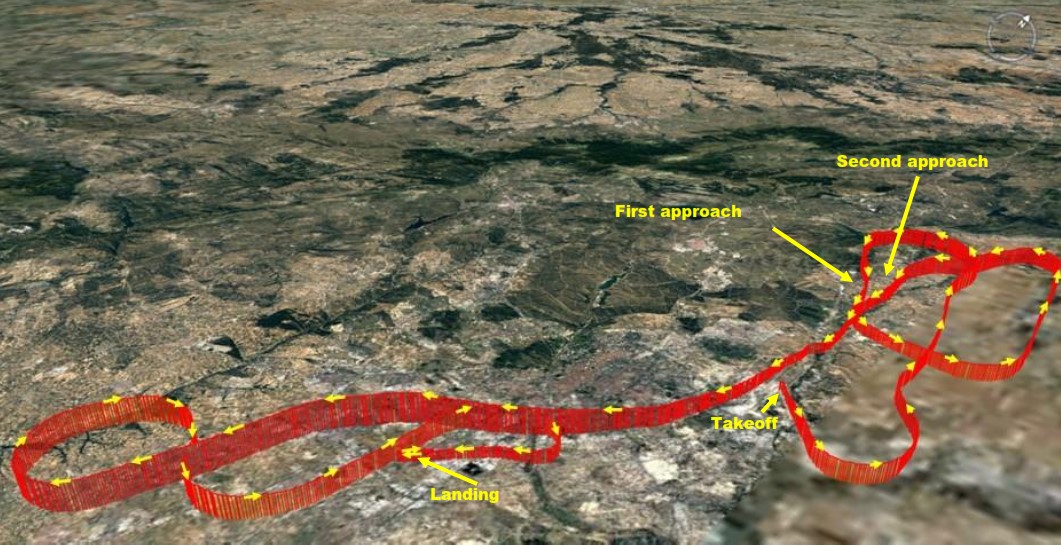 A depiction of the complete flight path based on FDR data. [Reproduced from the Official Report]

The Cause of the event was determined as “the problems the crew had operating the aircraft in instrument flight conditions after losing both of the aircraft’s automatic flight systems”.

It was noted that no Safety Recommendations were being made as a result of the Investigation because “all findings which could be the subject of a safety recommendation were already noted by the Operator in its report on the event” - although no information on any of the content of this internal report was provided.

The Final Report of the Investigation was approved on 26 February 2020 and subsequently published in both English translation and in the definitive Spanish version on 2 July 2020.