On 5 June 2015, a Boeing 737-600 landed long on a wet runway at Montréal and the crew then misjudged their intentionally-delayed deceleration because of an instruction to clear the relatively long runway at its far end and were then unable to avoid an overrun. The Investigation concluded that use of available deceleration devices had been inappropriate and that deceleration as quickly as possible to normal taxi speed before maintaining this to the intended runway exit was a universally preferable strategy. It was concluded that viscous hydroplaning had probably reduced the effectiveness of maximum braking as the runway end approached.

On 5 June 2015, a Boeing 737-600 (C-GWCT) being operated by WestJet on a scheduled domestic passenger flight from Toronto to Montréal as WJA 588 touched down off a day VMC ILS approach at destination beyond the normal position and failed to stop before reaching the end of the runway. It came to a stop on grass approximately 60 metres further on but was undamaged and none of the 112 occupants were injured. 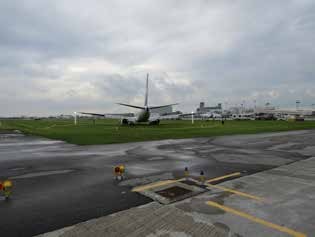 The aircraft in its final stopping position. [reproduced from the Official Report]

An Investigation was carried out by the Canadian TSB. Relevant data was successfully recovered from both the FDR and the 2 hour CVR. The CB of the latter was tripped after the aircraft had stopped.

It was found that the Captain, who was PF for the investigated flight, had been promoted to command just over a year previously after seven years as a First Officer on type and had accumulated 9,000 total flying hours including 7,500 hours on type. The First Officer had gained his 737 type rating 4½ years previously and had accumulated 13,898 flying hours including 3,360 hours on type. The accident flight was the crew's first flight of the day.

It was established that the ATIS obtained during descent gave benign weather with runway 24L and 24R in use for landing. While being vectored for what was initially planned to be a visual approach to 24L "with the ILS as a backup", the crew observed indications of moderate to heavy rain to the north-northwest of the field, which once on left base showed that there was heavy rain on the approach. The aircraft was configured for a Flap 30 landing with autobrake 1 set since runway exit at the end of the 2,926 metre-long runway was expected and the Vref was 125 KIAS. Once on final and in heavy rain with the wipers on, TWR gave a landing clearance and a spot wind of 350° at 17-22 knots. FDR data showed that at this time, the ILS was selected with the AP engaged and the A/T was engaged in 'Speed' mode with the initially-selected 130 KIAS subsequently increased to 140 KIAS as the aircraft descended through 740 feet agl.

The AP was disengaged passing approximately 280 feet agl after which the aircraft began to deviate slightly above the ILS GS. FDR data showed that it crossed the runway threshold at 52 feet agl at a speed of 145 KCAS and with a brief bounce touched down on the wet - but not contaminated - runway 10 seconds later about 780 metres beyond the threshold at a speed of 133 KCAS. Speedbrakes deployed, the autobrakes activated and the thrust levers were brought to reverse idle. With the speed at 103 KCAS and with 1500 metres of runway remaining, the PF manually stowed the speedbrakes, which disarmed the autobrakes. Nine seconds later with the speed at 92 KCAS, he began manual braking with just over 1,000 metres of runway remaining and then, with just under 700 metres of runway remaining, this was increased to maximum brake pressure and maximum reverse thrust was selected. From that point, an overrun was anticipated and the aircraft was steered to the right of the runway centreline to proactively avoid the runway end lights and the approach lighting system for the opposite runway direction. As the speed reduced through 55 knots KCAS there were just under 170 metres of runway remaining and with a speed of approximately 39 knots KCAS, the aircraft departed the paved surface of the runway and continued for 60 metres into the grass before coming to a stop to the right of the extended runway centreline. The ARFF arrived within 2 minutes of leaving their base, approximately 3 minutes after the aircraft had come to a stop. None of the occupants were injured and a mobile staircase positioned at door 1R was eventually used to get everyone off the aircraft and they were bussed to the terminal building. An annotated illustration if the landing sequence is shown below. 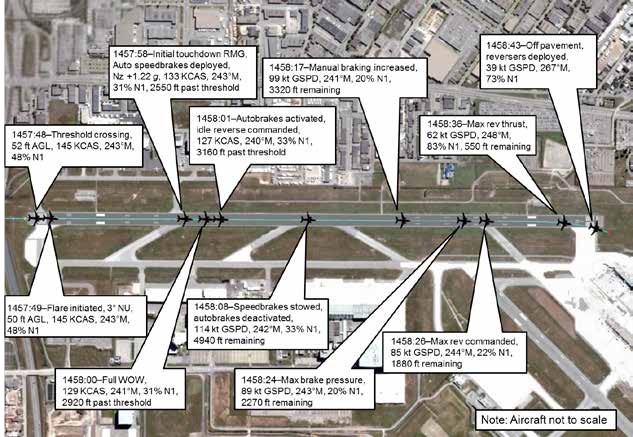 It was apparent that the WestJet criteria for a stabilised approach had been met. However, aided by an incorrectly calculated 'target speed', the aircraft had crossed the runway threshold 15 knots faster than recommended. The effects of this were aggravated by the failure of the crew to react to the tailwind component implicit in the final wind check received from ATC and a "slightly high flare", and combined effect of these factors was that the aircraft touched down beyond the TDZ. Whilst WestJet's "normal procedures" require that a go around should be flown if a landing cannot be made within the TDZ, it was noted that no guidance is provided on how to determine this prior to touchdown and there is no way a crew can determine by external visual reference whether they have touched down beyond the TDZ or are about to. The Investigation concluded that "it is likely that the crew were unaware of how far beyond the touchdown zone the aircraft was" as it touched down.

It was concluded that there was no evidence to suggest that standing water had introduced a risk of dynamic hydroplaning/aquaplaning but the lack of deceleration once maximum manual braking was applied near the end of the runway suggested that viscous hydroplaning/aquaplaning may have occurred at that point. A review of the means of deceleration available as used was made:

It was noted that the runway involved did not have centreline lighting, which had it been installed would have changed from white to alternating white/red at 914 metres from the end and to all red at 305 metres from the end. The runway was not equipped with distance-remaining signage but neither was this required under State Regulations or to meet ICAO standards. It did have a Runway Strip which extended 60 metres beyond the end of the runway and a RESA which was 240 metres long and 152 metres wide, both of which satisfied ICAO Standards.

Meteorological data indicated that at the time of the overrun, the rainfall rate was within the range described as heavy rain intensity. However, both the transverse profile and the surface of the runway involved were such as to promote rapid drainage and the best possible braking action during such episodes, although the concrete runway surface was 'wire combed' rather than 'grooved'. Runway friction levels were measured after the overrun and found to be above the applicable regulatory Maintenance Planning Level.

Overall, it was concluded that even if heavy rain is occurring, it will not automatically prompt a crew to anticipate poor braking, because in the absence of reports of standing water, a wet runway with an adequately drained surface is generally expected to provide good braking action. The Canadian 'Airman's Information Manual' was noted to include the statement that "the well-drained runways at most major Canadian airports seldom allow pooling of sufficient water for hydroplaning to occur". So the crew’s initial plan for the arrival - using autobrake setting 1 and thrust reversers to provide minimal deceleration - was consistent with this guidance. However, it was noted that after an analysis of landing performance in a number of runway overrun events in the USA, the FAA had concluded that the widely accepted assumption that a wet runway will allow good braking action may not be completely valid. The Administration had therefore warned operators that "30% to 40% of additional stopping distance may be required on runways that are wet but not flooded". This suggested that Operators “should be more conservative when making landing distance assessments in situations where moderate or heavy precipitation is occurring on non-grooved or non-porous friction course (PFC) runways" such as the one in this case and prompt their crews to anticipate less-than-good braking conditions on wet runways in such conditions.

Finally, it was noted that "flight data monitoring conducted by WestJet following the occurrence suggests that non-standard use of deceleration devices is more prevalent on runways where aircraft are typically instructed to exit at the end of the runway". This suggests that in these cases, pilots may be inclined to maintain speed and decelerate at the end of the runway rather than decelerating normally through the early application of all available deceleration devices and then taxiing the aircraft to the end-of-runway exit at a normal taxi speed. It was concluded that if pilots limit the use of deceleration devices to expedite an exit at the end of a runway, whether as a preference or because of an explicit instruction to do so, then the risk that the landing will result in a runway overrun is liable to be increased.

Two Other Findings were also formally documented as follows:

Safety Action taken by WestJet during the course of the Investigation was noted as having included the addition of wet runway landings to recurrent simulator sessions and more attention to the subject of safe landings during pilots' recurrent classroom training.

The Final Report of the Investigation was authorised for release on 29 March 2017 and it was officially released on 16 May 2017. No Safety Recommendations were made.