On 5 November 2011, ATC cleared a Virgin Australia Boeing 737-700 to climb without speed restriction through an active parachute Drop Zone contrary to prevailing ATC procedures. As a result, prescribed separation from the drop zone was not maintained, but an avoiding action turn initiated by the 737 crew in VMC upon recognising the conflict eliminated any actual risk of collision with either the drop aircraft or its already-departed free-fall parachutists. The incident was attributed to a combination of inadequate controller training and inadequate ATC operational procedures.

On 5 November 2011, in day Visual Meteorological Conditions (VMC), a Boeing 737-700 (VH-VBP) being operated by Virgin Australia on a scheduled passenger flight from Sydney to Cairns and climbing lost separation from an active Drop Zone where a Casa 212 (VH-MQD)being operated on contract to the Royal Australian Air Force by civil operator Military Support Services had just dropped parachutists from 2000 feet above the 737. Both aircraft were on a similar track with the 737 climbing below the C212 at unrestricted high speed. The closest proximity of the 737 to a (free fall) parachutist was approximately 2000 metres at the same level.

An Investigation was carried out by the Australian Transport Safety Bureau (ATSB). It was established that at the time of the loss of separation between the 737 and parachutists, which had occurred within the Drop Zone, both aircraft were operating in accordance with their respective ATC clearances. It was found that due to good in-flight visibility conditions, the 737 had been able to observe the potential conflict and had begun avoiding action prior to receiving any alert from their controlling ATC frequency. The area north west of Sydney where the conflict occurred is shown on the map below. 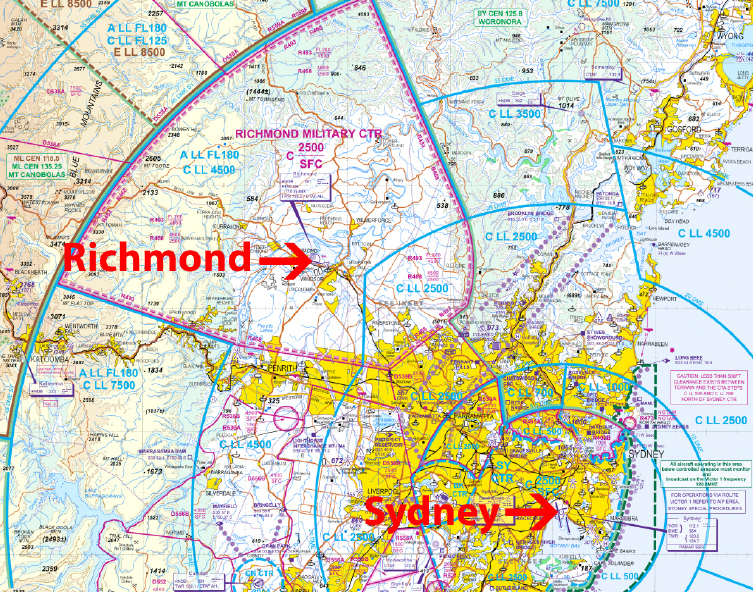 The civil ACC sector with responsibility for both aircraft when the conflict arose was aware that the C212, at 12000 feet, was ready to commence a drop but both parties were aware that a delay would follow due to an aircraft inbound to Richmond AFB, the base of the drop aircraft and which was also the centre of the 1nm diameter drop zone. However, the 737 had been issued with a SID which would take it overhead Richmond and, upon request to a trainee/OJTI pairing controlling their departure ACC frequency (adjacent to the sector where the loss of prescribed separation would subsequently occur) had had the usual 250 KIAS speed restriction below 10,000 feet within 30nm of Sydney removed whilst also being given a stop altitude of 5000 feet. These controllers were aware that the C212 was at 12000 feet in the vicinity of Richmond but unaware that it had been given a clearance to commence a drop and after failing to obtain guidance on clearance from the adjacent ACC sector working the C212, the trainee and their OJTI decided that a re-clearance of the 737 to 10,000 feet was appropriate. The OJTI stated that neither they nor their trainee were endorsed for the adjacent sector over Richmond and that “they did not have a full understanding of parachute operations at Richmond, or of the implications of these operations for their departures planning.” Although at the time of issue, the re-clearance to climb to 10,000 feet did not infringe the required separation minima of 3nm laterally or 1000 feet vertical, it was issued without any confirmation from the adjacent sector that the C212 would remain at 12000 feet or that a drop clearance from that height would not be issued.

A system-implemented handoff of the departing 737 then took place to the adjacent sector working the C212. The controller working that sector advised that they first became aware of this traffic when it was 6.7nm southeast of Richmond and realised that there were insufficient track miles to climb it over the C212. On initial contact with the new ACC sector when climbing through 9200 feet for 10000 feet on a north westerly track a groundspeed of 360 knots and just 5.3nm from the C212, the 737 crew were told to “standby”. The sector controller was trying to establish if the drop which he had already cleared but had been delayed had commenced but two-way communication was ineffective. By the time the affirmative response was received, the 737 was 3.1nm from the C212 and about to level at 10,000 feet. The clearance to drop was then cancelled but when the C212 crew responded that all parachutists had left the aircraft, the controller then issued a corresponding “traffic alert” to the 737. The crew of the latter advised that they already had the C212 in sight and had begun a right turn, although they at no time saw any parachutists. The C212 crew reported being unaware of the 737 behind until they had heard the traffic alert issued to it and had subsequently seen it once it had made the right turn below. One of the parachutists reported seeing the 737 about 2000 metres away and below and the last of the five to jump reported having passed through the same altitude as the 737 in free fall with separation estimated as 2000 metres. The diagram below illustrates the way the loss of separation occurred. 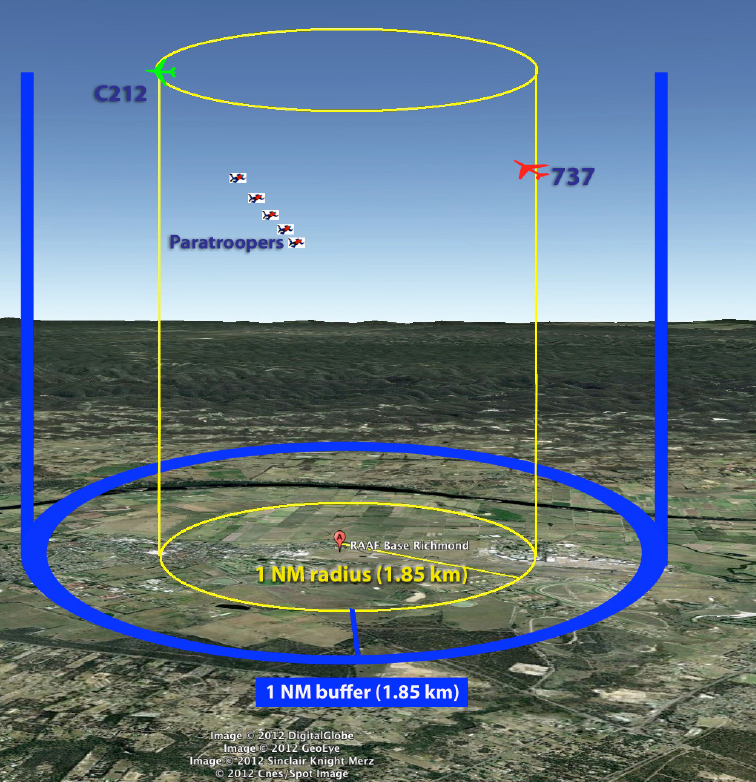 The Investigation reviewed the applicable ANSP (Airservices Australia) procedures. It was found that controller “instructions did not document any procedures to assure separation between jet aircraft departing on the Sydney-Richmond track and parachute operations at Richmond.” It was also found that although Safety Regulator CASA, through the Manual of Air Traffic Services (MATS), required that the 1nm radius drop zone for Richmond should be supplemented by a further 1nm buffer zone, “Airservices….did not consider the buffer was a requirement”. It was also found that a commitment by Airservices which had followed findings of previous investigations to ensure that en route controllers received regular training in “compromised safety recovery techniques” had not been delivered in respect of two of the three ACC controllers involved.

The Investigation identified four Contributing Factors in respect of the Incident, two of which were classified as Safety Issues to be resolved by the ANSP Airservices Australia:

It was also concluded that there had been three other factors that increased risk, all matters relating to the ANSP:

No Safety Recommendations were issued but Safety Action taken by ANSP Airservices Australia in response to the two Safety Issues identified was assessed as adequate in one case and adequate subject to completion of proposed action in the other. Additional Safety Action in respect of controller training by Airservices Australia and in respect of parachute dropping procedures by the contracted aircraft operator of the RAAF C212 were also noted.

The Final Report was published on 16 December 2013.