On 7 June 2018, a Boeing 737-800 operated by a non-Spanish speaking crew was given takeoff clearance at Alicante after the same supervised student controller had previously cleared two vehicles to begin a full-length opposite-direction runway inspection in Spanish. The controller error was only recognised when the vehicles were able to transmit that they were still on the runway, the aircraft crew being unaware of the conflict until then told to reject the takeoff. The maximum speed reached by the aircraft was 88 knots and minimum separation between the aircraft and the closest vehicle was never less than 1000 metres.

On 7 June 2018, a Boeing 737-800 (EI-FHZ) being operated by Norwegian Air International on an international passenger flight from Alicante to Oslo as IBK2WH was on its takeoff roll on runway 10 in good day visibility when ATC instructed it to stop the takeoff due to vehicles on the runway ahead. This was promptly accomplished with the aircraft reaching a maximum of 88 knots ground speed. The 3000 metre-long runway was cleared about half way along its length with separation between the oncoming vehicles never less than 1000 metres.

An Investigation was carried out by the Spanish Commission for the Investigation of Accidents and Incidents (CIAIAC). Relevant CVR data were recorded over during the subsequent flight but the QAR provided useful data and a recording of communications on the TWR frequency and relevant CCTV footage was also available.

It was noted that the Captain, a 37 year-old German national who had been PF, had a total of 8,304 flying hours, all but 203 hours had been on type and that the 30 year-old First Officer, a French national, had a total of 1,428 flying hours which included 1,008 hours on type. The 34 year-old Student Controller had recently been licensed as such and was part way through his basic training after being assigned to Alicante TWR some 2½ months previously. He had completed 96 hours of on-the-job training (OJT) and had almost completed Phase 3 of this validation training. His 40 year-old Instructor had a total of 4 years’ experience as a controller, all obtained at Alicante TWR. He had been an Instructor for just three weeks at the time of the event under investigation and it occurred on his second day as an Instructor, his first full day in that role having been the previous day with the same Student Controller. An Assistant tasked with administrative support duties was the only other person present in the control room at the time.

The Instructor and Student had taken over TWR duties half an hour prior to the event under investigation. The Instructor had decided that for a short period to begin with (which in the event turned out to be 10 minutes) traffic levels were sufficient to justify operating separate GND and TWR positions so he took GND and the Student took TWR. When the separate GND position was discontinued, the plan was that the Student would continue in the TWR position with the Instructor supervising.

During the next 20 minutes, there were 10 departing aircraft and one arriving aircraft. Two vehicles, with which communications would take place in Spanish, were also going to carry out a routine inspection of the airport’s only runway, 10/28, and made their first call to TWR shortly after the Student took over the TWR position. These vehicles were going to carry out the inspection task in tandem with one of the vehicle drivers taking responsibility for all radio communications with TWR and the other driver monitoring. They were cleared to the runway 28 holding point C9 in preparation for their inspection which would, according to the applicable procedures, take place in the opposite direction to that in use. On arriving there, they were instructed to hold position but a couple of minutes later, they were given permission to enter the runway but the frequency then became too busy for the driver to acknowledge the clearance and the vehicles therefore did not proceed. When the Student Controller asked where the vehicles were 2½ minutes later, he was told that they were still at the holding point and this time they were instructed to wait. There were two departing aircraft at the runway 10 holding point and three more starting engines on stand. 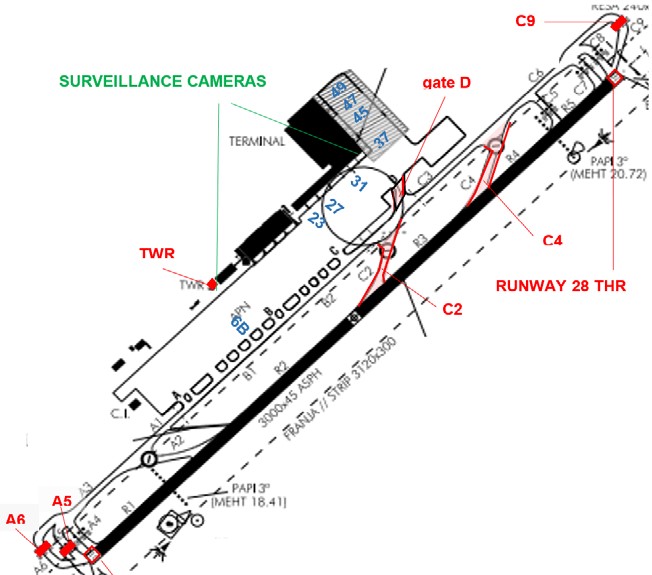 The Alicante runway with relevant annotations. [Reproduced from the Official Report]

The two aircraft waiting at the holding point were cleared for takeoff in turn and once they were clear, the vehicles were again cleared to enter the runway and this time were able to acknowledge the clearance and proceed. Twenty seconds after this, the Norwegian 737-800 was given clearance to line up and wait on runway 10 and after a further 1½ minutes was cleared for takeoff as it was about to enter the runway as previously cleared. Immediately the clearance was correctly acknowledged, the Student Controller asked the next aircraft waiting to depart if they were ready and on receiving an ‘affirmative’ response cleared it to “line up and wait behind”. By the time this had been acknowledged, it was 20 seconds since the Norwegian 737-800 had been cleared for takeoff and it had begun to roll. At the first opportunity to communicate with TWR, the vehicle driver, who had heard the takeoff clearance being given, called to remind ATC that they were on the runway - the 737 accelerating through 38 knots. Three seconds later, the Student Controller responded instructing the 737 to “reject takeoff” which was acknowledged and the OJTI then took over the position and repeated the instruction, which was again acknowledged. The illustration below shows the aircraft position as each transmission was made. The maximum speed reached as the aircraft initiated its rejected takeoff was 88 knots for two seconds and it was concluded that the crew response had been “immediate and complete”, allowing the aircraft to slow sufficiently to exit the runway at the C2 RET. 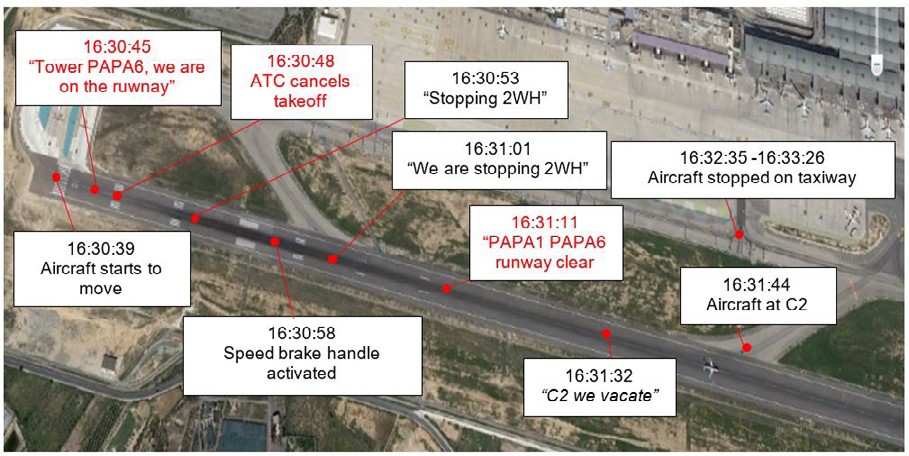 The position of aircraft during the time the conflict was identified and resolved. [Reproduced from the Official Report]

From the perspective of the two vehicles, they were driving along the runway conducting an inspection which was expected to take up to four minutes. It involved them deviating close to any FOD seen so as to, as much as possible, recover it either without getting out of the vehicle or if this was necessary, not then getting too far from it. In this way, they were able to continuously monitor the radios. Both drivers heard the takeoff clearance being given and “their reaction was immediate and similar - to vacate the runway as quickly as possible”. By the time the driver who was communicating with the TWR was able to get a response, the aircraft was 1500 metres away and accelerating quickly towards his vehicle but as the vehicle entered taxiway C2 to clear the runway, there was still 1350 metres separation from the approaching aircraft although it had not yet been instructed to reject its takeoff. As the vehicle cleared completely onto C2, the aircraft was still 1100 metres away from C2 at a speed of 86 knots and was about to begin slowing down. The vehicle which was directly communicating with TWR was the closer of the two vehicles to the aircraft throughout the episode.

The Investigation noted that although the vehicle driver had communicated with TWR entirely in Spanish as usual, this had not prevented either driver from understanding the controller’s English language takeoff clearance. On the other hand however, the controller’s use of Spanish when clearing the vehicles to enter the runway had prevented the departing aircraft crew from awareness of this and “if this instruction had been given in English, it may have made it more likely for the aircraft crew to detect the conflict and not just the vehicle drivers”. In this respect, it was noted that “there is no requirement to use English in communications between controllers and airport vehicles that are not aircraft (and) there is not even a requirement for controllers to communicate with all aircraft crews in English, since Spain decided not to apply the 2016 requirement to use only English in these communications”, a requirement that would otherwise have been applicable to Alicante because it had more than 50,000 international IFR movements per year. It was noted that this language use problem “has already been identified and decisions have been adopted” although what this remark meant was not clarified.

In seeking to understand how the Student Controller had forgotten issuing clearance for the inspection vehicles to enter the runway and then issued a conflicting takeoff clearance, it was noted that excellent visibility prevailed and that the TWR controller working position allowed “complete visibility” of the runway. According to both the Student Controller and the OJTI, the manual strip board had been correctly configured. This was considered to have presented two potential explanations for the oversight:

It was assessed that the first of these would have meant that the student had not visually scanned the full length of the runway and the second would have meant that he had not assimilated the information presented on the strip board. Radio communications showed that the takeoff clearance had been issued as the aircraft was entering the runway to line up and wait as previously cleared and it was therefore considered likely that the controller was looking at the aircraft which indicated a focus on the runway threshold rather than its full length. In respect of the strip board, it was assessed that during the line up clearance process, the Student Instructor must have had the 737 strip in his hands. He would also have had to subsequently write the takeoff time on it, which meant that “at some point his eyes must have focused on the bay and specifically on the area of the runway designator, but without taking in the information it was showing (despite the presence of the strip for the vehicles, in a conspicuous colour, immediately above)”. It was considered that the increasing workload to which the Student had been subjected after taking over as the single position TWR controller was likely to have been a relevant context for his error and that more active oversight from the OJTI may have been required. However, evidence of effective oversight during the duty was evident and it was concluded on the available evidence that his “distraction” from effective oversight which allowed the Student Controller’s clearance error to go unnoticed was collectively a consequence of:

The overall Conclusion of the Investigation in respect of the ATC aspects of the event was documented as follows:

The Cause of the event was formally documented as "the Boeing 737 aircraft was issued an incorrect takeoff clearance by the Tower when the runway was occupied by two runway and apron service vehicles that had previously been cleared to enter the runway”.

One Safety Recommendation was made as a result of the Investigation as follows: that FERRONATS, as the control tower service provider at the Alicante Airport, incorporate into its training modules for instructors, controllers and assistants, the results and findings contained in this investigation report in order to reinforce the following aspects:

For controllers, involving the checks prior to authorising the use of the runway:

For controllers, involving the need to treat vehicles and aircraft equally:

To the instructors, involving their supervision of controllers in training:

The Final Report of the Investigation was approved for release in English translation on 28 December 2018.