On 25 April 2013, the experienced pilot of an en-route motor glider which was not under power at the time and therefore not transponding observed a potentially conflicting aircraft in Class 'E' airspace near Frankfurt Hahn and commenced avoiding action. Although the glider was within their field of view, neither of the pilots of the other aircraft, a Boeing 737 in a descent, was aware of the proximity of the glider until it passed them on an almost parallel opposite-direction track 161 feet below them at a range of 350 metres as their aircraft was passing approximately 6,500 feet QNH.

On 25 April 2013, a Boeing 737-800 being operated by Ryanair on a scheduled international passenger flight from Alghero, Sardinia to Frankfurt Hahn in Class 'E' airspace in day VMC and descending towards its destination when it passed very close to a previously unseen ASH 25 motor glider on an almost parallel opposite track as it was descending through approximately 6,500 feet. The encounter was reported to ATC and it was subsequently found that the two aircraft had come within 350 metres laterally and 161 feet vertically of each other.

An Investigation was carried out by the German BFU. Relevant data from the 737 QAR and from the NVM of the Motor Glider's GPS were successfully downloaded and useful recorded radar data were available from both civil and military ATC Units. However, it was noted that although powered aircraft in Class 'E' airspace are required to have an activated transponder when flying above 5,000 feet QNH or at more than 3,500 feet agl, the motor glider involved was unpowered during the encounter and so had not been visible to ATS units as a secondary radar target.

The motor glider, which had the pilot's wife on board, was found to be on a triangular flight with Marpingen being the aerodrome of departure and arrival. Its pilot stated that the glider had been tracking south southwest in an almost cloudless sky with only slight haze domes at 7,000 feet QNH. In-flight visibility had been about 30 km and without the engine running, airspeed had been around 60 knots. At about 6,500 feet QNH, the glider's TRX 1090 ADS-B Traffic Receiver had generated a collision warning for traffic at the same altitude. A transport aircraft with its landing lights on was visually acquired ahead and to the left a range of about 10 km away and at the same altitude. As avoidance action, he had made a left turn with a bank angle of about 45° so as to fly approximately south in the opposite direction to and to the left of the transport aircraft - see the illustration below. His aircraft had been in gliding flight with a sink rate of about 160 fpm. He stated that he had "decided to fly a parallel opposite course to the other aircraft so that he could continuously observe it and react to possible heading or altitude changes if need be". He saw that the other aircraft was a 737 and that it appeared to be maintaining heading and altitude with no avoidance manoeuvre seen. After about a minute, he estimated that the 737 had passed about 165 feet above his aircraft when approximately 150 metres apart laterally. He had noticed that "only at the last moment, while the two aircraft were passing each other, had the 737 Co-pilot turned his head to the right". He had then resumed his original track. 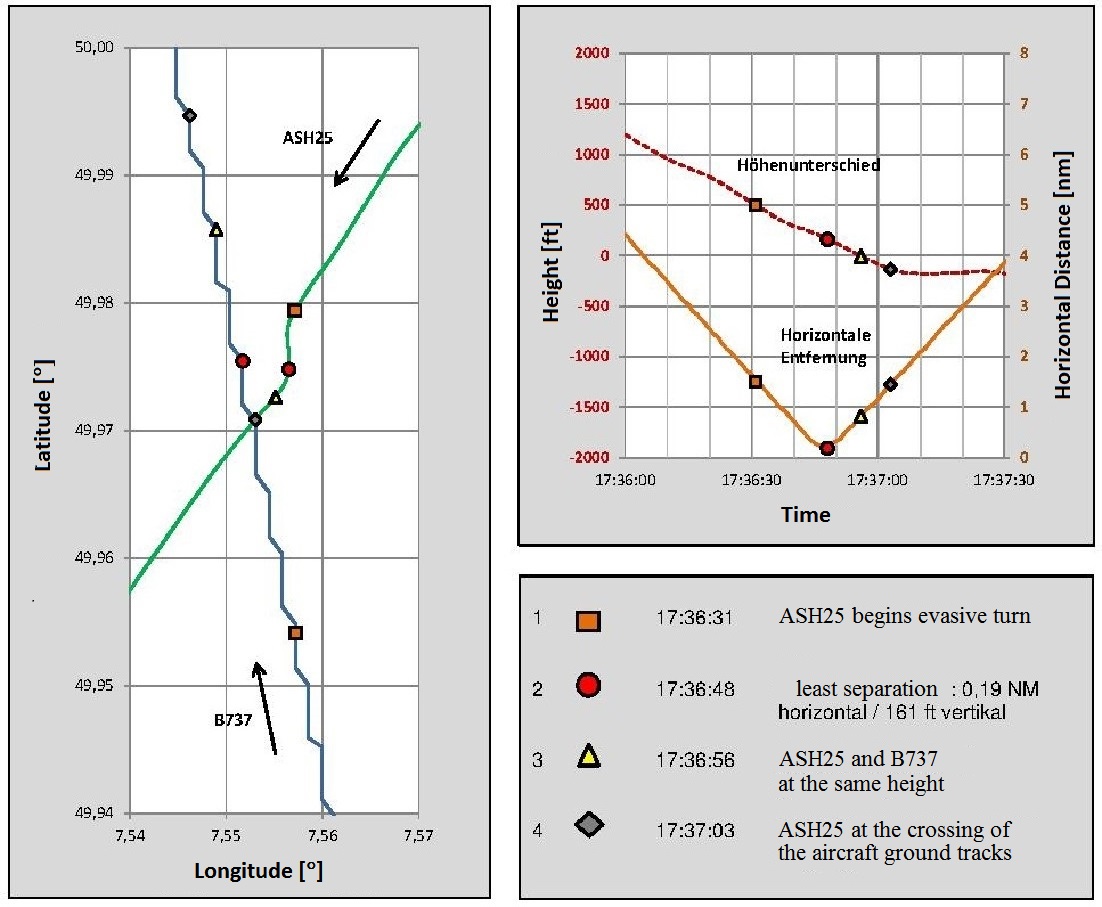 The 737 had been under radar control and was being positioned to the runway 21 ILS approach at Hahn and flying at 250KIAS. Its crew reported that only the First Officer had seen the glider and then only as it passed close to their aircraft in the opposite direction and slightly below.

The closest point of approach was calculated using data from the 737 QAR and the motor glider's GPS and put the motor glider 350 metres east of the 737 and 161 feet below it.

The Investigation noted that:

It was concluded that the decision of the motor glider pilot to remain on an opposite course was correct due to the difference in aircraft speeds and also that although ATC could not give a definitive warning of conflict when they had only intermittent primary returns, a general traffic warning about possible glider traffic with direction information might have supported the 737 crew in visually acquiring the motor glider earlier.

It was also noted that by resuming its original tracking soon after passing the 737, the motor glider had crossed the flight track of the 737 just 19 seconds later about 300 feet below its altitude at that time. Since wake vortexes from the 737 could be expected to descend at between 300 and 800 fpm, the motor glider was at that point in the immediate vicinity of the 737 wake vortex and "had it flown into it, the worst case scenario would have been a (loss of control) crash".

The Causes of the Accident were formally documented as follows:

The Final Report was completed on 26 February 2016 and published in September 2016.