On 7 June 2013, stabiliser trim control cable, pulley and drum damage were discovered on a Boeing 737-800 undergoing scheduled maintenance at Auckland. The Investigation found the damage to have been due to a rag which was found trapped in the forward cable drum windings and concluded that the integrity of the system which provided for stabiliser trim system manual control by pilots had been compromised over an extended period. The rag was traced to a specific Australian maintenance facility which was run by the Operator's parent company and which was the only user of the particular type of rag.

On 7 June 2013, a Boeing 737-800 (ZK-ZQG) being operated by Jetconnect and undergoing scheduled maintenance at Auckland was found to have unexplained damage to its stabiliser trim control system which did not appear to be of recent origin and was in a compartment accessible only to maintenance personnel. The cause of the damage was found to be FOD.

The event was investigated by the Transport Accident Investigation Commission (TAIC).

During a routine overnight inspection of the aircraft, a maintenance engineer making a routine visual inspection of the forward Electronics and Equipment (E & E) compartment located under the flight deck "discovered metal filings adjacent to the forward cable drum of the stabiliser trim system". On closer inspection, damage to the cable guides on the drum was evident and a bulge in one area of the cable as it wound onto the drum was found. The cause of this bulge was found to be a rag trapped under the cable (see the first illustration below). It was found that the presence of the rag had forced the cable windings to bulge outwards into contact with the aluminium cable guides, which had damaged them and created the metal filings initially found. It was then found that "in places the stainless steel cables had worn right through the aluminium spacer and had started to wear through the harder steel bolts that held the guide spacers in place” (see the second illustration below). Examination of the stainless steel trim cables themselves found that they too had begun to wear as a result. The distortion caused to the cable run was found to have increased the tension on the cable sufficiently to damage the cable pulleys that were located between the forward and rear cable drums. All the damaged parts were replaced prior to release to service. 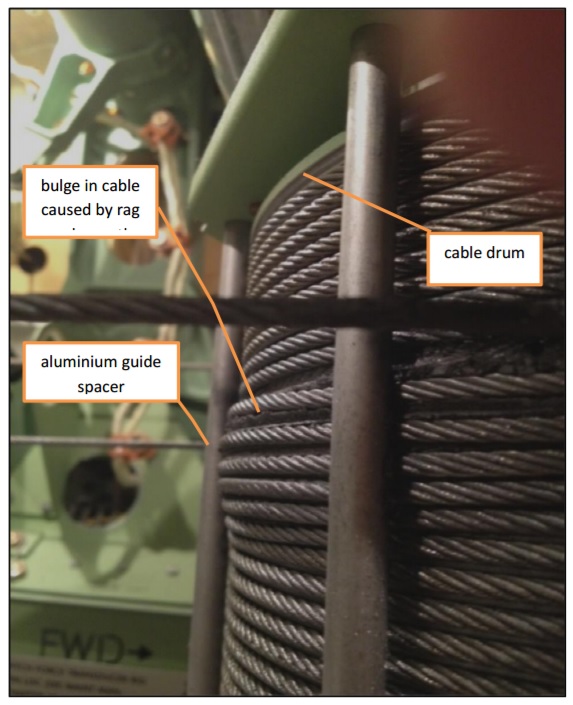 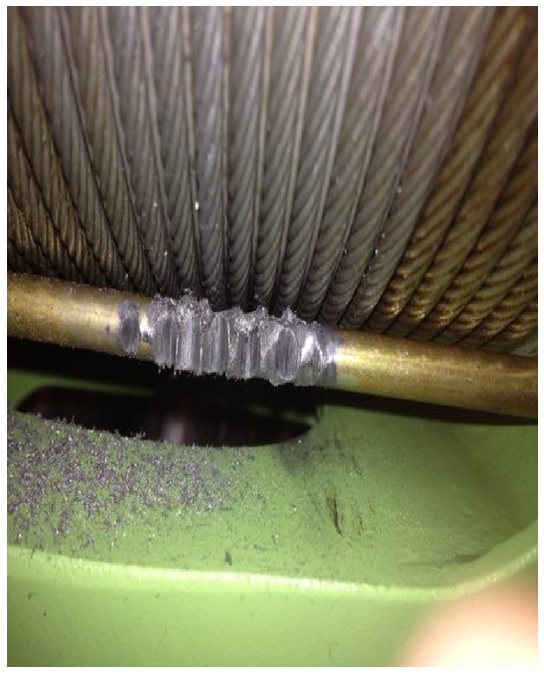 It was noted that the flight control and stabiliser trim systems on the aircraft type "had remained largely unchanged from the original BOEING 737-700 models designed in the early 1960s and the Classic models introduced in the 1980s". It was found that the aircraft involved had flown 7,223 hours and 2,352 cycles since delivery almost exactly two years prior to the discovery of the damage to Qantas, of which Jetconnect was a New Zealand-based subsidiary. It had been in operation with Jetconnect throughout that time.

Although unlikely, the Investigation considered that "there was the potential for the stabiliser trim system manual control to become jammed or at worst disabled if a cable severed". However, it was accepted that the alternative method of trim system control which moved the stabiliser directly through a gearbox and clutch using electric motor actuation would still have operated in response to commands from the independent electric switches on the pilots’ control columns, but the trim position indicator on the flight deck would have been inoperative since it derives its indication from the manual control cable.

The retrieved rag was subjected to detailed examination and comparison with rags in use both at build and at the maintenance locations where E & E compartment access would have occurred since delivery. The only maintenance location which the aircraft had been at where rags of the type found were used was the Qantas Sydney facility.

Three months after the event under investigation had occurred, the Investigation was informed of a related finding after the arrival of another Jetconnect B737-800 (ZK-ZQC) in Wellington on 11 September 2013. In this case, following a crew defect report of being unable to lock the right main landing gear in the up position, a rag had been found wrapped around the right main landing gear uplock assembly. The aircraft landing gear had been under maintenance at Qantas' Melbourne maintenance facility. The report of the local investigation by Qantas and Jetconnect found that "the rag had been used by an engineer to protect against an accidental head strike on the uplock during a maintenance task in the right main wheel well area".

It was noted that despite all the usual inspection procedures being in place at both Qantas maintenance facilities "in both cases a rag left inside the aircraft caused a safety issue with a system that was critical for flight".

The formally-stated Findings of the Investigation were that:

No relevant Safety Actions by the involved parties were reported to the Investigation.

The Final Report of the Investigation was approved for publication in February 2015 and subsequently published on 26 March 2015. No Safety Recommendations were made.