On 8 September 2020, an airport maintenance team driving at night on the centreline of the active runway at Birmingham were unaware that an inadequately secured 2 metre-long ladder had fallen from their pickup truck. Three aircraft then landed in the following half hour narrowly missing the ladder before it was discovered and the runway closed. The Investigation found that a more suitable alternative vehicle was available and that the completely inadequate method used to secure the ladder in their vehicle had failed to restrain it when the vehicle accelerated after passing the aiming point markings in the touchdown zone.

On 8 September 2020, at night and in good visibility, a Boeing 737-800 (EI-8AS) being operated by Ryanair on a scheduled international passenger flight from Malta to Birmingham as FR3902 touched down on runway 33 at destination and the crew did not see any obstruction on the runway. Two minute later, another Boeing 737-800 (G-GDFR) being operated by Jet2 on a scheduled international passenger flight from Chania to Birmingham as LS1244 touched down on the same runway and, on clearing the runway, reported to ATC that they has seen either an object or an abnormal paint marking within the runway touchdown zone. The crew of a third aircraft, a Boeing 757-200 (G-OOBA) being operated by Tui Airways on a scheduled international passenger flight from Antalya to Birmingham as BY755 and two minutes behind the Jet 2 flight, had heard the report of the previous aircraft and were asked if they wished to continue their approach and stated that they would. Touchdown occurred two minutes later and when vacating the runway, the crew reported that they had seen a large object, possibly a ladder, on the runway in the TDZ just to the right of the centreline. The runway was closed and the ladder located and recovered and reopened after a full runway inspection had found no more objects. The three aircraft involved were undamaged and had a total of 426 occupants on board. 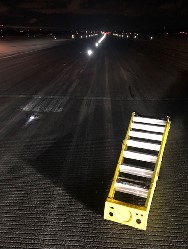 The ladder as found close to the runway 33 centreline and 500 metres past the threshold. [Reproduced from the Official Report]

A Field Investigation was carried out by the UK AAIB. It was noted that the airport had SMR and that all vehicles used airside were fitted with transponders to allow ATC to identify each vehicle and its position on the TWR display but that the system installed was not intended to facilitate the detection of FOD.

It was established that the first report to ATC that there might be something in the TDZ was from the crew of the second aircraft to land who reported that they may have seen something in the TDZ but were unsure if it was an object of some sort or a paint marking on the runway. On hearing this, the crew of the first aircraft to land had then commented that “they may have also possibly seen something” just after the aiming point marks in the TDZ. The TWR controller therefore asked the crew of the third aircraft “if they were happy to continue given the reports from the two previous aircraft”.

The Investigation noted that the local ATC procedures manual required that if it has been decided that a Special Runway Inspection Procedure (SRIP) should be carried out as in the case of a report of possible FOD, only approaching aircraft within 4nm (such as the third aircraft in this event) may continue to a landing. The procedures manual was found to require that the controller must transmit to such an aircraft “request your intentions?” with this question being deliberately open so as not to influence the crew in their decision. However, it was found that the controller had actually transmitted “are you happy to continue?” to which the crew had responded that they were.

It was noted that although the Tower VCR affords a comprehensive view of the airport manoeuvring area, at night the effectiveness of this view is restricted even in good visibility simply because of darkness so there was no possibility that the presence of the ladder would have been discovered without either a positive sighting from an aircraft passing near to it or a runway inspection.

The two man maintenance team involved had, after completing their initial task to inspect the runway 33 approach lighting, which had required the use of the step ladder they had placed in the back of their pickup truck secured with a bungee, driven the full length of the runway to inspect the centreline and edge lighting was all functioning normally. With the vehicle at a speed calculated to have been travelling at around 45 mph, the bungee retention of the ladder, which was in any case overhanging the load area (see the illustration below), failed and the ladder was deposited on the runway approximately 500 metres past the threshold. The vehicle did not pass this point again and after later leaving the runway was twice captured on CCTV footage without the ladder being on board. 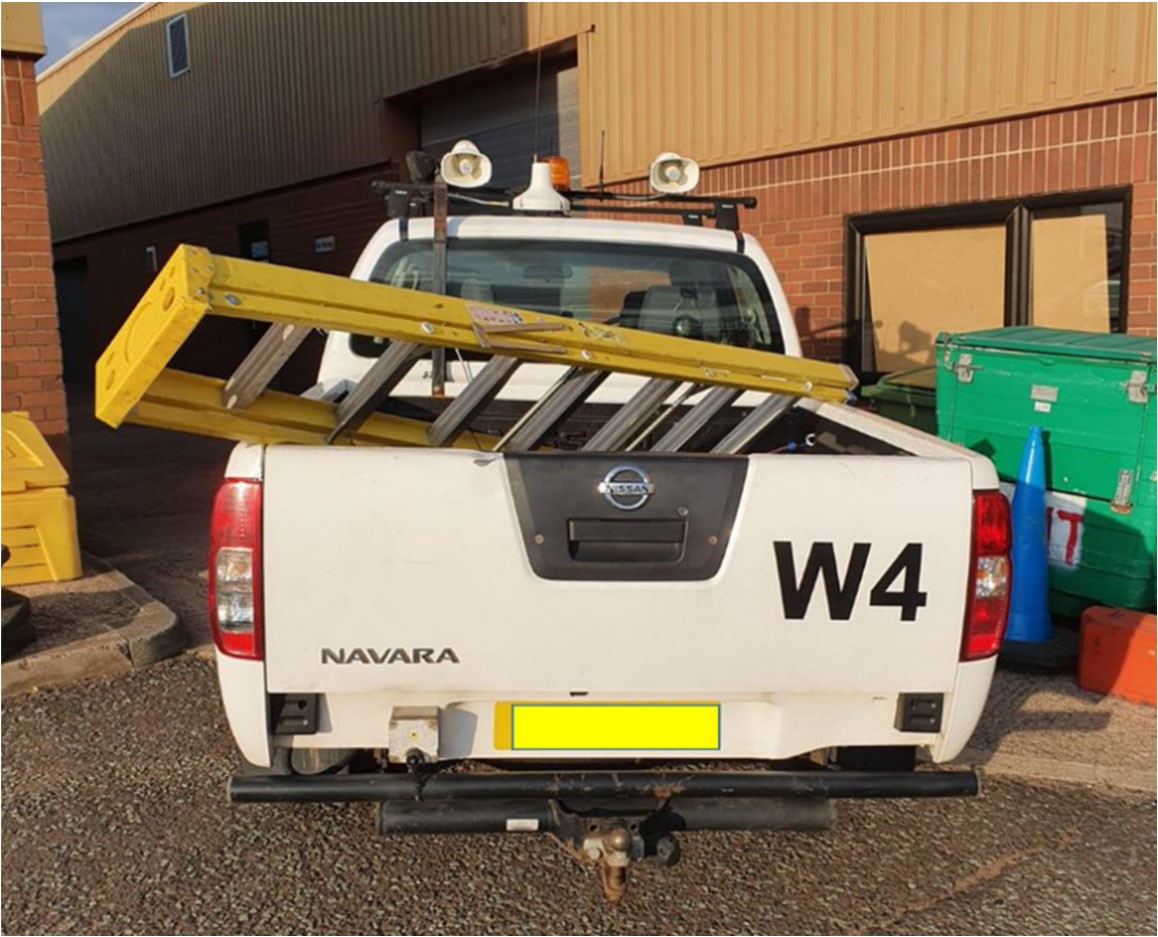 The ladder as loaded onto the vehicle involved. [Reproduced from the Official Report]

Having completed the inspection, the vehicle was then driven back along the runway to the first of a series of centreline lights (No 104) which had to have the torque on their securing bolts checked. The torque wrench to be used for this task was a Bluetooth-equipped electronic version which indicated to the user when the correct torque was applied and simultaneously transmitted these data to a mobile device which recorded corresponding time and time of the work. On attempting to use the wrench, it was discovered that the Bluetooth connection could not be achieved and so the team left the runway and drove to the maintenance base “in order to get it to work as required”.

The two technicians involved stated that on reaching the maintenance base, one of them had left the vehicle and had been quickly able to get the wireless connection to work. They returned to the vehicle a couple of minutes later and, with ATC permission, returned to the runway to resume their work checking centreline light security, again beginning at light number 104. After about 15 minutes, ATC advised that the next inbound aircraft was 20nm from touchdown so they exited the runway and returned to the engineering base to establish when runway access would again be possible and having been told this would be after the next landing aircraft - the 757 - they returned to their vehicle and for the first time noticed the ladder was missing. 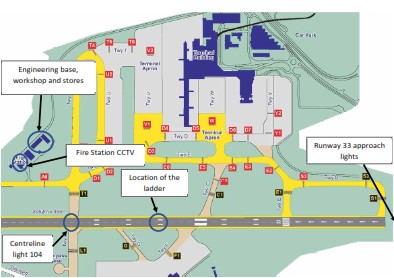 An annotated extract of part of the aerodrome diagram. [Reproduced from the Official Report]

They stated that they initially “thought was that the ladder had been borrowed and proceeded to drive to where they thought the person who might have the ladder was working” but had then found that “this person was not working that night”. Before they could do anything else, they received a call from the Airport Duty Manager regarding the ladder that had been found on the runway. The first of the three aircraft did not land until 26 minutes after the vehicle had initially cleared the runway which was 37 minutes after the ladder had fallen from the vehicle.

It was considered that given the position where the ladder was found and the main and nose landing gear track width of all three aircraft, each had “narrowly missed the ladder”. It was further considered that had the ladder been struck by the main or nose landing gear directly following touchdown, is likely that this would have caused the break-up of the ladder and consequently “a high risk of an explosive tyre burst”. Such an explosion would “probably have resulted in high energy fragments hitting the aircraft, thus damaging the airframe or exposed vulnerable hydraulic and electrical components in the landing gear bays” with a nose landing gear impact introducing the additional risk that the "nose gear would collapse and the resulting debris be ingested into an engine”. However, whilst there was no evidence to indicate that any of the three aircraft had hit the ladder, its position in relation to the track of the nose and main landing gear wheels meant that during all three landings, the clearances involved must have been minimal if touchdowns had been made on the centreline.

It was considered that, given the on-frequency comments of the first two aircraft after their landings and the language then used by the controller to communicate with the third larger aircraft, it is likely that both they and the crew of this aircraft did not believe the possible object to be of significance with “the overriding impression seeming to be that it was just paint or a marking on the runway”. As observed, the language actually used by the controller was not as intentionally prescribed and in relation to their perception of the risk that existed, the crew of the third aircraft subsequently commented that the language used “re-enforced the impression that there was nothing to be concerned about (which) together with the belief that it was probably paint, led to their decision to continue to land”.

It was observed by the Investigation that having been specifically warned to look out for something in the touchdown zone, the crew of the third aircraft sighted an object and were able to correctly identify it as a ladder. The fact that the crews of the two preceding aircraft had not been able to confirm the presence of an obstruction, as opposed to suspecting they may have seen something unusual could reasonably be attributed to the fact that they would have been concentrating their attention on the touchdown and the speed of the aircraft at that point.

The UK CAA as safety regulator was asked to provide data from the MOR system involving FOD on the runway at UK airports and only one other event where a ladder was found on a runway was included and their investigation of the event concluded that in this case, the steps involved were dropped from a departing aircraft. Other reports of large items found “in the runway environs” included a pallet and a hay bale produced during grass cutting. None of these events had led to any reported aircraft damage but the data provided did include “numerous” reports of items from airside engineering and operations being dropped or left on runways or taxiways, although all of these events involved small items such as “screwdrivers, wrenches, mobile phones and handheld radios”.

The ladder fell from WV4 during the drive along the runway, at the point where it accelerated in the touchdown zone after the end of the supplementary lights. The means of securing the ladder in the rear of the open back vehicle using a bungee was not suitable. The bungee was available for use within the maintenance organisation’s facility, but its provenance was not known. More suitable securing equipment was available although not readily to hand.

Safety Action taken or intended to be taken by the airport operator in response to this event prior to the completion of the AAIB Investigation was noted to have included the following:

The Final Report of the Investigation was published on 25 February 2021. No Safety Recommendations were made.