On 7 October 2014, a locally-based Boeing 737-800 taxiing for departure from runway 34 at Dublin as cleared in normal night visibility collided with another 737-800 stationary in a queue awaiting departure from runway 28. Whilst accepting that pilots have sole responsible for collision avoidance, the Investigation found that relevant restrictions on taxi clearances were being routinely ignored by ATC. It also noted that visual judgement of wingtip clearance beyond 10 metres was problematic and that a subsequent very similar event at Dublin involving two 737-800s of the same Operator was the subject of a separate investigation.

On 7 October 2014, a Boeing 737-800 (EI-EMH) being operated by Ryanair and taxiing for departure on a scheduled passenger flight from Dublin to Edinburgh (RYR 812) was involved in a collision in normal night visibility with a stationary Boeing 737-800 (EI-EKK) also operated by Ryanair and on a scheduled passenger flight from Dublin to Charleroi (under R/T callsign RYR 65ND) and in a queue of aircraft awaiting departure from a different runway. Both aircraft sustained substantial airframe damage but there were no occupant injuries. Passengers were disembarked from both aircraft prior to further movement under tow.

An Investigation was carried out by the Irish AAIU. Both aircraft remained in their post impact positions until further movement was authorised by the Inspector in Charge. Both the Flight Data Recorder (FDR) and Cockpit Voice Recorder (CVR) from both aircraft were removed and their data were successfully downloaded. Relevant ATC recordings, including that from the ASMGCS, were also available.

It was established that both aircraft had taxied towards their respective departure runways in (early morning) night conditions whilst surface visibility was being reported as 3000 metres in mist. The CVR record from both aircraft portrayed a sterile and unrushed environment on the flight decks of both aircraft. An audible "thump" could be clearly heard on the area microphone channel of the CVR from the moving aircraft but no such sound was recorded on that channel of the CVR from the stationary aircraft. The FDR for the former showed that the ground speed of the aircraft at the time of the impact had been approximately 5 knots. The FDR for the latter confirmed that the aircraft had been stationary with the park brake set at the time of impact. The impact caused extensive damage to the port winglet of the moving aircraft and to the starboard elevator of the stationary aircraft and both had to be replaced.

Aircraft departures were being permitted on two runways, 28 and 34, which was a routine practice during the busy period between 0630L and 0800L subject to Visual Meteorological Conditions (VMC) and ASMGCS serviceability. All 34 departures were made from TWY A without a backtrack. The relevant part of the manoeuvring area is shown on the diagram below. The first aircraft was initially cleared by GND to taxi for a runway 28 departure via F5/LINK 5 to hold short of LINK 5 and then further cleared to TWY E1 via the F taxiways to hold short of both runways. The aircraft was subsequently instructed to monitor TWR frequency and, having begun to do so, was then stopped on LINK 2 just before entering TWY F1. Shortly afterwards, the second aircraft, with the Captain necessarily acting as PF because a steering tiller is only available on Ryanair aircraft at the left hand seat position, followed the first aircraft in sequence but was to depart from runway 34. It was cleared by GND to route via LINK 5 onto the F taxiways and onto TWY A to hold short of runway 34. As the aircraft was approaching LINK 2, GND instructed the aircraft to continue as cleared and monitor TWR. As the aircraft turned right onto LINK 2 and taxied towards TWY A, the left winglet struck the outer part of the right elevator of the other aircraft. The approximate position of both aircraft at and in the case of the moving aircraft the position where it stopped after the collision is shown on the second diagram below. 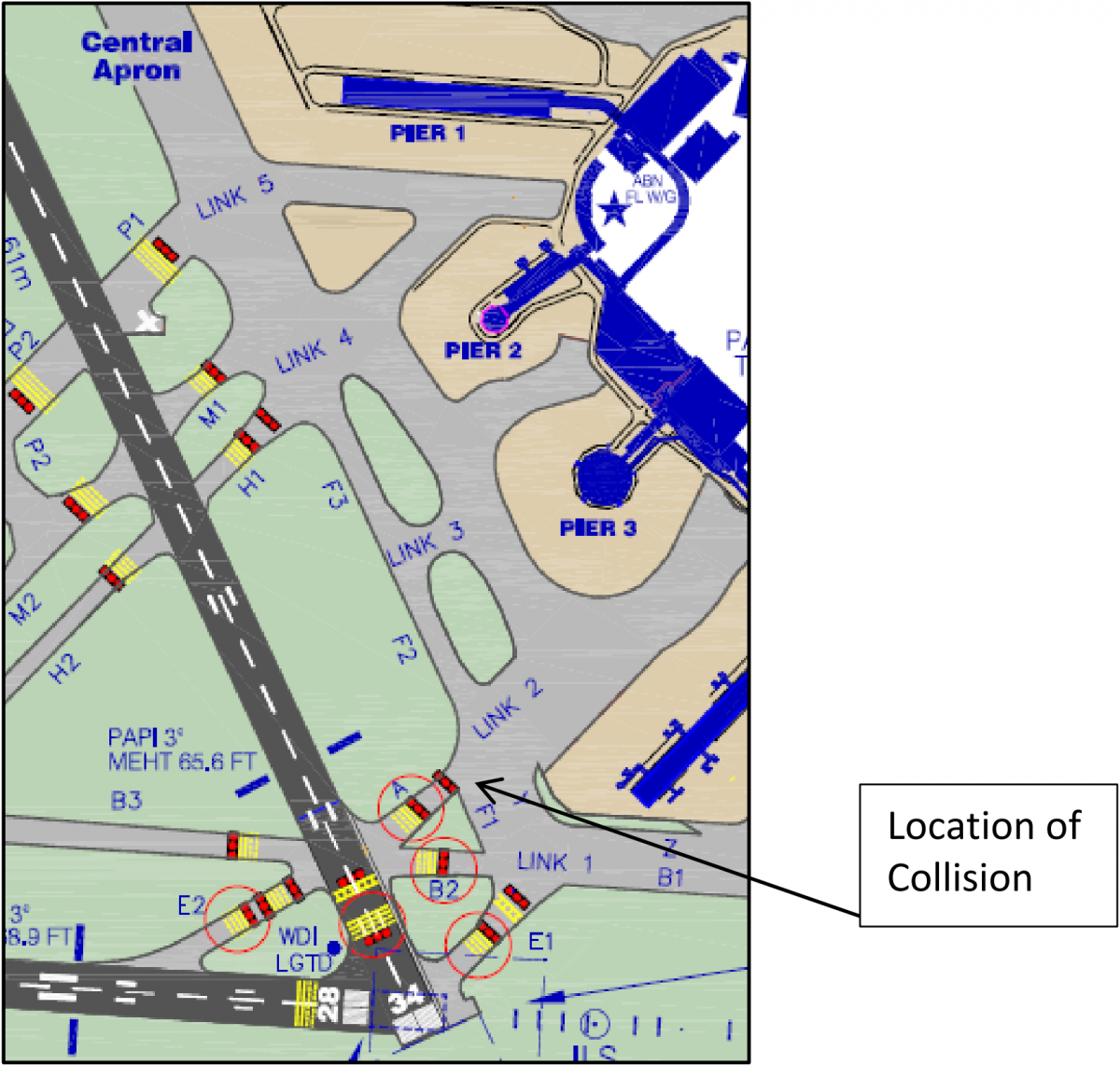 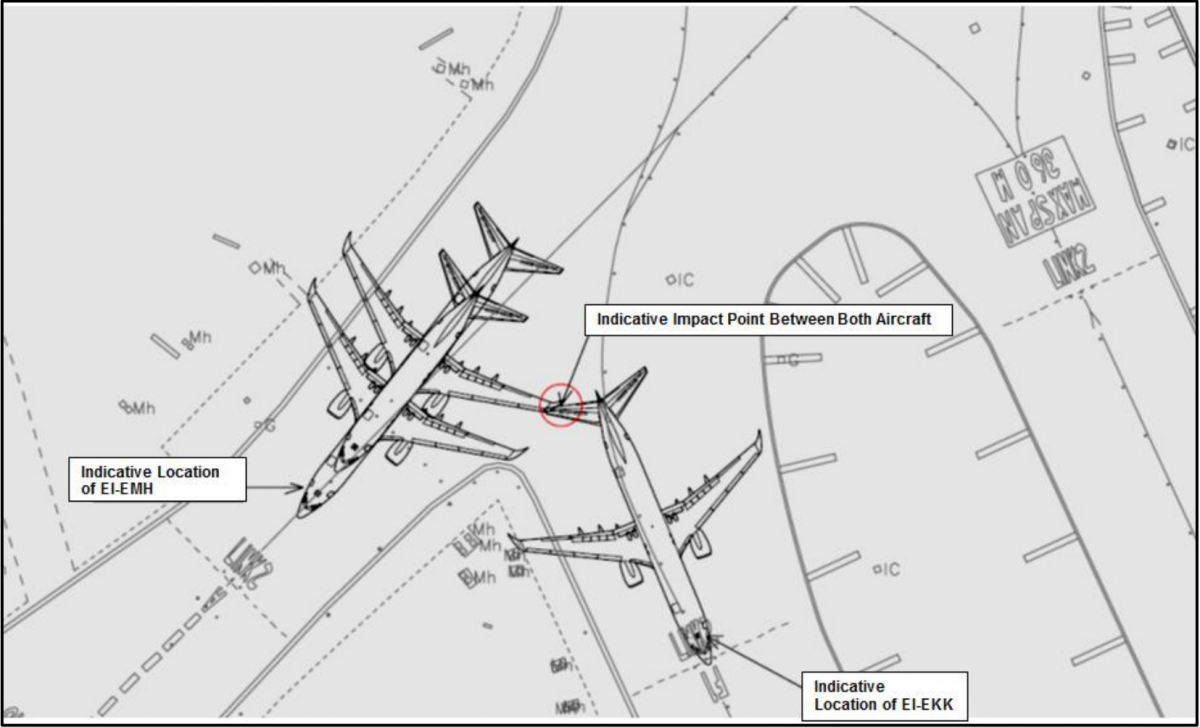 The Captain of the second aircraft stated that he had seen the other aircraft parked ahead at F1 and had considered that there was sufficient separation from it to enable continued taxiing in accordance with the clearance given. He stated that whilst "monitoring the wingtip through the rear port cockpit window, which had rain droplets on it (although) it was not raining at the time, he "felt a jolt and said to his First Officer that he thought he had tipped the other aircraft" and therefore stopped the aircraft. When TWR cleared the aircraft to line up on runway 34, they were advised of the collision.

It was recognised by the Investigation that "prevailing conditions of morning darkness, rain-drop covered cockpit windows and diffused high-level ramp lighting were not conducive for judgement of accurate absolute distance or separation at close quarters between two aircraft".

The GND controller stated that when he had cleared the second aircraft along the F taxiways and onto LINK A to hold short of RWY 34, "He did so in the expectation that (the first aircraft) would not stop on TWY F1 and so (regarded) the clearance (as) both safe and efficient". However, he reported that he had been monitoring the movement of the first aircraft using the ASMGCS and "was confident that everything was operating smoothly". He added that prior to reconfirming the clearance to the second aircraft and transferring it to TWR, he had noted the first aircraft was still moving ahead. Subsequently, he heard the TWR controller saying that "there had been a collision on LINK 2 between two aircraft" and immediately realised which aircraft would have been involved. He noted that whilst "every effort was made to fully comply with" the extensive taxiing restrictions, when aircraft are queuing, "it is not possible to fully implement such restrictions without serious implications for traffic flow and efficiency".

In respect of the use of ASMGCS, the Investigation noted that its returns "do not specifically ‘paint’ the extremities of the aircraft wings or wingtips, but rather display a circle (which is the aircraft transponder position) and primary radar returns in the form of a collection of boxes." In respect of AIP-promulgated taxiing restrictions, the Investigation noted that there were a total 16 based on different scenarios. One of these was identified as explicitly prohibiting aircraft movement from LINK 2/TWY F2 when aircraft travelling towards LINK 1/ TWY E1 were holding on TWY F1 which was the case at the time of the collision.

The Investigation reviewed the history of the F1 taxiway which had until 2010 been a direct continuation of F2 but at that point had been moved to the west and joined by the parallel taxiway Y with both accessed via a complex chicane system at each end. The effect of this redesign, which had produced the layout and taxi restrictions in place at the time of the collision, was to reduce the length of taxiway F1 to 20 metres. It also had the effect of reducing the distance prior to the beginning of F1 for an aircraft stopping clear of it when approaching from LINK 2 to less than that required to provide sufficient clearance for a 737-800 or a larger wingspan aircraft to pass behind when moving from LINK 2 to TWY A. It was noted that "visiting foreign pilots regularly sought additional routing information from ATC when taxiing within the vicinity of LINK 1/LINK 2" and that even pilots regularly using and therefore familiar with the LINK 1/LINK 2 taxiway system considered it "to be complex and that the designations are confusing compared to other airports".

In respect of the taxiway design where the collision occurred, it was noted that previous (2012) AAIU Safety Recommendations which proposed that the Dublin Airport Authority should "review taxiway designation at Dublin Airport" and give "consideration (to) the alignment of taxiways F1 and F2" had, although accepted at the time, not been fully implemented. However, since progress in this regard was continuing, it was determined that no further recommendations in this specific respect were necessary. However, it was considered that a wider and general review of the whole taxiway system at the airport was required.

It was noted that ICAO Annex 11 prescribes that an ATC Unit "shall issue clearances and information for the purpose of preventing collisions between aircraft under its control" and that ICAO Annex 14 states that "taxiways should be provided to permit the safe and expeditious surface movement of aircraft" and refers to the Aerodrome Design Manual (ICAO Doc 9157) which says that "taxiway routes should be as simple as possible in order to avoid pilot confusion and the need for complicated instructions". In this respect, it was noted that on 1 April 2015, whilst the current Investigation had been in progress, a further very similar ground collision had occurred at the same location at Dublin and that as a consequence of that separate Investigation, an Interim Safety Recommendation had been issued to the IAA as Safety Regulator to ensure that the existing Taxiing Restrictions specified for Dublin in the AIP "are restated". The case for "a critical review of the taxiing restrictions at Dublin Airport should be undertaken" with the aim of reducing their number and facilitating the simplification of taxi instructions.

The question of how effective visual assessment of wingtip clearance from a pilot seat in the aircraft type involved was considered. It was found that this was only possible at all if the pilot concerned took up a seating position which would take their "visual attention away from the straight ahead view" and even then provided only a partially obstructed view. Further consideration of this matter focussed on depth perception. It was concluded from reference to medical research that judgement of clearance is likely to be unreliable when the target of interest is greater than 10 metres away whereas the 737-800 wingtip is approximately 27 metres from the required flight deck viewing position. The following general position was taken in respect of the risk posed by visual assessment of wingtip clearance:

"The Investigation is of the belief that for pilots operating winglet equipped aircraft and/or aircraft with large wingspan, it is not possible to accurately judge absolute distance between the wingtip and another object. Therefore, regardless of experience, there is a risk that in attempting to judge separation distance at close quarters to another object, a collision may occur. As such pilots should err on the side of caution and if doubt exists as to whether an aircraft can be passed safely, the flight crew should stop, advise ATC, and request alternative instructions if available."

The attention previously given to the case for wingtip proximity aids by the National Transportation Safety Board (USA) (NTSB) was noted as was the Federal Aviation Administration (FAA) response to related Safety Recommendations which declined to act, which was followed by a similar response from European Aviation Safety Agency (EASA).

It was noted that at the time of the investigated event, there had not previously been a collision in the area of LINK 1/2 at Dublin although there had been 3 wingtip collisions involving commercial transport aircraft in Ireland since 1996 and 8 others involving Irish-registered aircraft operating abroad.

The Probable Cause of the Serious Incident was determined as "Insufficient wing-tip clearance achieved while manoeuvring in close proximity to another aircraft".

Safety Action following sight of a draft copy of the Investigation Report was noted as including the following:

The Final Report of the Investigation was published on 9 October 2015.